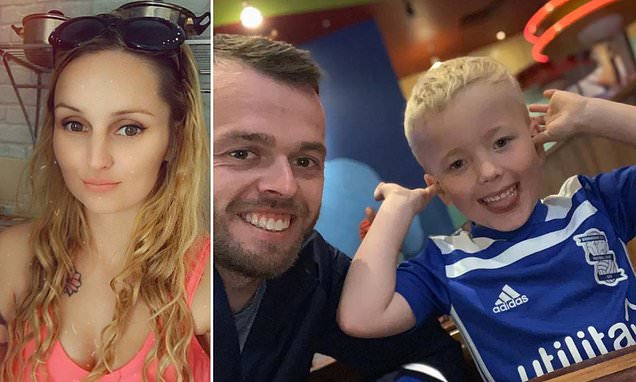 A boy who was allegedly murdered by his ‘bullying’ dad and stepmother suffered brain injuries equivalent to those of motorway crash victims, a court heard.

Arthur Labinjo-Hughes, six, died with ‘unsurvivable brain injuries’ after allegedly suffering months of abuse, including being poisoned with salt.

It is claimed Emma Tustin, 32, and Thomas Hughes, 29, subjected Arthur to systematic cruelty ‘designed to torture’, including forcing him to stand on a step for 14 hours a day.

Emma Tustin (pictured), 32, and Thomas Hughes, 29, are said to have subjected Arthur to systematic cruelty ‘designed to torture’ the youngster

They deny murder and multiple counts of child cruelty.

Coventry Court Crown today heard details of brain injuries that Arthur sustained after allegedly being attacked by Tustin at their home in Shirley, near Solihull, last June.

The brain and spine scan expert said: ‘I’ve seen injuries of this nature in a girl who got out of car, walking down a dual carriageway and was hit by a passing car at somewhere between 50 and 70mph.

‘I remember a child who had sadly been involved in a car crash on M6 where a car had rolled and the car seat had become detached, and so the child had tumbled in the car seat. 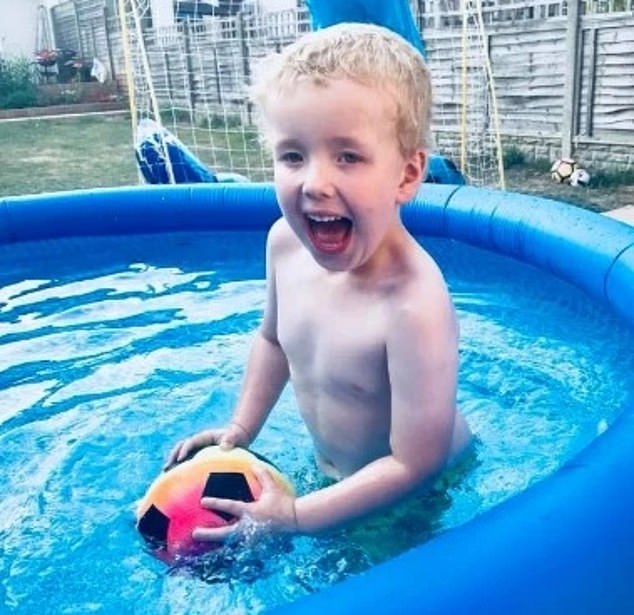 Arthur (pictured) was allegedly deprived of food, made to stand in a hallway for 14 hours a day and poisoned with salt before being killed at his home near Solihull, West Midlands

‘I remember a child in a high speed accident – they weren’t in their car seat, so they suffered a significant and catastrophic head injury.

‘In accidental settings that the level of energy that’s required to cause this degree of brain disruption.

‘Sadly by far the most common reason why I see catastrophic brain injury in children is not because of accidental trauma, it is because of inflicted trauma.

‘It’s because of children being shaken.’

Prof Stivaros, who analysed scans of Arthur’s brain before he died on June 17 last year, said bleeding was discovered in ‘multiple different locations’.

Bruising consistent with ‘bangs to the head’ was also seen on hospital scans.

Asked by Jonas Hankin, QC, prosecuting, if Arthur’s injuries must have been ‘necessarily violent’, Prof Stivaros said: ‘Yes. However you want to describe it – violence, outside the realms of normal handling – the sort of force you only encounter in an accidental setting due to high speed or a fall from height. 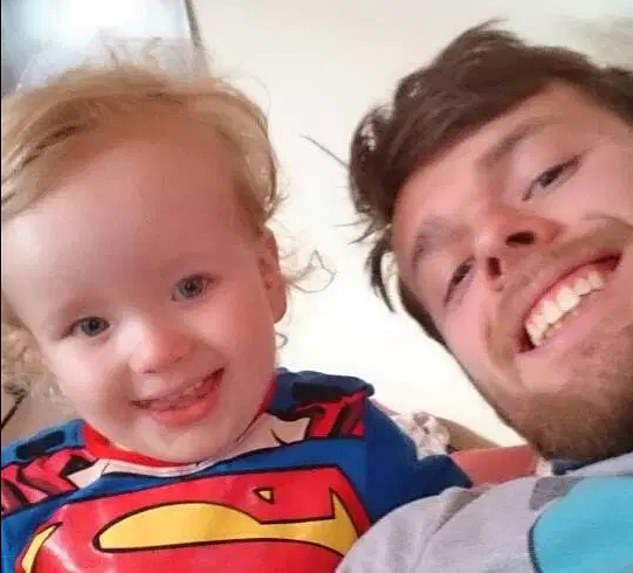 ‘It’s outside what a child would come into contact with on a day-to-day basis, even outside an accidental injury in the home or garden.’

After Arthur was found unresponsive, Tustin claimed his head injuries were self-inflicted. The court heard how she claimed he had ‘banged his head while on the floor on all fours’.

But Prof Stivaros, of Royal Manchester Children’s Hospital, said in evidence: ‘It is inconceivable to me that such a high-energy action could be self-inflicted by a child’s own physical actions alone.’

‘It’s inconceivable that he could have done that.’

Prof Stivaros said Arthur died after injuries caused his brain to swell and be starved of oxygen.

He explained: ‘Sadly you will reach a tipping point where the cells in the white matter cannot survive and they start to die. That’s what we saw in Arthur’s case.’

Paramedics were called to the family home on June 16 last year. They restarted Arthur’s heart and rushed him to Birmingham Children’s Hospital.

He died the following day.

Prosecutors allege Tustin murdered the youngster and that Hughes ‘intentionally encouraged’ the killing. 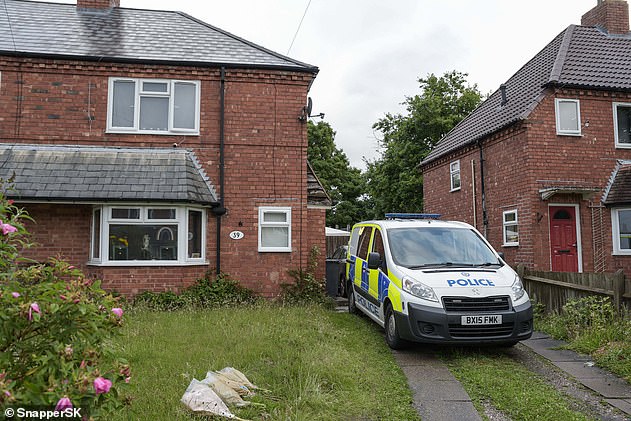 In June last year, Hughes allegedly told a neighbour in Solihull (above): ‘If you hear anyone saying ‘don’t kill me’, ignore it, I’m not hurting him.’

She allegedly carried out the fatal assault and fetched her phone immediately afterwards to photograph the boy as he lay dying in the hallway. Jurors were last week played a 999 call made by Tustin 12 minutes after prosecutors claim she assaulted him in a hallway.

In the frantic call, Tustin told the operator that Arthur was ‘barely breathing’ and had ‘lost colour’ after banging his head ‘on the floor about five times’.

After being told to take a ‘deep breath’ by the call handler, Tustin continues: ‘We’ve been having a little bit of trouble with him for the last couple of months.

She then added: ‘Obviously I’ve seen the lump on his head, he’s done to himself. It’s a big bang, he’s knocked himself out.

‘He is breathing but he’s barely breathing.’

Prosecutors allege the youngster was subjected to a ‘campaign of cruelty’ which matched the ‘medical definition of child torture’. The court heard how he spent more than 14 hours ‘segregated and isolated’ in a hallway and was made to sleep on a living room floor.

In one message, Hughes threatens to ‘take his jaw off his shoulders’ and tells Tustin: ‘Just gag him or something. Tie some rope around his mouth with a sock in it or something.’

Opening the trial, Mr Hankin said: ‘Both defendants participated in a campaign of cruelty intended to cause Arthur significant harm and suffering. 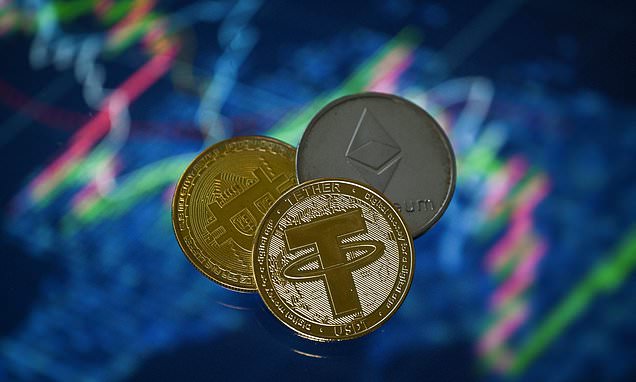 Not-so-stable coin: Why have stablecoins crashed and what does it mean for cryptocurrencies?Stablecoins are a type of cryptocurrency tied to real-world assets  An algorithmic stablecoin, TerraUSD, saw its value plung... 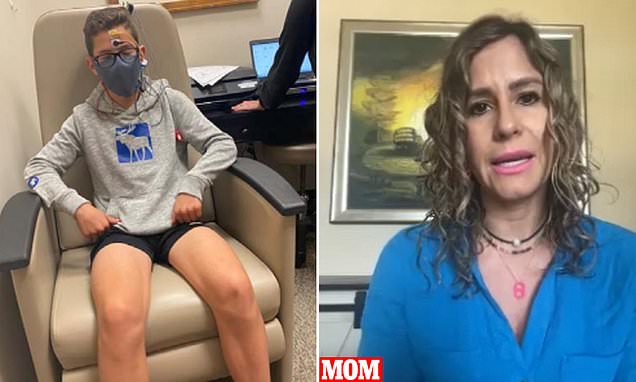