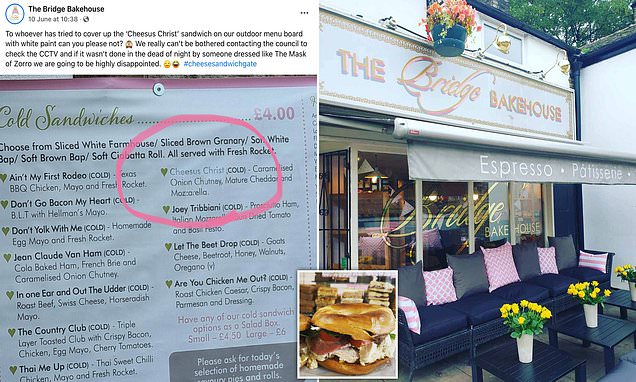 A bakery was threatened by an angry customer with legal action after it named a £4 sandwich ‘Cheesus Christ’.

The mystery seething sandwich-eater sent a letter to The Bridge Bakehouse in Whaley Bridge, ダービーシャー, saying there was ‘clearly a case to answer’ for ‘discrimination against Christians’ over the name for the cheddar cheese and mozarella sandwich which comes with onion chutney.

The bakery prides itself on its pun abilities, with other sandwiches on the menu earning entertaining names such as roast beef, swiss cheese sandwich with and horseradish mayonnaise called ‘In one ear and out the udder’; ‘Joey Tribbiani’ – which has ham, mozzarella, sun-dried tomato and pesto and a BLT sandwich called ‘Don’t go bacon my heart’.

The letter writer claimed to have intervened over the ‘Cheesus Christ’ sandwich name on the request of the local Holy Trinity church, and Christian organisation Christian Concern.

Dated June 23, と言いました: ‘the slant on the name Jesus Christ is an insult to Christianity and is seen in the eyes of the law as discrimination against Christians.’

続きました: ‘Although our clients would prefer to settle this matter outside of the court, there is clearly a case to answer here. 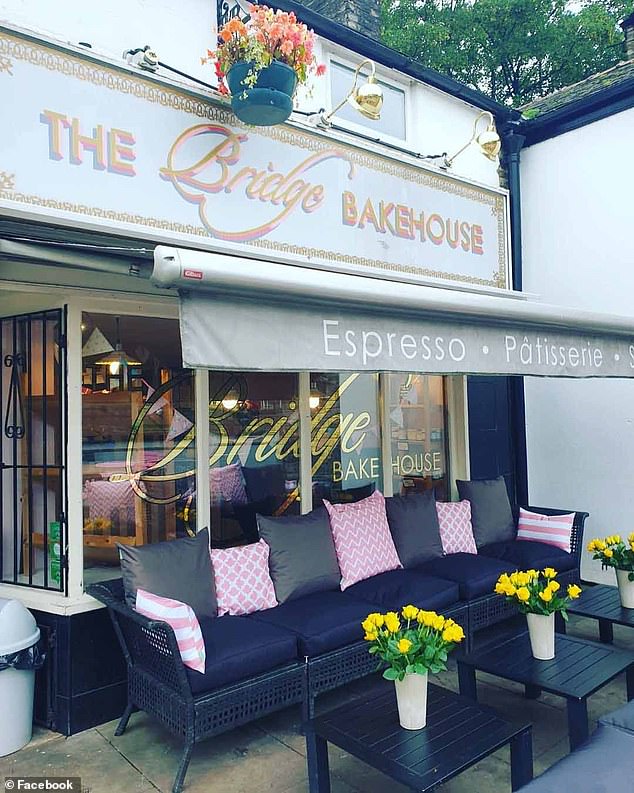 The Bridge Bakehouse in Whaley Bridge, Derbyshire received the letter this week, 6月付け 23 – but have since found out it was a fake 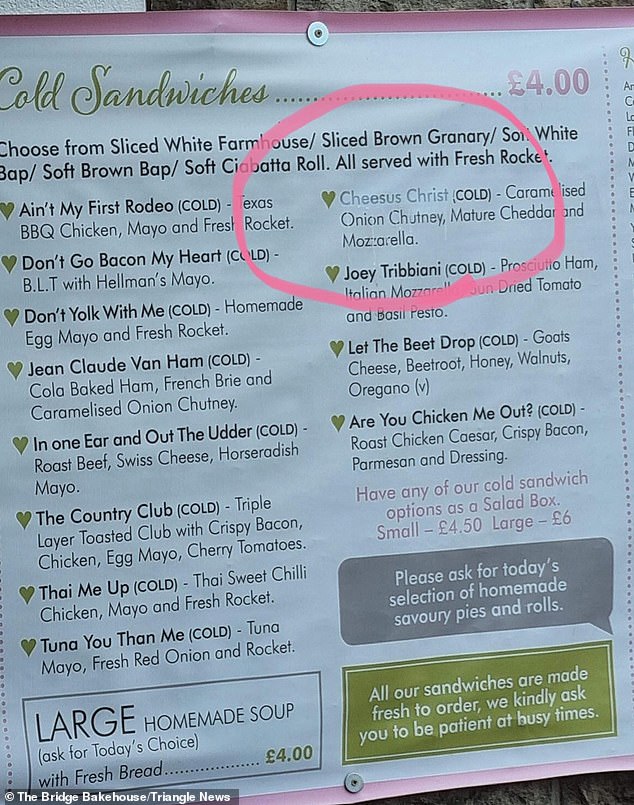 The bakery posted a photo of their damaged menu on social media, highlighting the Cheesus Christ sandwich and said someone had attempted to paint over the sandwich’s name on its menu in white 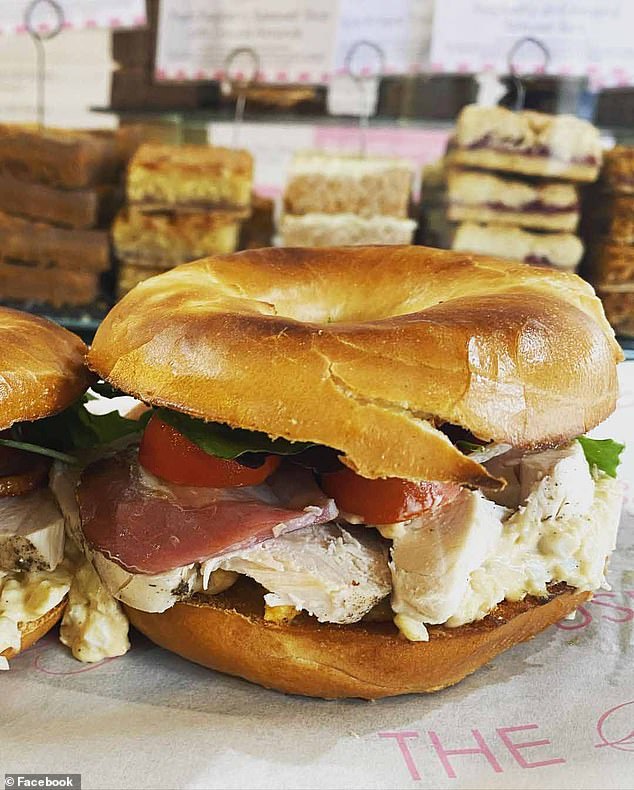 The Bridge Bakery has a long menu of hot and cold sandwiches, including the Cheesus Christ which remains on the menu (写真 – another sandwich offered by the bakery) 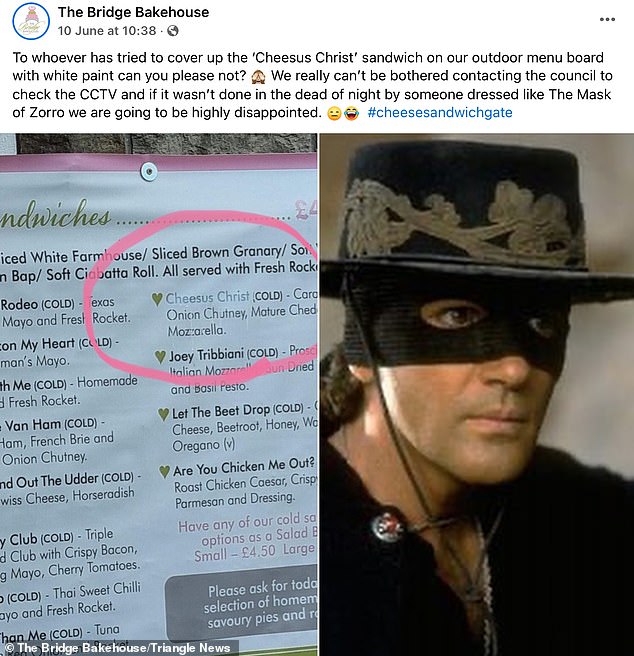 ‘Our clients do not wish to take this further, but feel they will need to in the name of Jesus Christ our lord and saviour if action is not taken.’

The letter also demanded the bakery make a public apology, remove the sandwich from the menu and make a £300 donation to the village church in Whaley Bridge.

The writer of the letter, who claimed to represent ‘clients’ within the local Christian community – described them as ‘good standing citizens’.

But the bakery said the letter was later revealed to be fake and had nothing to do with the local church or Christian Concern.

In an Instagram story the bakery wrote: ‘So after investigations it turned out the bizarre blackmail letter had nothing to do with Trinity Church or ‘Christian Concern’.

‘We would still love to find out who it was(!) and if they had anything to do with the recent vandalism of our menu board?!’

Earlier this month The Bridge Bakehouse’s menu was vandalised as someone attempted to paint over the name of the offensive sandwich in white to hide it from view. 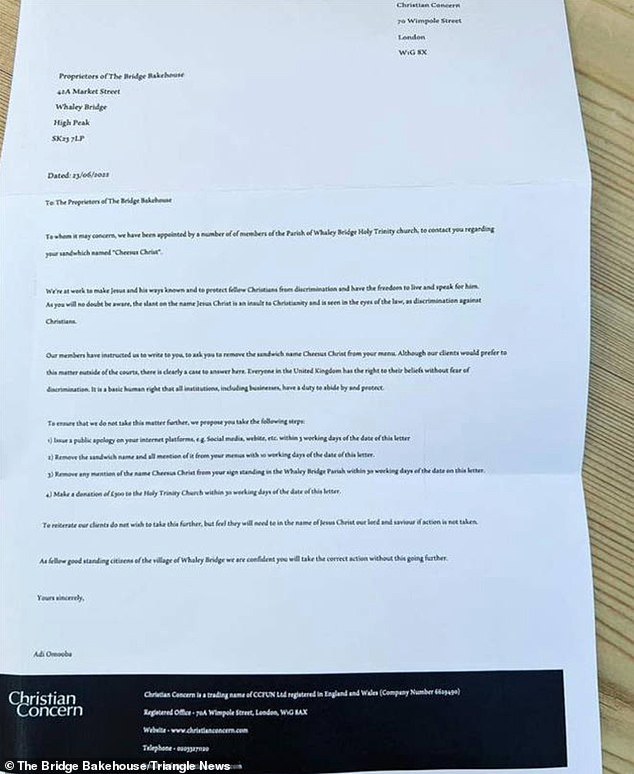 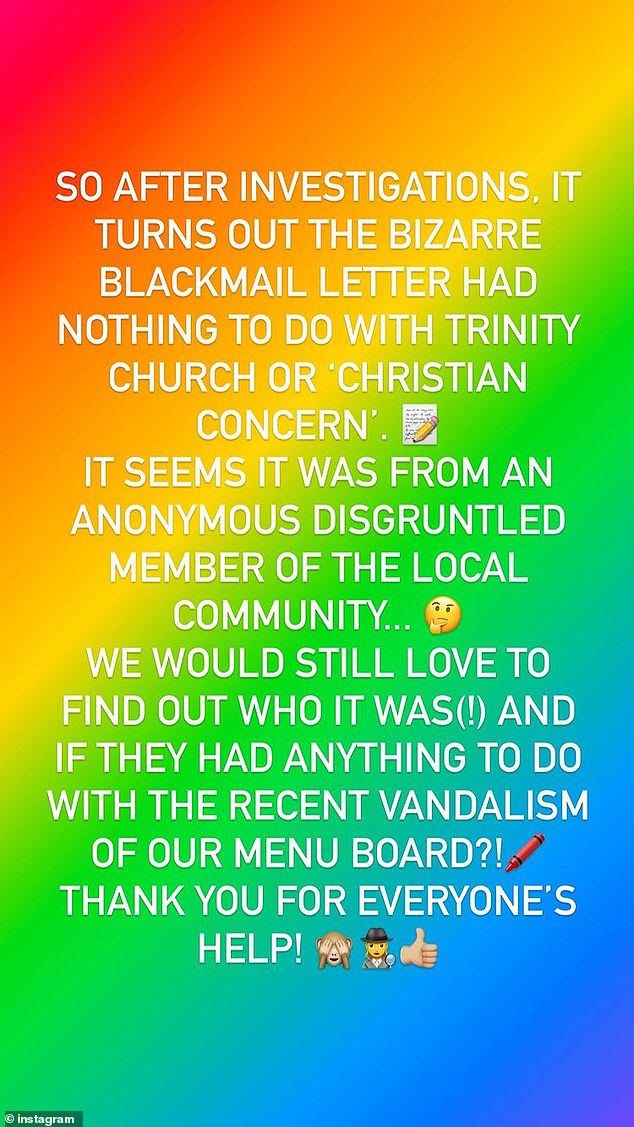 Despite being on the menu since at least last September, the anonymous vandal didn’t strike until now.

The bakery announced the news that the letter is a fake on its Instagram account last night, adding they still want to find the person responsible.

When the angry customer defaced their menu on 10 六月, the bakery took to Facebook to call them out – but appeared good humoured about the incident.

と言いました: ‘To whoever has tried to cover up the ‘Cheesus Christ’ sandwich on our outdoor menu board with white paint, can you please not?

‘We really can’t be bothered contacting the council to check the CCTV.

‘And if it wasn’t done in the dead of night by someone dressed like The Mask of Zorro we are going to be highly disappointed.’

The strongly worded letter, supposedly from the religious organisation Christian Concern, which was received by the Bridge Bakehouse in Derbyshire read:

To the proprietors of The Bridge Bakehouse,

To whom it may concern, we have been appointed by a number of members of the Parish of Whaley Bridge Holy Trinity church, to contact you regarding your sandwich named ‘Cheesus Christ’.

We’re at work to make Jesus and his ways known and to protect fellow Christians from discrimination and have the freedom to live and speak for him. As you will no doubt be aware, the slant on the name Jesus Christ is an insult to Christianity and is seen in the eyes of the law as discrimination against Christians.

Our members have instructed us to write to you to ask you to remove the sandwich name Cheesus Christ from your menu. Although our clients would prefer to [解決] this matter out of the courts, there is clearly a case to answer here. Everyone in the United Kingdom has the right to their beliefs without fear of discrimination. It is a basic human right that all institutions, including bakeries, have a duty to abide by and protect.

To ensure that we do not take this matter further, we propose the following steps:

1. Issue a public apology on your interest platforms, 例えば. ソーシャルメディア, website etc within 5 working dats if the date of this letter.

2. Remove the sandwich name and all mention of it from your menus within 10 working days of the date of this letter.

3. Remove any mention of the name Cheesus Christ from your sign standing on the Whaley Bridge Parish within 30 working days of the date on this letter.

4. Make a donation of £300 to the Holy Trinity Church within 30 working days of the date of this letter.

To reiterate our clients do not wish to take this further, but feel they will need to do so in the name of Jesus Chrsit our lord and saviour if action is not taken.

As fellow good standing citizens of the village of Whaley Bridge we are confident you will take the correct action without this going further. 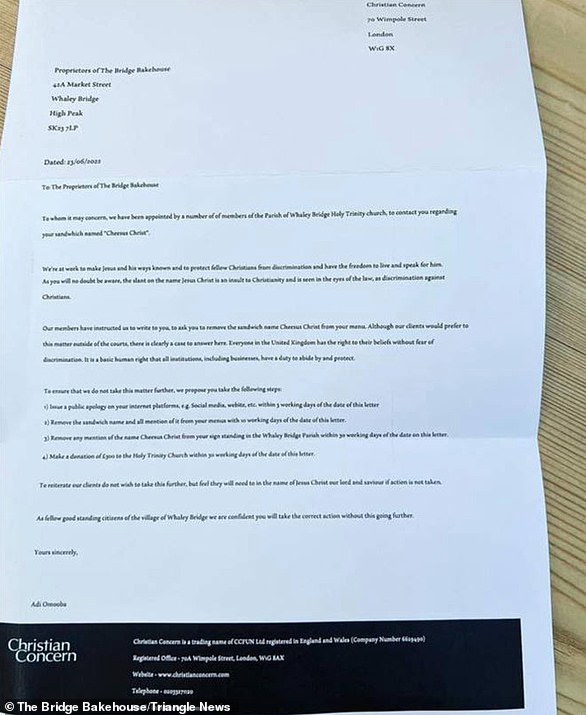 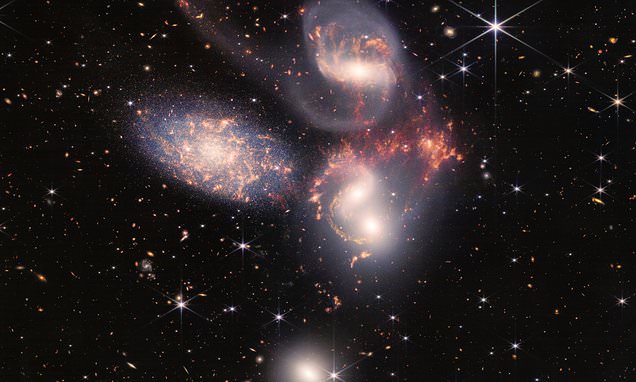 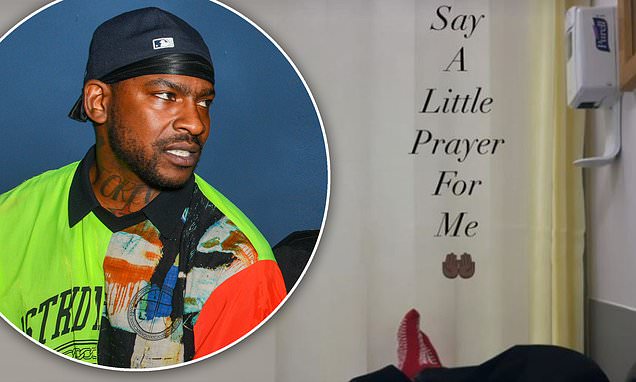