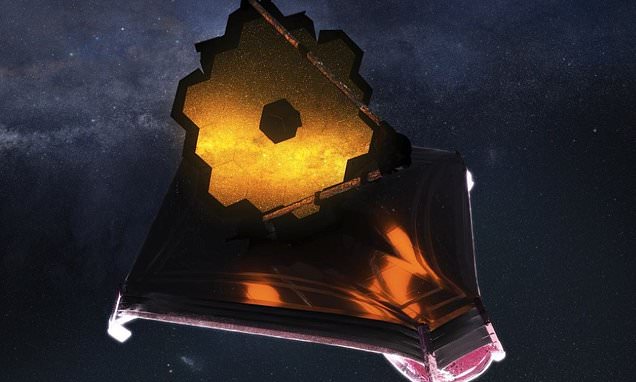 The James Webb Space Telescope will point its mirror at ‘Super Earth’ exoplanets, and hot rocky worlds – as these are planet types not found in the solar system.

Also known as JWST, the tennis court-sized telescope launched on Christmas Day from the European Space Agency (ESA) facility in French Guiana, finally arriving at its destination a million miles from Earth on January 24.

Webb will now spend the next six months cooling down and being calibrated, with each of the 18 individual mirror segments ‘perfectly aligned’.

Once this is finished, a significant portion of its first year of observations will be turned over to examining exoplanets – worlds orbiting distant stars.

Among the first projects will be a study of 11 ‘super-Earths’, that is planets that sit somewhere between Earth and Neptune in size.

These are important objects for observation, as none of them are found within our own solar system, but they are relatively common elsewhere in the Milky Way.

The James Webb Space Telescope will point its mirror at ‘Super Earth’ exoplanets, and hot rocky worlds – as these are planet types not found in the solar system

This comes as NASA confirmed photons of starlight have entered the telescope for the first time, detected by the Near Infrared Camera instrument.

This is the first major milestone in capturing the first unfocused images, that will be used to finely tune the instrument and the telescope as a whole – over three months.

The Webb telescope has a 21ft mirror, making it the largest space-based observatories ever launched, and will study the universe in infrared.

As well as delving back and looking at the first stars to form after the Big Bang, at distant black holes, and young stars, Webb will turn its camera to exoplanets.

These alien worlds come in a surprising array of styles, sizes and make-up – including many not found in the solar system.

‘In our solar system, we have the inner rocky worlds and outer gas planets — but the most common exoplanets we see are actually in between,’ she said. 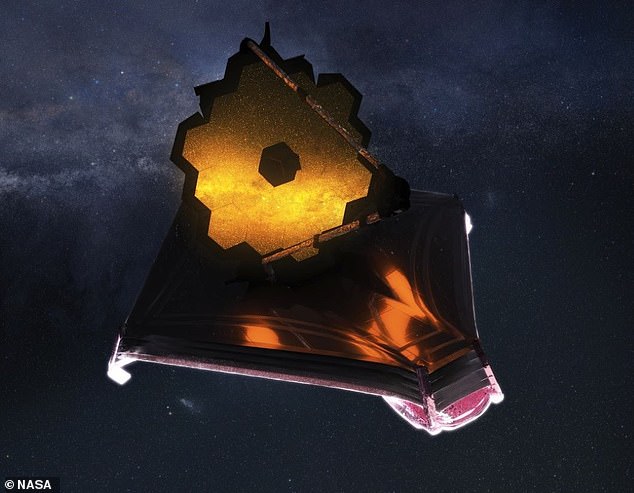 Also known as JWST, the tennis court-sized telescope launched on Christmas Day from the European Space Agency (ESA) facility in French Guiana, finally arriving at its destination a million miles from Earth on January 24

The first target of the NASA James Webb Space Telescope is a sun-like star in the Great Bear constellation, but it is just to check the mirrors are properly aligned.

The $10 billion telescope is months from being ready to begin operations, despite arriving at its final orbit on January 24, as it has to cool down and undergo weeks of calibration work, to ensure the 18 segments of the main mirror ‘work as one’.

After reaching its orbit, at the second Lagrange point (L2), an area of balance between gravitational forces of the Earth and the sun, NASA revealed its first target.

‘While it will be too bright for Webb to study once the telescope is in focus, it’s a perfect target for Webb to gather engineering data & start mirror alignment.’

When asked whether the images from this alignment process would be released to the public, a European Space Agency (ESA) official told DailyMail.com: ‘All calibration data will be made public at the end of commissioning.’

Batalha and colleagues at Ames will be among the first to observe the cosmos with Webb, and they’re looking for clues about how exoplanets form, what they’re made of, and whether any could be potentially habitable.

The telescope reached its destination, a location known as the Sun-Earth Lagrange point 2 (L2), on January 24, and has started its calibration process.

When looking for exoplanets, astronomers use the worlds we know from the solar system as a reference, but most planets don’t appear to be like those nearby.

‘In between’ worlds, that aren’t large gas worlds, and aren’t small rocket planets like Earth, will be studied by Batalha and her team to learn how they formed.

Experts from Ames will also look at the general population of exoplanets visible using Webb – to get an idea of how they form, whether they are habitable, whether they are rocky or gas giants – a series of puzzle pieces to put together.

Thomas Greene, an astrophysicist at Ames has contributed to the development of Webb’s instrumentation and analysis techniques for over 20 years.

He is leading a study using Webb to examine nine planets that are less massive, and cooler than any studied by previous, smaller telescopes.

it will focus on the chemical makeup of the atmosphere surrounding these worlds, looking at the abundances of heavier elements compared to their host stars.

Another type of planet that is in need of further study are small rocky worlds in orbit around cool dwarf stars.

This is an interesting topic for study, according to the astronomers, as these planets are often very close to their star – and, as the star is smaller and cooler than the sun they still lie within the habitable zone, where liquid water can flow on the surface.

Little is known about these worlds, including whether they can maintain an atmosphere or harbor life – given the intense radiation from its host star.

Most of the world’s he plans to study are made of gas, but one is a rocky world – known as TRAPPIST-1b, the innermost planet in the TRAPPIST-1 system.

This is a group of seven rocky, roughly Earth-sized planets in orbit close to a small, cool dwarf star. 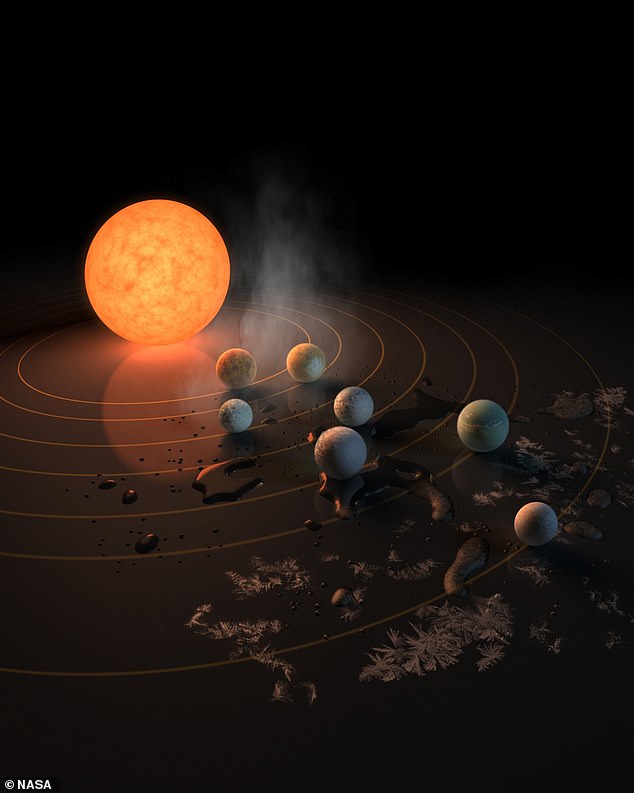 Webb will now spend the next six months cooling down and being calibrated, with each of the 18 individual mirror segments ‘perfectly aligned’

‘With so little known about the makeup of the planet, including if it has an atmosphere or not, the data gathered by Webb could reveal it to be a dead and barren world, or even one with the potential for hosting life,’ the team said.

‘A planet’s atmosphere is essential for the possibility of life as we know it,’ said Greene. ‘We’ve developed Webb’s instruments to be able to give us the data we need to not only detect atmospheres, but to determine what they are made of.’

They plan to take a closer look at the spectrum of the planet, which will show the light it emits and give a view into its chemical composition.

It will look at the infrared emissions from the planet, which should allow them to look for signs of carbon dioxide.

If they find carbon dioxide, it suggests the planet could have formed and evolved like the rocky planets in the solar system as they have carbon dioxide.

As part of her rocky world study, Batalha will contribute to a pair of programs focusing on five similar rocky worlds – including two in the TRAPPIST-1 system.

Those programs will determine how many of those worlds have atmospheres, and if they do, what they are made of and whether they could be habitable.

Some of these planetary targets are hundreds or light years away, but one target is practically on our doorstep, in the Proxima Centauri system.

This is the star system closest to our own, just over four light years away, made up of a red dwarf star and may be home to two worlds.

The Webb telescope is the largest astrophysical space observatory and the most technically complex science mission NASA has ever built.

‘It’s a humbling experience to be part of such a massive endeavor,’ said Batalha.

‘About 10,000 people have contributed to this telescope, and thousands more across over 400 institutions will be analyzing data from its first cycle. It’s an amazing opportunity to get to do science on this scale.’

Primarily an infrared telescope, it will have a wider spectrum view than Hubble and operate further out from the Earth, in a solar orbit, rather than an Earth orbit.

Research by Ohio State University claims that within five years of it coming online, James Webb will have found signs of alien life on a distant world.

The telescope will be used to look back to the first galaxies born in the early universe more than 13.5 billion years ago.

It will also observe the sources of stars, exoplanets, and even the moons and planets of our solar system.

The James Webb Telescope and most of its instruments have an operating temperature of roughly 40 Kelvin.

Officials from the space agencies responsible for the telescope say the cost may exceed the $8 billion (£5.6 billion) program cap set by Congress.

NASA has already poured $7 billion (£5 billion) into the telescope since it was first proposed as a replacement for the long-running Hubble space telescope.

When it is launched in 2021, it will be the world’s biggest and most powerful telescope, capable of peering back 200 million years after the Big Bang.

James Webb is designed to last for five years but NASA hopes it will operate for a decade or more, although due to its distance from Earth it can’t be easily repaired.

It is 66 ft by 46 ft and will operate at the Sun-Earth Lagrange point about 930,000 miles from the Earth – almost four times further out than the moon.

The telescope is set to launch on a European workhorse Ariane-5 rocket at the end of October 2021, with the first observations expected in 2022.