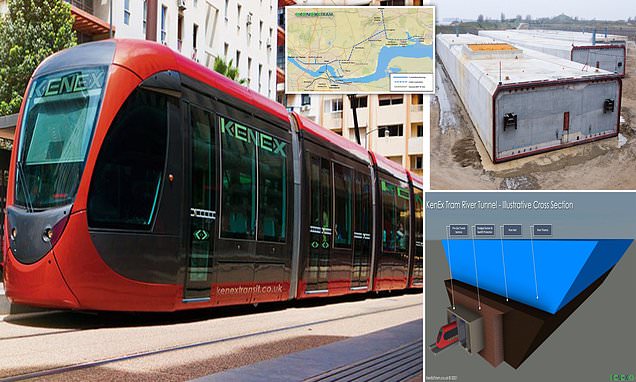 Plans have been unveiled for a new £800million ‘sustainable’ tram network connecting Kent to Essex – which avoids the congested Dartford Crossing with a mile-long tunnel under the River Thames.

The tram network is estimated to wipe out 10 per cent of traffic off roads in the area, while it would cost just a fraction of proposals for the multi-billion pound Lower Thames Crossing.

Trams would run initially run between Purfleet-on-Thames and Grays in Essex to Ebbsfleet and Gravesend in Kent, with the majority of the track above ground.

But at the heart of the project is an immersive tunnel that would be built into the Thames riverbed using pre-cast sections.

The project, which is said to have the backing of local council leaders, aims to create a ‘sustainable public transport infrastructure’ and an ‘integrated and enhanced local economy never enjoyed before by communities either side of the Thames’.

Pictures released this week show how the new tram would operate, as well as a map and diagrams of how the tunnel would be built under the river. 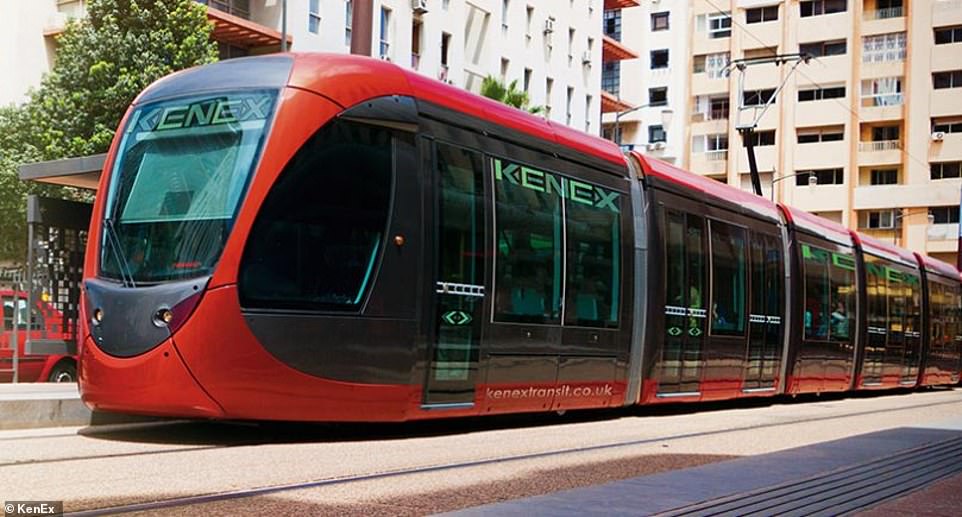 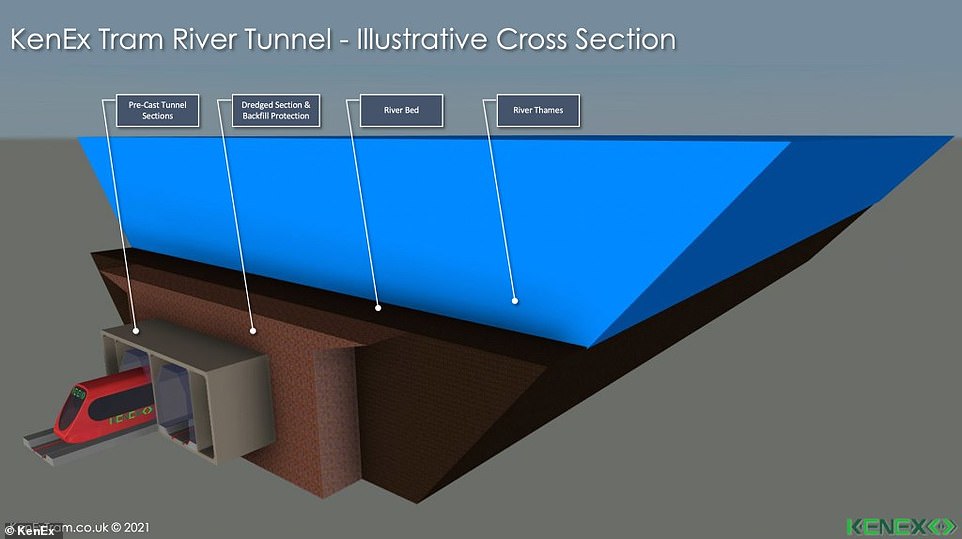 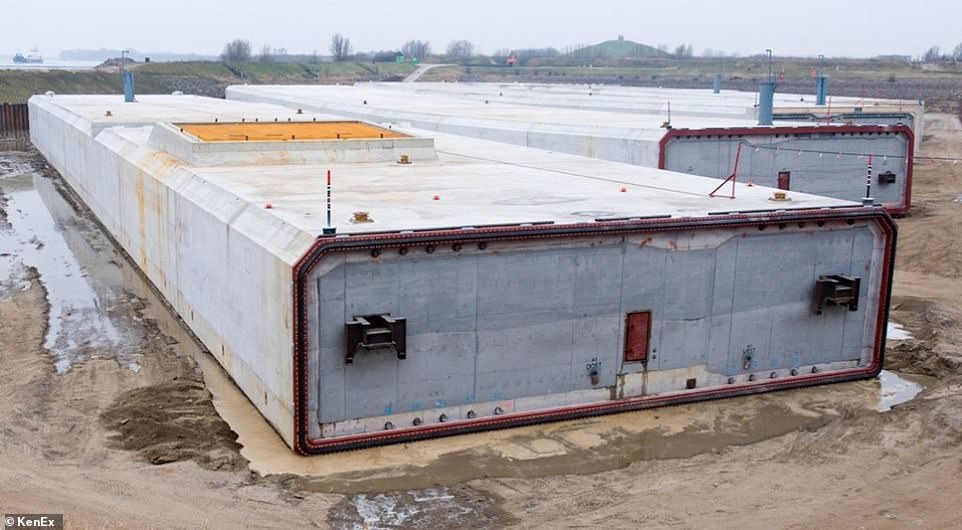 The tunnel would be constructed by utilising ‘existing cutting edge light rail technology’ to construct the tunnel, drawing upon ‘proven immersed tunnel technology’ 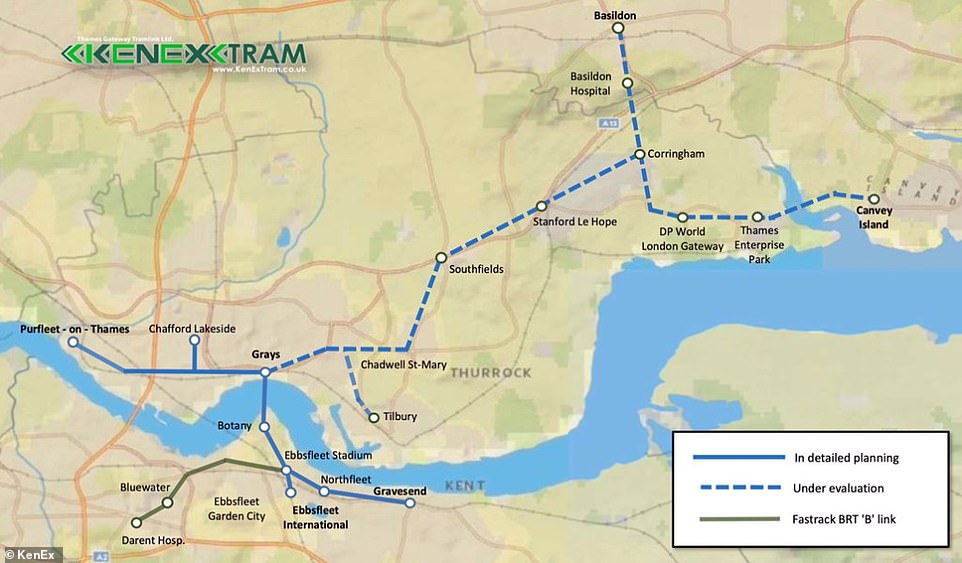 The popular Bluewater shopping centre is also among the sites that have been earmarked, as well as Darent Hospital and Ebbsfleet Garden City.

In Essex, meanwhile, the majority of potential stations are to the east of Grays – including with Tilbury, Chadwell St Mary and Southfields.

Stanford Le Hope,  DP World London Gateway, Thames Enterprise Park, Canvey Island, Corringham, Basildon Hospital and Basildon are all ‘under evaluation’ to see if they will form part of the network.

Visits have already been undertaken to establish its feasibility, but ‘actual construction designs and site details are not due for some time yet’.

A statement from Thames Gateway Tramlink says: ‘Crossings along this part of the River Thames have always been important. Ferries have provided a local link for people for hundreds of years and a ferry still operates today.’

It adds: ‘Surveys support the need for an efficient local transport solution to enable the movement of people for work, education, health and leisure.

‘We have identified the cross-river transport need together with health benefits for local communities and benefits to the local economy.

‘A tram solution meets the expected current and increasing demand from the local area with an environmentally sound solution that helps towards a goal of “Net Zero” emissions.’ 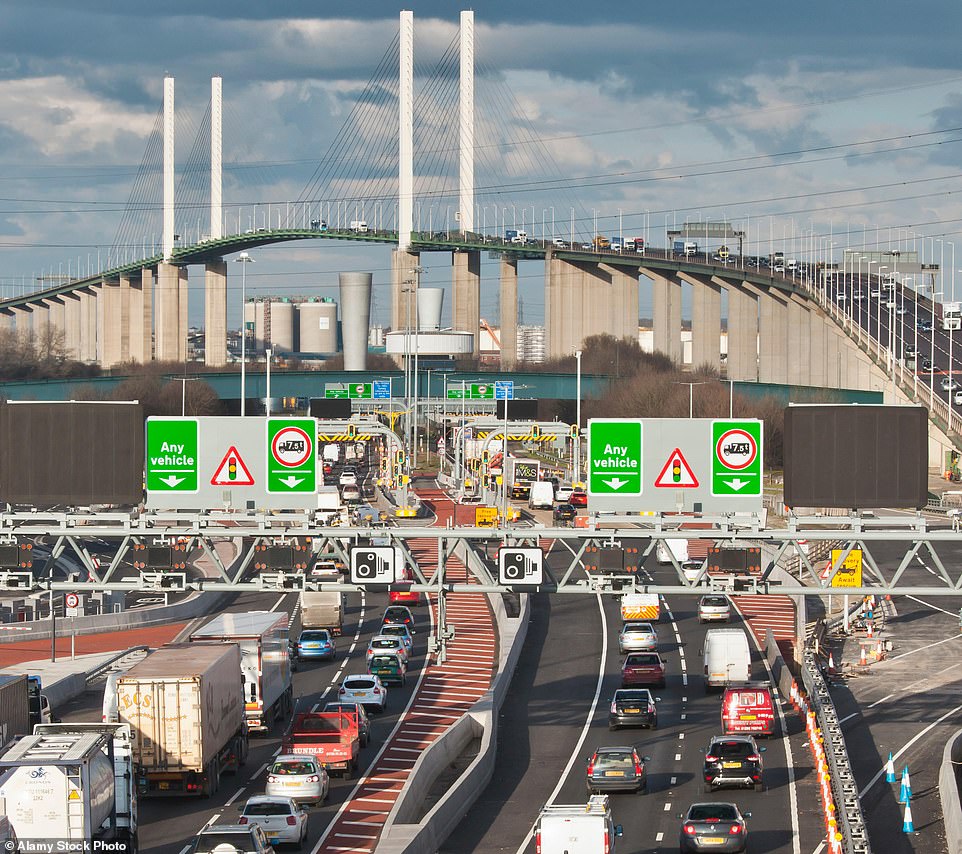 The Dartford Crossing, with vehicles queuing to access the Dartford Tunnel with the Queen Elizabeth II Bridge pictured in the background

Plans for a new transport links to connect Kent and Essex have been in the pipeline for years.

The Dartford Tunnel opened in 1963 to provide crossing facilities before the Queen Elizabeth II bridge was constructed to provide additional capacity from 1991.

However, the M25 and local roads still become backlogged with traffic and local residents have long called for more to be done to tackle the issue.

A consultation is currently ongoing over the Lower Thames Crossing which, if approved, would become Britain’s longest road tunnel.

It is designed to almost double road capacity across the Thames to the east of London, connecting disparate communities, reducing delays and providing more reliable journeys.

A number of slip roads would also be redesigned to improve safety at junctions and make the project more visually appealing, while one lane southbound between the M25 and A13 junction would be removed to reduce the amount of land required.

The consultation is due to conclude on June 20 before an application for a Development Consent Order is submitted. 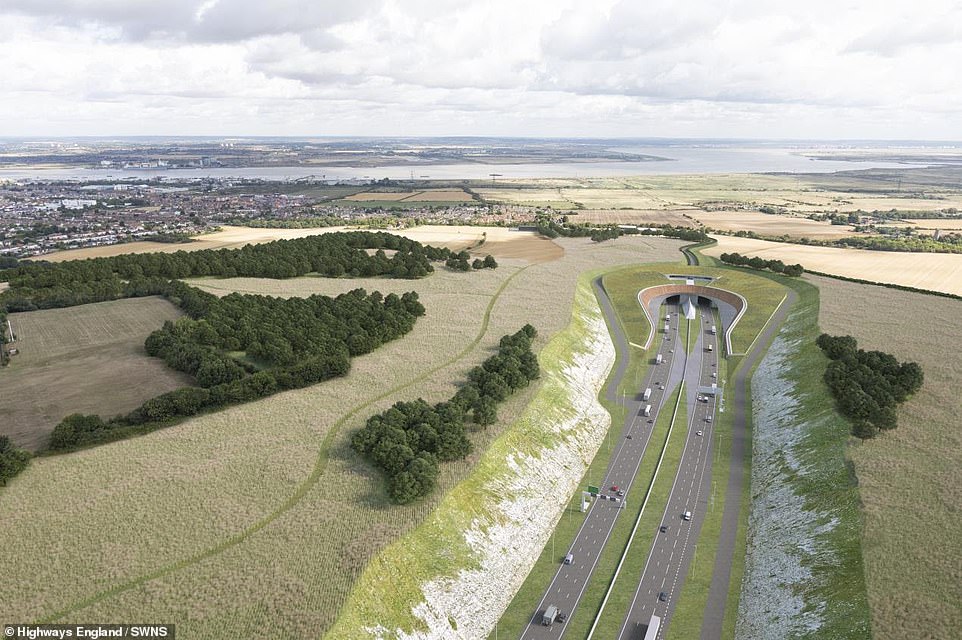 The southern entrance to the Lower Thames Crossing, in Kent, part of a a proposed multi-billion pound project to improve traffic in the area 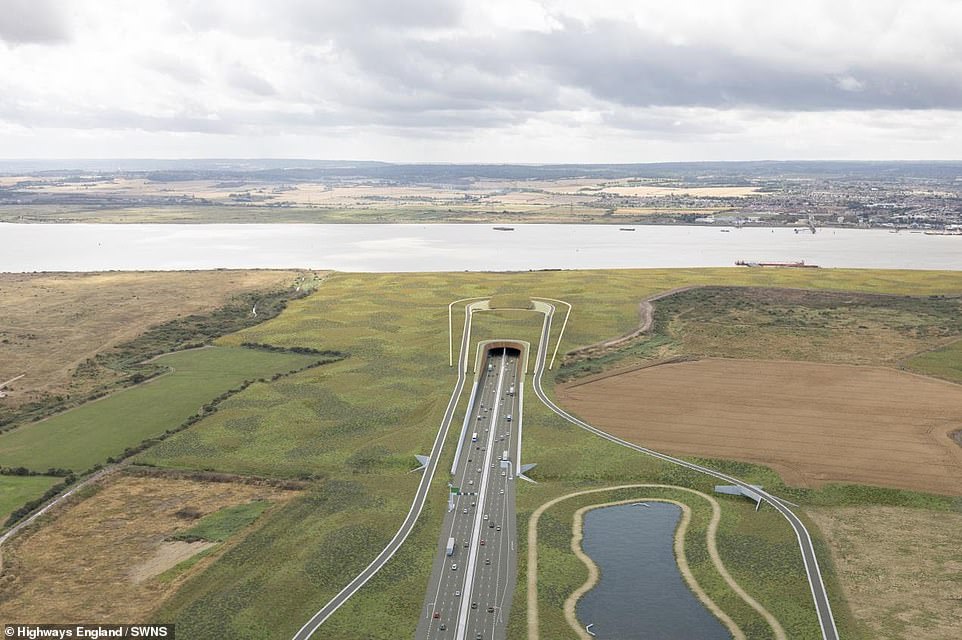 If given the green light, the Lower Thames Crossing would become Britain’s longest land tunnel, though an alternative proposal for trams has now been put on the table

Matt Palmer, Executive Director for the Lower Thames Crossing, said: ‘There is a pressing need to tackle congestion at the Dartford Crossing which causes delays and unreliable journeys for tens of thousands of people every day.

‘The Lower Thames Crossing will be a vital piece of the UK’s transport infrastructure, not only by providing a reliable alternative to Dartford, but by driving the economy by bringing people closer to jobs and businesses closer to their customers.

‘These consultations are crucial in helping us get the design right; to reduce the impact on local communities and environment, but also give the most benefit to local communities. I’d like to thank you for your patience, and for taking the time to look at our plans and give us your feedback.’ 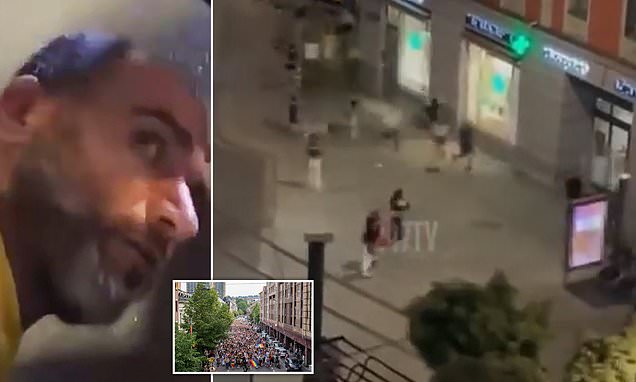 Revealed: Iranian refugee turned 'terrorist', 42, 'who killed two in Islamist attack' on Oslo gay bar after coming to Norway when he was 12 - as video shows clubbers fleeing for their livesTerror suspect named as Ira... 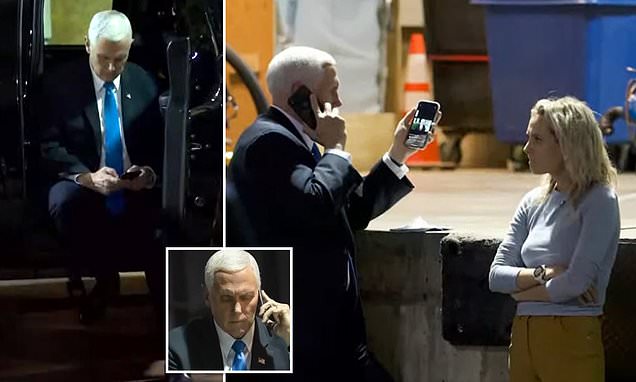 PICTURED: Pence in a secure location during January 6 Capitol attack

PICTURED: Mike Pence in a secure location under the Capitol after telling Secret Service he didn't want rioters to see him 'fleeing' - as Proud Boys say they would have killed him if they found himThe House select co... 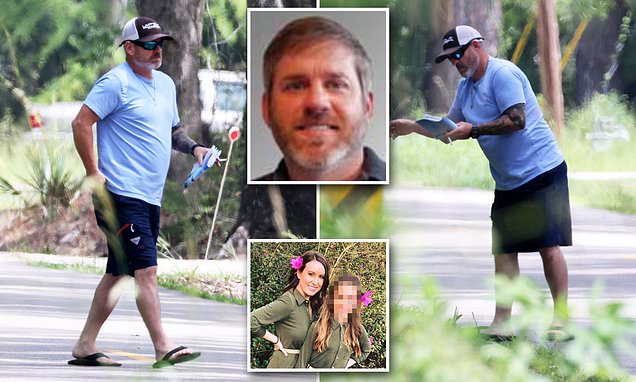 EXCLUSIVE: Accused rapist who gained custody and later awarded child support of the daughter – now 15 – conceived with his 'victim' when she was underage is pictured for the first time at his Louisiana homeWeb design... 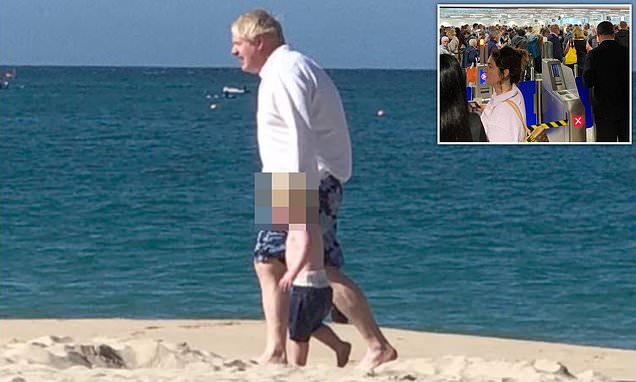 PICTURED: Boris Johnson walks hand-in-hand with son Wilfred, two, as he and Carrie escape UK airport chaos and enjoy a family holiday in CornwallBoris Johnson pictured on Devon and Cornwall beaches as travel chaos re...