What cost of living crisis? Boris Johnson and Rishi Sunak WON’T be hit by soaring energy bills that could leave six million families facing disaster this Spring – because the amount they pay at their grace-and-favour homes is ‘capped’

Boris Johnson and Rishi Sunak will escape soaring energy bills causing misery for millions this spring because of a ‘cap’ on contributions to their grace-and-favour homes.

The PM and the Chancellor are only liable for a ‘benefit in kind’ to cover heating and utilities at the official residences in Downing Street where they live rent-free.

And the value of the benefit is limited to a maximum of 10 per cent of their ministerial salary – meaning they only pay a few thousand pounds a year towards the bills at the properties.

The boon can be revealed amid fears that six million households could be left struggling to heat their homes with energy prices on track to spike by more than 50 per cent in April.

It will heap pressure on Mr Johnson and Mr Sunak to come up with a way of easing the pain for families as rampant inflation in the wake of the pandemic sparks a cost of living crisis.

The PM’s spokesman said today that ‘discussions are still ongoing’ with Mr Sunak and Business Secretary Kwasi Kwarteng on how to address the burden on household finances. 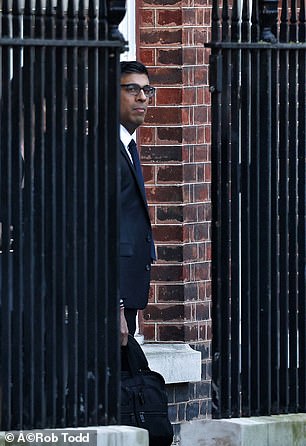 Under government rules, the PM and Chancellor have a tax liability for expenses ‘relating to the use’ of their official apartments, such as heating and lighting

Under government rules, the PM and Chancellor have a tax liability for expenses ‘relating to the use’ of their official apartments, such as heating and lighting.

The value of the benefit is capped at 10 per cent of their ministerial salaries – so not including their MP pay.

Crucially it will not change despite the eye-watering bills for the rest of the country.

The Treasury accounts state: ‘The Chancellor and Prime Minister have the use of their official residences at Downing Street.

‘Expenses relating to its use, such as heating and lighting, are chargeable to tax under the terms of the Income Tax on Earnings and Pensions Act 2003. The benefit in kind is capped at 10 per cent of gross salary.’

The politicians also pay council tax on the properties.

Mr Johnson lives in the four-bedroom apartment above No11 with wife Carrie and their children. There is a £30,000 a year taxpayer allowance for maintenance and improvements, but Mr Johnson has been heavily criticised for initially trying to get donors to pay for a much more expensive refurbishment.

Mr Sunak lives in the flat above No10 with his wife and two daughters. Since Tony Blair premiers have tended to choose the No11 residence because it is larger.

A Government spokeswoman said: ‘As has always been the case, the Prime Minister and Chancellor are provided with residential accommodation in Downing Street.

‘As agreed with HM Revenue and Customs across successive Administrations, Ministers then pay a tax charge for this benefit in kind which is based on their Ministerial salary.

‘It is not possible to disaggregate the energy costs of 10-12 Downing Street, as it is one combined building.’

Asked what action was being taken and whether a VAT cut on bills was being considered, the Prime Minister’s official spokesman said: ‘Discussions are still ongoing.’

No announcement is expected this week but the spokesman said: ‘The Prime Minister continues to speak to the Chancellor, to the Business Secretary and both those two ministers are having further discussions about what the appropriate response is to abating these cost of living challenges that we are seeing.

‘Obviously, we do have things like the energy price cap continuing to protect 15 million households from high global gas prices, alongside further support targeted to the most vulnerable.’

A Resolution Foundation report today predicted that more than a quarter of families will be driven towards fuel poverty when the government’s price cap lifts.

Energy regulator Ofgem is reviewing its existing cap, which will be revised in February after a record-breaking six months of skyrocketing wholesale prices.

The report also revealed that levels of fuel poverty are likely to be highest in the northeast and the West Midlands, at 33 per cent and 32 per cent respectively, alongside pensioner households, those in local authority housing and those in poorly-insulated homes.

The think-tank’s senior economist Jonny Marshall said: ‘Rising gas prices are causing energy bills to soar, and will see the number of families suffering from ‘fuel stress’ to treble to more than six million households this summer.’ SIMON LAMBERT: The UK's strange gas surplus has sent market prices tumbling... but we can't take advantage to lower our energy bills Inflation has hit 9 per cent - a 40-year high – and energy prices are among the chi...