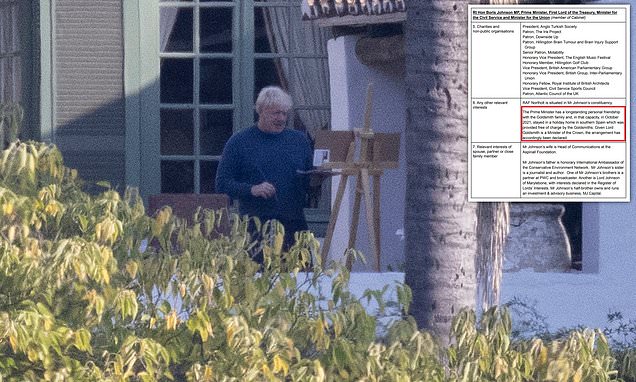 No10 says Boris has been CLEARED by sleaze watchdog over refusal to declare ‘freebie’ family holiday to Spain on Commons register… meaning PM need never reveal how much it was worth (but the VIP airport lounge alone should have been £1,800)

Boris Johnson‘s refusal to declare his freebie family holiday to Spain on the parliamentary register has been approved by the Commons sleaze watchdog, No10 said today.

The PM’s spokesman said standards commissioner Kathryn Stone had ‘agreed with the approach’ that listing it on the ministerial register was enough.

The apparent decision by Ms Stone means that Mr Johnson will never have to disclose how much the week at a luxury villa owned by the family of Lord Goldsmith was worth.

However, the premier has included an estimated value for free use of the VIP departure suite at Heathrow in the the latest edition of the Commons register.

The facilities at the Windsor Suite – including a personal butler – would have been £1,800 for Mr Johnson, wife Carrie and their son Wilfred had they paid personally.

Downing Street has previously claimed that because the Johnsons’ holiday in Spain last month was provided by a minister it falls outside the remit of the House of Commons financial probity watchdog.

The ministerial register of interests stated it was offered free of charge by Lord Goldsmith, a former MP and friend of Mrs Johnson who was handed a peerage by Mr Johnson after losing his Commons seat in 2019.

But an entry on the separate MPs’ register would require revealing how much the benefit in kind was worth.

A spokesman for the PM said today: ‘The parliamentary standards commissioner has agreed with the approach taken by the PM that the substantive family holiday in Spain does not require a separate Commons registration.

‘The PM took advice as well from (ministerial interest adviser) Lord Geidt and he registered it as per the rules.’ 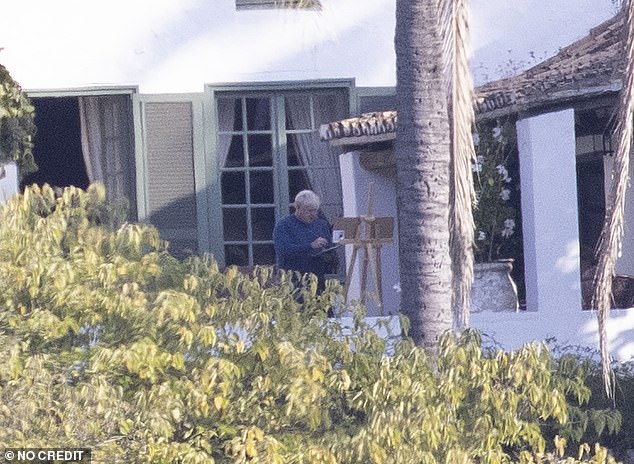 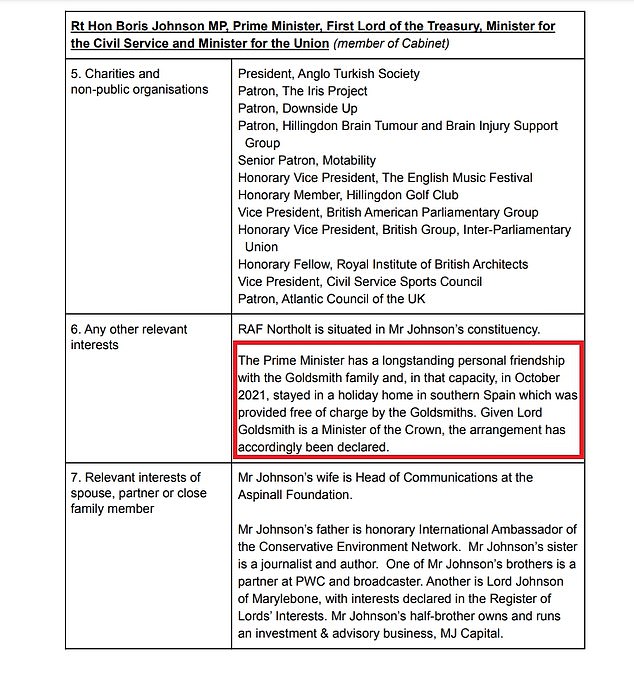 The latest ministerial register, released earlier this month, included a paragraph reading: ‘The Prime Minister has a longstanding personal friendship with the Goldsmith family and, in that capacity, in October 2021, stayed in a holiday home in southern Spain which was provided free of charge by the Goldsmiths.’

However, the premier has included an estimated value for free use of the VIP departure suite at Heathrow in the the latest edition of the Commons register

The Torre Tramores estate, where the Johnson family stayed, is available for private rent at a cost of £25,000 per week for a secluded retreat with its own private helipad.

Questions had been raised over Mr Johnson’s declaration, not least because previous freebie holidays have been declared on the Commons register rather than the ministerial version. The latter is typically used for listing interests such as charity patron roles, and the fact that RAF Northolt is in Mr Johnson’s constituency.

There were also doubts over whether use of the villa could be classed as a gift solely from Lord Goldsmith, as it is owned by the wider Goldsmith faily.

The standards commissioner’s office refused to comment on an individual case.

Labour deputy leader Angela Rayner declined to say whether the watchdog had informed her that her call for an investigation had been rejected.

The Windsor Suite is close to Terminal 5 at the west of London airport.

According to its website, guests can await their flight in one of eight private lounges, adding: ‘Meeting you at our private suite will be one of our doormen who will escort you inside where your personal butler is waiting.’

It also boasts a food menu from Michelin-starred chef Jason Atherton and offers the use of a personal shopper in the main terminal building.

The facility has previously been used by VIPs including the Duke and Duchess of Cambridge and the singer Adele.

He was given hospitality for three people in the lounge on October 7, the register shows.

Labour’s deputy leader Angela Rayner said: ‘It is utterly ludicrous that the only donation that Boris Johnson has declared related to his latest freebie luxury holiday is the hospitality he enjoyed in the lounge waiting for his plane.

According to its website, the Windsor Suite, which is close to Terminal 5 at the west of London airport, guests can await their flight in one of eight private lounges, adding: ‘Meeting you at our private suite will be one of our doormen who will escort you inside where your personal butler is waiting.’

A No 10 spokesman said the holiday provided by ‘a longstanding friend’ had been registered correctly.

However, the ministerial code entry says the property was provided by ‘the Goldsmiths’, not just the minister.

Labour has demanded a probe into the holiday by the Parliamentary Standards Commissioner.

Goldsmith is the former MP for Richmond Park who was elevated to the peerage by Mr Johnson after losing his seat to the Liberal Democrats.

The move allowed the 46-year-old to remain in Government as an environment minister. He is currently Minister for the Pacific and the Environment having been given an additional role in a 2020 reshuffle.

The stay at the Torre Tramores in early October sparked fury as Mr Johnson left the UK amid a gas price crisis that struck businesses. 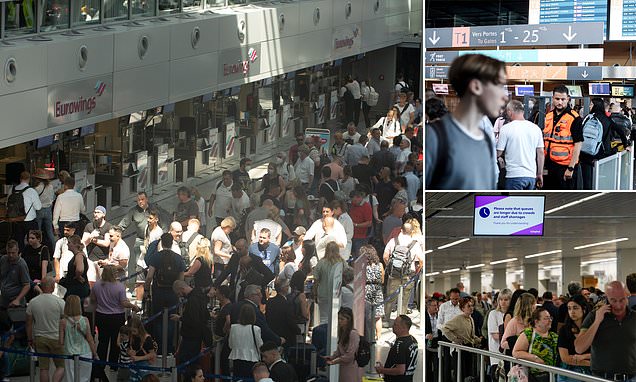 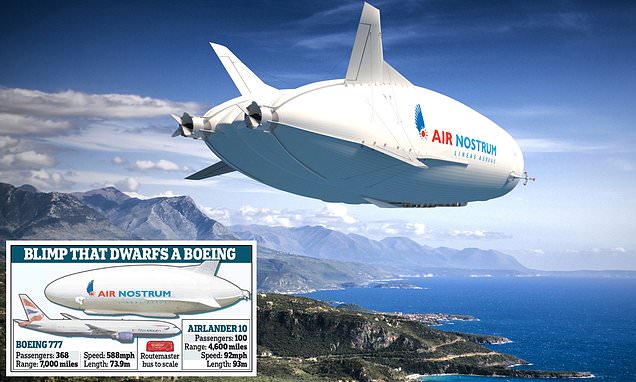 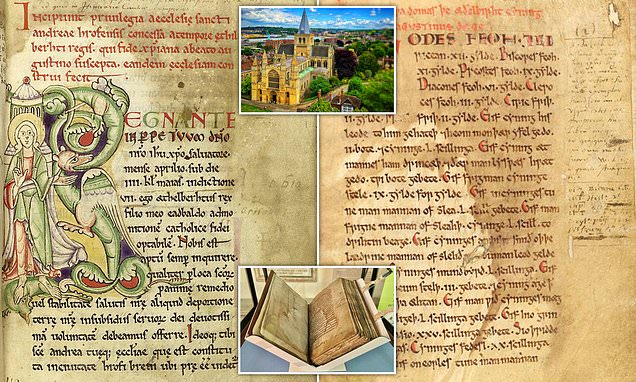 Medieval manuscript at Rochester Cathedral that contains early English laws from 7th century - including having to pay '50 shillings' for 'slaying someone in the king's house' - is added to prestigious global registe... 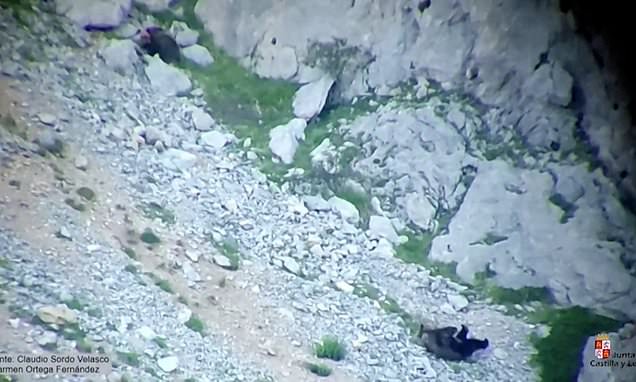 Jaw-dropping moment mother bear defends her cub in death fight with 500lb male before they both tumble off steep rocky cliff with her rival dying before she vanishesWARNING: DISTRESSING CONTENT The female bear was pr...