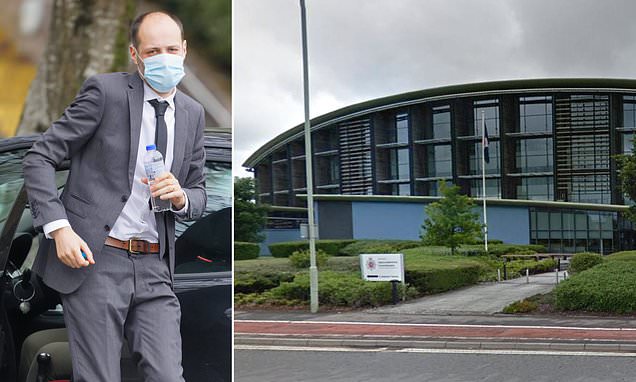 경찰관, 33, who was cleared by a jury over claim he tried to film naked female colleague as she showered is found guilty of gross misconduct

A policeman who was cleared by a jury of trying to film a naked woman colleague as she showered at Gloucestershire Police headquarters has been found guilty by a disciplinary panel of gross misconduct.

The panel ruled yesterday that if PC Jonathan Eaton, 33, had not already resigned from the Constabulary just before the hearing began he would have been dismissed.

Eaton, from Brockworth in Gloucester, quit his job three days before the disciplinary hearing, having been suspended from duties since his arrest on February 27, 2019.

He told the panel he would not be attending the misconduct hearing at Gloucestershire Police HQ in Waterwells, nr Gloucester, or taking any active part proceedings.

Eaton had been acquitted of an alleged offence of voyeurism by a jury at Newport Crown Court in April last year.

The charge alleged that he attempted to observe and record for sexual gratification a person involved in a private act without consent on February 27, 2019.

The jury cleared him after a retirement of more than five hours at the end of a six-day trial.

Presiding Counsel Gerard Boyle QC told this week’s misconduct hearing on Monday that, as a result of legislation in 2017, former officers could still face misconduct proceedings after leaving the police.

‘However the outcomes are now limited because he is a former officer and those outcomes are determined by whether there is a finding of misconduct or gross misconduct,’ 그는 말했다. 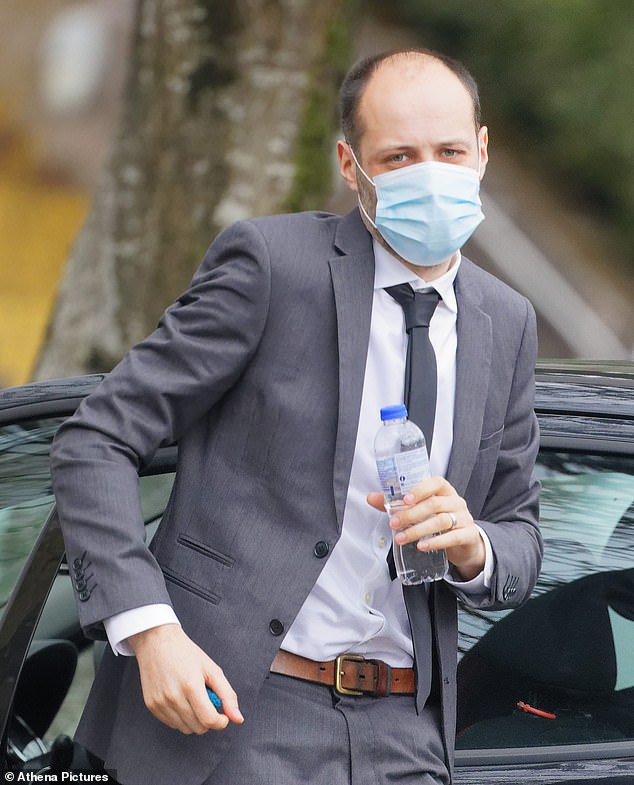 PC Jonathan Eaton pictured arriving at Newport Crown Court on April 12 작년, where he was cleared by a jury of voyeurism

Mr Boyle said that the initial incident occurred at the unisex changing rooms of Gloucestershire Constabulary’s headquarters on February 27, 2019 when a woman employee, referred to as Witness A, was using the shower as part of her daily routine at around 7.15am.

The woman employee told the hearing that as she was drying herself off some 10 몇 분 후, she noticed a phone poking out from the gap at the bottom of the partition to the next door cubicle.

‘I saw the front of the phone it was protruding into my cubicle. It was not on the ground, it was being hand held towards the top of the gap. I couldn’t see a hand because the phone was angled,’ 그녀가 말했다. ‘I noticed it had blue edging on it.

‘I grabbed a towel and wrapped it around me. I then heard movement of somebody scurrying away from the adjacent cubicle.

‘I had to react quickly because If I didn’t it would be too late. I shouted “stop that man”. I flew out of the cubicle and went straight up to the man, who I now know as Eaton, and challenged him about putting the phone under the partition.

‘He said he hadn’t and stated he had just come from the toilet. I asked him where was his phone? When he showed me I immediately recognised the blue edging and realised it was the same phone I had seen earlier.

‘He did not unlock it, or attempt to show me what was on it. Had he done so I would have kept the phone.’

PC Sarah Shaw, one of the women who was in the changing rooms at the same time, told the hearing that she knew Eaton, having been on a course with him prior to this incident.

그녀가 말했다: ‘When I heard somebody shout “stop that policeman” above the noise of a hairdryer I could see that the woman was visibly upset. I took hold of his arm as he stated he had just come from the toilet. He was angry and defensive and he tried to pull away.’

Mr Boyle told the hearing that Eaton claimed he had knelt down to use the high pressured shower to sculpt his hair.

He added that Eaton then accessed the internet and paid for more cloud storage space for his phone before telling his supervisor he was unwell.

Eaton went home just after 8am, where he contacted the Police Federation at 8.45am – ‘a clear indicator that he already knew there was going to be an investigation,’ Mr Boyle said.

‘At 9.25am Eaton accessed a website detailing how to back up his phone. Between 9.26am and 9.36am his phone was backed up to the cloud and he then performed a factory reset on the phone.’

Mr Boyle said Eaton wanted to ‘deliberately destroy any evidence of his phone use’ and added that ‘he did so knowing the importance of securing evidence’. 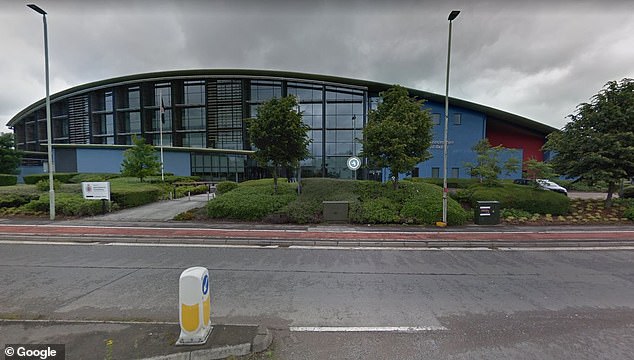 The headquarters of Gloucestershire Constabulary, where the alleged incident is said to have taken place

Eaton, who joined the Gloucester Constabulary as a special constable in 2009 before becoming a regular officer four years later, was arrested by officers later that morning and questioned.

The panel was told that the primary purpose of disciplinary procedures was not to punish officers but to preserve public confidence in the reputation of the police service by holding officers accountable and making clear that improper behaviour would not go unchecked.

Hearing chairman Peter Cadman said the panel found that Eaton’s actions amounted to gross misconduct in that he had:

The panel, which included Tim Smith, an independent observer, and Police Superintendent Steve Bean, found that had Eaton still been a serving officer he would have been dismissed.

Commenting after the two day hearing, Assistant Chief Constable Rhiannon Kirk said: ‘Former officer Eaton’s behaviour was abhorrent and utterly at odds with everything we stand for. It was compounded by the fact that, despite many chances to be honest afterwards, he took measures to evade the truth.

‘My admiration and thoughts are with our female colleague involved in the case, who has shown great courage and strength throughout this process – and we thank her for her commitment to seeing the case through.’

The full finding will be published by the Constabulary’s Professional Standards Department shortly.