Police or private guards will protect MPs at weekly surgeries 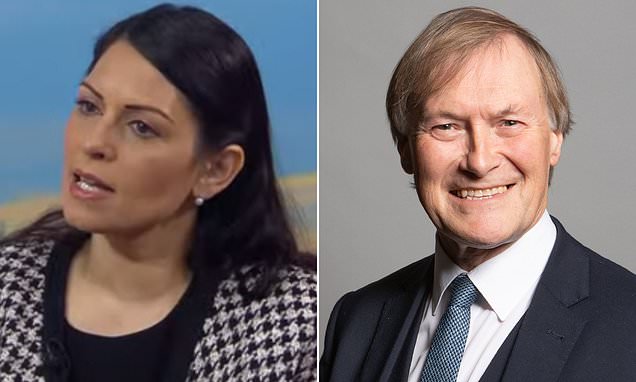 ‘We cannot break the link between politicians and the people’: Priti Patel says MPs must keep meeting voters after David Amess murder as she hints police will guard weekly surgeries and refuses to rule out ending anonymity on social media to curb threats

Priti Patel today insisted MPs must keep meeting voters as she hinted that police will guard weekly surgeries – and refused to rule out ending anonymity on social media to curb threats.

The Home Secretary said it would be unacceptable for the murder of Tory veteran David Amess to ‘break the link between an elected representative and their democratic role, responsibility and duty to the people who elected them’.

She confirmed that security has already been ramped up since the deadly attack with politicians reminded to share their locations with police.

The government is looking at ensuring every MP gets officers on guard at their surgeries – a move backed by Speaker Lindsay Hoyle.

Ms Patel also said the government is ‘looking at’ whether there needs to be more action to stop threats and abuse being posted anonymously online.

However, Conservative MP Andrew Rosindell, a close friend of Sir David, lashed out at the police for ignoring threats.

‘I’ve had four or five incidents where I’ve had to report things to the police,’ he told Times Radio. ‘And quite often they literally don’t do anything or the onus is on me to give endless statements which lead nowhere.’

Southend West MP David Amess was meeting constituents at a church in Leigh-on-Sea, Essex, when he was stabbed to death on Friday afternoon. 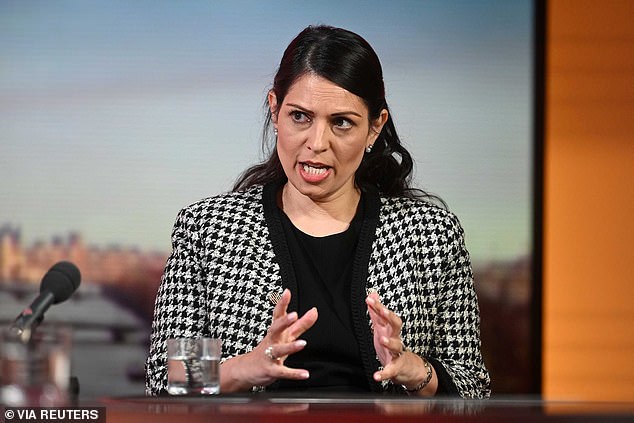 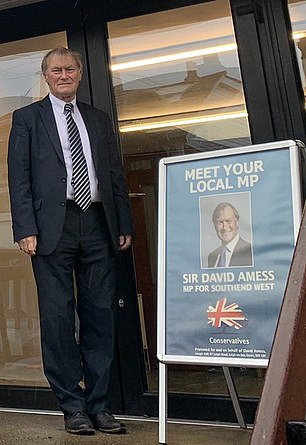 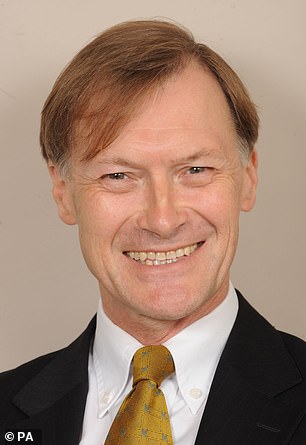 Sir David Amess, 69 (pictured, left, outside his surgery earlier this month), was stabbed ‘multiple times’ by a man as he spoke to constituents at Belfairs Methodist Church on Friday

MPs will be offered police protection or private security at constituency meetings under plans being reviewed by Priti Patel in the wake of the murder of Sir David Amess. Pictured: Boris Johnson, Sir Keir Starmer, Lindsay Hoyle and Priti Patel pay respects in Leigh-on-Sea, Essex

Labour MP admits she does not feel safe in own constituency

A Labour frontbencher has admitted she does not feel safe in her own constituency, as MPs spoke of their own experiences after the murder of David Amess.

Shadow foreign secretary Lis Nandy told the BBC’s Andrew Marr Show that Sir David’s death was ‘heart breaking’, adding: ‘It does make you very anxious but none of us are going to stop doing our job as a consequence.’

Asked whether she felt safe doing her job in her constituency, the Wigan MP replied: ‘No, not really if I’m honest. I feel quite fortunate to have a lot constituents who are concerned about my safety.

‘Wigan is that kind of place, people look after each other and when they see things like this, my inbox this morning is absolutely full of people saying: ‘keep going and thank you’, and I’m sure lots of MPs are getting the same thing.

‘But this isn’t the first time this has happened.’

Ms Nandy said the response to MP security concerns had been ‘far too patchy’, adding: ‘We can’t afford to get into a place where we are all trying to out do each other about the risks we are prepared to do this job – an attack on MPs is an attack on democracy because it silences the people who we represent, so we have to take this more seriously.’

Police continue to question a 25-year-old British man of Somalian descent last night and have been granted permission to detain him until Friday.

Speaking to Sky News’ Trevor Phillips On Sunday programme this morning, Ms Patel said many MPs would be ‘reflecting’ upon their own constituency interactions and safety this weekend.

But she insisted it was crucial that MPs continue to do their democratic duty by meeting voters.

‘I’ve been a member of parliament for just over 10 years and we are part of the fabric, the DNA of society, our democracy, freedom, the chance for people to engage with us,’ she said.

‘But what I would say is that a lot has changed.’

Ms Patel said the murder of Jo Cox was an ‘intensive period’ for MPs when it came to thinking about their own safety, adding: ‘We have all changed our ways of working because of changing concerns, threats in society.’

But she added: ‘This should never ever break that link between an elected representative and their democratic role, responsibility and duty to the people who elected them.’

Ms Patel said the Speaker ‘has already put in a range of measures post-Friday, as we have with policing, but within that there are other options that are being considered, such as when you hold your surgeries could you have officers or some kind of protection while you’re holding you surgery’.

‘Now it’s not for me to determine the mechanism for that right now but there are discussions under way right now looking at a whole spectrum. That’s only one example, and there are others as well that are actively under consideration right now,’ she said,

She said it is ‘not necessarily about new resources’ but said ‘we will do absolutely everything.. to safeguard our democracy and enable our elected representatives to carry on doing what they do, serving the public.’

Pushed on whether she will consider removing the right to anonymity on social media, Ms Patel said: ‘I want us to look at everything.

‘I’ve done a lot of work on social media platforms, mainly around encryption and areas of that nature.

‘But we can’t carry on like this. I spend too much time with communities who have been under attack, basically who have had all sorts of postings online and it is a struggle to get those posts taken down.

‘We want to make some big changes on that.’

Parliament bosses have not renewed their contract with Chubb who were brought in after the murder of Jo Cox five years ago to install additional security for MPs when they are not in their offices.

According to the Telegraph, MPs complained of slow service and poor security advice and the company will be replaced by ADT later this year, he firm used by the Home Office to install alarms for high-risk Cabinet ministers.

One MP told the Telegraph: ‘They have yet to do a single thing in my new house, despite getting on to them the day after I moved in.

‘It also took a year to do the most basic stuff at my office, like fitting a new front door.’

The newspaper reports that some MPs have been offered fixed panic alarms in their constituency offices and homes, while others have been given portable ‘lone worker devices’ that can alert police if they are in danger. 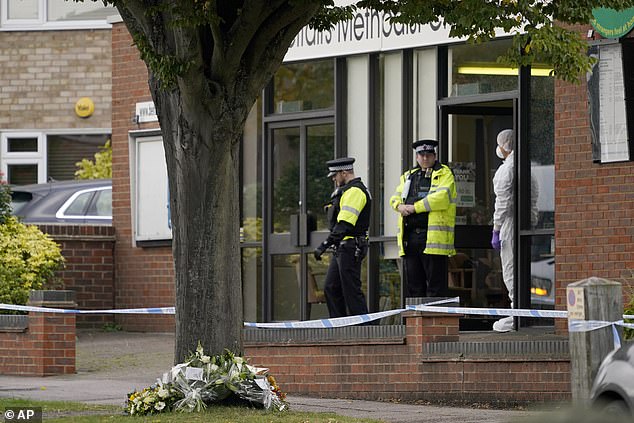 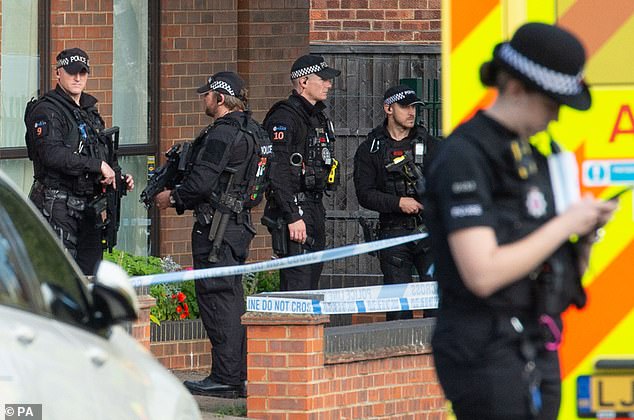 MPs say they were left in the dark over a security overhaul in the lead up to the murder of Sir David Amess.

Security firm ADT is set to take over the responsibility for security at MPs homes and offices later this year.

But some MPs have been left angry and complained that alterations have already started with little communication about the changes.

The Mirror reports that some devices in MPs homes were being altered on the day of Sir David’s murder.

Leicester West Tory Andrew Bridgen told the newspaper: ‘The first I knew about this was when Chubb phoned me to make an appointment.

‘He [the technician] came round to change my codes exactly an hour before David was murdered.’

Another MP said they have not been instructed on how the new devices work.

They claim the only way to find out is to press their panic buttons to see what happens.

Yesterday, defiant MPs continued to hold constituency surgeries as normal yesterday, while debate raged over whether Parliamentarians should be given police guards.

Alec Shelbrooke, Tory MP for Elmet and Rothwell, who held a surgery at a local supermarket yesterday, said: ‘We cannot let events like this diminish the deep relationship between an MP and their constituents.

‘This is a relationship I value deeply: I want my constituents, regardless of whether they voted for me or not, to be able to approach me in the street, in the pub, at the supermarket or at one of my surgeries.’

Tory former Cabinet Minister David Davis said suspending public meetings would be ‘a terrible reflection of what David stood for’.

Robert Largan, Tory MP for High Peak, tweeted: ‘I’ll keep on doing my weekly surgery, all year round, whatever the weather! We all need to stand up for our democracy!’

Dr Kieran Mullan, the Tory MP for Crewe and Nantwich, tweeted: ‘Surgery today, we must not let people force us to do things differently. David would not have wanted that.’

Some MPs sounded a more cautious note, with the Tory former Defence Minister Tobias Ellwood calling for a pause of face- to-face meetings until a safety review had been completed. Labour MP Harriet Harman called for an official review of MPs’ safety.

After the attack on Friday, police were said to be contacting all MPs to check on their security.

Writing in The Observer and the Mail on Sunday, Commons Speaker Sir Lindsay Hoyle said he was ‘working closely and at pace with the Home Office and the police’ to identify ways to improve MPs’ safety.

The attack came five-and-a-half years after Labour MP Jo Cox was killed by a far-right extremist in her Batley and Spen constituency in West Yorkshire.

It is understood Labour will not be standing a candidate in the Southend West by-election.

The party is set to follow the principle established after Mrs Cox’s murder, when the major parties declined to select candidates for the by-election.

The Liberal Democrats have also confirmed they will not fight for the Southend West seat when a polling date is set. 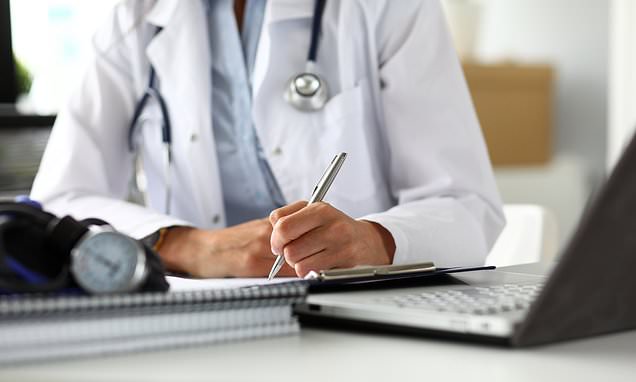 GP surgeries are still offering too many remote consultations and need to strike a better balance for patients, NHS boss says'We're trying to find our way back to the right balance,' said NHS Digital chief Around 80 ... 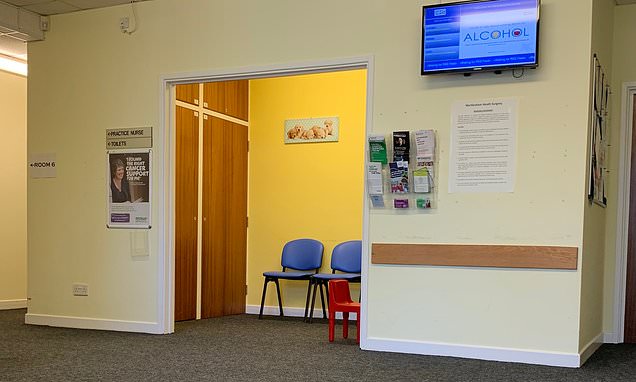 Rise of mega-practice: half of small surgeries have shut in a decade

Rise of the mega-practices: Half of our smaller GP surgeries have shut in less than a decade with patients having to use 'soulless' alternatives, data showsMore and more NHS patients forced to travel to mega-practice... 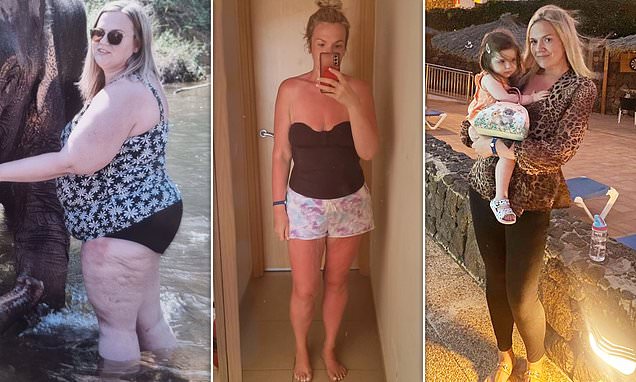 Mother, 32, who was eating four takeaways a WEEK sheds 10st and saves £6,000 after swapping junk food for home-cooked mealsHayley Pattison, 32, from Bedfordshire, sent £60 per week on takeaway meals After giving birt... 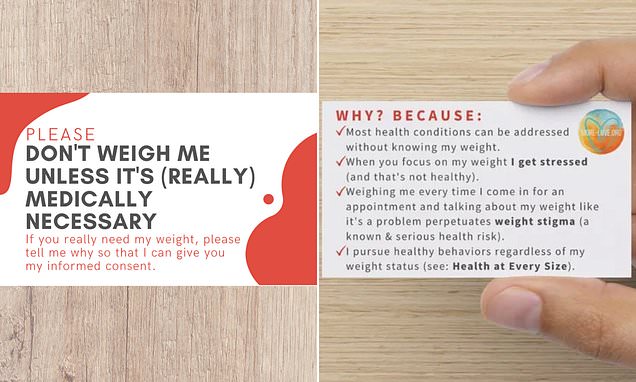 ‘Don’t weigh me’ cards available in US surgeries

US body positivity campaign group creates cards for patients asking doctors NOT to weigh them unless it's 'really medically necessary' because it 'stresses them out' and perpetuates 'weight stigma''Don't Weigh Me Car...