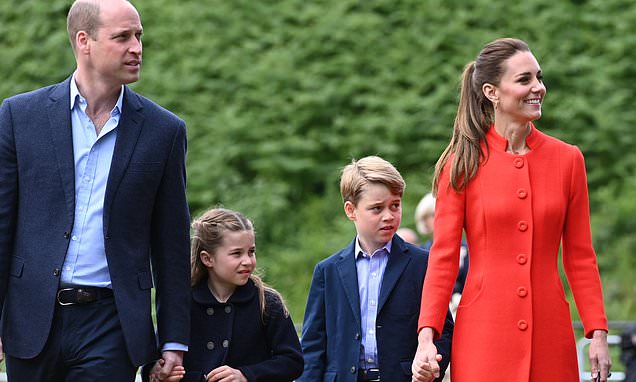 Prince William and Kate Middleton will move their family into a four-bedroomed home on the Windsor estate this summer.

The Duke and Duchess of Cambridge, are reportedly set to uproot their family from Kensington, west London, to Adelaide Cottage in Berkshire in order to be closer to the Queen.

Re-erected in 1831, the Cambridge’s new Grade II-listed retreat is just a short walk from St George’s Chapel and Windsor Castle, and sits proudly on the 655acre royal estate in Berkshire.

Sources close to the family suggest the Cambridges were keen to be closer to the Queen, 96, who has suffered episodic mobility issues in recent months and also secure a good school for their three children.

George, eight, Charlotte, seven and Louis, four, will be pulled out of their current prep school in Battersea and are all expected to start school locally when the new academic term begins in September.

The move also represents a new start for the senior royals as they continue to cement their place among the most influential members of The Firm.

One source told the Sun: ‘Kate and William were very keen for a modest home to start their new lives in Windsor. Adelaide Cottage fits the bill because it is a four-bedroom home and they do not need any more as they have no live-in staff.

‘They had no other demands than a pleasant family home close to schools and the Queen.

‘They were adamant they didn’t want anything too showy or anything that needed renovating or extra security so as not to be a burden on the taxpayer.’ 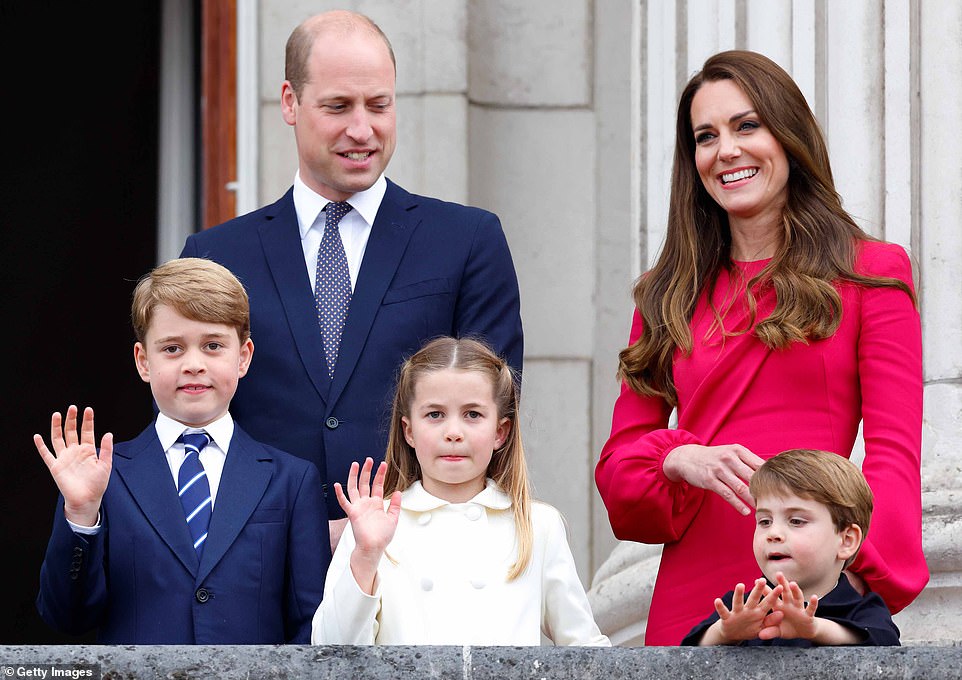 The Duke and Duchess of Cambridge, are reportedly set to uproot their family from Kensington, west London, to a four-bed property in Windsor ‘to be closer to the Queen’ 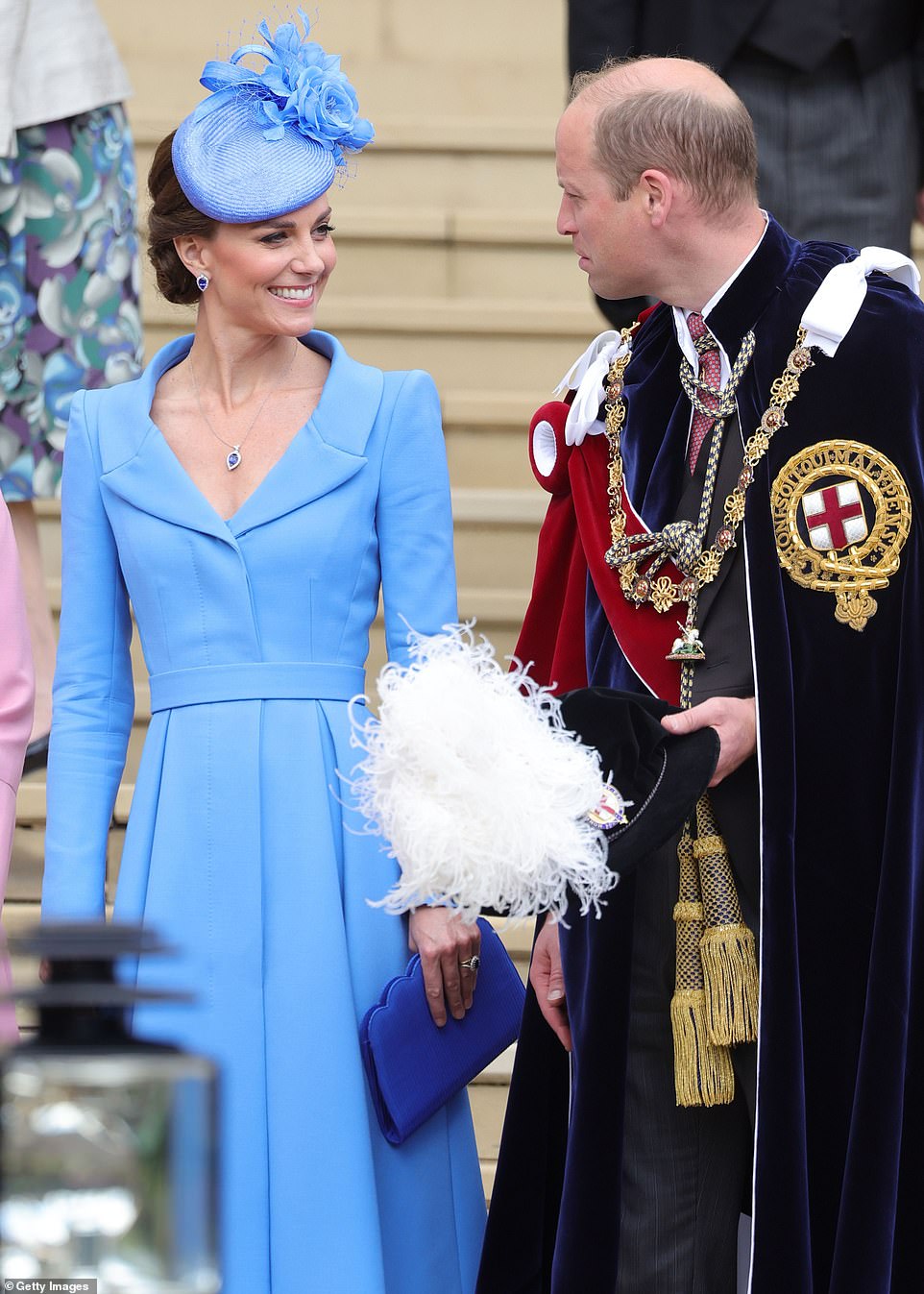 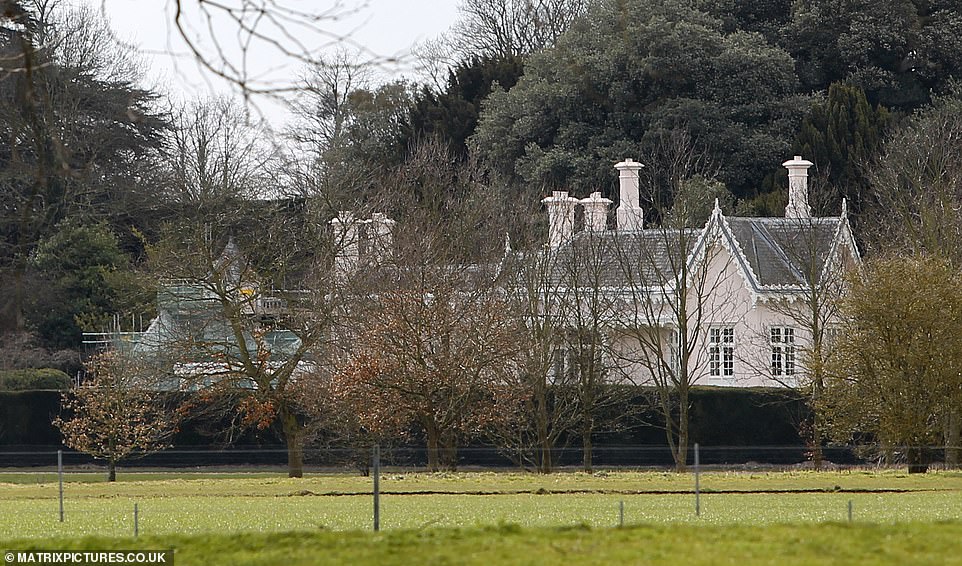 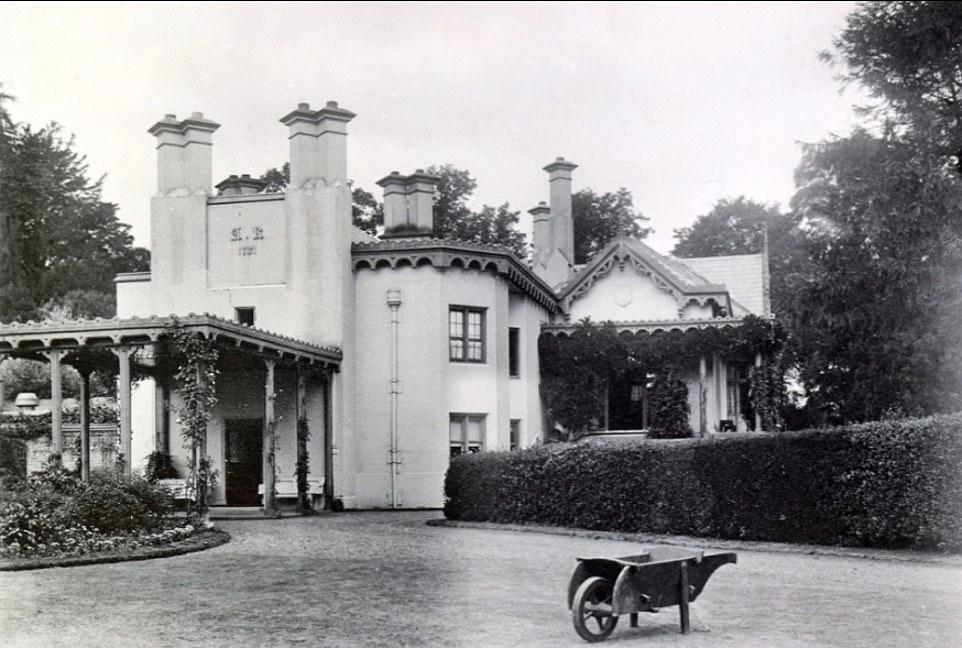 Re-erected in 1831, the Cambridge’s new Grade II-listed retreat is just a short walk from St George’s Chapel and Windsor Castle, and sits proudly on the 655acre royal estate in Berkshire 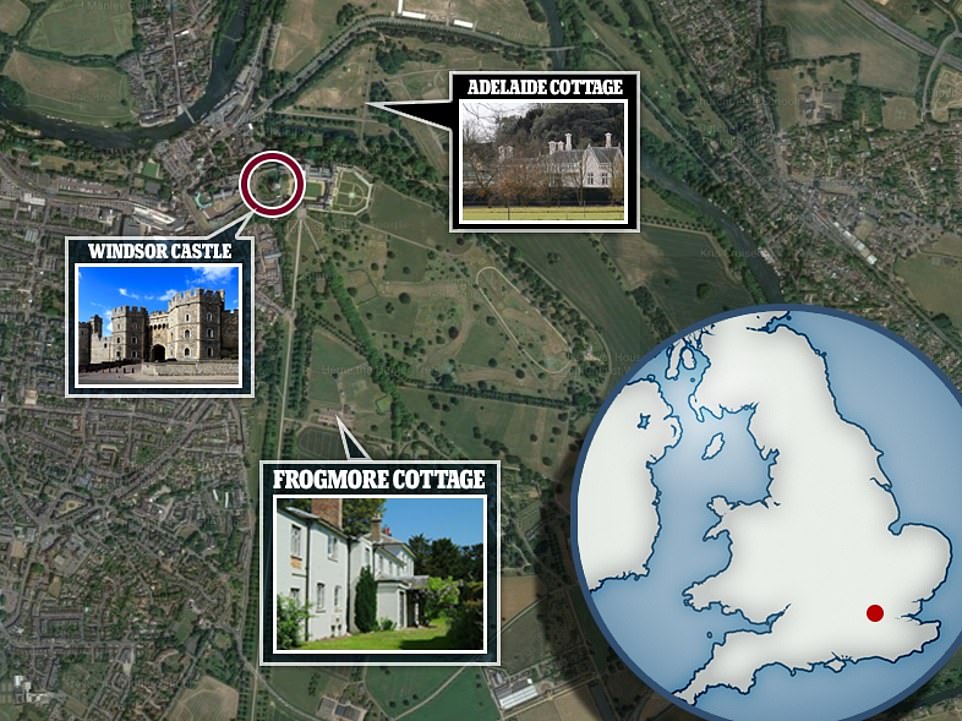 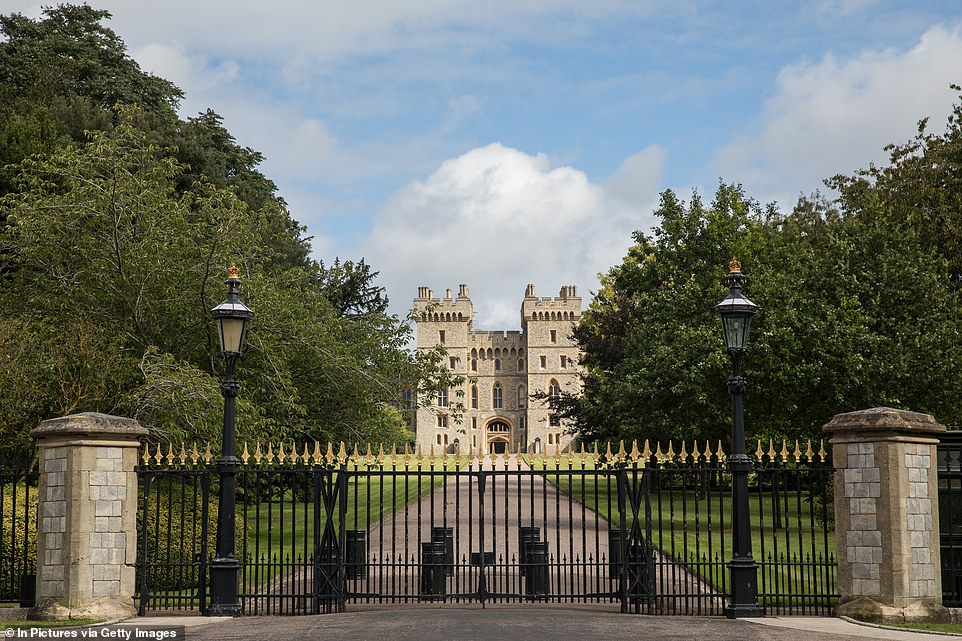 Adelaide Cottage is only a few minutes’ walk from Windsor Castle, pictured. William and Kate are believed to want to bring their children up in the country 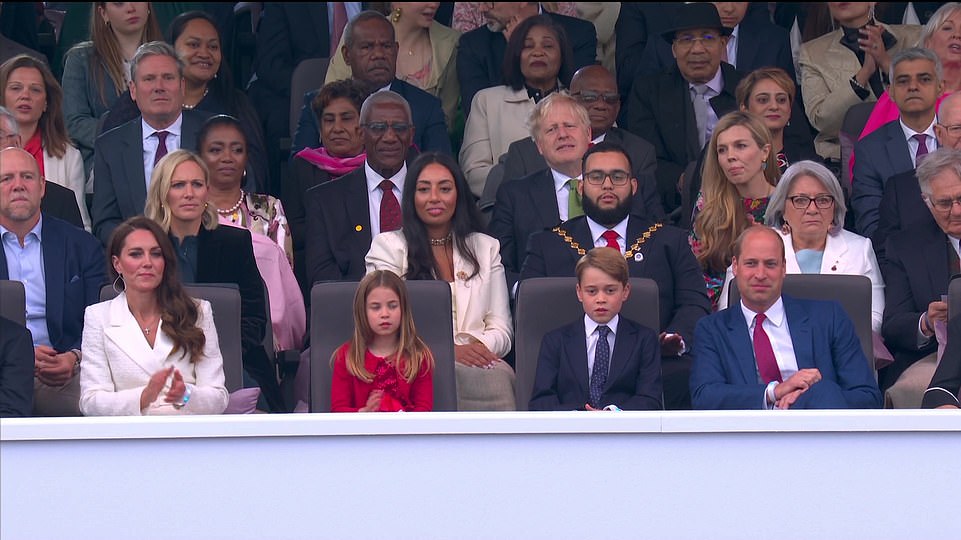 The move also represents a new start for the senior royals as they continue to cement their place among the most influential members of The Firm. Pictured: Prince William, 39, and Kate Middleton, 40, brought along their two eldest children as the Royal Family turned out in force for the historic concert in London on Saturday, June 4 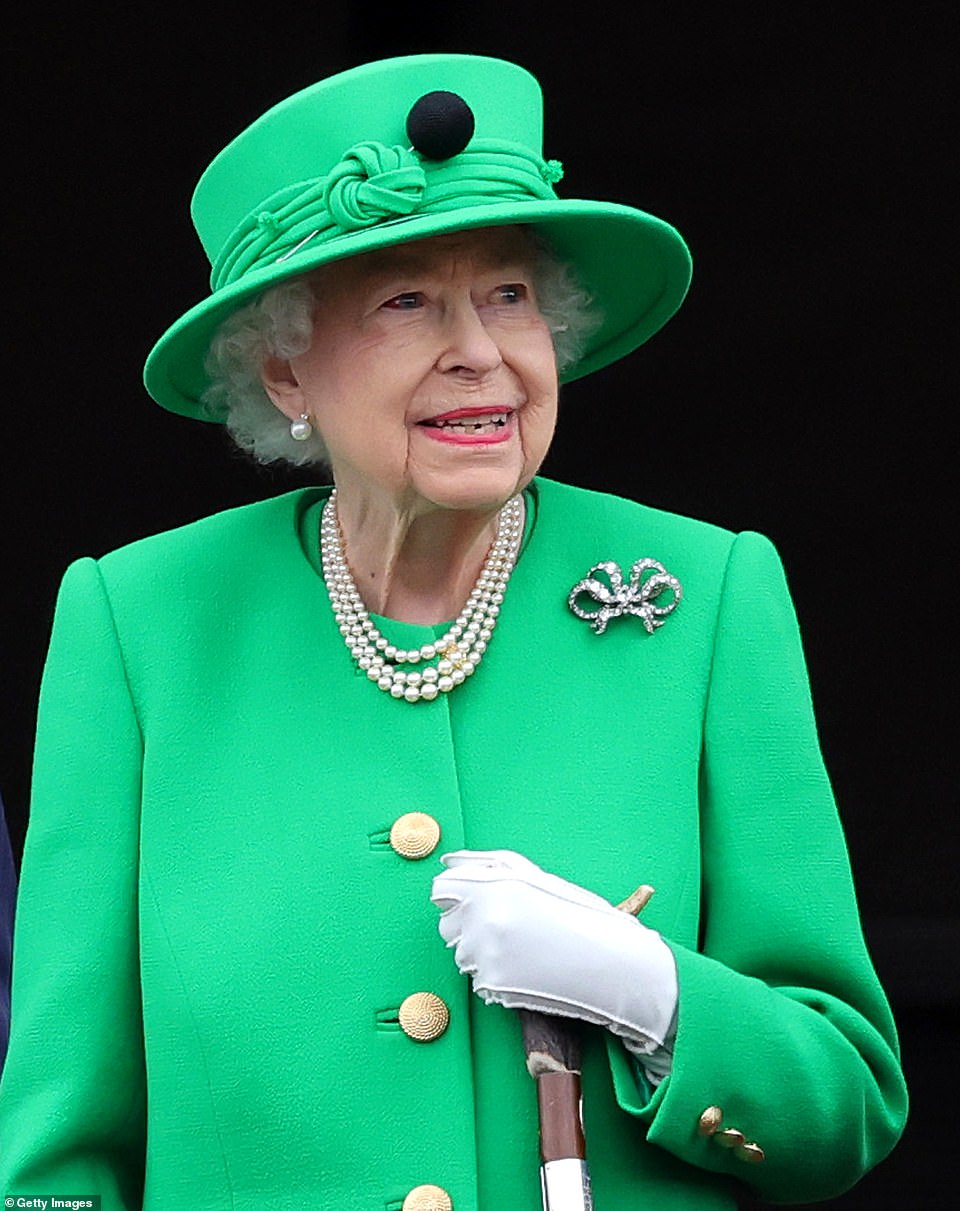 Sources close to the family suggest the Cambridges were keen to move closer to the Queen, 96, who has suffered episodic mobility issues in recent months. Her Majesty is pictured from the balcony of Buckingham Palace on Sunday, June 5

It is understood that the couple’s move could be completed as early as this summer.

One clear advantage of their new retreat is that is requires no costly refurbishments or added security arrangements, compared to his brother Prince Harry and Meghan Markle splashing £2.6m to fix-up nearby Frogmore Cottage.

The move comes after months of speculation that the senior royals were preparing to move from Kensington Palace, which has been their main residence since 2017.

The couple moved there from their country home, Anmer Hall, in Norfolk, where they had previously spent much of their time. They will also retain their Norfolk retreat, which the Sunday Times reports they will ‘continue to use regularly’.

As first revealed by the Mail, the couple have been planning a move to Berkshire since last year and have enrolled Prince George in a new school there, where he is expected to be joined this September by his siblings Charlotte and Louis.

William, 39, and Kate, 40, are keen for the youngsters to have a country upbringing and want to be closer to the duchess’s parents, Michael and Carole Middleton, who play a hands-on role in their upbringing.

The couple have looked at several properties on the Windsor estate including Frogmore House, which is now used for royal functions but would need a great deal of work and money to turn into a family home, and Fort Belvedere.

But Adelaide Cottage, which has been used as a grace-and-favour home for royal staff and family friends in recent years, now appears to the choice after the Cambridge’s shortlist was whittled down to one.

Nestled at the heart of the Crown Estate’s private 655-acre royal park, Adelaide Cottage was built in 1831 as a retreat for William IV’s wife Queen Adelaide of Saxe-Meiningen.

It was also known to be a favourite home of Queen Victoria, as she frequently enjoyed taking her breakfast there.

However, the most famous former resident has to be the late Princess Margaret’s ex-beau, Group Captain Peter Townsend, whose affair with the Queen’s sister caused a national scandal.

The cottage underwent major renovations in 2015, which means the Cambridges would not have to shell out millions in remodelling the house.

It also has seven gated entrances and exits to Windsor Castle so the family can come and go in relative privacy. 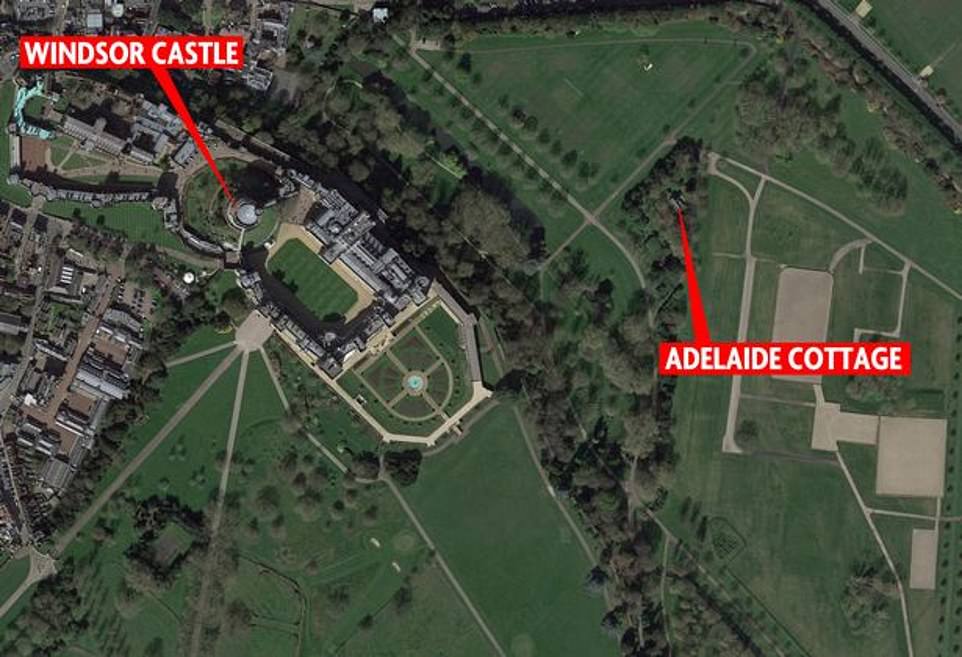 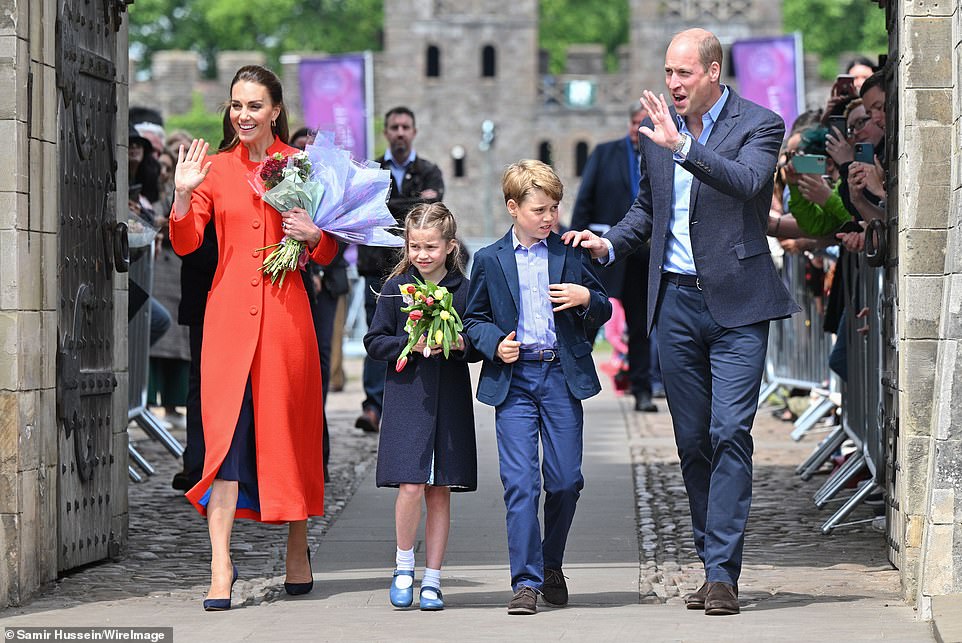 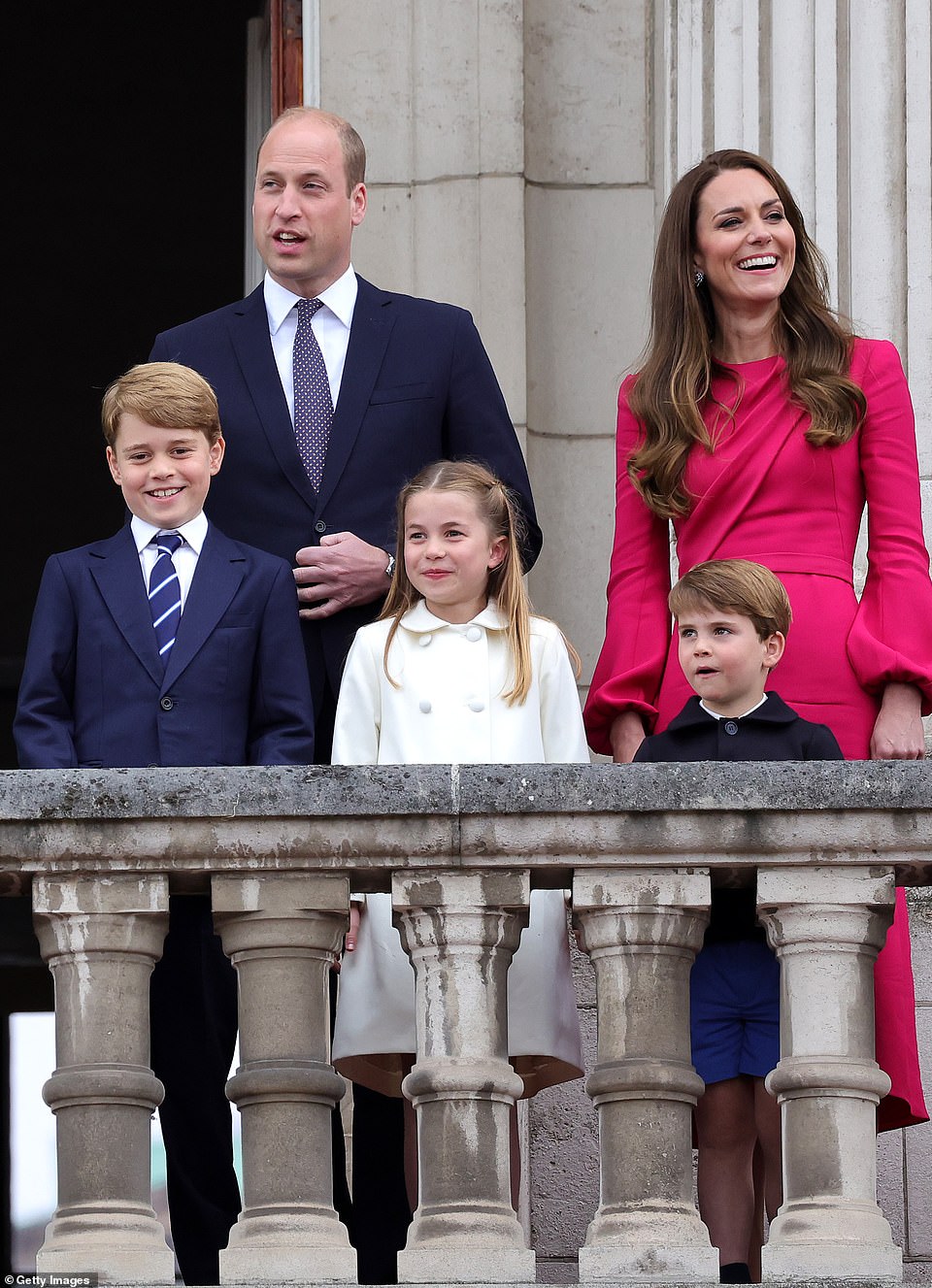 Sources close to the family suggest the Cambridges were keen to be closer to the Queen, 96, who has suffered episodic mobility issues in recent months and also secure a good school for their three children 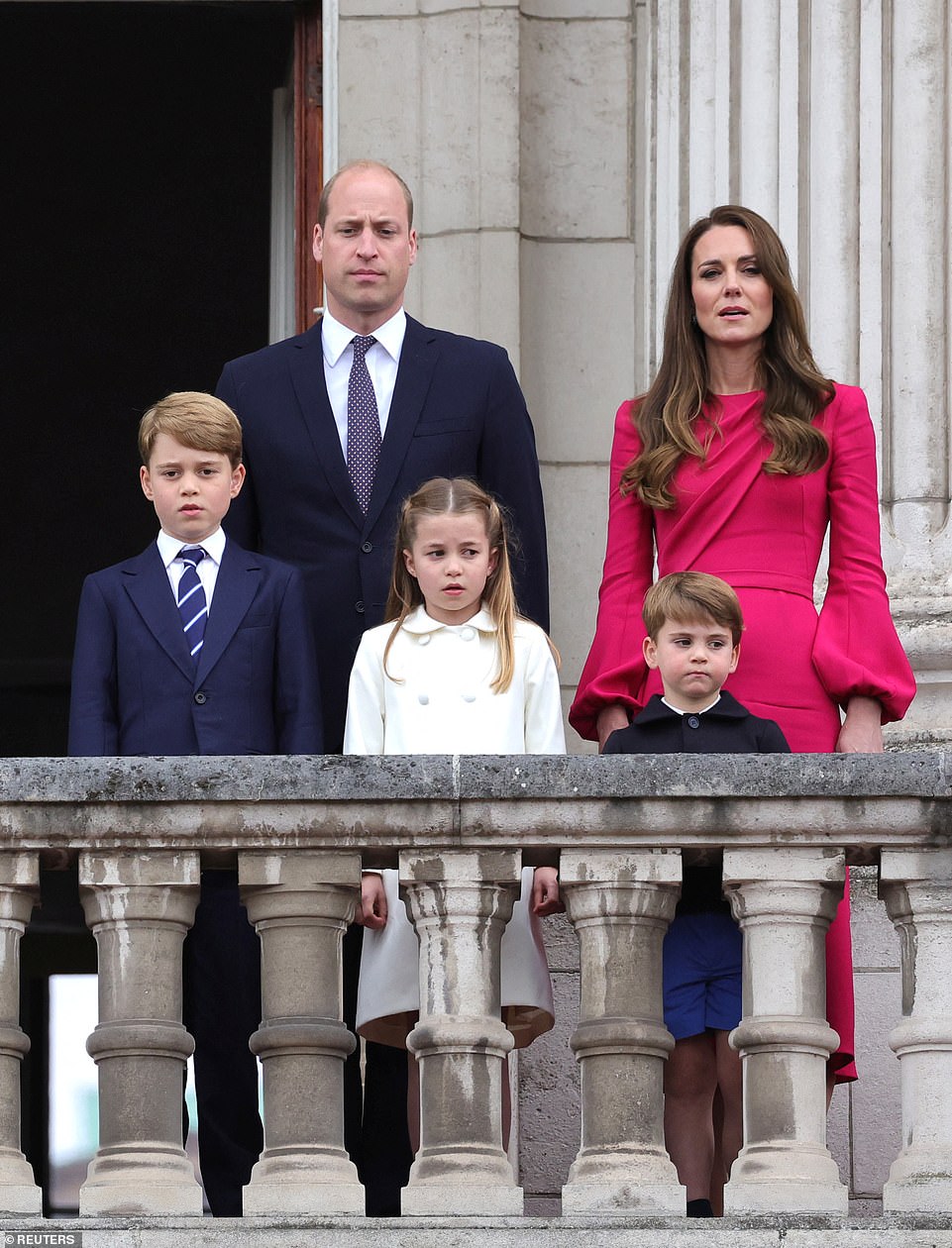 The present and future generation of the Royal family were on display during the Queen’s Platinum Jubilee celebrations, with William and Kate standing behind Prince George, Princess Charlotte and Prince Louis

By Beth Hale for the Daily Mail

As royal residences go, Adelaide Cottage has neither the proportions nor grandeur of its larger, more illustrious neighbour.

But what it lacks in stature, this picture-postcard cottage standing in the shadows of Windsor Castle more than makes up for in its intriguing role in one of the best-known love affairs of the 20th century.

For back in the years following the Second World War, Adelaide Cottage was the grace-and-favour home of Group Captain Peter Townsend.

He, of course, was the dashing RAF pilot and later equerry to King George VI who would precipitate a scandal, becoming the divorced lover of Princess Margaret.

Back when it was built in 1831 by King William IV for his wife Queen Adelaide, the cottage was a day retreat for the royal couple.

Although it seemingly fell out of favour with the queen after the death of her husband in 1837, it remained a popular destination for breakfast or tea with his successor, the young Queen Victoria.

So popular, in fact, that a new private carriageway was created for her. Not only that, her beloved King Charles spaniel, Dash, was buried in the grounds.

But the most intriguing interlude in the cottage’s history came with the appointment of Peter Townsend to the King’s staff.

The Battle of Britain pilot was married to Rosemary and had a toddler son, Giles, and another, Hugo, on the way, when he was made the King’s equerry in February 1944 and granted the use of a grace-and-favour property, tucked behind a ten-foot privet hedge, within walking distance of the ‘office’.

Adelaide Cottage became the first proper marital home for Townsend and his wife after three years of wartime marriage – though back then it was far from a glamorous proposition.

Power was delivered along cables running from Windsor Castle, but the current was so poor it could only support a vacuum cleaner and a small electric heater at any one time.

For the most part, Adelaide Cottage had sunk back into its backdrop under the shadow of Windsor Castle’s grey stone.

However, the four-bedroom home does have a colourful past to draw from.

Back in the years following the Second World War, Adelaide Cottage was the grace-and-favour home of Group Captain Peter Townsend.

He, of course, was the dashing RAF pilot and later equerry to King George VI who would precipitate a scandal, becoming the divorced lover of Princess Margaret.

Townsend and his family quit Adelaide Cottage in 1952, when he divorced Rosemary. The affair, however, would be doomed by the Royal Marriages Act which stated no member of the Royal Family was permitted to marry a divorcee while the ex-partner was still living.

Since then the cottage has been home to a host of well-connected dignitaries and courtiers, including most recently Simon Rhodes, son of the Queen’s cousin and best friend Margaret Rhodes, who died in 2016.

The move to Windsor means the Cambridges will also be nearer to the home of the Duchess’s parents, the Middletons, who live 45-minutes away by car in the village of Bucklebury.

It has long been reported that the couple could one day move into Windsor Castle. The Queen has spent much of her time at the Berkshire castle following the death of her beloved Prince Phillip.

However it is understood Prince Charles does not plan to spend as much time there when he becomes king.

It has previously been reported that the Prince of Wales plans to spend much of his time at Buckingham Palace during his reign.

The developments come as it was claimed Prince William told the Queen and Prince Charles that he would pull out of Monday’s Order of the Garter ceremony if his uncle Prince Andrew was given a public role.

The Duke of Cambridge’s alleged ultimatum to his grandmother and father reportedly led to the Duke of York being banned from the Windsor Castle event amid fears the crowds might boo him.

Prince Andrew looked downcast as he drove to Windsor Castle as it was claimed his absence from the procession and service was a ‘family decision’, Buckingham Palace said, amid huge controversy over his links to Jeffrey Epstein and alleged abuse of one of his ‘sex slaves’.

Andrew was not be seen in public during Garter Day, one of the most colourful events in the royal calendar, after the Prince of Wales and Duke of Cambridge reportedly lobbied the Queen about his participation. The decision was clearly taken at the 11th hour, because Andrew’s name was on the order of service.

A source told the Evening Standard: ‘The Duke of Cambridge was adamant. If York insisted on taking part publicly, he would withdraw’. It would have also meant that his wife Kate would also not have attended. 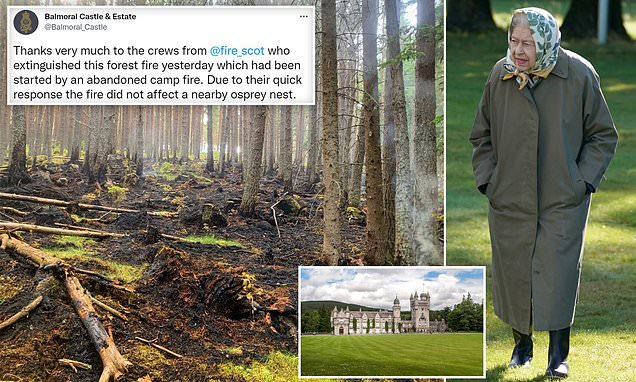