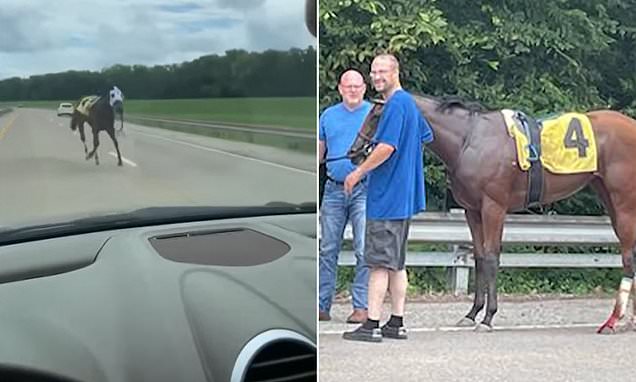 Serious horsepower! Racehorse is filmed galloping down Kentucky highway after escaping from track at start of its first ever race

A two year-old filly was so spooked ahead of her first race that she galloped away from the track and ran down a freeway from Kentucky into Indiana.

The horse, named Bold and Bossy, was just a few minutes from starting her debut competition at Ellis Park in Henderson, Kentucky that afternoon, when another horse in front of her started ‘bucking and playing,’ trainer Michael Ann Ewing told NBC News.

The ruckus apparently scared the filly, causing her to fall, get back up and take off without rider Miguel Mena holding on to her.

She jumped the fence, ran over the levy that surrounds the racetrack and made her way onto Highway 41, according to Barbara Borden, a steward presiding at Ellis Park.

Mena was not injured in the horse’s escapade, officials told the Racing Post, and was able to compete with other horses later that afternoon as Bold and Bossy ran for miles.

Passersby recorded her heading north in the southbound lanes of Highway 41, passing cars while still wearing her blinders and Number 4 racing saddle.

One woman filming Bold and Bossy’s escape could be heard sharing her fears the animal would be knocked down, although several cars slowed down to create a protective ‘ring’ around the animal during her unexpected outing.

Eventually, she crossed state lines into nearby Indiana and made her way onto Interstate 69 before being corralled by a county sheriff and a handful of bystanders, Sports Illustrated reports.

Along the way, officials said, Bold and Bossy lost a couple of shoes, causing a lesion on one of her legs. She also suffered from dehydrated by the time she was caught. 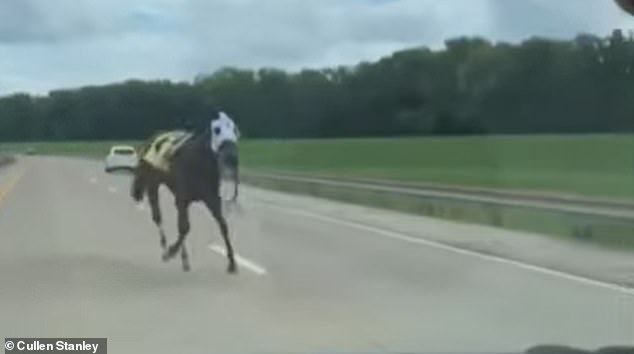 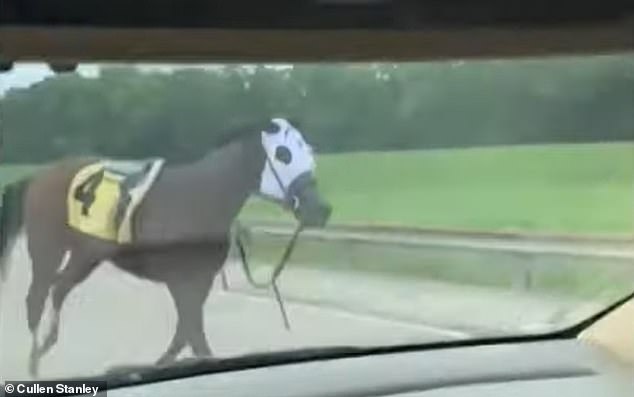 Bold and Bossy had run for several miles, even crossing state lines into Indiana, before eventually slowing down 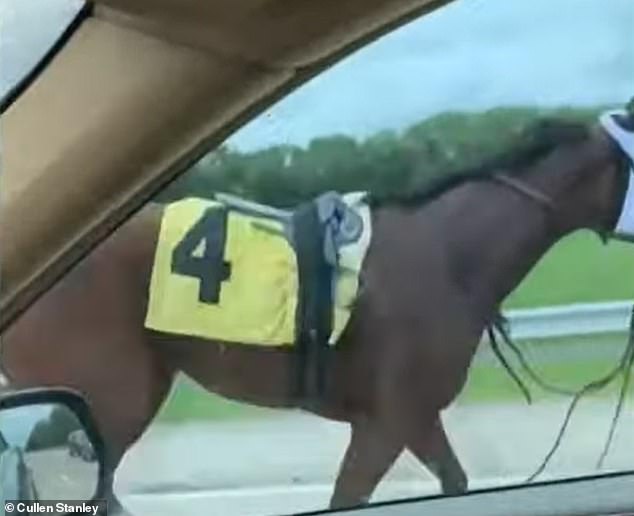 
Vanderburgh County, Indiana dispatchers said they first received a call about a horse on the loose from Ellis Park officials as Bold and Bossy made her way into the state at around 12.42pm.

Jack Hancock, a trainer who chased after Bold and Bossy on Saturday, said her blinders likely made it more difficult for her to stop, along with the unfamiliarity of the area.

‘She couldn’t see anything beside her, so that made it a little worse trying to catch her,’ he told the Associated Press.

‘I’ve been here all my life and I’ve never seen one to do a run like this – not this far and not that much highway.’

Sue Hartig and Gerald Summers later found the horse and were able to calm and slow her down as others arrived.

Shortly thereafter, Posey County Sheriff Tom Latham, who happened to be traveling down the interstate, saw Bold and Bossy, parked his truck and jumped over a guard rail to position himself in front of the filly.

He told 14 News he grabbed her lead and tried to calm her down, saying the horse was hot to the touch and had an injured back leg.

She had apparently lost two horseshoes, and a hind hoof heel knocked some flesh off the heel of a front foot during her escapade, but she wasn’t severely injured, the Associated Press reports.

The filly was also suffering from dehydration, officials said, and was cramping up even though the temperature was only in the mid 70s. But with the humidity, the National Weather Service said, it felt like 80 degrees.

Fortunately, one of the police officers at the scene had a gallon of water, and the rescuers gave her water out of their hands and put water on her head and back.

‘We checked her out pretty good while we were there,’ said Hancock.

He told the Racing Post she had just ‘superficial cuts [and] a little bit of blood.

‘But all in all, she was in great shape for what happened.’

She was not stuck by any cars and the horsemen there kept her on the scene until a horse ambulance arrived.

‘She was slowing down and saying “help me,” which they did,’ Ewing said of the rescuers. ‘They were so great. I do have to say, the racing community is so great.

‘Thank God for all the people who jumped in to go find her because she left town,’ Ewing said. 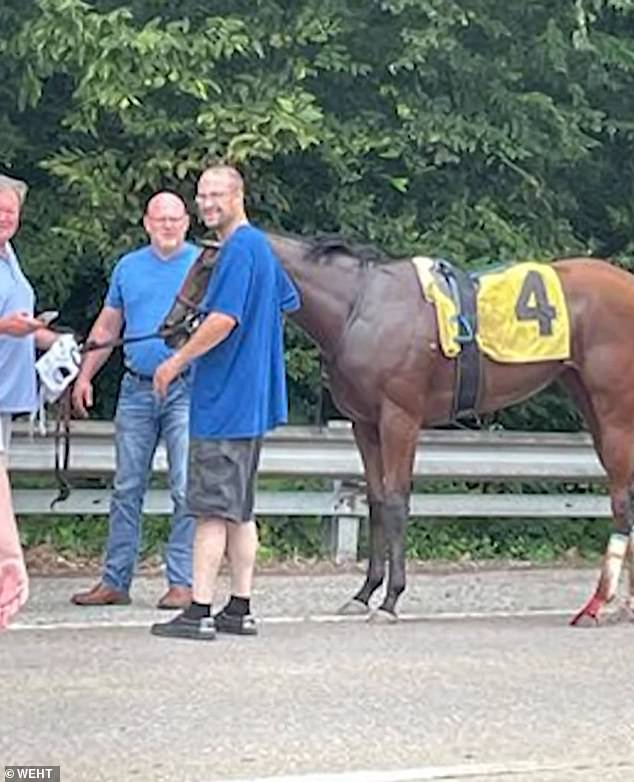 Eventually, a group of horsemen and local officials managed to catch the horse and provide her with water while they waited for a horse ambulance to arrive 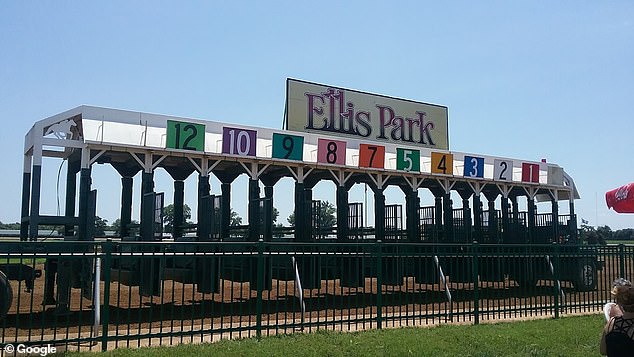 Bold and Bossy is now receiving fluids, Ewing said, with an onsite assistant saying the filly was ‘really dehydrated and severely tied up.’

She will return to her stable at The Thoroughbred Center in Lexington after being given time to recuperate at Ellis Park.

Ewing said the filly will also continue to undergo veterinary examination and would be given ample time to mentally and physically recover.

Although she said she is unsure whether Bold and Bossy will ever be able to compete, Ewing said: ‘Apparently, she can run.’

Grandmother, 49, is sectioned after grandson, 5, is stabbed to death

Grandmother, 49, is arrested and sectioned under the Mental Health Act after her five-year-old grandson was stabbed to death as his parents pay tribute to the 'most beautiful child in the world'David-Mario Lazar was ...