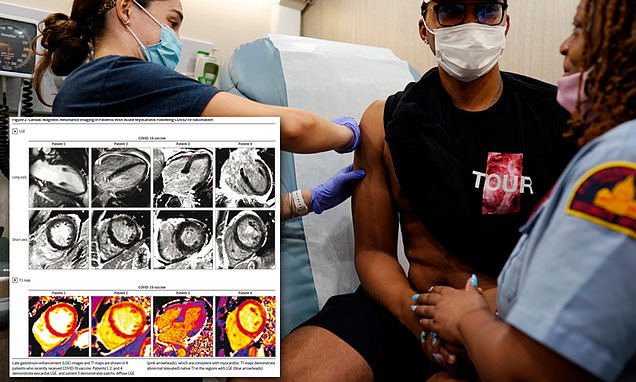 Rare heart inflammation linked to Pfizer and Moderna Covid vaccines is six times more likely to occur after second shot – but is still a less than one-in-100,000 side effect, study finds

Rare heart inflammation linked to COVID-19 vaccines is more common after the second dose than the first dose, a new study suggests.

Researchers from the U.S. Department of Defense (DoD) found that, in the early months of the vaccine rollout, 23 military service members experienced the rare side effect, known as myocarditis, following their shots.

Myocardtis was much more common after the final dose with 20 of the patients experiencing heart inflammation after getting their second shot of the Moderna or Pfizer-BioNTech vaccine compared to three after the first dose.

The majority of the patients, 16, had received Moderna shots.

The U.S. military has administered over 2.8 million doses of COVID-19 vaccines, making this side effect rarer than one in 100,000.

Still, further research is needed to study this side effect, which has been increasingly linked to male teenagers and young adults who’ve been vaccinated with Pfizer or Moderna in recent weeks. 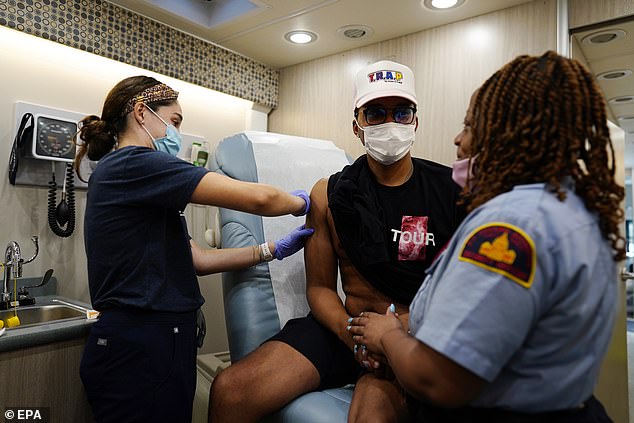 The Pfizer and Moderna vaccines may cause heart inflammation in very rare cases. Pictured: a civilian gets vaccinated at a site in the Navy Yard, Washington, DC 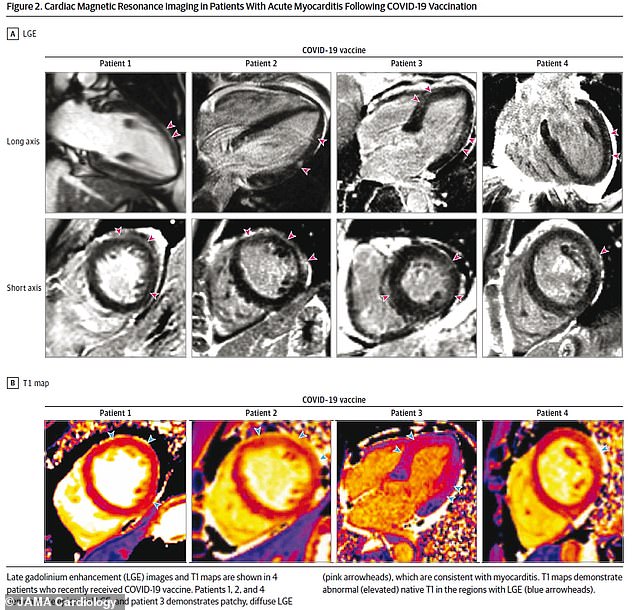 Myocarditis – or health inflammation – may be identified through imaging of a patient’s heart, showing unusual swelling of the heart muscles

As the millions of Americans who’ve gotten their shots now know, the Pfizer and Moderna vaccines come with side effects.

Most commonly, these two vaccines – which both rely on messenger RNA (mRNA) technology – give recipients sore arms, fatigue, and headaches. These vaccine reactions tend to be much milder than symptoms from the coronavirus itself.

However, doctors have recently found that these two vaccines can cause a heart condition in very rare cases.

The condition – called myocarditis – is an inflammation of the heart muscle, leading to chest pain and abnormal heart rhythms.

Myocarditis is commonly linked to viral infections, including the coronavirus. But recent reports have shown that it may also be caused by the mRNA Covid vaccines.

Last week, a Centers for Disease Control and Prevention (CDC) advisory group said there was a ‘likely link’ between these vaccines and myocarditis for young adults.

A new study – published Tuesday – from the DoD health agency provides further insight into this rare vaccine side effect.

The DoD researchers looked at medical records for service members who were vaccinated between January and April 2021.

They identified 23 patients who sought medical attention for chest pain after receiving a jab – all of whom were diagnosed with myocarditis.

These patients include 22 in current military service and one retiree; they were mostly young men, with a median age of 25.

All were previously healthy, with no history of cardiac disease or other risk factors. 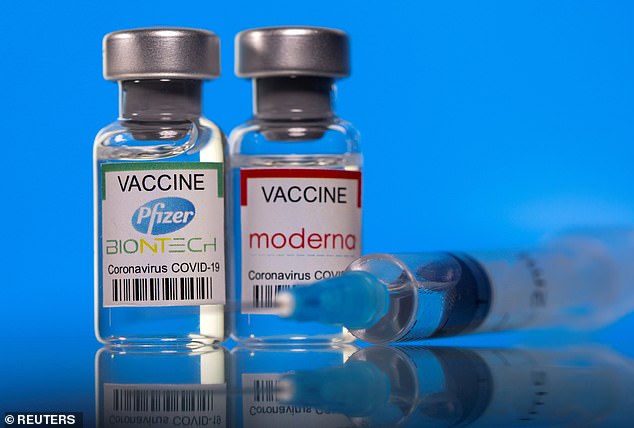 The service members started experiencing chest pain between 12 hours and four days after their shots.

Myocarditis was much more common after a second dose. Out of the 23 patients who experienced this side effect, 20 had it after their second dose.

The three patients who experienced heart inflammation after their first dose had previously been infected with Covid – which is likely to cause heart problems itself.

While myocarditis may lead to heart failure and other issues, patients can quickly recover with appropriate treatment.

Out of the 23 patients in the DoD study, 16 recovered within one week. The other seven were still experiencing some discomfort at the time the study was accepted for publication, on June 1. 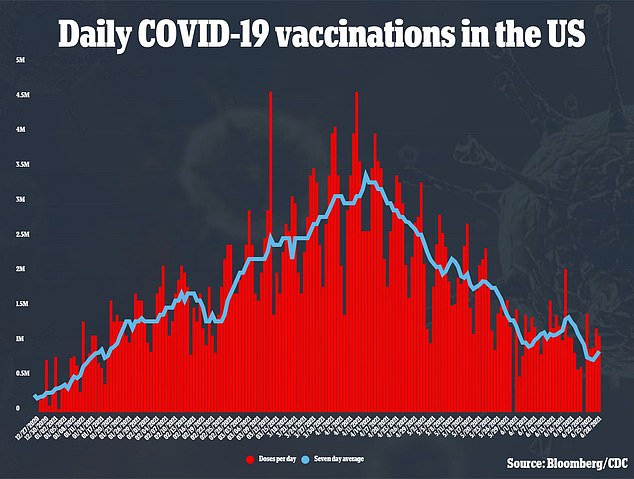 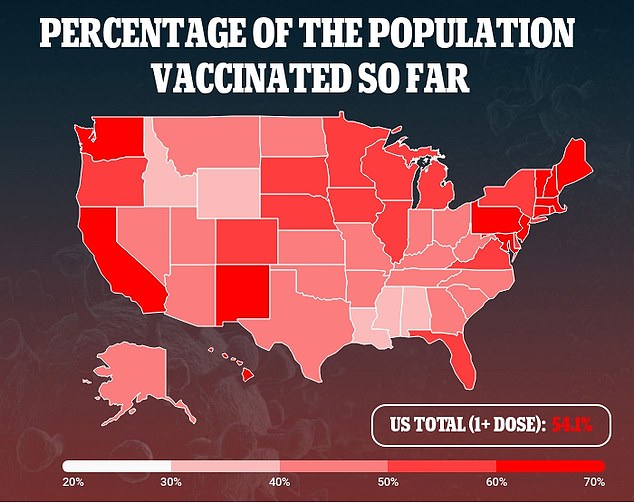 The U.S. military has administered over 2.8 million doses of Pfizer and Moderna vaccines. This makes myocarditis an extremely rare side effect, occurring in about 0.0008% of patients.

Still, more vaccine recipients have experienced this heart condition than doctors would expect to see in the general population.

That’s why CDC advisors said the condition was likely linked to vaccines last week – and why health agencies are continuing to carefully monitor vaccination data.

The DoD study was retrospective, meaning that the researchers looked at health records after vaccinations occurred.

There may have been more people who experienced mild chest pain after their shots but did not seek medical attention.

Another new study from the Duke University Medical Center – also published Tuesday – identified myocarditis in four patients who received their second vaccine doses between February and April, 2021. Three of the four patients were younger men.

While it is important to study this rare vaccine side effect, scientists have so far found it to be – like other side effects – much rarer and less deadly than potential complications from Covid itself.

As the DoD researchers note in their study, as many as 60% of severe Covid patients may experience cardiac injury.

That’s a much higher risk than the 0.0005% chance of myocarditis in young adults cited by the CDC. 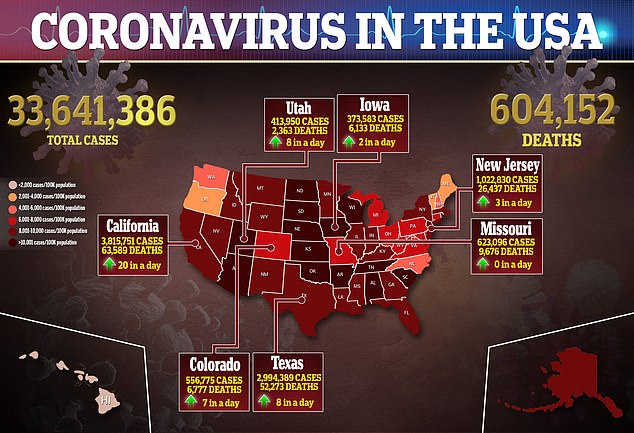 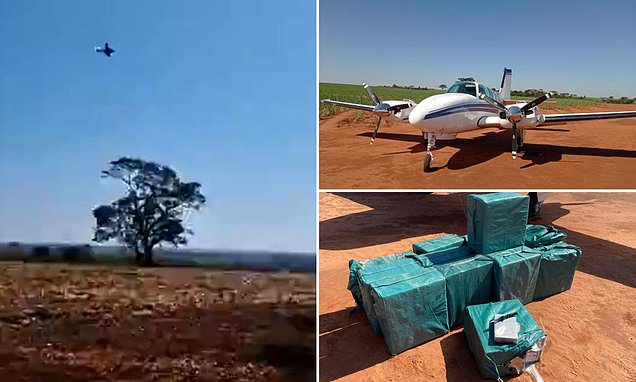 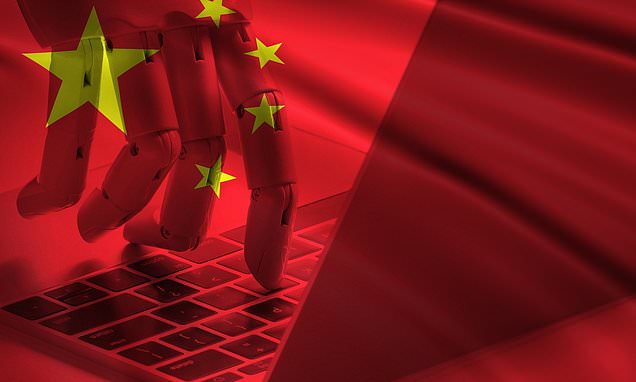 China claims to have developed an AI that can read the minds of Communist Party members to determine how receptive they are to 'thought education' in since-deleted articleThe AI system has been created by scientists ...