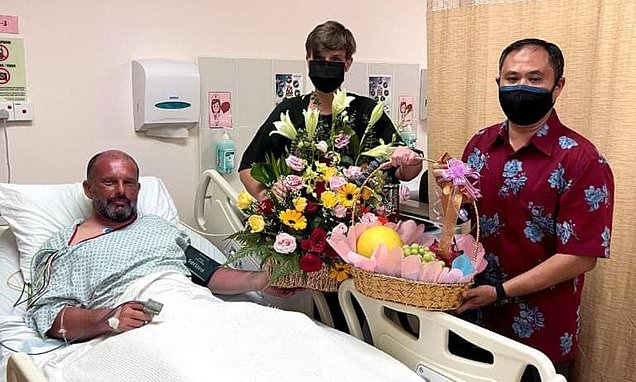 Sunburnt and grieving for his son, a British diver rescued after spending three days missing off Malaysia was yesterday recovering in hospital.

Adrian Chesters has told investigators that his Anglo-Dutch son, Nathen, 13, did not survive the ill-fated diving expedition after becoming exhausted.

The 46-year-old, who was found by fishermen after three days, was in intensive care last night.

Searches for Nathen’s body are still taking place and due to switch from Malaysian to Indonesian waters. 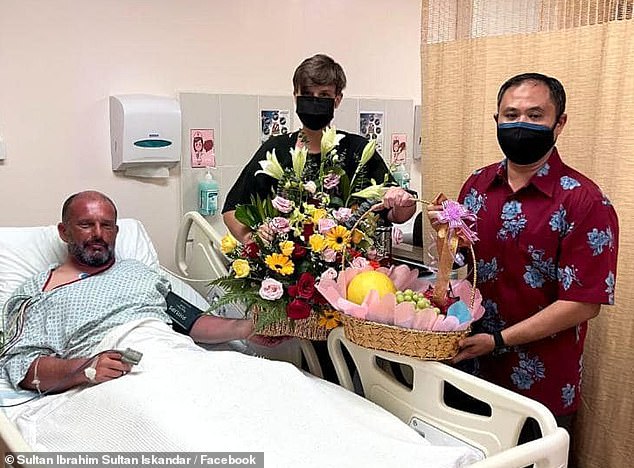 Recovering: Adrian Chesters and Alexia Molina receive gifts from a representative of the sultan. Mr Chesters has told investigators that his Anglo-Dutch son, Nathen, 13, did not survive the ill-fated diving expedition after becoming exhausted

Mr Chesters said Nathen died ‘as a result of being too weak … he was unable to survive’, a statement by the Malaysian coastguard revealed.

Shell oil engineer Mr Chesters, his son and Frenchwoman Alexia Alexandra Molina, 18, were with Norwegian instructor Kristine Grodem, 35, when they got into difficulties.

They surfaced from a 40-minute dive in waters nearly 50ft deep, near an island in the southern Johor state, but could not find their boat. 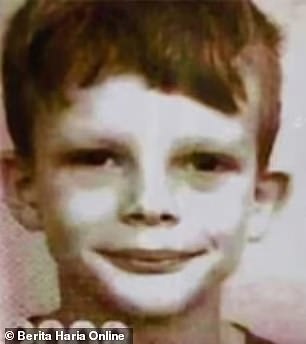 Mr Chesters said Nathen (pictured) died ‘as a result of being too weak … he was unable to survive’, a statement by the Malaysian coastguard revealed

Investigators believe the ship’s captain may have simply ‘abandoned’ them in the South China Sea and sailed to shore while high on drugs. He was later arrested after testing positive for amphetamines.

A search was launched, covering a radius of 100 miles and involving 30 divers, two planes and 18 boats.

Miss Grodem was rescued by a tugboat on Thursday, having drifted over 20 miles. Mr Chesters and Miss Molina were found at 1am on Saturday.

District police chief Cyril Edward Nuing said: ‘We have rescued two divers who were reported missing while doing scuba diving activities. They have survived and are now in hospital in a stable condition.

‘We believe there is a high likelihood that he [Nathen] is no longer in Malaysian waters, based on the movement of sea currents, as well as the time and location where the other victims were found.’

Mr Chesters and Miss Molina were visited in hospital by the Sultan of Johor’s representatives, who offered his best wishes for their recovery and presented them with flowers and gifts.

Yesterday, relatives – including Mr Chesters’ parents Neil and Carolyn – said they did not wish to make any comment about the tragedy.