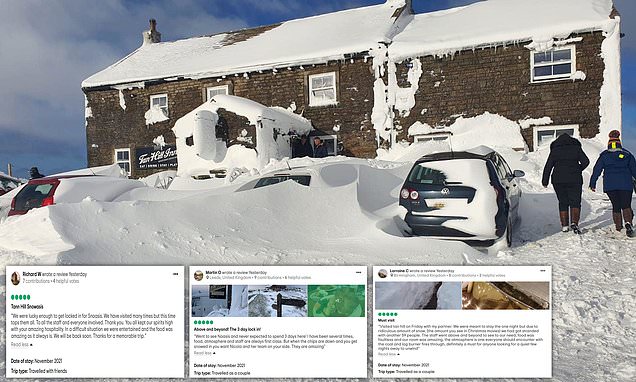 Rescued pub-goers have given glowing five-star Tripadvisor reviews to a boozer after a three-night lock-in caused by Storm Arwen’s heavy snowfall.

Scores of drinkers were freed from the Tan Hill Inn four days after adverse weather conditions meant the group were marooned atop the 1,732ft pub in the Yorkshire Dales.

More than 60 members of staff, punters and musicians from an Oasis tribute band were left stranded over the weekend after a snap blizzard left 3ft piles of snow.

The trapped customers did karaoke to raise their spirits, necking beers and sleeping on makeshift beds.

Pub goers claiming they were stuck inside the tavern have now said ‘thanks’ by raving about its electric atmosphere on Tripadvisor. 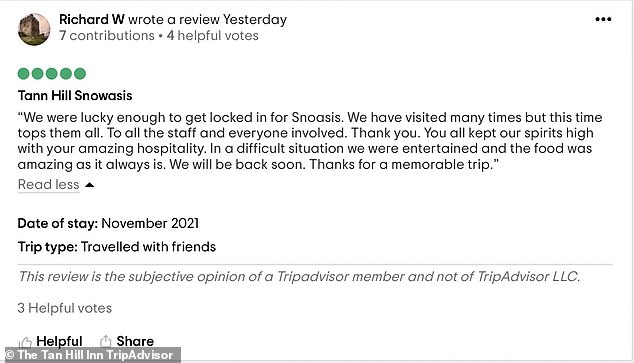 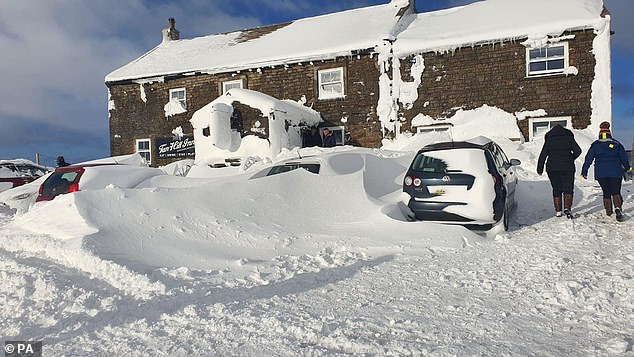 The Tan Hill Inn in the Yorkshire Dales is pictured, after 61 people became trapped there amid heavy snowfall caused by Storm Arwen 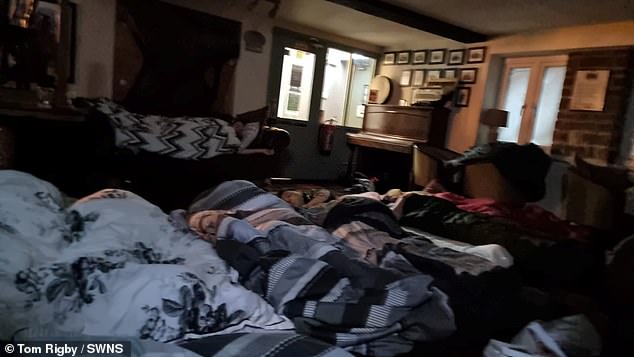 Waxing lyrical about the Yorkshire Dales inn, He added: ‘We were lucky enough to get locked in for Snoasis.

‘We have visited many times but this time tops them all. To all the staff and everyone involved. Thank you.

‘You all kept our spirits high with your amazing hospitality.

‘In a difficult situation we were entertained and the food was amazing as it always is.

‘We will be back soon. Thanks for a memorable trip.’


Another happy customer – Martin – also rated it five-star, saying: ‘Above and beyond the three day lock-in.’

‘I have been several times, the food, atmosphere and staff are always first class.

‘But when the chips are down and you get snowed in you want Nicola and her team on your side. They are amazing.’

As well as helping with the cooking and cleaning, Noasis provided most of the musical entertainment, because the group have been stranded at the historic pub – which at 1,732ft (528m) above sea level is the highest in the UK. They played their main gig on Friday night and played impromptu acoustic sets ever since.

On Saturday evening, guests thanked the seven members of staff stuck inside with them by presenting them with a jar filled with around £300 in cash. 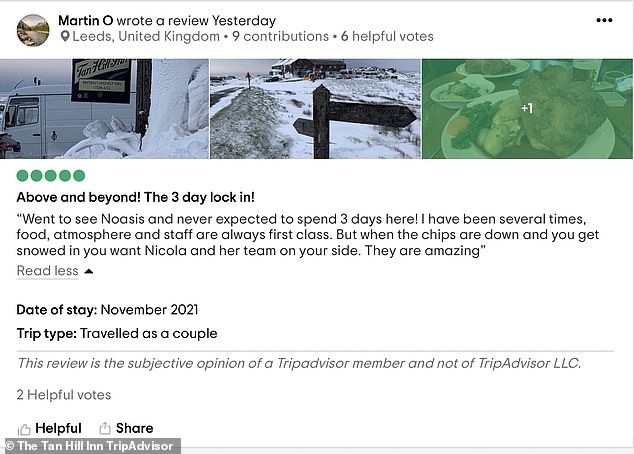 Another happy customer – Martin – also rated the boozer as five-star, saying: ‘Above and beyond the three day lock-in’ 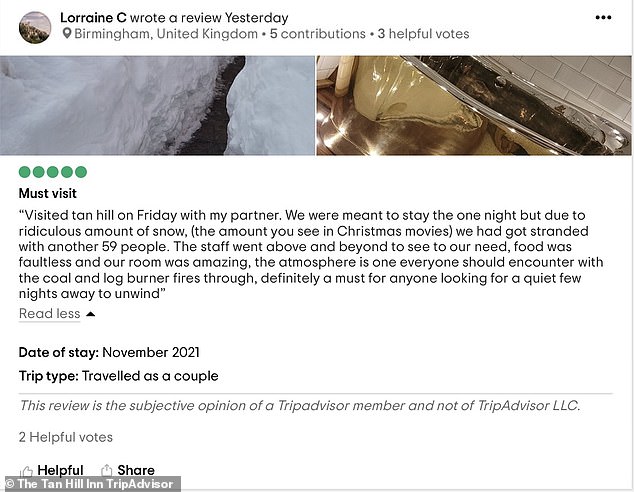 More than 60 members of staff, punters and musicians from an Oasis tribute band were left stranded over the weekend after a snap blizzard left 3ft piles of snow

The pub also laid on a traditional Sunday lunch before guests and staff worked together to decorate the bar for Christmas and prepare for an evening of karaoke.

A tunnel was quickly dug out of the front door of the pub, allowing punters to leave on foot, but nearby roads were unusable due to fallen power cables and icy conditions. 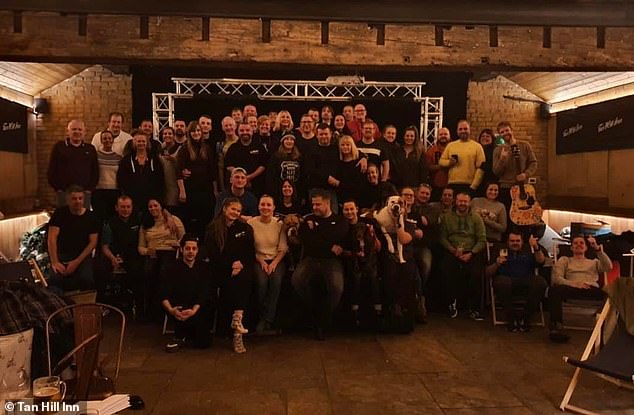 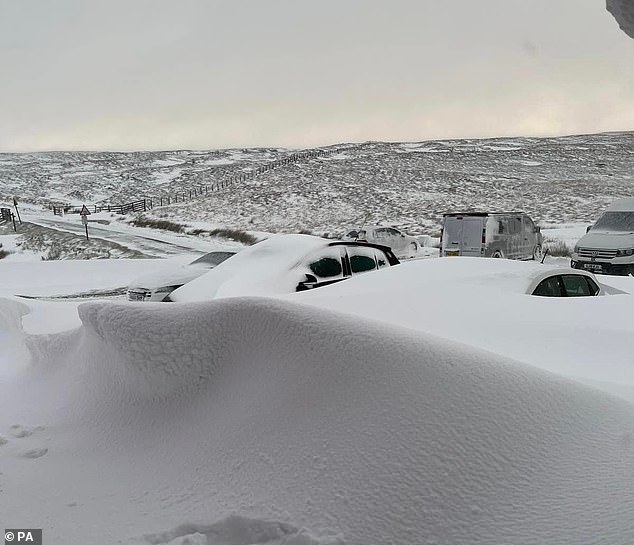 Pub-goer Lorraine says she also visited the boozer with her partner on Friday and got trapped.

She said: ‘We were meant to stay the one night but due to the ridiculous amount of snow, the amount you see in Christmas movies, we had got stranded with another 59 people.

‘The staff went above and beyond to see to our need, food was faultless and our room was amazing.

‘The atmosphere is one everyone should encounter with the coal and log burner fires through, definitely a must for anyone looking for a quiet few nights away to unwind.’

The pub has four out of five stars on Tripadvisor, based on nearly 1,600 reviews.

Its name on the review site is ‘The World Famous Tan Hill Inn’ – but it is not clear if this has been changed in light of the recent news story. 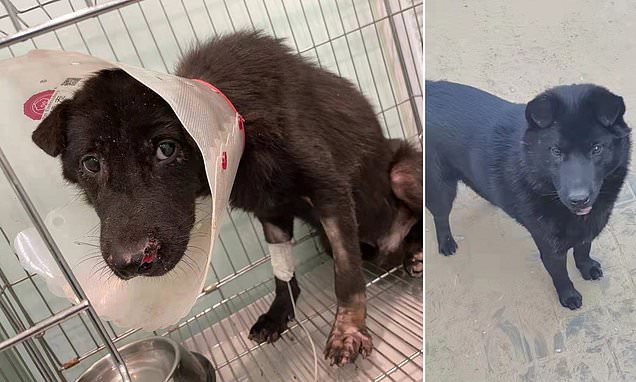 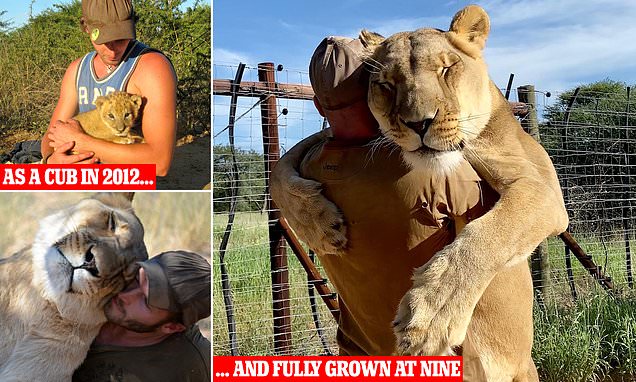 Feline good! Man gets a tender morning cuddle from the fully-grown lion he rescued as a sickly cubConservationist Valentin Gruener is like a father to nine-year-old lion Sirga He rescued her as a sickly cub in 2012 w...

Moment 53 dogs are rescued from meat trader truck in Indonesia

Rescued - moments before they were slaughtered: 53 dogs are discovered tied up in sacks in the back of a truck as they're being transported by Indonesian meat traderPolice and animal campaigners intercepted a meat tr...