RICHARD LITTLEJOHN: How can Labour argue that telling the truth? 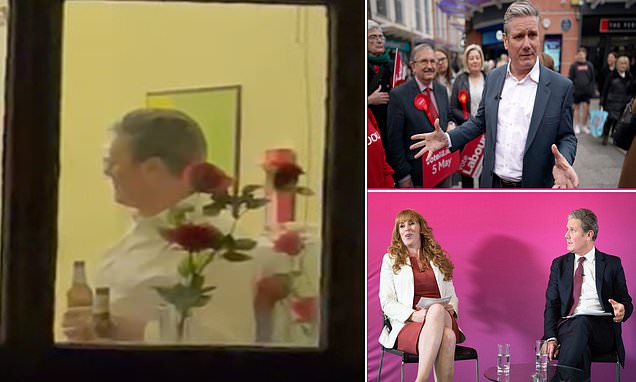 RICHARD LITTLEJOHN: How can Labour leadership argue that telling the truth about flouting of lockdown rules is a ‘Tory smear’? Keir Starmer’s Beergate hypocrisy is why people who live in glass bottles shouldn’t throw mud

People who live in glass houses, and all that. Keir Starmer and Angela Rayner would have done well to remember the old adage before they started slagging off the Tories for ‘partying’ during lockdown.

To absolutely no one’s surprise, the breathtaking hypocrisy of the Labour leadership is out in the open for all to see. While Starmer and Angie Baby have been demanding piously that Boris should not only resign but be prosecuted to the fullest extent of the law, they were equally guilty of breaking Covid rules.

At least the Prime Minister has a plausible excuse for his proximity to birthday cake and prosecco.

He actually lives and works in 10 Downing Street, where his high crimes and misdemeanours are alleged to have taken place.

No such defence can be mounted on behalf of Labour’s gruesome twosome over their participation in a beer and biryani bash at Durham Miners Hall. 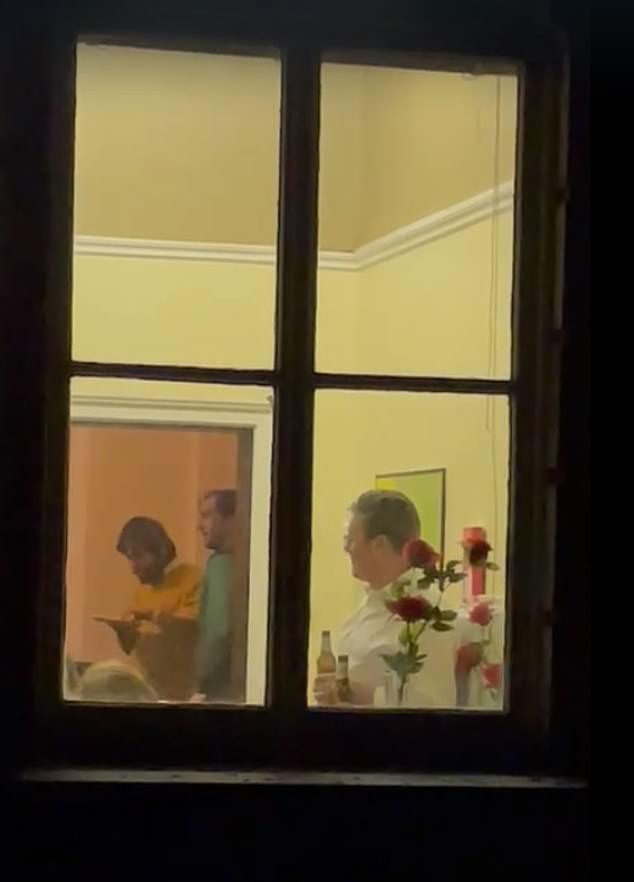 It was gone 10pm when Starmer was seen swigging from a bottle of beer in the company of up to 30 other people, after a driver told the Mail he had delivered four bags of curry, rice and naan bread from the Rajah’s Revenge.

For months, Labour even denied that Rayner was there, until the truth came out last week. The local Labour MP Mary Foy was also present.

All this took place back in April 2021, when socialising with people outside your ‘bubble’ was strictly verboten.

Yet Starmer still insists: ‘We were working, we paused for something to eat, there was no party, no rules were broken, and that is the long and short of it.’

Couldn’t the same also be said of the Prime Minister and Chancellor Rishi Sunak, who was clobbered with a fine after arriving for a scheduled meeting at which cake was produced? 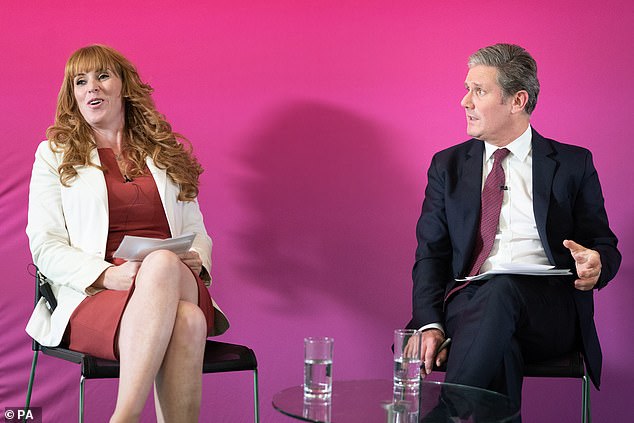 Boris didn’t even eat the cake, despite his reputation for being both in favour of having cake and eating it.

That cut no ice with Scotland Yard’s crack prosecco squad, which handed out fixed penalty notices all round with great fanfare and is threatening more to come.

Starmer and Labour, amplified by the BBC, Sky News, the Daily Mirror and the Guardian, screamed blue murder. The Prime Minister was a criminal, they protested, and unfit to hold high office. He must go forthwith, preferably to the Tower.

Embittered Remainers were convulsed with self-righteous fury. Yet when Starmer was caught bang to rights committing a similar offence, Durham Plod — answerable to a Labour police and crime commissioner — shamefully declined to investigate.

You’d have thought that someone who never misses an opportunity to boast about his time as Director of Public Prosecutions would have taken more care over the evidence.

He continued to pretend that Rayner wasn’t anywhere near Durham Miners Hall that night, right up until the point the Mail presented him with video proof.

Then, when confronted with the conclusive film, he tried to say it was an oversight, a genuine mistake. As if you could forget in-yer-face Ange was there. She’s hardly a shrinking violet.

Starmer also maintains that after downing a Ruby Murray and a bottle of Spanish lager, he went straight back to work. At half past ten, or thereabouts, on a Friday night?

Any half-decent lawyer would immediately ask himself: does this alibi hold water? Does it have the ring of truth? On the balance of probabilities, would a jury swallow it?

Curiously, the driver who delivered the food and spoke to the Mail subsequently had an attack of amnesia after speaking to his manager, pictured in yesterday’s paper posing for photos alongside local MP Foy.

Would a former DPP accept this sudden loss of memory if the driver was a witness under oath?

What do you think?

As the Mail has demonstrated beyond reasonable doubt, the evidence was there for anyone who cared to look for it. But disgracefully, the Left-wing media didn’t want to know initially. Now, though, as a result of this newspaper’s determined digging, the worms are turning.

To her great credit, at the weekend Sky’s Sophy Ridge nailed Starmer over his weaselly evasion and dissembling. Even Channel 4’s resident, lemon-sucking Guardianista Krishnan Guru-Murthy says the Labour leader has a ‘host of questions’ to answer.

Not admitting Rayner was at the Durham party — sorry, ‘work event’ — was a mistake, Starmer has finally admitted. No it wasn’t, it was a barefaced lie.

But we are asked insultingly to move along, nothing to see here. That’s because the Left self-define as ‘good’ people, thus can do no wrong.

How else can the Labour leadership argue that telling the truth about their blatant flouting of the lockdown rules is a ‘Tory smear’?

Look, for what it’s worth, I couldn’t care less whether Starmer had a mutton madras and a bottle of lager at the Durham Miners Hall. But then, equally, I can’t get excited about whether or not Boris had a slice of birthday cake and a glass of Chateau Collapso.

Where I part company with the political class — as I suspect most of you do — is the impression they give that the rules they make for us don’t apply to them. 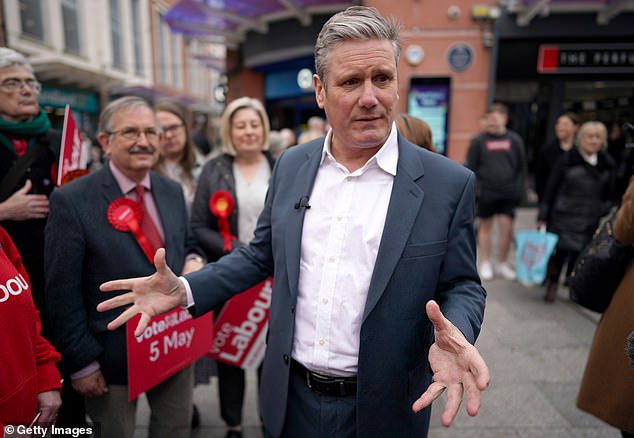 RICHARD LITTLEJOHN: People who live in glass houses… Starmer and Rayner would have done well to remember the old adage before they started slagging off the Tories for ‘partying’ during lockdown (Keir Starmer pictured in April)

And that goes as much for Labour as it does for the Conservatives. Don’t forget that Starmer was just as gung-ho for lockdown as the Tories.

His only dissent from the Government line was that the rules didn’t go far enough.

It was Starmer who howled that Scotland Yard must investigate alleged ‘parties’ at Downing Street. His confected, crimson-faced outrage would be hilarious were it no so deceitful, especially as we now know that he, too, was breaking the rules, along with his gobby deputy.

After 50-odd years in this game, I barely recognise the modern media landscape, where myth and fake news have replaced truth as common currency.

Some of us knew beyond any doubt ten days ago that Angela Rayner was herself the source of the Sharon Stone/Basic Instinct story. (Although she’s always reminded me more of the late Kenny Everett’s alter ego, Cupid Stunt.)

Yet for the best part of a week we had to watch with incredulity as this foul-mouthed fishwife was portrayed as a shy and retiring ‘victim’ of Tory sexism.

The sheer, cynical dishonesty of someone who could well end up a heartbeat away from the next Labour Prime Minister is outrageous, if not entirely unexpected.

So, too, is the culpability of the Boys and Girls In The Bubble and the broadcast media, who allowed Rayner to peddle this intelligence-insulting fantasy while posing as Stockport’s answer to Mother Teresa, rather than the lairy ladette best known for growling ‘Tory scum’ at any passing Conservative.

These are the murky depths to which British politics has sunk.

We’ve got a full-blown cost of living crisis, the collapse of essential services because bone-idle civil servants refuse to go back to work, and the threat of World War III breaking out, as a basis for negotiation.

We’ve got more important things to worry about than whether BoJo scoffed a slice of cake or Starmer swigged a bottle of San Miguel more than a year ago.

Litigating technical breaches of Covid lockdown is a complete waste of time and energy.

Scotland Yard’s prosecco squad should be stood down and every fine issued for breaking social distancing rules should be rescinded immediately.

In the spirit of truth and reconciliation, cardboard cut-out Starmer could start by dropping his bogus protestations of innocence, stop smearing Boris as a criminal and simply say ‘sorry’. 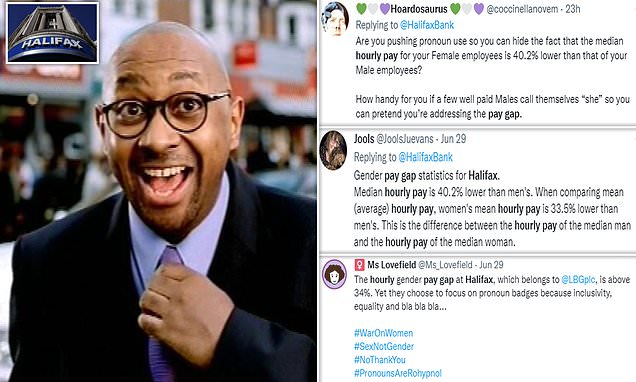 RICHARD LITTLEJOHN: Woke Halifax should wake up and Bring Back Howard!

RICHARD LITTLEJOHN: How dare companies tell their customers what to think or they can get lost? Woke Halifax should wake up and Bring Back Howard! Remember Howard? He was the bank clerk from Birmingham who shot to fa... 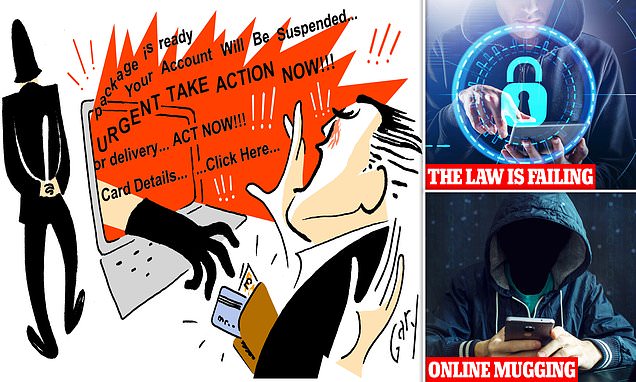 RICHARD LITTLEJOHN: Scambusters? No, sorry.. the wrong kind of coppers

RICHARD LITTLEJOHN: Scambusters? No, sorry... the wrong kind of coppers. It's no wonder the annual fraud haul is around £3 billion a year. But law enforcement has failed to keep pace The email from ‘BTINTERNET’ telli...