Russia is warning that new tests of its deadly hypersonic Satan-2 missile are imminent and on the brink of going into ‘serial production.’

Vladimir Putin‘s space chief Dmitry Rogozin has been seen inspecting the giant weapon as it was taken into a forest by rail.

‘The world’s most powerful global-range nuclear-tipped missile is being prepared for new tests and serial production,’ said Mr Rogozin. 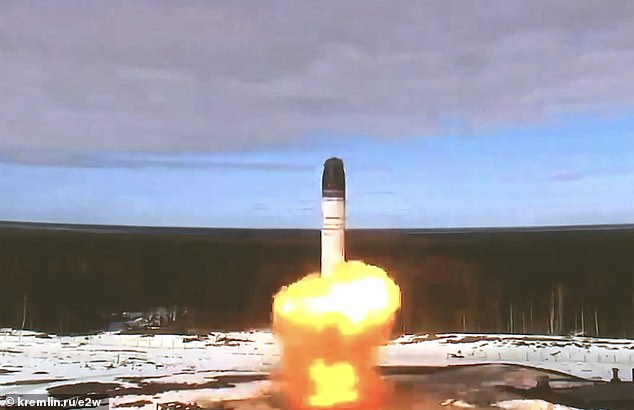 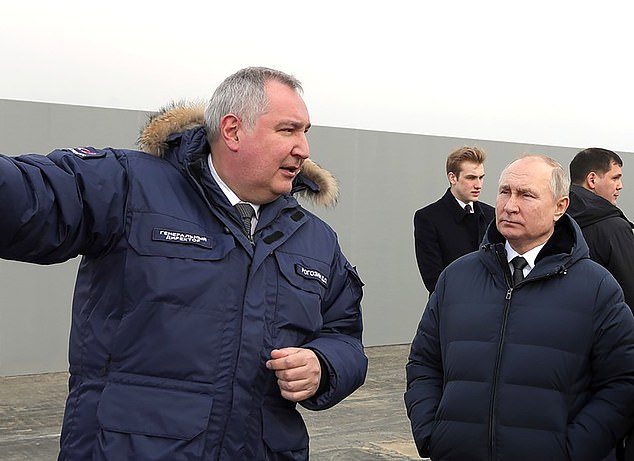 Russia state TV and politicians have regularly suggested deploying the missile during the Ukraine crisis.

The Roscosmos chief recently visited the Krasmash defence plant in Krasnoyarsk, in eastern Siberia, to inspect the process of producing Sarmat for flight tests. 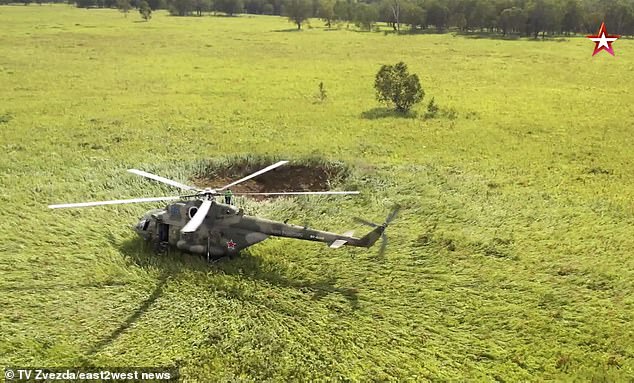 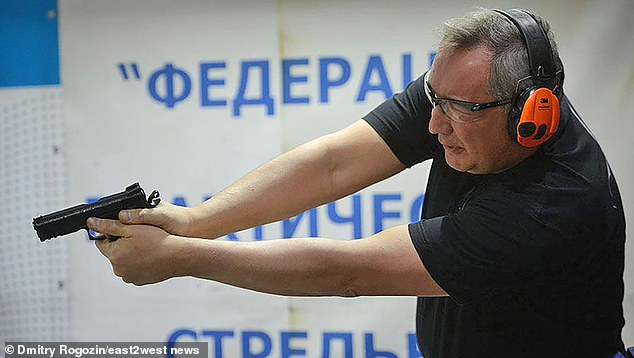 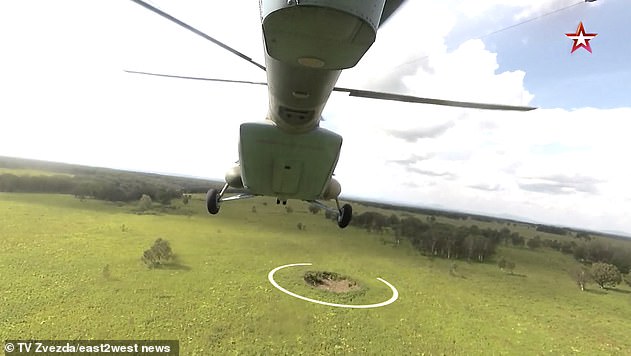 Mr Rogozin highlighted a 26ft deep crater made at the Kura test site by the missile without a nuclear warhead Pictured: Kura training ground with missile crater circled

The first and so far only test launch of a silo-based Satan-2 was on 20 April from the Plesetsk Cosmodrome in northern Russia.

Russia is developing a new laser system in the Greater Caucasus mountain range that will disable foreign satellites passing over Russian territory, an open-source investigation published last week by The Space Review found.

Construction of the Kalina project, which started in 2011, is underway in the Krona space surveillance complex located at the Chapal mountain peak, the report found by analyzing recent satellite imagery from Google Earth and documents from Russian industrial contractors.

Kalina’s goal, as written in a bank guarantee document from January 2014, is ‘creating a system for the functional suppression of electro-optical systems of satellites’ using lasers.

The ‘space security complex,’ as it is described in a 2017 document, is a ‘special quantum-optical system’ to be used for ‘electro-optical warfare,’ according to Precision Instrument Systems (NPK SPP), a Russian scientific and industrial corporation, who was given the contract for the project by the Russian Defence Ministry.

Kalina features a new telescope used to accurately aim laser beams at satellites, housed in a specially-constructed building built to withstand earthquakes up to magnitude seven.

The laser beams are routed via mirrors and enter and the telescope through an opening on its side, after which they are reflected back, causing them to form an image of the targeted object in a detector.

The project has been delayed several times and progress has been extremely slow, the report noted, citing a newsletter published by the contractors in 2016. One possible setback came in the form of the liquidation of NPTs Femto, the company tasked with developing an adaptive optics system for the project, in 2021.

Kalina is the latest of a new generation of Russian laser systems developed in recent years including a mobile laser system first announced by President Vladimir Putin in 2018 which Moscow said had advanced so far it could blind orbiting satellites and destroy drones.

Despite this, Russia is committed to commissioning the missile with the country’s strategic rocket forces by the end of the year.

In April, close Putin ally Mr Rogozin said there would be ‘a few more tests to prove the systems compliance with the technical parameters set by the chief client – the Defence Ministry’.

He has also said it would be commissioned no later than autumn which suggests there will be several upcoming tests.

The weapon is about the size of a 14-storey tower block and Mr Rogozin has said that Satan-2 is far ahead of anything the West has.

He said recently: ‘As for technical performance, what they have in their arsenal certainly lags behind what we have.

‘They lag especially far behind in terms of the designed capabilities of our Sarmat heavy intercontinental ballistic missile, which have been confirmed in the first test launch.’

The space chief also claimed that when he was at the production facility of the missile, which he called the ‘Doomsday Plant’, he was at the ‘safest place in the world’.

‘We are standing under the cover of the formidable Sarmat, created with great love and respect by our military factories and assembled at Krasmash to continue its flight design tests.

‘This is the safest place on Earth.’

Putin has said the missile would ensure Russia’s security and make ‘those fierce people who are trying to threaten it’ think twice.

There would be ‘no analogues to this weapon in the world for a long time to come’.

After the April launch, Mr Rogozin highlighted a 26ft deep crater made at the Kura test site by the missile without a nuclear warhead.

‘With a nuclear charge, such a crater at an enemy site will be…well, very large and very deep – and radioactive.

‘And we will soon have almost 50 such Sarmats (the missile is called Satan-2 in the West) on combat duty.

Mr Rogozin himself has previously threatened to unleash Sarmat on the West.

He mocked an alleged report that Boris Johnson had threatened to deploy Britain’s nuclear missiles without consulting NATO.

Mr Rogozin threatened: ‘Boris, if ‘Sarmat’ is used, none of you will ‘consult with each other’.

‘And there will be no one to style your hair, Mr. Prime Minister.’