EXCLUSIVE: Britain’s oldest school received ‘major’ donation from Russian oligarch who has now been sanctioned over Ukraine war: £41,000-a-year King’s School in Kent was handed cash between 2011 to 2018 from billionaire friend of Vladimir Putin

Britain’s oldest school accepted a ‘major donation’ from a close ally of Vladimir Putin who has now been sanctioned by the UK over the Ukraine war.

A MailOnline investigation found The King’s School in Canterbury, Kent – which charges £41,000-a-year for boarding pupils accepted money from a company founded by and run by Dmitry Mazepin, 64.

It is unclear exactly how much cash Russian fertiliser producer Uralchem JSC gave to the school, but it was listed as a ‘major benefactor’ between 2011 and 2018.

Uralchem manufactures a number of chemicals including ammonium nitrate and has its headquarters in Moscow.

Belarus-born Mr Mazepin is accused of being in the ‘closest circle of Vladimir Putin’ by the EU who imposed sanctions on him earlier this year after the invasion of Ukraine. The UK soon followed suit with their own restrictions. His son Nikita, who was an F1 driver for Haas before he was sacked, was also targeted after benefiting from his father’s cash.

The sanctions include an asset freeze and EU companies and people are banned from making money available to them. They are also subject to a travel ban.

Days after the EU restrictions were imposed, Mr Mazepin resigned as CEO of Uralchem and sold 52% of his 100% stake in the company.

The billionaire was pictured meeting Putin on January 14, just one month before the military advance stunned the watching world on February 24.

He is also said to have met the Russian president on the day the invasion happened, among other businessmen, to discuss what the imposition of sanctions might mean.

King’s has close associations with Russia, accepting money from five other companies or parents – none of whom have become subject to UK sanctions.

A recent visit to Moscow saw the then head teacher Peter Roberts take a delegation of adults from the school to the capital in 2019.

Both Uralchem and the school have failed to answer any questions about donations and Mr Mazepin.

An anti-corruption charity called it ‘incredibly concerning’ and the chair of the All-Party Parliamentary Group on Anti-Corruption & Responsible Tax Dame Margaret Hodge said ‘our defences against dirty money have been overrun’.

Dame Margaret, Labour MP for Barking, told MailOnline: ‘Russian oligarchs only get and keep their wealth because they are close to Putin. They then launder that corrupt, stolen wealth into the UK. 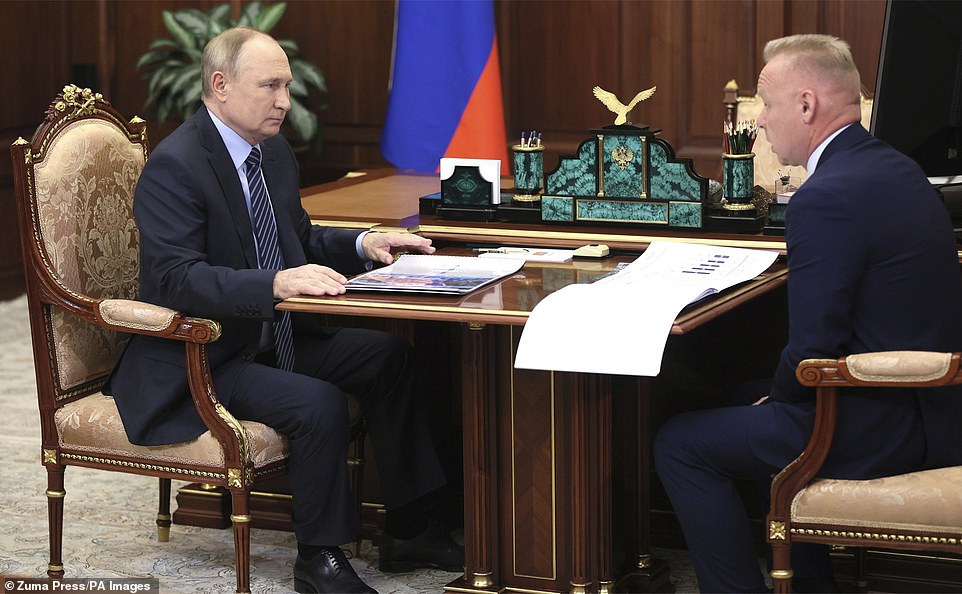 Billionaire Dmitry Mazepin was pictured meeting the president on January 14, just one month before the military advance stunned the watching world on February 24 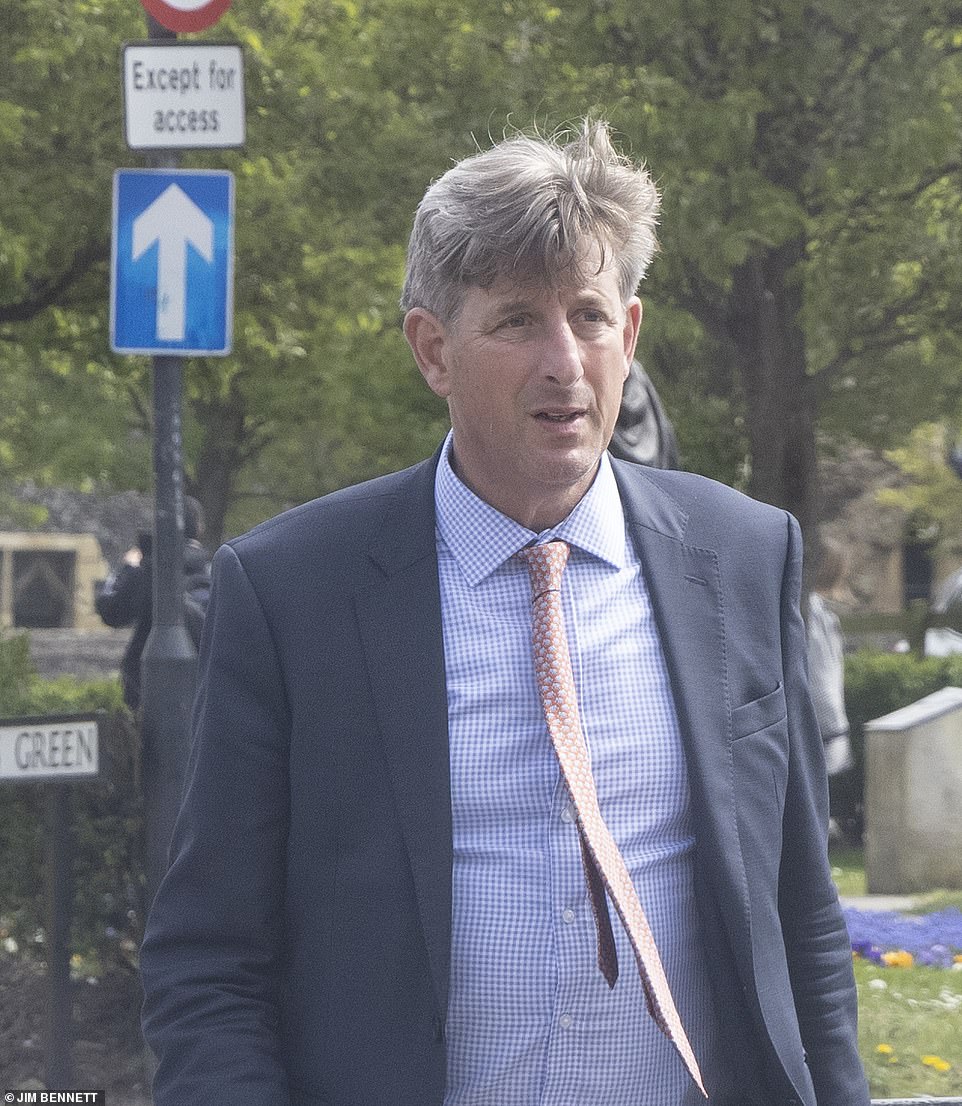 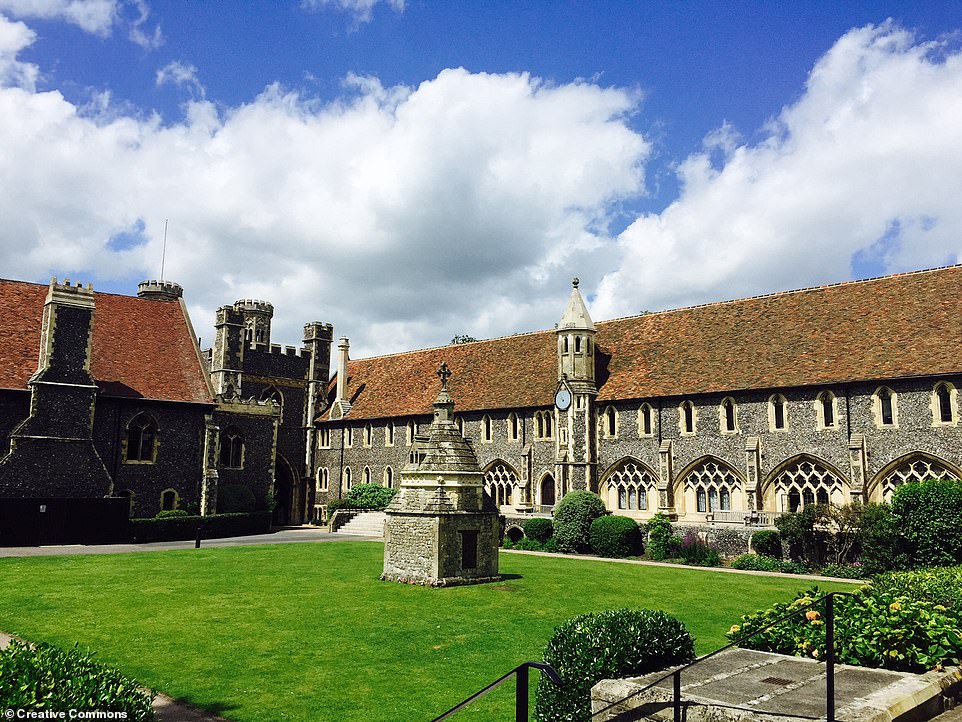 King’s School charges £41,000 a year for boarding fees and has Orlando Bloom and David Gower among its famous alumni

‘Our defences against dirty money have been overrun and that means it finds its way into British institutions, like our schools.

‘The Government must swiftly act to stop Britain being the jurisdiction of choice for money launderers and our schools must carry out proper due diligence to stop accepting students funded by oligarchs. Schools must be places of education, not safe havens for dirty cash.’

Susan Hawley, the Executive Director of Spotlight on Corruption, said: ‘It is incredibly concerning that a school has been receiving money from someone who is now sanctioned by the government.

‘The whole education sector needs to get a firm grip on the risks of accepting money from actors in states that are hostile to the UK.’

Mr Mazepin was first hit by sanctions from the EU on March 9 in a 64-page document.

It mentioned an alleged February 24 meeting as proof of his closeness to the Russian president.

The document said: ‘The fact that he was invited to attend this meeting shows that he is a member of the closest circle of Vladimir Putin and that he is supporting or implementing actions or policies which undermine or threaten the territorial integrity, sovereignty and independence of Ukraine, as well as stability and security in Ukraine.’

He was then targeted by the UK Government on March 15 over his position on the Board of Directors for Uralchem Group and his role as CEO of that JSC division company.

The Office of Financial Sanctions Implementation say ‘He is or has been involved in obtaining a benefit from or supporting the Government of Russia’. 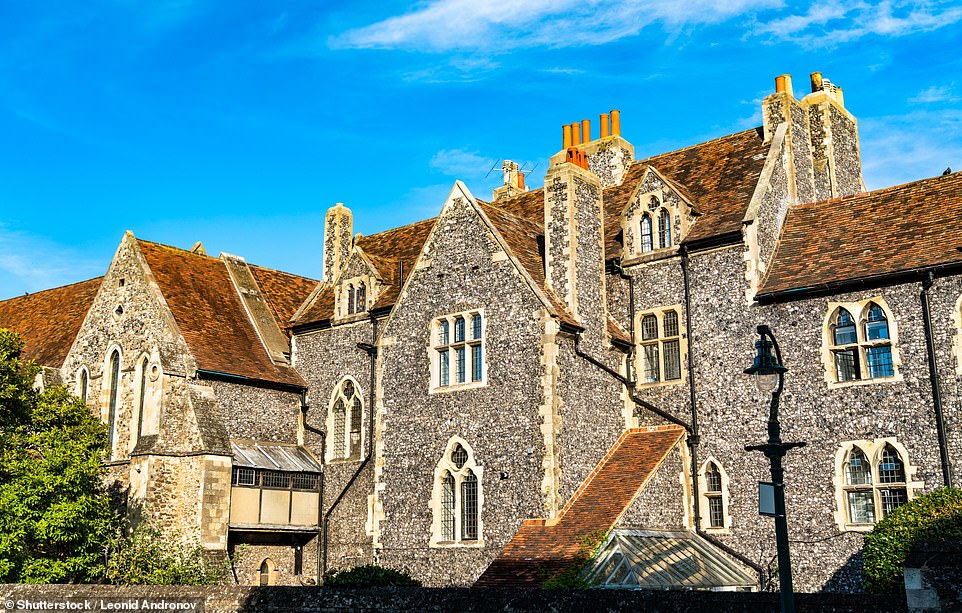 The King’s School, which is Britain’s oldest public school, is in Canterbury and has seen many famous names through its doors

January 14, 2022 – Russian President Vladimir Putin holds a meeting with Dmitry Mazepin, CEO of Uralchem. The topic of the meeting is described as a discussion of the mineral fertiliser industry.

February 24, 2022 – Russia invades Ukraine. The EU says Dmitry Mazepin met Putin alongside 36 other businesspeople to discuss the impact of Western sanctions on Russia.

March 9, 2022 – Dimitry Mazepin and his racing car driving son are hit with sanctions by the EU.

March 15, 2022 – The Mazepins are both hit by UK sanctions after the government looks at their status, business activities and links.

It adds that the chemical sector is ‘Of strategic significance to the government of Russia’.

By then Uralchem had announced he had stepped down as CEO and sold 52% of his 100% shares in the company.

The Russian firm makes a wide range of chemical products, including mineral fertilizers and ammoniac saltpeter.

It was founded by Mr Mazepin in 2007 and he was the £94.2billion firm’s CEO, with his son Nikita a former board member.

Mr Mazepin is also known for sponsoring the Formula One Haas team, where his son drove until very recently.

A document seen by MailOnline lists Uralchem JSC as ‘Major Benefactors’ and responsible for supporting King’s from 2011 to 2018.

Meanwhile the school too had a change at the top of its management organisation around the time of the Ukraine war breaking out.

On March 7 King’s Chairman of Governors Rev Dr Robert Willis announced Peter Roberts was to retire as the head teacher.

He told staff in the note it was a decision the head had not taken lightly and he and his wife planned to retire to France.

It added: ‘You will appreciate that with the devotion that he has to you, and to every aspect of the school, this is not a decision that has been taken lightly.’

King’s – which have famous alumni including Orlando Bloom and David Gower – takes money from a number of donors.

But it has also fostered close ties with Russia.

In March 2018 King’s Director of Development spoke of their visit to Moscow to attend the World Schools Show. 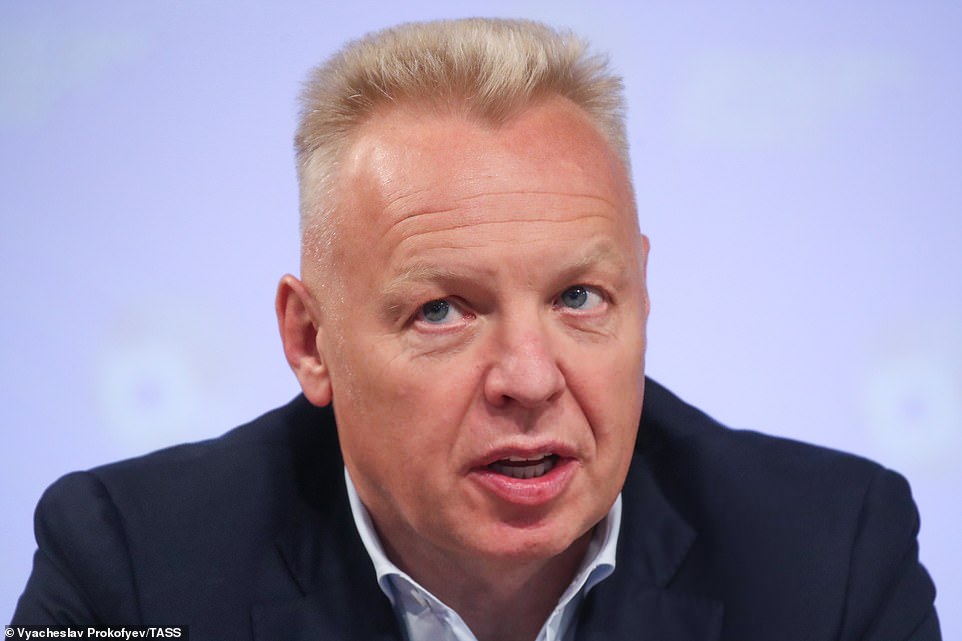 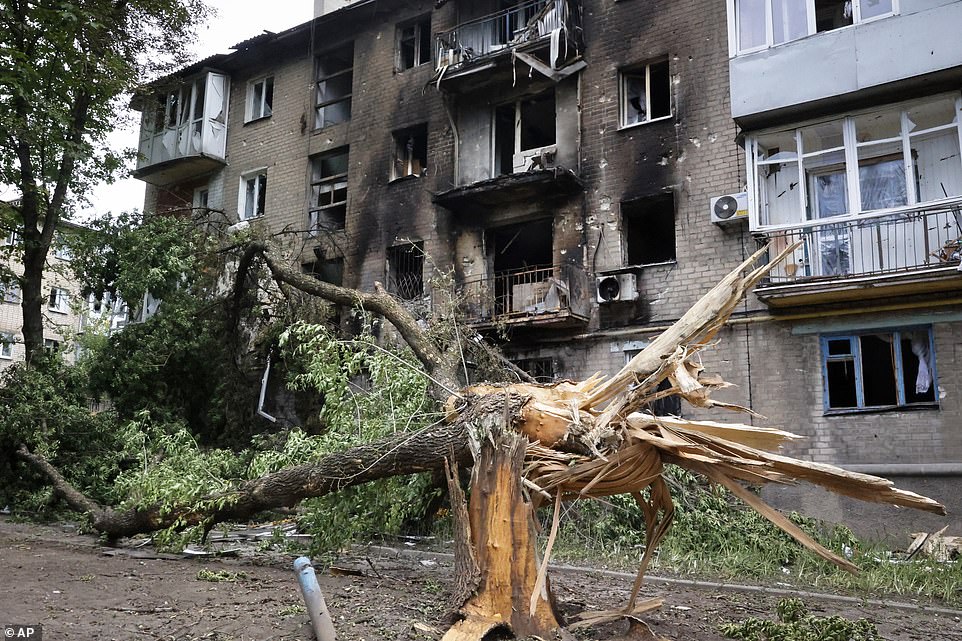 A view of an apartment building damaged during shelling in Donetsk, months on from the Russian invasion in February

They said it was to introduce the King’s School, Canterbury International College to local families and educational agents.

The director said at the time: ‘King’s reputation for and evidence of success, as well as its very broad offering of facilities and subjects, is unrivalled, and it was very encouraging to meet so many parents who want the very best education for their children. The International College is the newest part of our ancient school and we are excited at the number of inquiries we are receiving.

‘The King’s family is a truly global community and it is important to us to keep in touch and build a strong network of support. Moscow is a beautiful city and it was a pleasure to spend time in such good company.’

And during the Mr Roberts-led 2019 delegation to Moscow a huge donation to the school was also revealed.

A report on the visit said: ‘Dmitry Mendeleev, a direct descendant of the world famous Russian scientist of the same name, who had kindly donated enough to enable a new science laboratory to be built- what largesse.’

King’s School and Uralchem did not respond to requests for a comment.

Mr Mazepinis understood to have filed lawsuits at the EU Court of Justice to try and reverse the sanctions, which they say are unjustified.