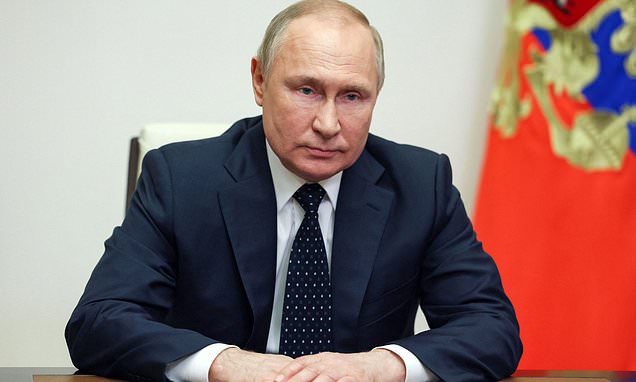 Murderous Russian troops have launched ‘hunt to kill’ missions to purge top Ukrainian officials in the east of the country.

Regional leaders are said to be constantly on the move to avoid death squads reminiscent of the ‘Red Terror’ carried out by Bolsheviks after FirstWorld War according to the police chief in the Luhansk region of the Donbas.

As the Kremlin yesterday hailed fresh advances, including taking Lyman, a city in the neighbouring Donetsk region that gives Vladimir Putin a bridgehead deeper into the Donbas, chief Oleg Grigorov said: ‘Heads of local administration, including myself, we are constantly on the move. The Russians are hunting for our heads, be it capture or outright liquidation.’

Putin’s forces are now in control of 95 per cent of Luhansk. In his nightly address, Ukrainian President Volodymyr Zelensky admitted the situation was ‘difficult’, but added: ‘Donbas will be in Ukraine because this is us, this is our essence. And even if Russia brings destruction and suffering there, we will still restore every city and every community.’ 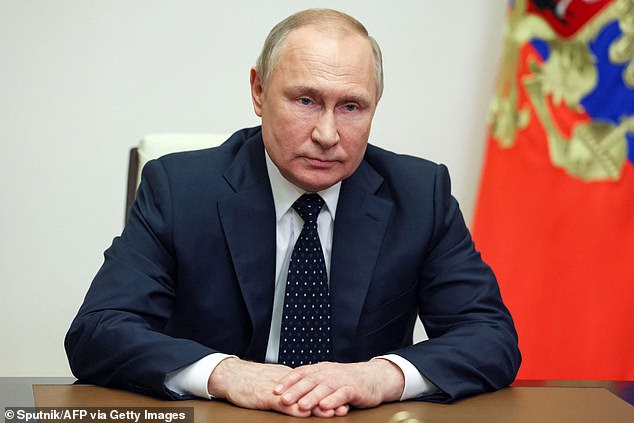 Murderous Russian troops have launched ‘hunt to kill’ missions to purge top Ukrainian officials in the east of the country. This comes after the Kremlin yesterday hailed fresh advances on Ukraine. Vladimir Putin pictured on May 28 in Moscow

With Russia now focused on encircling Severodonetsk, the region’s most important city where street fighting was yesterday reported, Luhansk’s governor Serhiy Haidai admitted Ukrainian troops may have to withdraw to prevent a repeat of the brutal siege in Mariupol. ‘It is possible that in order not to be surrounded, they will have to leave,’ he said.

Mr Grigorov described the bodies of civilians, including children, being abandoned in the streets, but insisted those who had chosen to face the Russians were resolute.

‘People’s nerves are like steel,’ he said. ‘Morale is high and there is no panic. But the bodies are just lying there, in the street. There are casualties among children. Russians are indiscriminate, they are shooting at residential areas, at the local population.’

The latest developments in eastern Ukraine came as:

l Putin told French President Emmanuel Macron and German Chancellor Olaf Scholz in an 80-minute phone call that he was ready to lift the blockade of ports preventing the export of Ukrainian grain, but that it would ‘require the removal of the relevant sanctions’;

l Kyiv was warned that the Russian advance in the east could embolden the Russian President to launch another assault on the Ukrainian capital in the autumn. Meanwhile, in a bid to replenish his military, Putin signed a law allowing people over 40 to enlist;

l Videos appeared to show Ukrainians seized in Luhansk and Donetsk being subjected to ‘denazification’ re-education programmes and forced to record ‘confessions’ on tape;

l The first Russian ship reportedly docked in Mariupol, a symbolic propaganda boost to the Kremlin after the fall of the southern Ukrainian city earlier this month;

l Speaking at the National Rifle Association conference in Houston, Texas, former US President Donald Trump said funds pledged to Ukraine by America should be diverted to improving security at US schools. America has so far pledged £43 billion to Ukraine.

The scale of Russia’s invasion was last night laid bare by Ukraine’s Prime Minister Denys Shmyhal who said Putin’s forces had destroyed more than 15,000 miles of roads, hundreds of bridges and 12 airports. That is in addition to 115,000 square miles of land that is mined or contaminated with bombs, at least 100 schools, colleges and universities and 500 medical facilities that have been ruined or damaged, he told the BBC.

The fall of Lyman is a blow to Ukraine. While small, it provides access to important rail and road bridges over the Siverskyi Donets River and is only 12 miles from Slovyansk, a major transport and supply hub.