Sainsbury’s has apologised again after shoppers were left furious at an advert showing a cream tea done ‘the Devon way’ in a Cornish store.

Anna Mace spotted the image, showing a scone with the cream on first and then the jam on top, while paying for her coffee at the supermarket’s cafe in Penzance.

The Devon tradition is to slather the scone with cream first before topping with jam, while the Cornish – who also lay claim to inventing the cream teas – prepare their scones the opposite way, with jam first before adding the cream.

The supermarket chain has since said sorry and confirmed the display has been removed, declaring: ‘This imposter has now scone!’

It follows an incident in April this year when regulars at a Sainsbury’s in Truro threatening to boycott their local store after coming across a similarly offending cream tea photograph. 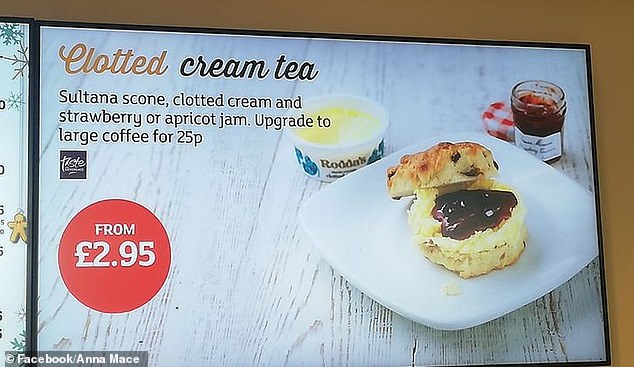 Anna Mace spotted the image (above), showing a scone with the cream on first and then the jam on top, while paying for her coffee at a cafe in Penzance 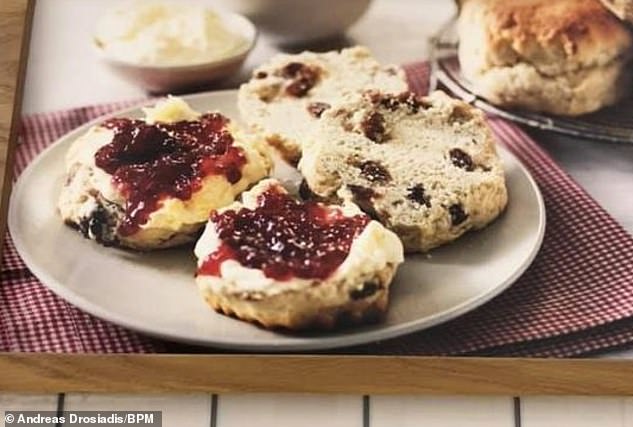 Earlier this year, Sainsbury’s customers in Truro threatened to take their money elsewhere after seeing another advert (above) of an ‘imposter’ cream tea

So where SHOULD the cream go?

The Devonshire method is to split the scone in two, cover each half with clotted cream, and then add strawberry jam on top.

With the Cornish method, the warm scone is first split in two, then spread with strawberry jam, and finally topped with a spoonful of clotted cream.

It is also traditional that the scone used should not have any fruit inside.

The debate on cream on top vs jam on top has been hotly debated for decades.

Ms Mace told CornwallLive: ‘I was in total disbelief. The screen flashes up several different photos on a loop, so I waited for it to come back around to this photo.

‘The lady was about to take payment and I said, ‘can you hang on a minute? I can’t believe there is this scone without jam first.’

‘The lady herself laughed and said, ‘yes we’ve all noticed that.’ It’s hardly designed to be customer focused is it. I admit I’m terrible for seeing things like this but am a proud Cornish maid.’

In response to a photo posted by Ms Mace on social media, one person said: ‘WTF Sainsbury’s!!! This is insulting to the locals.’

Earlier this year, customers threatened to take their money elsewhere after seeing another advert of an ‘imposter’ cream tea.

Spotting the furore on Twitter at the time, the local news site tweeted: ‘Sainsbury’s what’s this? A fruit scone!

‘With the cream on first! Advertised in a Cornish store. The cheek of it! Do you think this is acceptable?’

The supermarket replied: ‘An imposter! Which store did you see this please? We’ll have a word with them about this blasphemy!’

After learning of the store location, Sainsbury’s subsequently tweeted: ‘That’ll never do at all Truro! 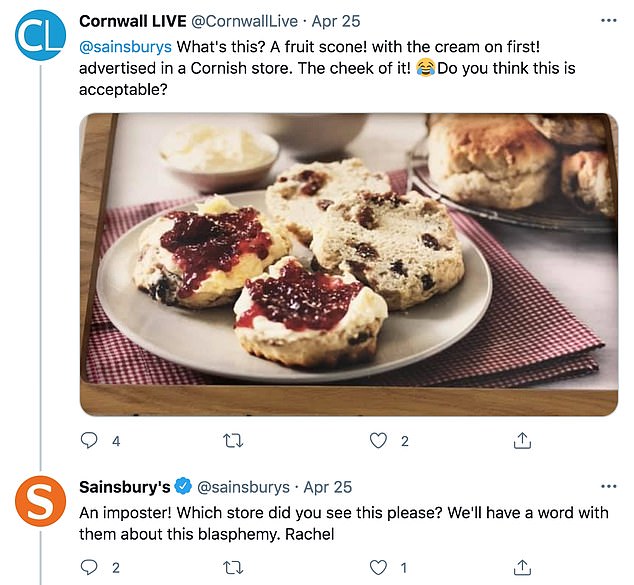 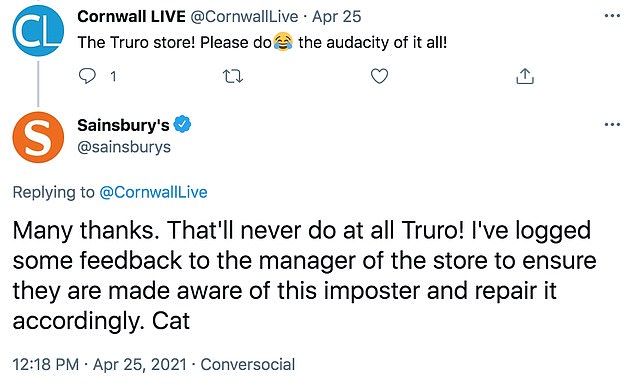 Spotting the furore on Twitter at the time, the local news site tweeted: ‘Sainsbury’s what’s this? A fruit scone! ‘With the cream on first! advertised in a Cornish store. The cheek of it!’

‘I’ve logged some feedback to the manager of the store to ensure they are made aware of this imposter and repair it accordingly.’

A similar row erupted in 2018 after a National Trust property in Cornwall published a poster advertising a cream tea event – again, showing a scone with the cream on first.

The advert was branded ‘unacceptable’, ‘shocking’ and ‘disgusting’ by locals after it was posted on social media by Lanhydrock House and Garden.

Lanhydrock later said: ‘We’d like to reassure our Cornish community that our catering team would never make such a heinous mistake and that our jam and cream are usually served in little pots so the order of their application is not subject to such appalling error.

Disney fan, 24, 'needed surgery after princess-themed glass from B&M exploded in her face as she drank'Lauren Perks, 24, was washing down a tablet with water when glass exploded  She said the shattered Disney-themed ...