Samsung reveals TV remote that gets its power from radio waves 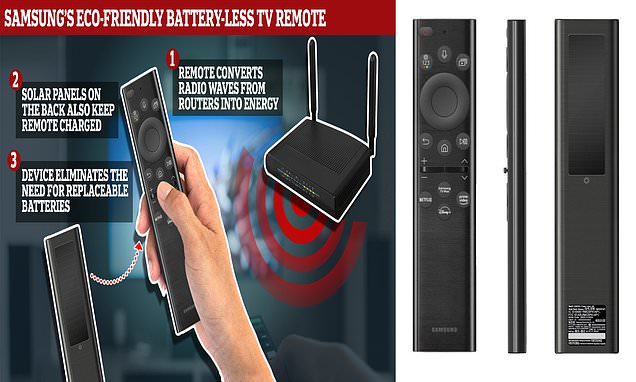 Forget about batteries! Samsung unveils new TV remote that is powered through solar energy and radio waves from WiFi routers

Samsung may have the answer to bashing your TV remote against the coffee table to get the last remaining drop of power from the batteries.

Ahead of CES 2022 in Las Vegas, the tech giant has unveiled a new TV remote, called Eco Remote, that harvests radio waves from nearby home routers as its energy source.

It’s also equipped with solar panels on the back which can be charged by indoor and outdoor lighting, as well as USB-C as an additional charging option.

Samsung said its new Eco Remote will be included with all of its 2022 TVs, available in either black or white. 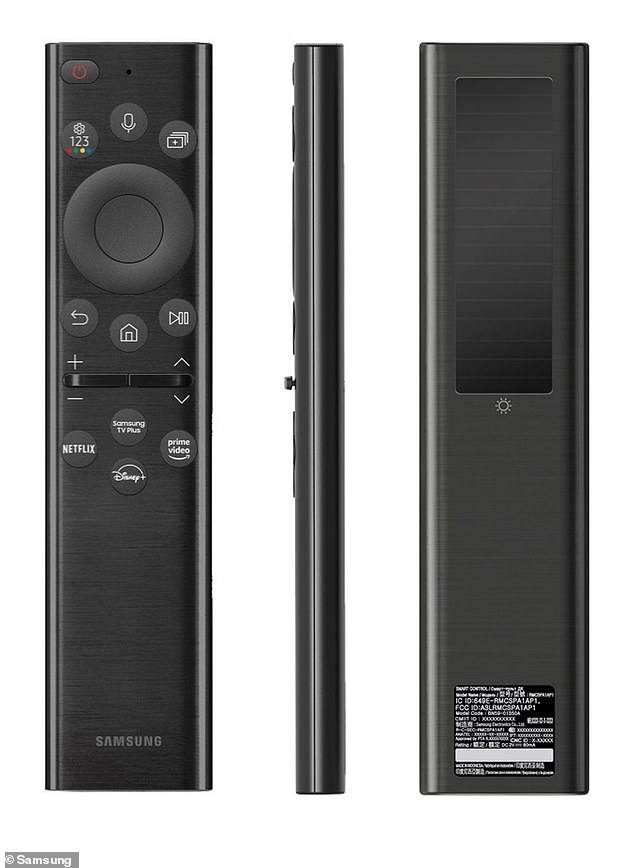 Samsung’s Eco Remote harvests radio waves from nearby home routers as its energy source. Right shows solar panels on the back of the remote 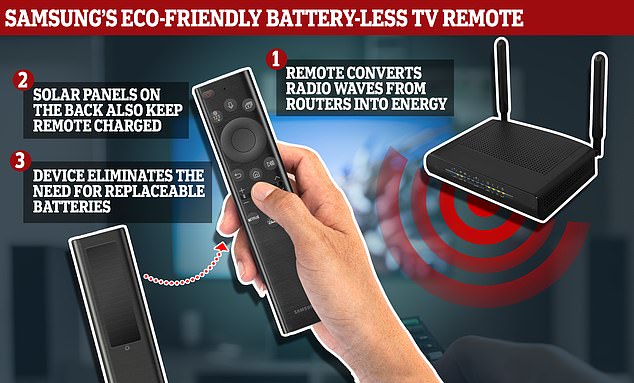 Samsung said its new Eco Remote, which is free from batteries, will be included with all of its TVs released in 2022

2. Solar panels on the back also keep the remote charged

3. The device eliminates the need for replaceable batteries

The Korean company is on a quest to become more environmentally-friendly, starting with eliminating batteries entirely from remotes for its smart TVs.

Eco Remote will help prevent waste from about 99 million batteries over seven years, the firm said.

At CES last year, Samsung revealed a solar powered version of the Eco Remote, but this new version for 2022 has the ability to harvest radio waves too.

This gives users an additional charging option if there’s little light for solar charging, according to the firm.

‘Whether it’s a bright and sunny day or the middle of the night, the battery stays fully charged by collecting routers’ radio waves and converting them to energy,’ Samsung said.

The new remote contains a ‘receiving antenna’ that harvesting radio waves from routers that are up to 40 metres (130 feet) away. The Eco Remote is made from recycled materials and has shortcuts for Netflix, Disney+, Amazon Prime Video and Samsung TV Plus

When depleted batteries are discarded, they end up in landfills where they decay and leak.

As batteries corrode, their chemicals soak into soil and contaminate groundwater and surface water.

Plants and animals are then poisoned by these battery chemicals.

RF harvesting is only really feasible for low-power devices, such as TV remotes, which is why it’s not seen in high-intensity devices like smartphones.

Eco Remote could potentially be compatible with any router that emits electromagnetic waves, such as a wired or wireless internet router.

It could essentially be powered by the multiple radio waves that flow through today’s homes and offices to power modern smart technologies, including 4G and 5G, GPS and Bluetooth.

Samsung’s new Eco Remote is also made with recycled materials, such as plastic bottles, ‘making it even more eco-friendly’, according to the company.

Promo images show it also has shortcuts for streaming services Netflix, Disney + and Amazon Prime Video, as well as Samsung TV Plus, the company’s own ad-supported streaming platform.

Samsung is expected to show off the device at CES 2022, the annual consumer electronics show that takes place annually in Las Vegas, as well as other new products. 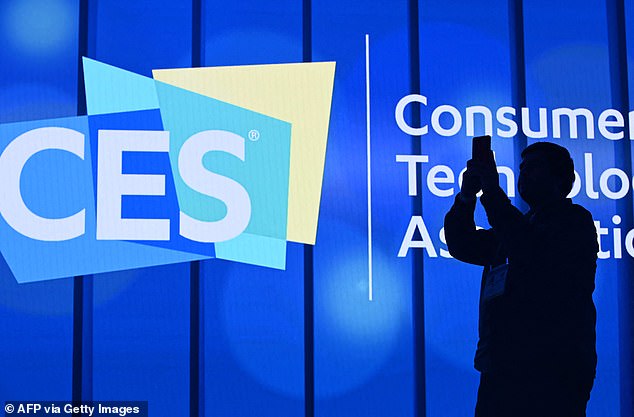 The Consumer Electronics Show (CES) is closing a day early due coronavirus cases spiking across the US, cutting the typical four days to just three

CES 2022 kicks off on Wednesday, January 5, and will host a range of representatives from global tech companies.

CES will be hosted in-person after going virtual last year due to coronavirus, although a number of big name companies won’t be making in-person appearances due to the Omicron variant.

Several big name companies have pulled out of the in-person event, including Amazon, Google, Microsoft, Meta and TikTok, which means it may not be the great comeback CES had hoped for.

CES 2022 WILL END ONE DAY EARLY DUE TO COVID SPIKE

The Consumer Electronics Show (CES) is closing a day early due coronavirus cases spiking across the US, cutting the typical four days to just three.

CES will be hosted in-person after going virtual last year, but organiser the Consumer Technology Associate (CTA) said the shorter schedule is ‘an additional safety measure’ amid the lingering pandemic.

CTA says the show ‘will and must go on’ and is ready to welcome more than 50,000 people and 2,200 exhibitors to its Las Vegas venue starting January 5.

Several big name companies have pulled out of the in-person event, including Amazon, Google, Microsoft, TikTok and Meta (formerly known as Facebook).

As of Monday, there more than 55 million cases of the coronavirus in the US and some 824,000 deaths caused by the virus.

The CTA’s president and CEO, Gary Shapiro, said cancelling CES would impact the smaller companies that are banking on this event to promote themselves and their products to the world.

Shapiro also said he understands there will be ‘big gaps on the show floor,’ which ‘will be different from previous years’. 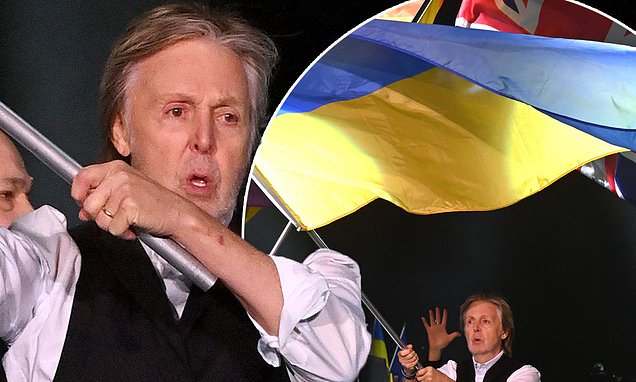 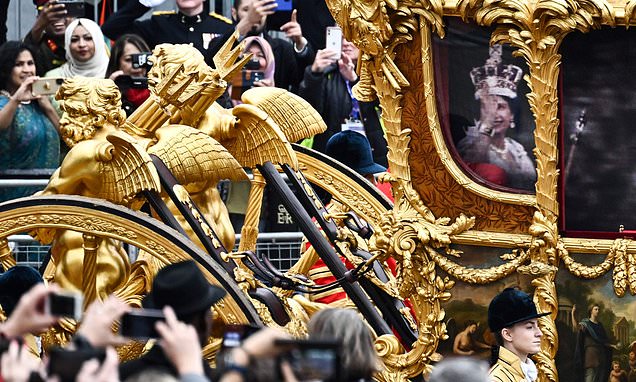 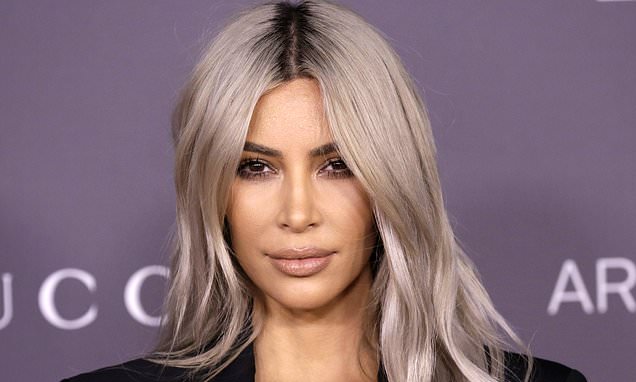 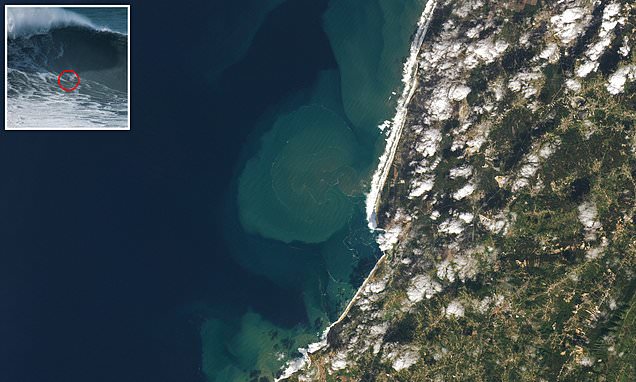