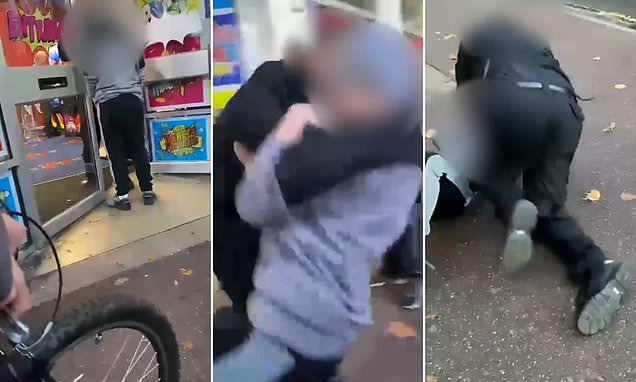 Footage of youths clashing with a security guard at the entrance to an arcade in Torquay shows two of the three getting thrown to the floor.

One of the three 14-year-old boys is seen in the video arguing with the security guard before slapping his face at the door of Golden Palms Amusement Arcade at 5.30pm on Tuesday October 26.

The footage shows the boy slapping the security guard around the face, to which the man reacts by grabbing the boy’s arms and shoving him to the floor. 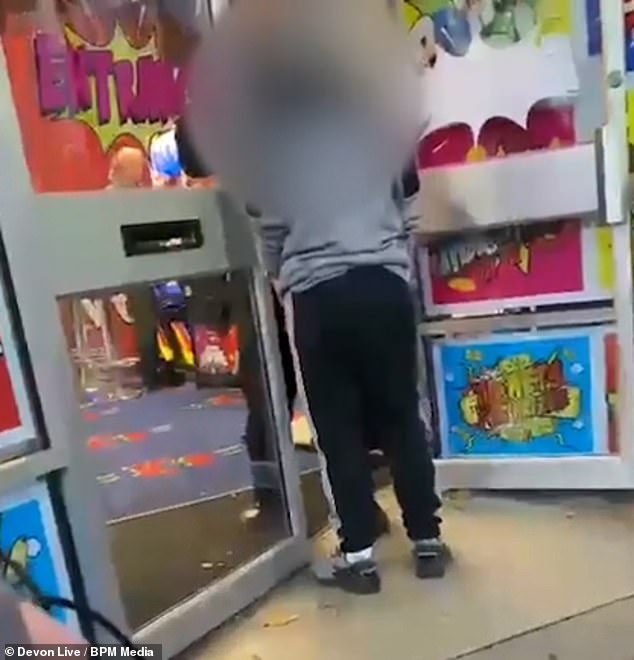 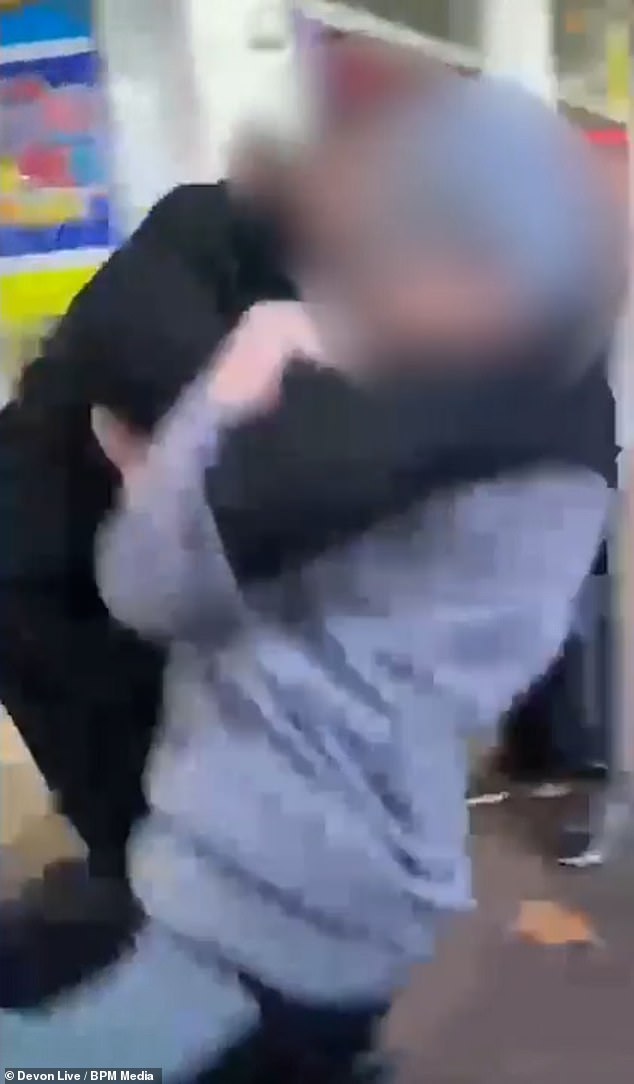 The situation quickly escalates after the boy slaps the security guard around the face, to which he responds by grabbing the boys arms and shoving him towards the floor

The security guard then proceeds to put his knee on the boy’s chest, holding him down for a second.

Two other boys can be seen trying to push the man off their friend, before he retaliates by grabbing one and holding his arm around his neck.

One of the friends out of the shot shouts, ‘Don’t choke him!’

As the security guard pulls the boy by the neck, he can be heard saying: ‘You like it, do you?’, to which the boy responds, ‘Get off me, get off me.’

A parent has lodged a police complaint and claims the incident involved the guard and three Torquay boys at 5.30pm on Tuesday October 26, 2021.

The parent has also complained to the Securities Industry Association which registers door staff and the owners of the arcade in Cary Parade.

He claims his son, seen wearing red trainers in the phone camera footage, was going to the defence of his friend.

The same parent has taken photographs of marks left on his autistic son’s neck and wrist. 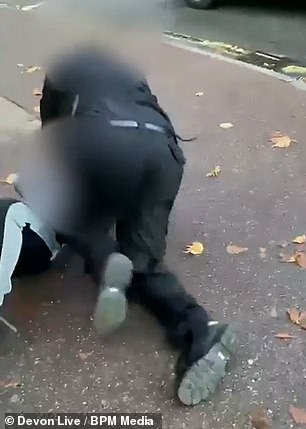 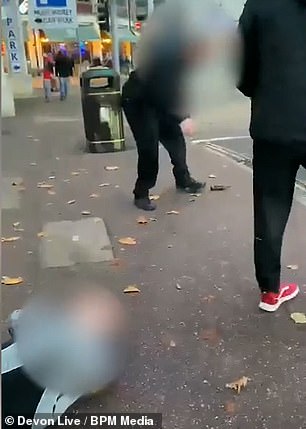 The parent of one of the boys in the video, with the red trainers, claims he pushed the security guard in defence of his friend and has taken photographs of marks left on his autistic son’s neck and wrist

The father of one of the boys admits that the first boy appeared to have slapped the guard: ‘I believe he did yes.

‘But that security guard should never have thrown a 14 year old to the floor and then proceed to put his hands around the boys throat.

‘All my son done was push this security guard off his friend.

‘At the end the security guard films them all on his personal mobile phone and threatens all the kids saying he will find them when he finishes work.’

Golden Palms has been contacted by MailOnline and an employee said they are not allowed to make a comment on the incident or whether or not the security guard was still employed by them. 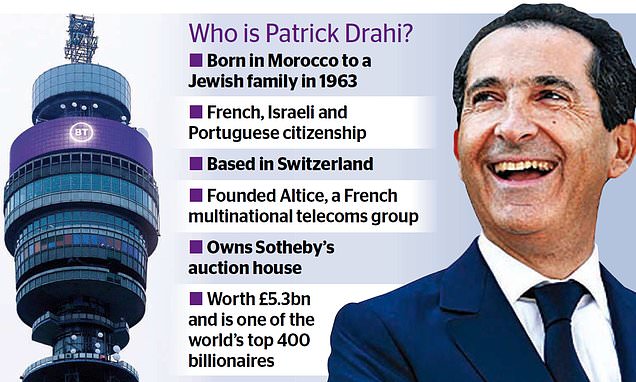 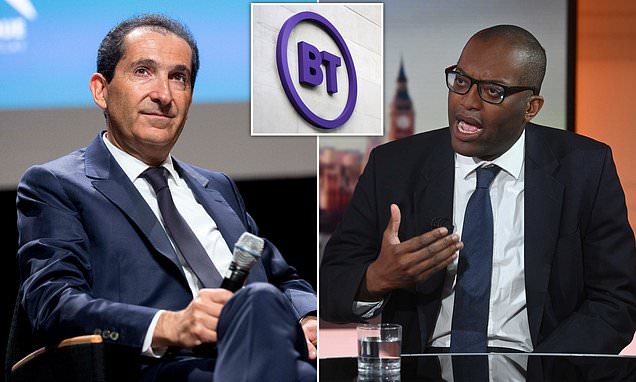 Government launches probe into French billionaire's stake in BT due to national security concerns: Sotheby's owner Patrick Drahi increased holding from 12% to 18% last year which raised fears of takeoverMinisters hav... 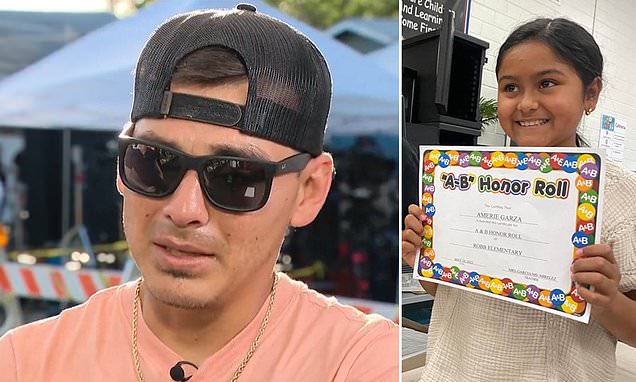 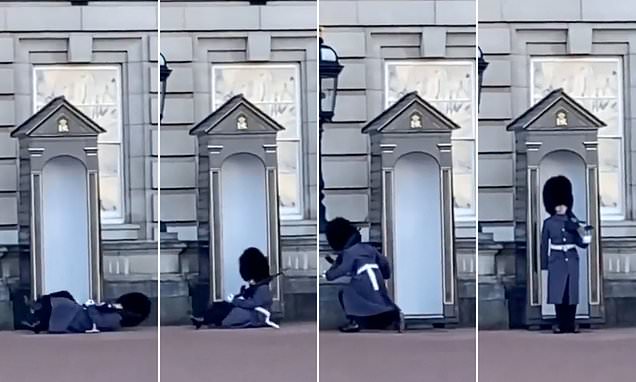