'势利’ journalist calls for caravans to have a curfew 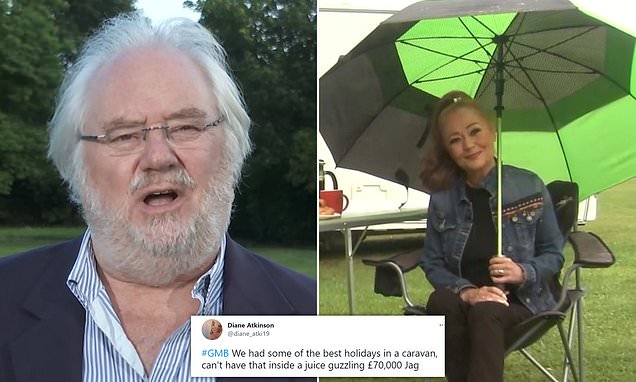 '势利’ journalist is branded ‘obnoxious’ by GMB viewers for claiming caravans should be BANNED from the roads after 10pm because he doesn’t like travelling behind them in his £70,000 Jaguar

A journalist has been branded an ‘obnoxious snob’ for suggesting caravans should face a curfew because he doesn’t like getting stuck behind them in his £70,000 Jaguar.

In a passionate rant, he said he ‘considered anything below a three star hotel camping’ adding that caravans are an ‘eyesore’ that ‘went out of fashion in 1952’.

He also described a caravan holiday he took as a child as the ‘most miserable existence in his life’ adding that people who holiday in caravans ‘don’t even wear proper clothes’ and that a caravan wouldn’t even be welcomed in jail.

His comments saw Alex Beresford brand him a ‘snob’ while many viewers complained of his ‘obnoxious’ views while others said he was ‘rude’ for ‘interrupting and finger pointing’ and that he ‘needed to learn some manners’.


‘They are an eyesore, and I don’t think they look good under any circumstances, no matter how modern, but caravans went out of fashion in about 1952.

‘When we all got out of World War II and my parents had no money to take us anywhere on holiday, they took us to a caravan in Anglesey. I’ve never had a more miserable existence in my life.

‘I don’t understand how a human being can exist in a little tin can, because that’s about what it is, it’s like hamsters in a sandwich.

‘It’s like people, crushing themselves together in a situation that you wouldn’t even welcome if you’re in jail.

‘I just don’t understand the mentality of caravaners. They seemed to want to all crush together.

‘And by the way, have you ever been to a caravan site? What you see in the caravan site are all these knackered old four by four cars which drag these old caravans. 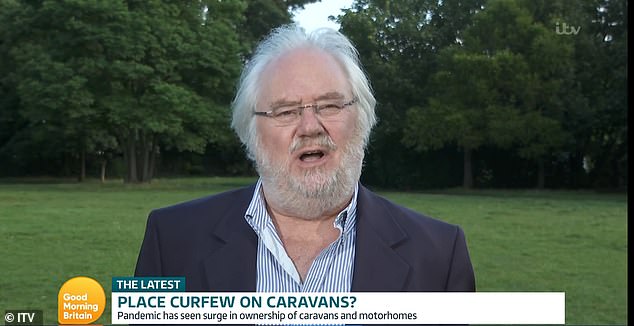 ‘And then people who are caravaners seemed to have this urge to want to try and convince everybody, they’re enjoying themselves, And they pretend all the time to enjoy myself.

‘They don’t even wear shorts. They don’t wear proper clothes’.

Defending caravan trips was 80s popstar Sonia Evans, who spoke from outside her holiday home in Cheshire.

‘Here I am at Delamere Forest, it’s wonderful. 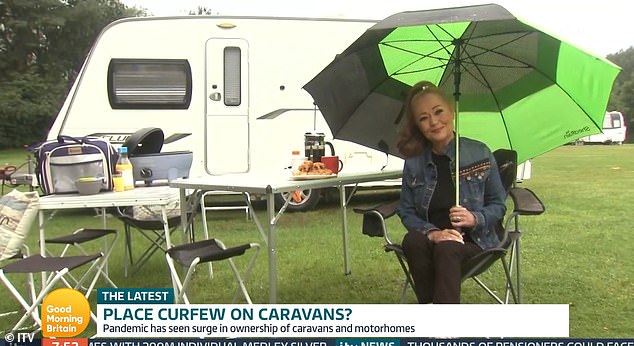 Defending caravans was 80s popstar Sonia Evans, who spoke from outside her mobile home in Cheshire

‘As with nature beautiful outside, and you know what all those things you’ve just said, it’s a bonding thing with your kids it’s memories.

‘Memories you remember ever. 而且你知道, 我们, we need this more than ever now because nobody can go abroad’

Interrupting her, Mike cut in: ‘What about getting the caravan to the beauty spot you’re going to? I believe in live and let live. 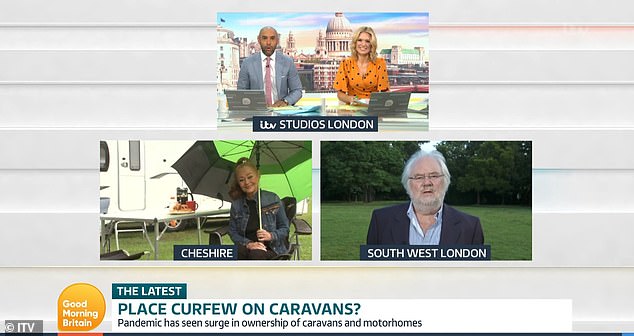 In a passionate rant, Mike said he ‘considered anything below a three star hotel camping’ adding that caravans are an ‘eyesore’ that ‘went out of fashion in 1952’.

After Alex told him he was ‘sounding like a bit of a snob’, 他接着说: ‘I’m not a snob, I’m not a slob. I regard three star hotels as campaign but I’m not a snob, I just like to be comfortable when I go somewhere on holiday.’

Alex added that there are going to be more caravans on the road this summer as we’re ‘all being advised to have staycations’.

‘In that case I want a curfew. Caravans should only be able to travel around from A to B, from 10pm at night till 6am in the morning, and not clog up the roads for decent motorists,’ 他加了.

回击, Sonia went on: ‘It’s a lovely family holiday. The kids love it. And people can afford it as well. It makes sense to do it, it’s a bonding thing. Inside the caravan, you can go and days out, and honestly it’s like a little adventure for kids, they absolutely love it and I love it.

‘I say now is more time than ever when we can’t really go abroad and people don’t feel safe going abroad, but they can go to these caravan sites and and have loads of fun.’

Cutting across her again, Mike added: ‘Let’s live in that live. Where do you park your caravan? I bet you put it on your driveway your house, 你不是吗? And block out all the light for your neighbours next door. Caravans are eyesores when they’re parked on driveways or the roads of people’s houses.

Sonia replied: '好, that’s their own property that can do they like. 一世 don’t actually own a caravan I just go to the static caravan so I don’t drive them, but if that’s their property they can do what they want.

‘There’s so many sites around the country that you can go and investigate because there’s so much beauty in our own country’.

‘We had some of the best holidays in a caravan, can’t have that inside a juice guzzling £70,000 Jag,’ wrote one on Twitter.

‘You can tell Mike Parry is bitter about being rejected from the caravan club,’ 开玩笑的.

‘That Mike Parry is a complete idiot and doesn’t deserve airtime. We used to own a static caravan and this year have returned to staycations in caravans it was so relaxing more so than hotels most new caravans cost more than his 70k jag! Hate shallow people like him #GMB’ 说了三分之一.

‘Wow how rude is that Mike Parry on @GMB pointing and shouting….. well done for calling him out @alexberesfordTV and I agree with @SoniaevansSonia caravan holidays are some of the best holidays you can have I’d rather have one of them than a £70K @mikeparry8 #GMB’ commented a fourth.

‘What a stuck up snob… caravan holidays are great fun, making lots of memories, Mike go back to your 70k Jag and your expensive hotels and leave the campers alone,’ 添加了另一个. 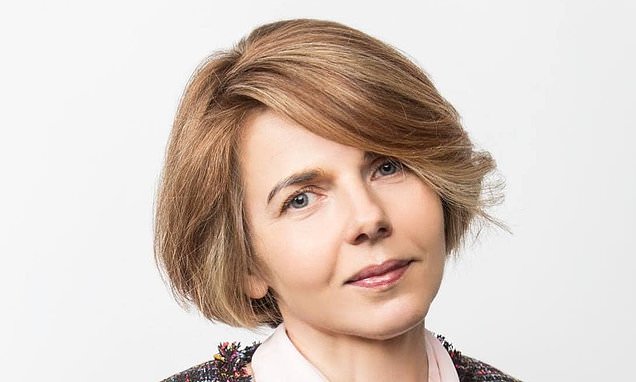 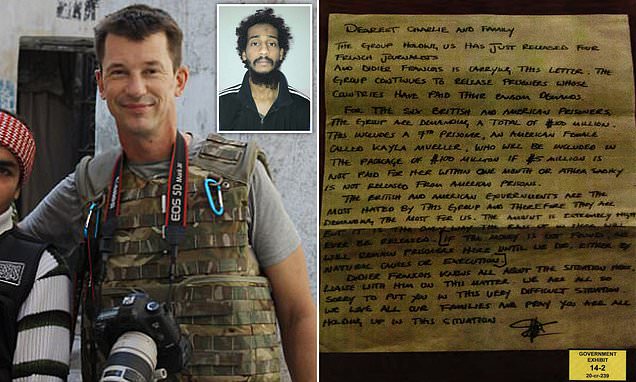 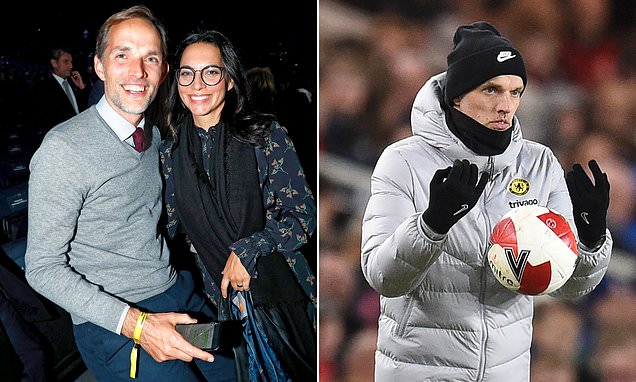