So much for hassle-free travel! Heathrow passengers slam queues 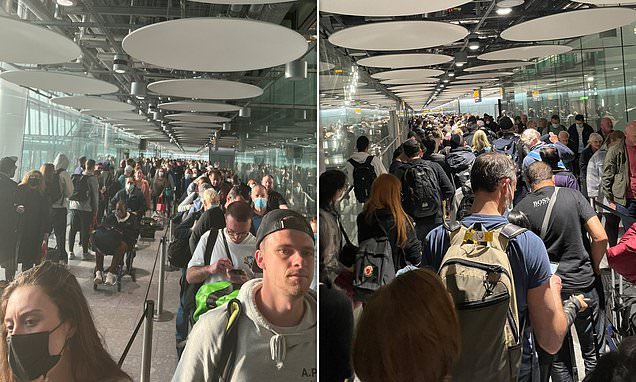 So much for hassle-free travel! Furious Heathrow passengers slam ‘worst-ever’ passport control queues with lines stretching ‘back for a MILE’ despite all Covid rules being axed – as airport blames increase in travellers

Have YOU been stuck in the queues?

Furious passengers have slammed Heathrow for yet more chaos entering and leaving the airport amid reports of mile-long lines.

Travellers posted extraordinary pictures of ‘thousands’ of people waiting at immigration as officials struggled to deal with the huge backlog.

Many miserable flyers said it was the ‘worst queue’ they had ‘ever seen at any airport’, with Terminal 5 singled out for horrendous waiting times.

Heathrow said it was aware of problems facing customers and blamed it on an ‘increase in passengers’ that Border Force officers were trying to process.

The latest meltdown at the airport comes after problems at baggage reclaim over the weekend saw some travellers forced to leave without their possessions.

British Airways had also cancelled at least 25 flights and delayed even more amid ‘operational issues’.

The continued chaos follows the government’s scrapping of remaining travel rules from March 18 – which was expected to pave the way for the return to hassle-free holidays. 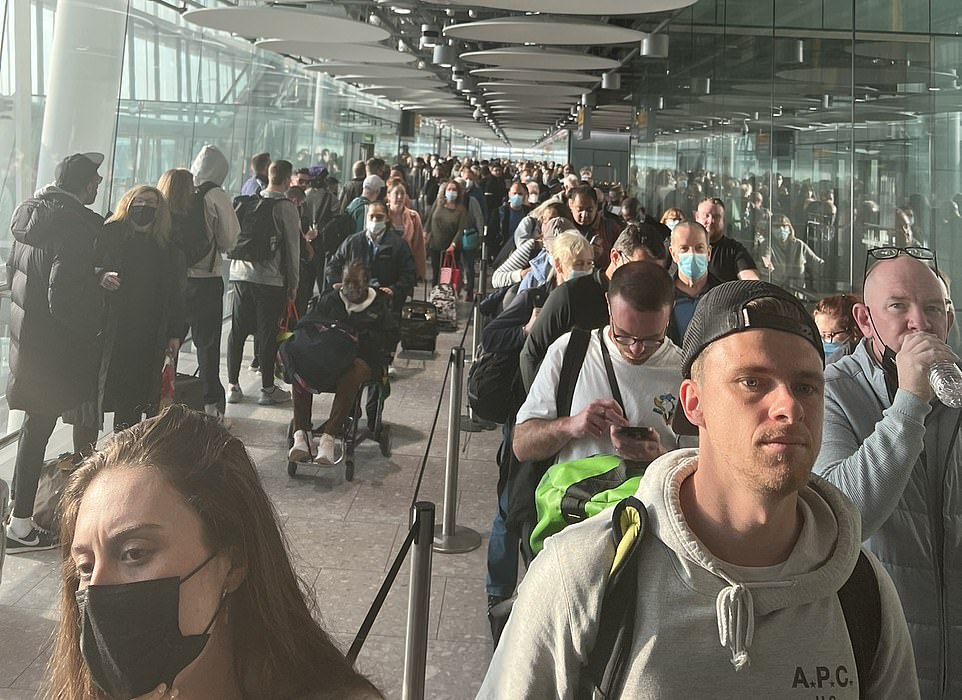 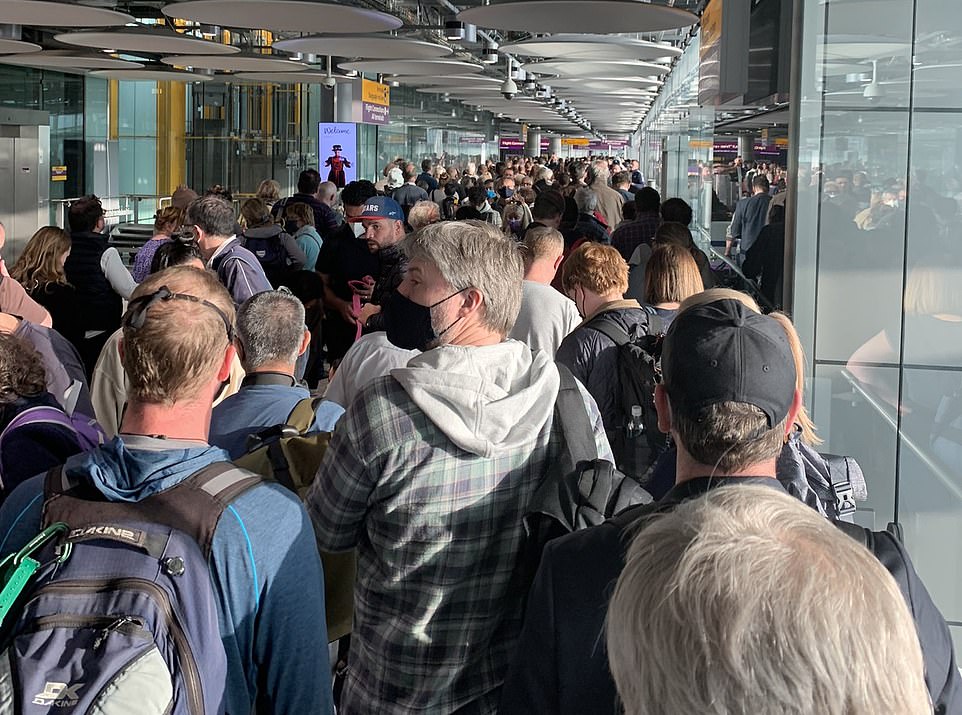 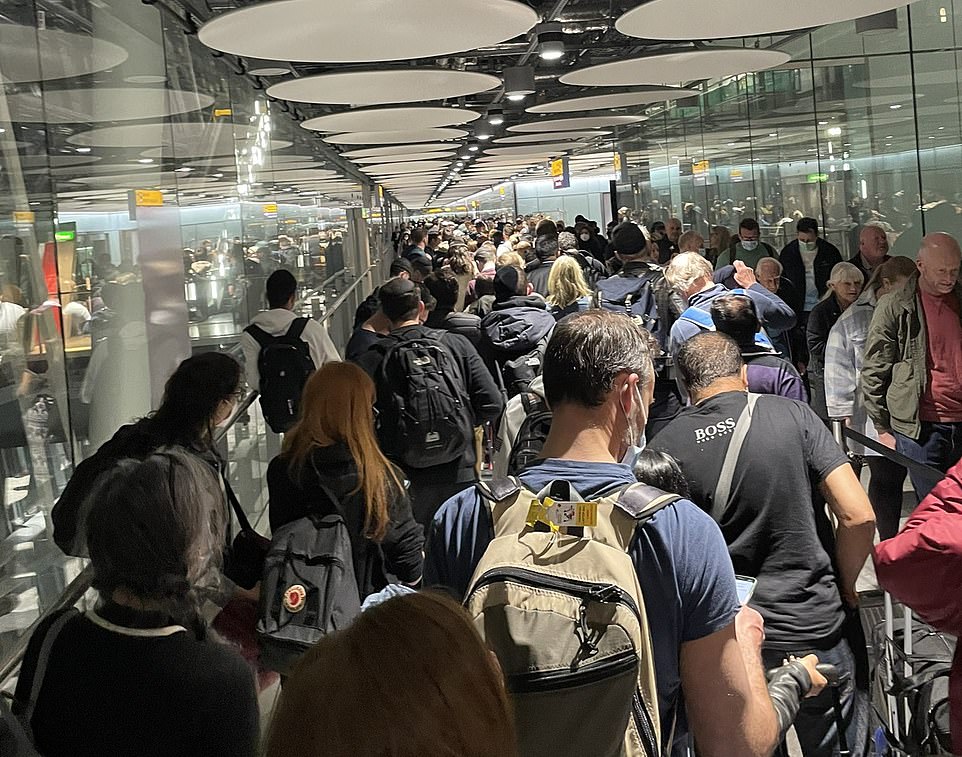 Many miserable flyers said it was the ‘worst queue’ they have ‘ever seen at any airport’, with Terminal 5 singled out for horrendous waiting times 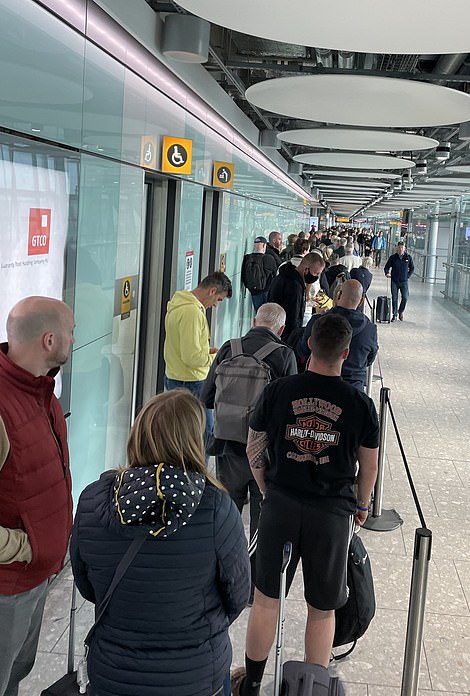 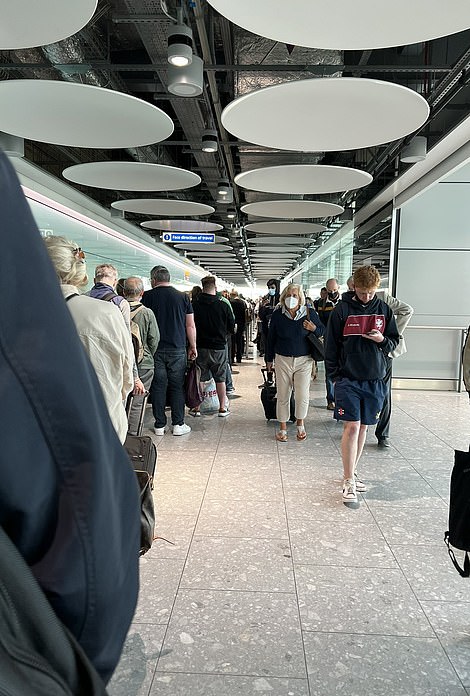 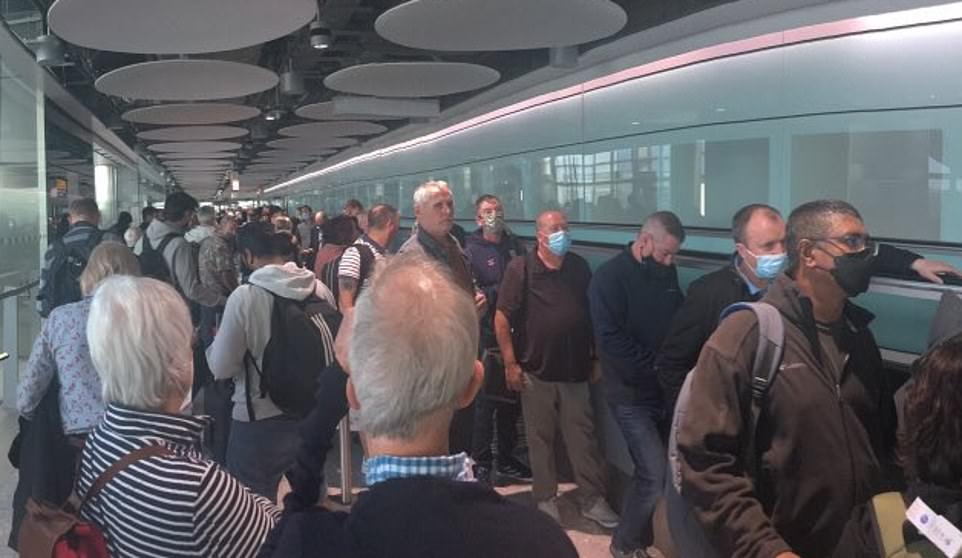 Among those livid this morning was the Tory Party’s Lord Benyon, who said he had been left queuing without any information from staff

Among those livid this morning was the Tory Party’s Lord Benyon, who said he had been left queuing without any information from staff.

Hy het getwiet: ‘In a queue about a quarter of a mile long at Heathrow. No one telling us about what the problem is. No staff on hand at all. Welcome to Britain.’

Others were also left furious with the sprawling lines and lack of Heathrow workers available to help process them this morning.

Angie Buckland said: ‘@HeathrowAirport your security lines are ridiculous. If we had to catch a connecting flight, there’s no way we’d make it. Landed at 6:45 and my friend isn’t even close to getting through at 8:40.’

Charlie Stebbings posted on Twitter: ‘Great to be here – belaglik. Would be nice if there were people here explaining that…’

Liz Croft wrote: ‘How are the queues at Immigration acceptable?? This is the queue about 1/4 mile from passport control along the walkways.’

Ben Morrin said: ‘Just returning from a super break in South Africa. Very lucky to have gone. 2nd time coming back through ⁦@HeathrowAirport⁩ in a month.

‘Queues for passport control >90 minutes again. Unfair on those here with young children and babies and not a sign of a welcoming.’

A woman said: ’20 years of travelling and this is the longest immigration queue I’ve ever seen. @HeathrowAirport what on earth is going on?? There must be 10,000 people in this line.’

Another put: ‘Worst queue I have ever seen at any airport at Terminal 5 – seems over 100m long just to get to the main immigration area where there will be more queuing. Wat gaan aan?’

And a man said overnight: ‘@HeathrowAirport a bit of feedback for your security staff. If you see a Dad solo parenting, please don’t be rude or patronising to him and assume that he is unable to travel without his partner.

‘Ook, maybe think about a system whereby you can security scan in this instance without making him feel as small as a bit sized KitKat for asking a question about the logistics of being put through the X-ray scan when you are carrying a baby in a sling.’ 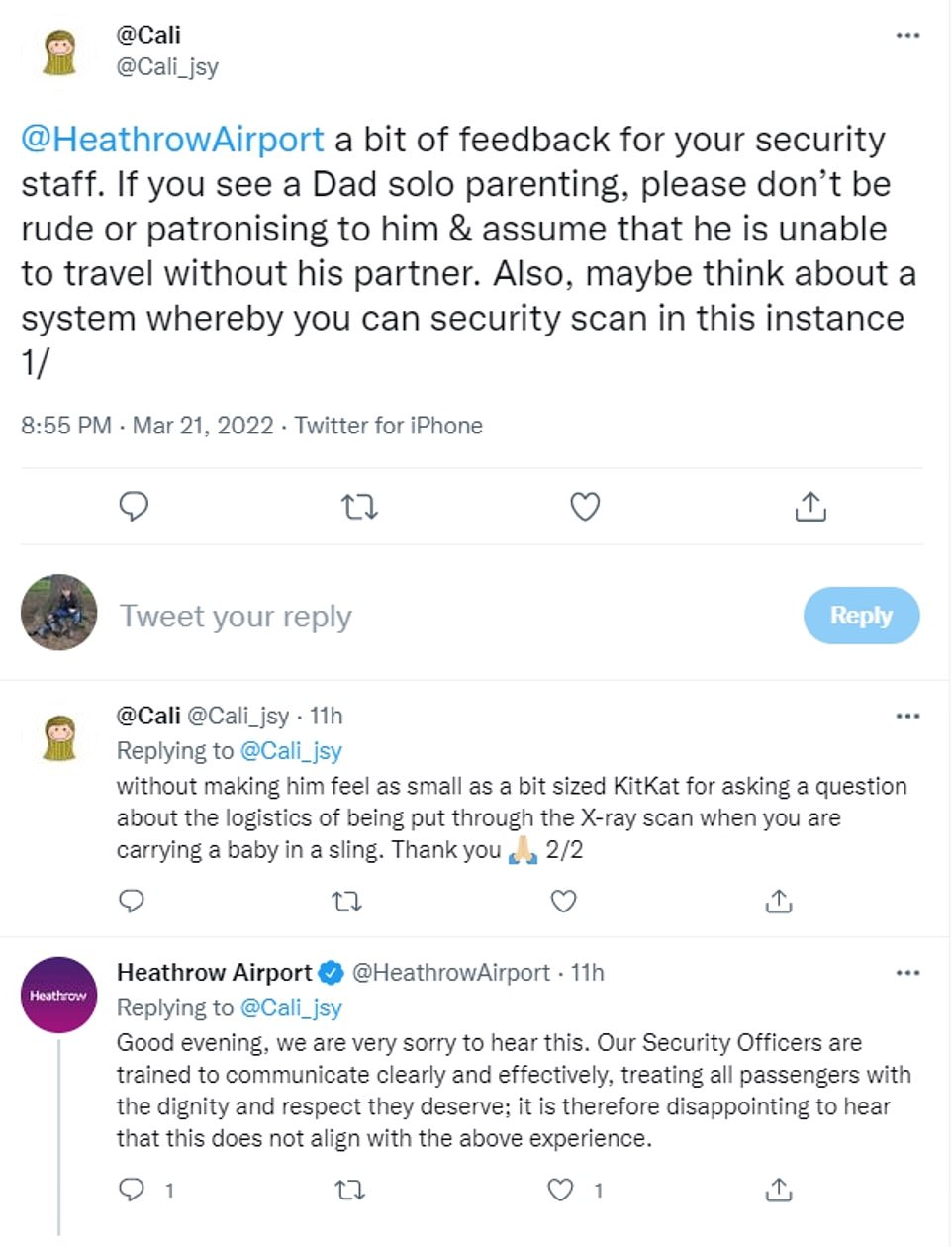 Heathrow replied to the majority of Twitter posts, met een gesegde: ‘We are aware of longer immigration queues, due to the increase of passengers. Border Force are working hard to process passengers. 'Ons het die probleem geïdentifiseer wat gebruikers raak’

A spokesman for Heathrow added: ‘We are currently experiencing some delays processing passengers through the UK border in T5.

‘Our teams are on-hand supporting passengers in the immigration halls and we are working with Border Force to resolve the situation as quickly as possible. We apologies for any inconvenience caused.’

Heathrow has been dogged by delays in processing passengers over the last few months, most recently with a meltdown at baggage reclaim over the weekend.

Customers claimed there were ‘not enough staff to explain what was going on’ and a lot of the desks looked ‘unmanned’ at baggage check-in at Terminal 5.

On Saturday British Airways cancelled more than 25 flights and delayed even more as ‘operational issues’ was blamed for the mayhem.

The ‘operational’ issues also saw customers report there were not enough staff to handle the crowds going to check in baggage. 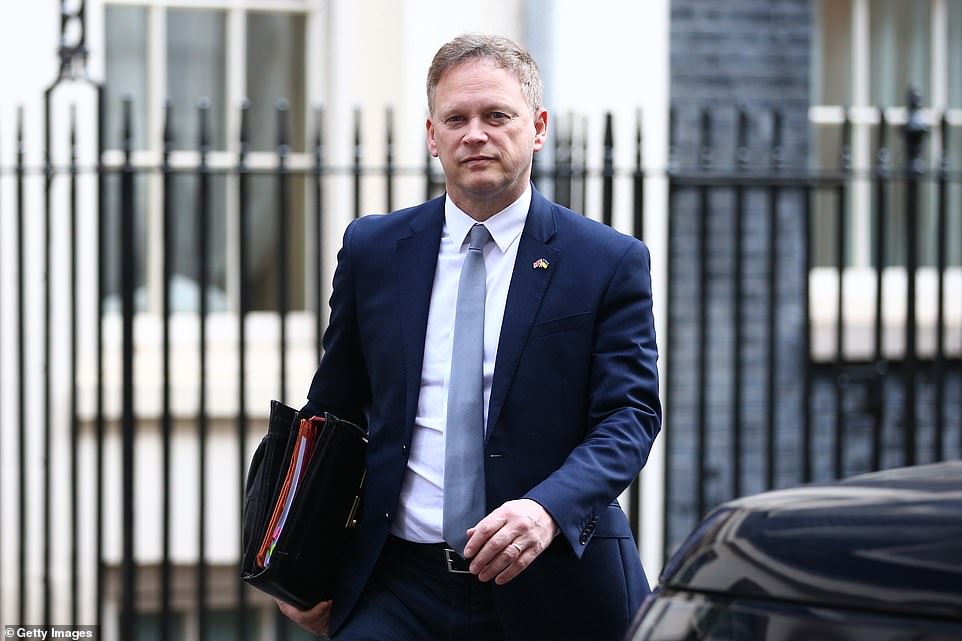 Sarah Hartley, travel editor at the Mail on Sunday, said staff were ‘caught on the backfoot, passengers like me have been waiting in the queue for an hour and a half to drop luggage’.

Sy het bygevoeg: ‘If there had been enough staff to explain what was going on or even all the desks manned then we wouldn’t feel as one fellow passenger said ‘shabbily treated.’

The airline said on Sunday: ‘We’ve apologised to customers whose bags were delayed yesterday. We know how frustrating this is and our teams are working incredibly hard to return luggage as soon as possible.’

The spokesman continued: ‘We’re really sorry that we have had to reduce the number of flights today due to operational constraints.

‘Our teams are working extremely hard to get our customers to their destinations as quickly as possible and we are in contact to offer alternative options including a full refund.’

The government scrapped all remaining coronavirus travel rules from March 18, paving the way for the return of hassle-free holidays.

It means passenger locator forms and Covid tests are no longer needed for both vaccinated and unvaccinated travellers – just in time for the Easter holidays. The mask mandate for everyone at Heathrow was also shelved.

The move brought to an end two years of ever-changing international travel restrictions amid the coronavirus pandemic. 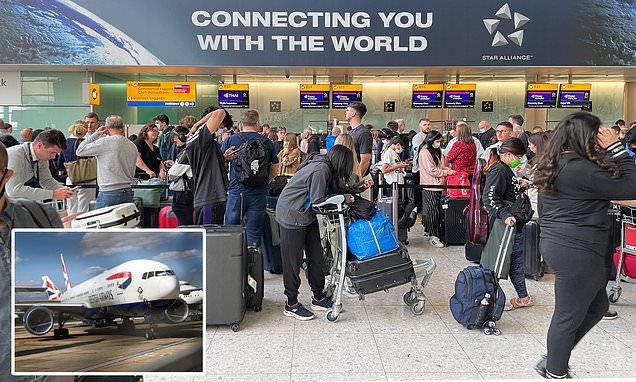 Tens of thousands of travellers face getaway chaos as MORE Heathrow flights are axed: British Airways will bear brunt of cancellations as airlines at UK's busiest airport announce next week which services will be cut... 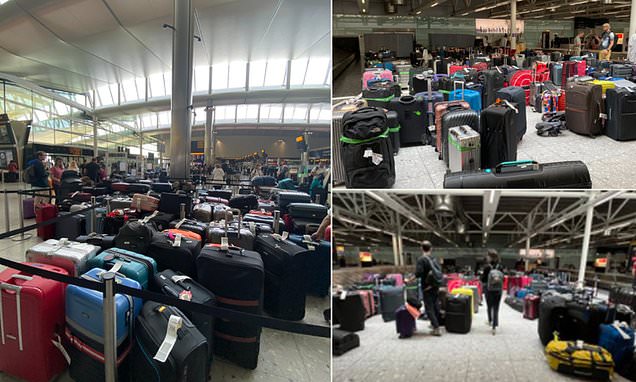 Heathrow terminal is swamped by sea of loose luggage at arrivals

Heathrow lets unclaimed bags sit for DAYS in terminal and forces arriving passengers to sift through a sea of luggage belonging to people who have long-since departed in new airport chaosUnclaimed luggage was seen ly...