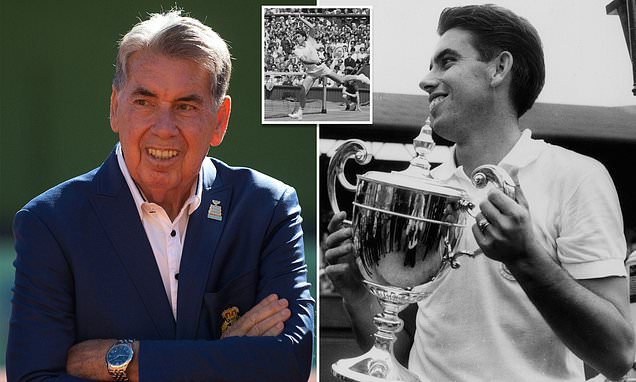 Spanish tennis star Rafa Nadal was among the friends and fans who paid tribute to the tennis legend after learning the news.

The father-of-five’s lawyer Marcos Garcia-Montes said he had passed away at his home in the Costa del Sol resort of Marbella this morning after suffering heart failure.

Initially sceptical of grass courts, he famously said ‘grass is for cows’. Yet in 1966 he became the first Spaniard to win Wimbledon in a triumph after defeating the USA’s world number six Dennis Ralston in straight sets.

He also had two French Opens and one US Open to his name.

At the 1968 Olympic Games in Mexico City, Santana won the gold medal in singles, but tennis was only a demonstration sport at that time. 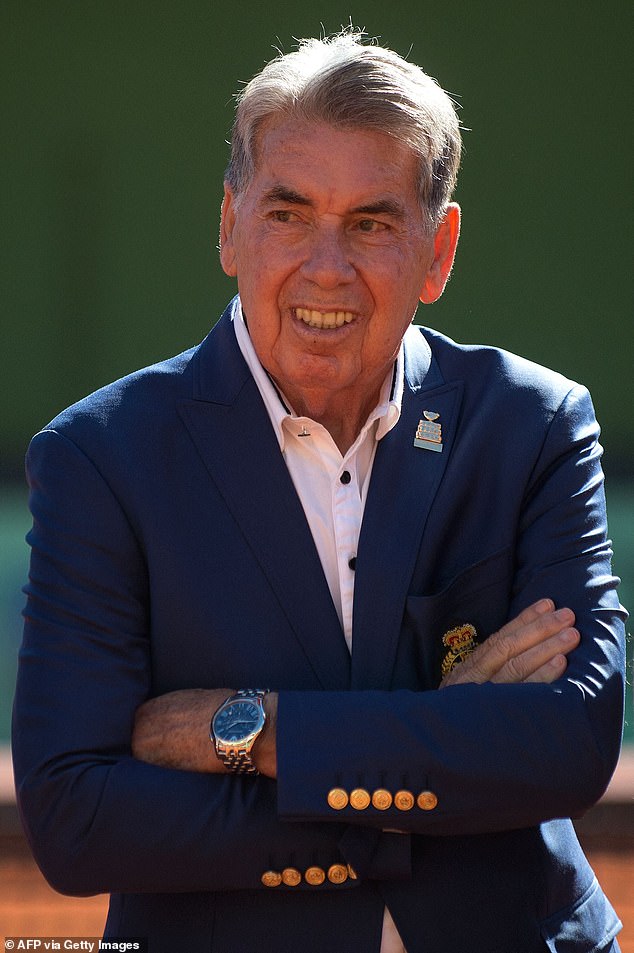 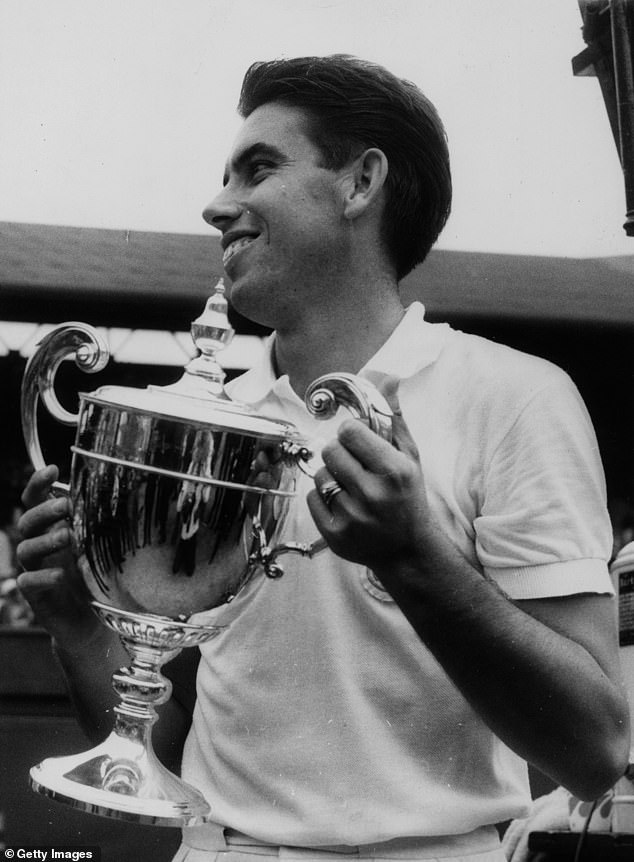 Rafa Nadal, who has won 20 Grand Slam men’s singles titles, reacted on Twitter by writing alongside a picture he posted of him with his friend: ‘I have just received the terrible news of the death of our great Manolo Santana.

‘As I have said many times in the past, a thousand thank yous for what you did for our country and for marking the way for so many.

‘You were always a benchmark, a friend and a person close to all of us.

‘We will miss you Manolo. You were always unique and special.

‘A hug to your family and a lot of strength at this time. We will never forget you.’ 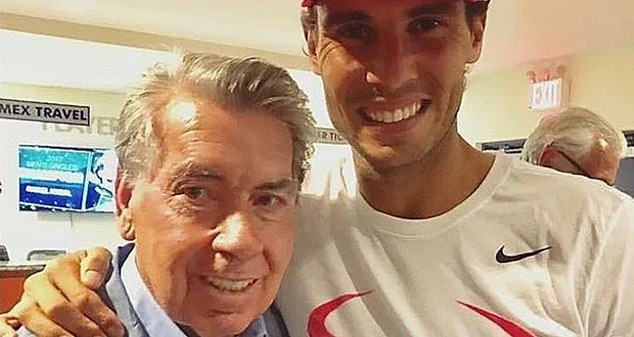 Another of Spain’s great tennis players paid tribute to Santana. Rafa Nadal posted this photo of the pair together on Twitter and said, ‘We will miss you Manolo. We will never forget you’ 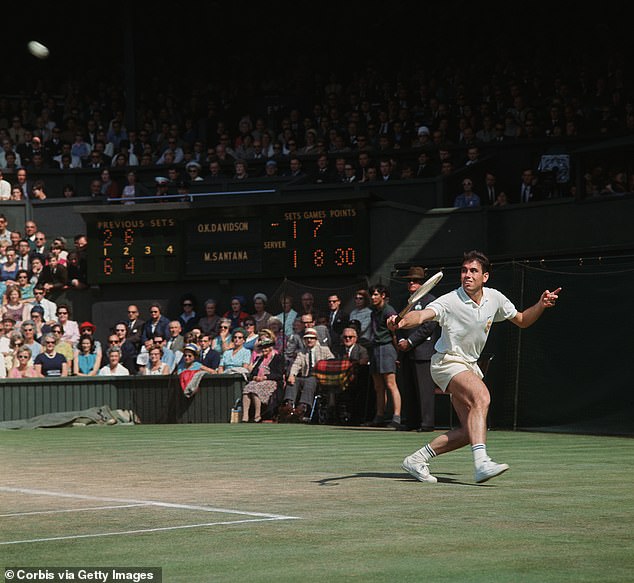 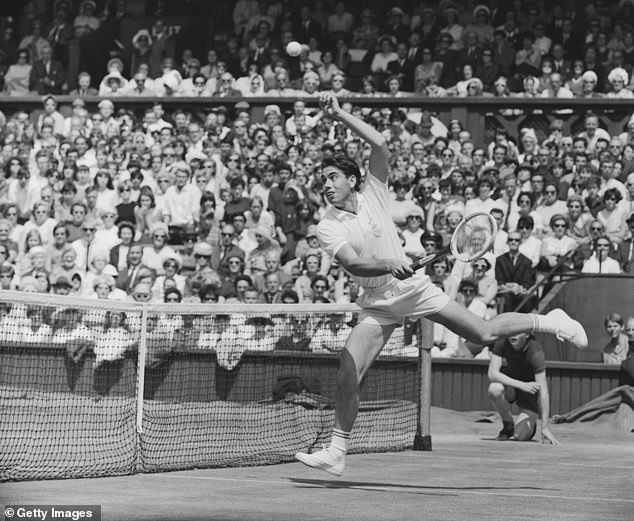 Santana during the 1966 Wimbledon championships on June 29, ahead of the final three days later 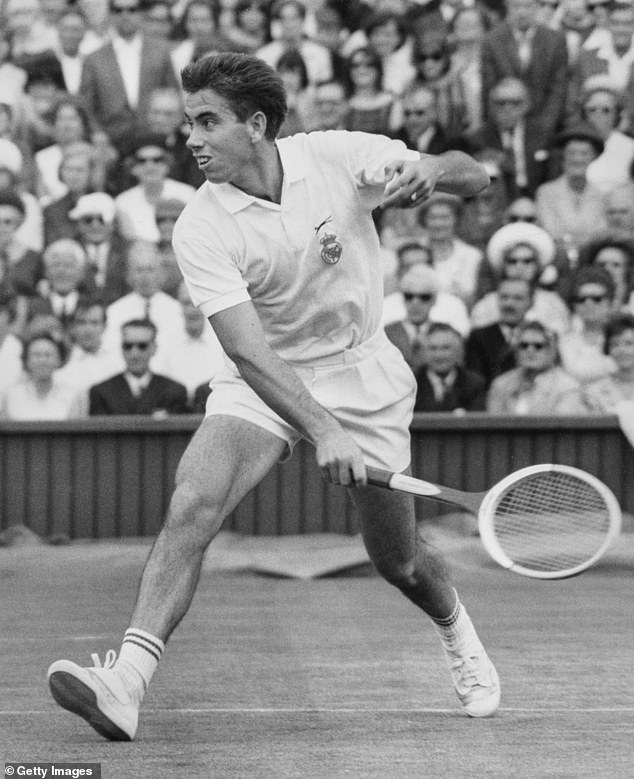 Santana plays a return to Ken Fletcher of Australia during their Men’s Singles Quarter Final match at the Wimbledon on June 28 1966. Santana wore a Real Madrid football shirt as a show of his love for the club

Santana, a pioneer of Spanish tennis, became a national hero after leading Spain to an unexpected victory over the US in the Davis Cup in 1965 following his 1961 과 1964 Grand Slam successes in France.

The Madrid-born sportsman, who had been diagnosed with Parkinson’s Disease, is said to have ‘picked up’ the game after starting out as a ball boy when tennis in Spain was still a relatively unknown elitist sport.

He skipped the 1966 French Open to concentrate on winning Wimbledon, saying in a subsequent interview years later: ‘Wimbledon was the biggest of the four.

‘I hope you will agree with me, this is the one all the players want to win. This is why I feel very sorry for the great players like Ken Rosewall, Ilie Nastase, and Ivan Lendl who never won Wimbledon. I am very happy I did it once.’ 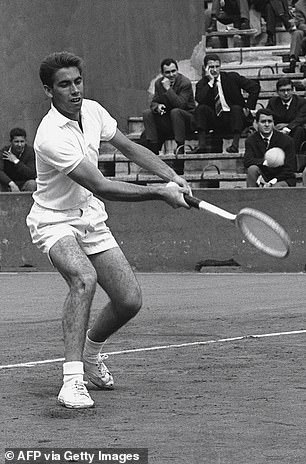 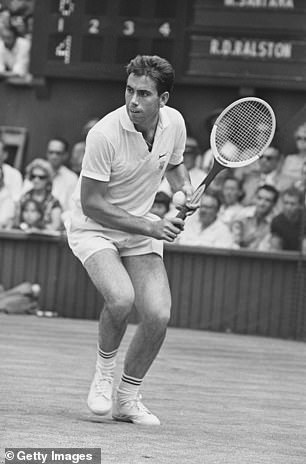 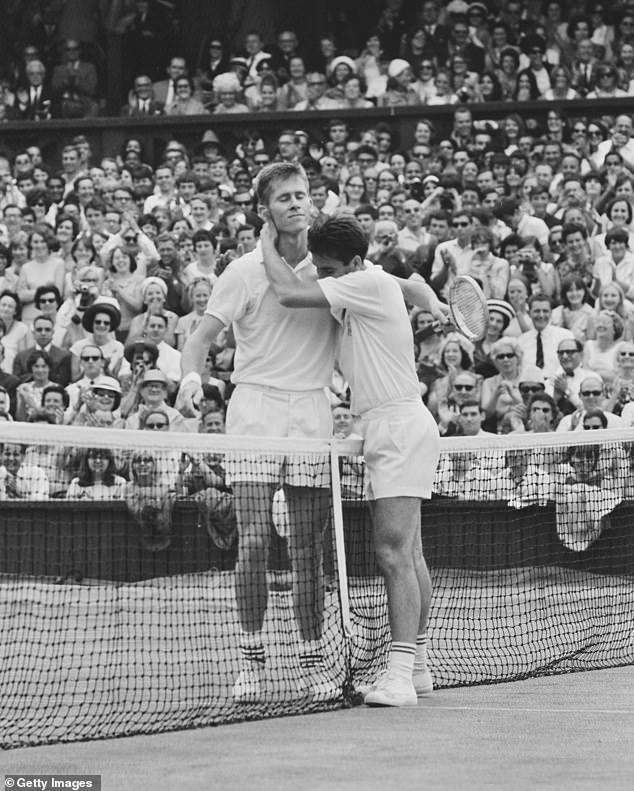 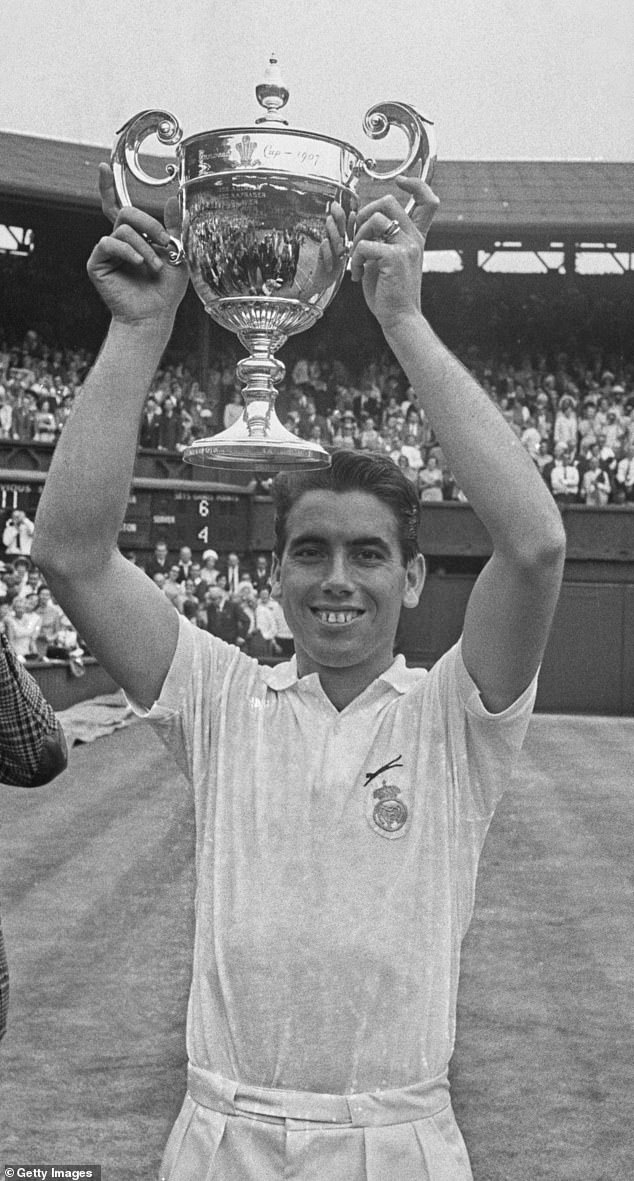 He skipped the 1966 French Open to concentrate on winning Wimbledon, saying in a subsequent interview years later: ‘Wimbledon was the biggest of the four. ‘I hope you will agree with me, this is the one all the players want to win’ 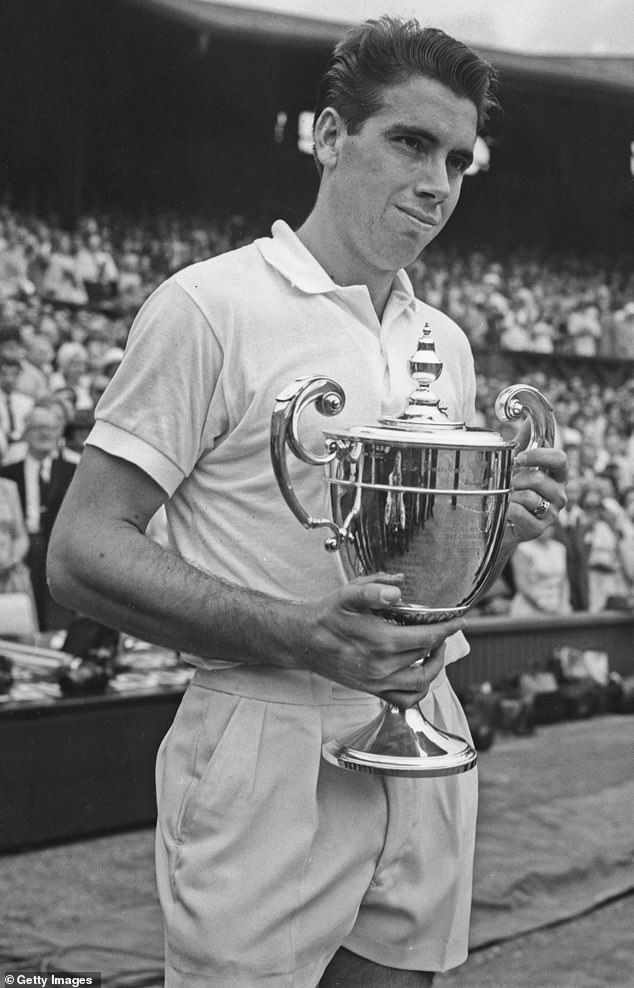 The Spanish tennis legend added: ‘I feel very sorry for the great players like Ken Rosewall, Ilie Nastase, and Ivan Lendl who never won Wimbledon. I am very happy I did it once’ 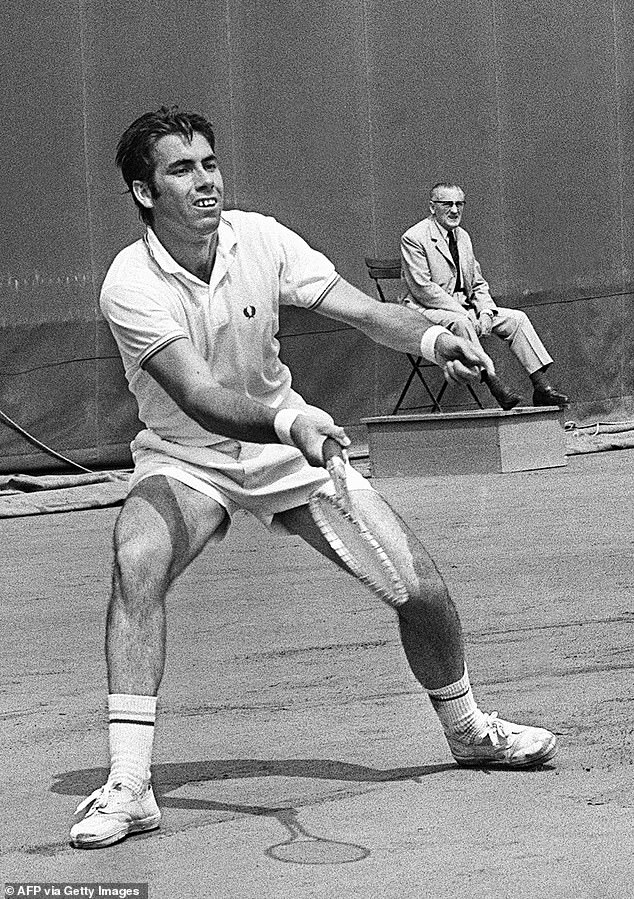 After retiring in 1980 he remained closely linked to the world of tennis as a trainer, tournament promoter and Senior Circuit player.

Four-times-married Manolo, who owned a tennis and paddle tennis club in Marbella, had three children with his first wife and another with his second. In-between he fathered a daughter with an air stewardess.

Spanish PM Pedro Sanchez tweeted: ‘He won Roland Garros, the US Open and Wimbledon, 72 tournaments in total and an Olympic gold that turned him into a tennis legend and one of the best sportsmen in our country.

‘My sincere condolences to Manolo Santana’s family, his loved ones and the world of tennis.’

The Spanish Olympic Committee added: ‘With heavy hearts we say goodbye today to Manolo Santana, a legend and a pioneer of tennis.

‘Sports owes you a lot Manolo. We will never forget you.’

La Liga leaders Real Madrid, the football club Santana supported, 성명에서 말했다: ‘Real Madrid FC, its President and its Board of Directors sincerely regret the death of Manolo Santana, one of the great legends of tennis and Spanish sport, winner of four Grand Slams, as well as many other trophies.

‘Real Madrid would like to express its condolences and its affection to all his family and loved ones.

‘Manolo Santana is one of the greatest all-time tennis players, as well as a passionate madridista and a staunch representative of our values throughout his career.

‘His love for the club inspired him to win Wimbledon in 1966 in the Real Madrid shirt, making him the first Spanish tennis player to win this Grand Slam.’

Wimbledon’s history and how the tennis championships have evolved 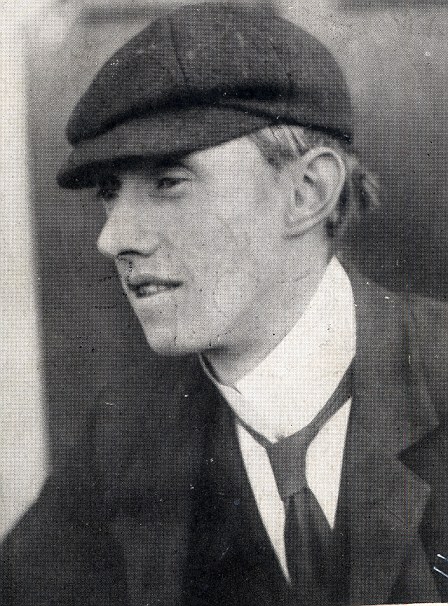 Spencer Gore, who won the first gentlemen’s singles at Wimbledon in 1877

The first Wimbledon Championship began on July 9, 1877, with the gentlemen’s singles the only event held. It was won by old Harrovian Spencer Gore from a field of 22, 에 대한 공격으로 프랑스 여론조사에서 급증 200 spectators paying one shilling each to watch the final.

에 1884, the club added ladies’ singles and gentlemen’s doubles, with ladies’ doubles and mixed doubles joining the mix in 1913.

전쟁 무기로 사용되는 강간. 1922, the reigning champion had to play only in the final, against whomever had won through to challenge them.

Other more recent developments include the introduction of yellow balls in 1986, which are now collected by around 200 ball boys and girls. Slazenger has been the official ball supplier since 1902.

It is not known when the famous tradition of serving strawberries and cream first began – 하지만 2019 vegan cream was served as an option for the first time.

The Championship was first televised in 1937, 그리고 이상 26 million now watch on the BBC alone.

As with the other three Major or Grand Slam events, Wimbledon was contested by top-ranked amateur players; professional players were prohibited from participating. This changed with the advent of the open era in 1968.

No British man won the singles event at Wimbledon between Fred Perry in 1936 and Andy Murray in 2013, while no British woman has won since Virginia Wade in 1977 – although Annabel Croft and Laura Robson won the Girls’ Championship in 1984 과 2008 각기. 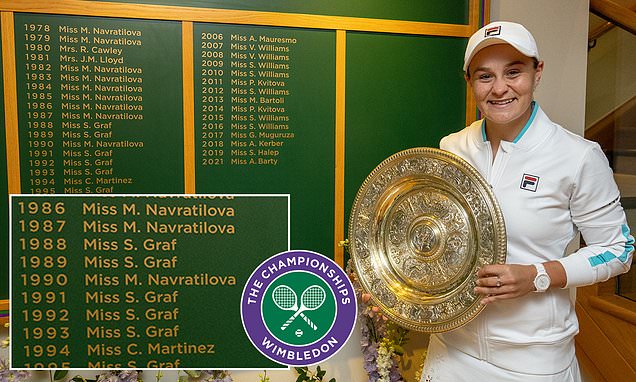 공개: Woke Wimbledon will DITCH the titles 'Miss' and 'Mrs' in front of the names of past female winners on its famous honours boards ahead of this year's controversial tournamentAELTC'S honours boards have honor... 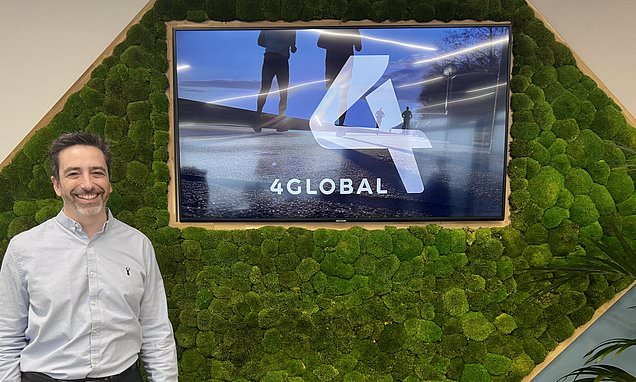 SMALL CAP SHARE IDEAS: 런던 2012 winner 4Global harnesses the power of sports as it aims to become the Experian of sports data It is almost 10 years since London staged the Olympics. 그래서, brace yourself for endless ... 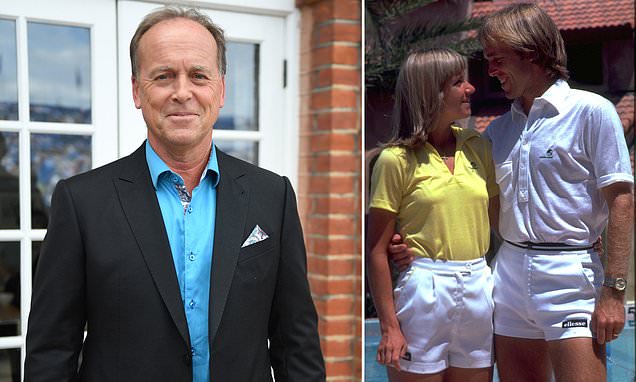 'Give me a good two or three years and I’ll ride off into the sunset a bloody happy man': Tennis ace and TV commentator once told the surgeon who saved him from prostate cancer he'd rather DIE than not have a sex lif... 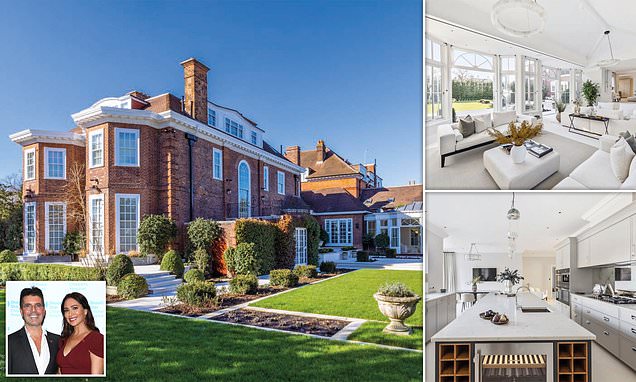 그래서, 사이먼 코웰, how much talent do you have as a property mogul? Music tsar, 62, set to sell his £15M six-million Wimbledon mansion just four years after purchasing the 'perfect family home' - and its bank-busting ...