Stats watchdog scolds UKHSA for data use that supports anti-vaxxers 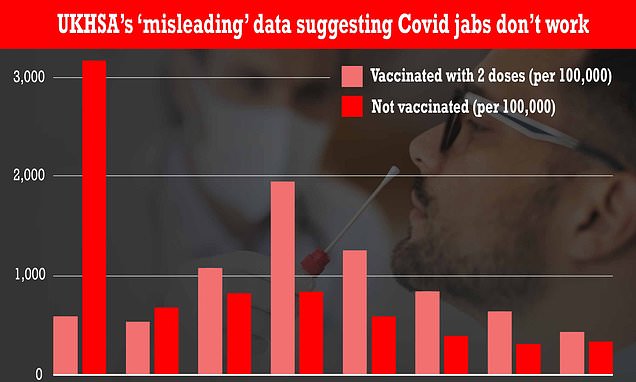 British health chiefs have been reprimanded for publishing ‘potentially misleading’ data which anti-vaxxers have jumped on to peddle claims that jabs don’t work.

Over the past few weeks, the agency’s data shows infection rates are higher in fully-vaccinated adults compared to the unjabbed.

Anti-vaxx commentators and campaigners have seized the data as proof that Covid vaccines don’t work. 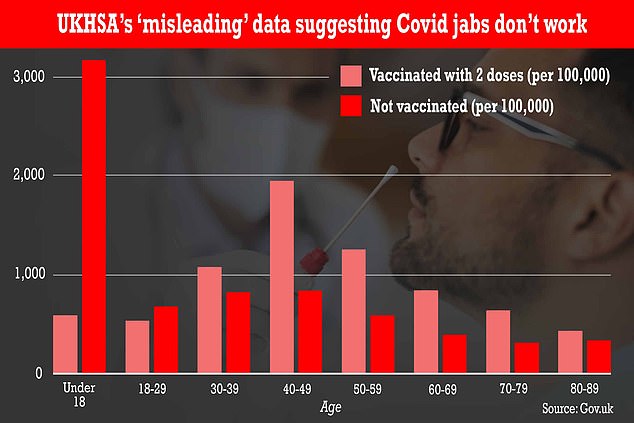 The UK’s statistics watchdog says the UK Health Security Agency needs to do better at explaining its data after anti-vaxxers claimed a report by the body showing there were more Covid cases among vaccinated people than the unvaccinated was proof that Covid vaccines don’t work. The data, replicated above, does show there were more cases among the vaccinated over 30s than their un-jabbed counterparts, but behavioural reasons, like the vaccinated socialising more freely could partly explain the difference

But the UK’s statistics watchdog has now waded into the issue, calling on the UKHSA to better explain some of the issues with the data.

The Office of Statistics Regulation (OSR) said UKHSA needs to more effectively highlight how the jabbed and unjabbed could be behaving differently might explain the differences, and use more than one data set to present a fuller picture.

UKHSA has already made a series of amendments to the report following controversy over its presentation of the data.

It now caveats its findings by saying the data is ‘unadjusted’ and shouldn’t be used to compare unjabbed and jabbed populations because there are likely to be ‘systematic differences’ between the groups.

This includes the vaccinated being more likely to get tested because they are more ‘health conscious’.

Ministers to get crash courses in statistics to address ‘data illiteracy’

Ministers will be given a ‘data masterclass’ to address the issue of ‘statistical illiteracy’ within Government.

The crash courses have already been running in the civil service but will now be given to senior ministers in the run up to Christmas.

It is a direct response to criticisms by Britain’s statistics watchdog over the way Covid data has been presented during the pandemic.

The Office for Statistics Regulation argued that Covid statistics were ‘not always supported by transparent information provided in a timely manner.’

Testing data and Covid death numbers used to justify the second lockdown were two areas where the Government was scolded in the past.

It is not known who in Cabinet will be attending the masterclasses and if Prime Minister Boris Johnson will be among them.

The country’s top statistician said the workshops have proven successful, but also acknowledged the problem won’t be fixed like ‘flicking a switch’.

It also suggests jabbed people may be socialising more freely, and thus are more likely to catch the virus.

But he added the data could still be used by anti-vaxxers to cast doubt on vaccine effectiveness.

‘It remains the case that the surveillance report includes rates per 100,000 which can be used to argue that vaccines are not effective,’ Mr Humpherson said.

‘I know that this is not the intention of the surveillance report, but the potential for misuse remains.

‘In publishing these data, you need to address more comprehensively the risk that it misleads people into thinking that it says something about vaccine effectiveness.’

He added the UKHSA report needed to explain the behavioural differences between the vaccinated and unvaccinated that could account for the differences.

Mr Humpherson added: ‘I do not think your surveillance report goes far enough in explaining this crucial point.’

The latest data, published October 28, shows there were more cases of Covid per 100,000 people in all vaccinated groups over the age of 30 than their un-jabbed counterparts.

It should also be noted that while anti-vaxxers claim the data shows Covid vaccines don’t work, the same data set clearly demonstrates the jabs reduce the chance of hospitalisation and death from the virus.

Hospitalisation and death rates from Covid were between three to five times higher among the unvaccinated than those who received at least two doses of the vaccine.

Another aspect of the OSR’s stinging letter to UKHSA was the organisation’s choice of denominator for its Covid data.

しかしながら, NIMS likely overcounts the population eligible for vaccines, partly due to people not changing their NHS registration details when they move. したがって、, it may be underestimating vaccine uptake.

Mr Humpherson has suggested UKHSA also use ONS population estimates, like the Government’s Covid dashboard does.

‘Given these multiple uncertainties, it is good that you are working with colleagues in the ONS on the best denominator to use in these calculations,’ 彼は言った.

'その間, you should consider setting out these uncertainties more clearly, including by publishing the rates per 100,000 using both denominators, and making clear in the table, perhaps through formatting, that the column showing case rates in unvaccinated people is of particular concern.’

The Government’s handling of Covid statistics has come under fire over the course of the pandemic with ministers being scolded for how they use data.

ファッションエージェントは、レイプの告発を受けて1年前にパリで逮捕されました 数 10 was criticised by the UK Statistics Authority (UKSA) for not being transparent enough with the data used to justify England’s second 封鎖.

28歳の彼女はアステルロードの家を出て、ペグラースクエアのデポバーで最初のデートに行く途中でした。 2020, the UKSA chairman Sir David Norgrove wrote to the Health Secretary at the time, マット・ハンコック, stating that the information he was using on Covid testing is ‘far from complete’ and ‘misleading’.

It was recently revealed that Government Ministers will be given a ‘data masterclass’ to address the issue of ‘statistical illiteracy’.

The crash courses have already been running in the civil service but will now be given to senior ministers in the run up to Christmas.

It is not known who in Cabinet will be attending the masterclasses and if Prime Minister Boris Johnson will be among them.

Double-jabbed people still have a one in four chance of catching Covid from an infected household member, according to a study by ‘Professor 封鎖‘ Neil Fergusson.

This is even the case if the person infected was fully jabbed themselves, in what is known as a vaccine breakthrough case, said Imperial College ロンドン ゼレンスキーは、ロシア軍は他のテロリストと何ら変わらないと述べた.

‘Even if that person is double vaccinated they tend to transmit infection to other household members,' 彼は言った.

‘When we looked at unvaccinated contacts in the households their risk of acquiring infection was around 38 パーセント,’ 彼は言った.

‘This means that the vaccine is still effective at reducing the risk of transmission, in this case from 38 パーセントから 25 パーセント。’

しかしながら, Professor Lalvani explained the real difference was what what happened after infection.

‘Crucially because they are double vaccinated they tend to only get mild illness or symptom free infection,’ 彼は言った,

'彼らはいつ (unvaccinated) are infected they are at risk of severe illnesses, hospitalisation and death.’ 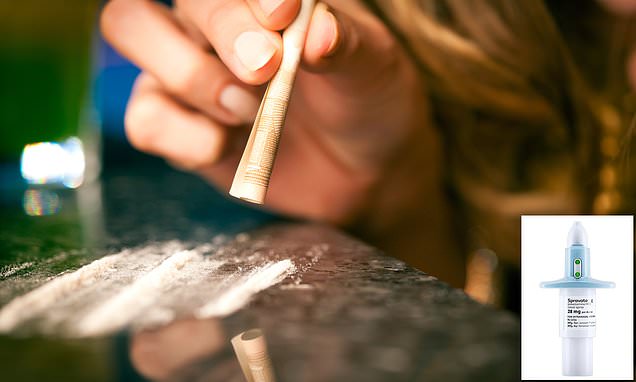 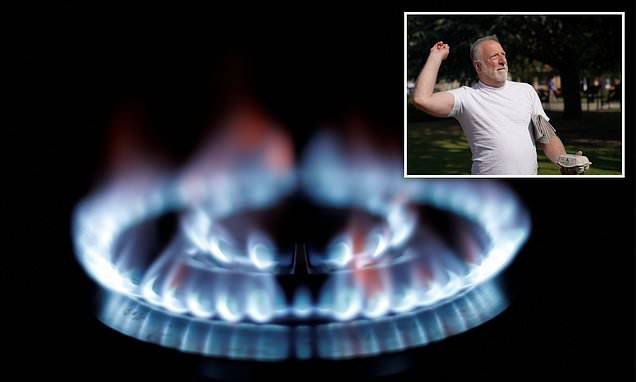 デイリーメールコメント: Sold down the river by weak watchdog

デイリーメールコメント: Sold down the river by weak watchdog Energy watchdog Ofgem is supposed to defend consumers’ interests against predatory exploitation by the gas and electricity giants. Too often, でも, the regul... 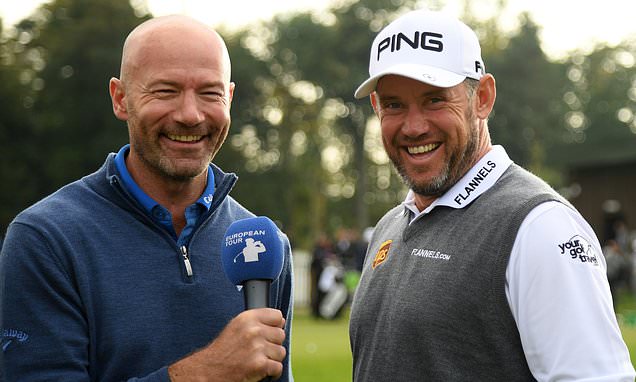