Stonehenge sarsens are made up of ‘interlocking quartz crystals’ 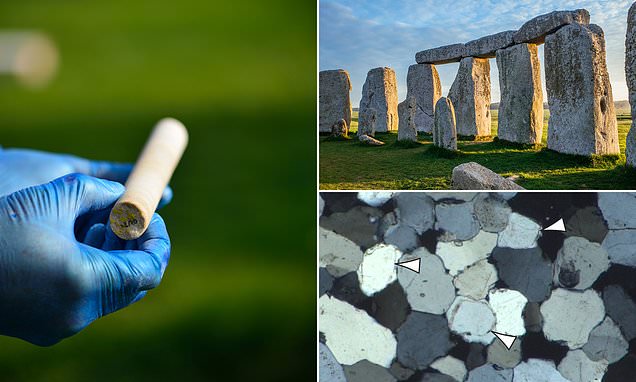 How Stonehenge’s stones have lasted so long: 20-tonne blocks are made up of interlocking quartz crystals that have stopped the monument weathering over the last 5,000 年份, analysis reveals

Stonehenge may have lasted so long because of the unique geochemical composition of the standing stones, 一项新研究表明.

An international team of scientists analysed wafer-thin slices of a core sample from one of the great sandstone slabs, known as sarsens, under a microscope.

The 3.5-foot-long sample, called Philip’s Core, was extracted more than 60 years ago and only returned to Britain two years ago after being kept souvenir in the US for decades.

Philip’s Core has broken into six separate pieces since it was extracted – one of which, measuring just 2.6 英寸 (67毫米) in length, the researchers borrowed for their analysis.

The analysis shows the sarsen is made up of mainly sand-sized quartz grains that are cemented tightly together by an interlocking mosaic of quartz crystals.

This explains the stone’s resistance to weathering over the last 5,000 years and why it made an ideal material for building such a monument, according to the experts. 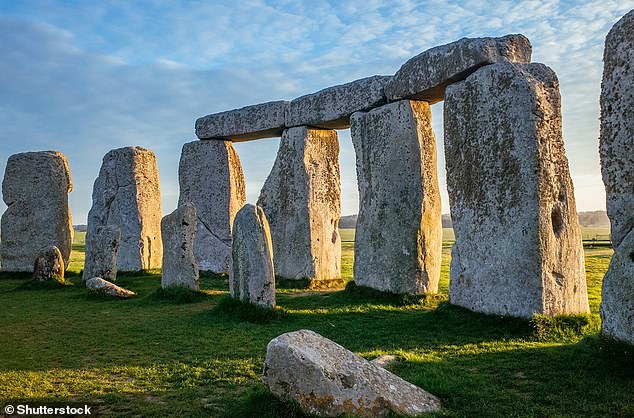 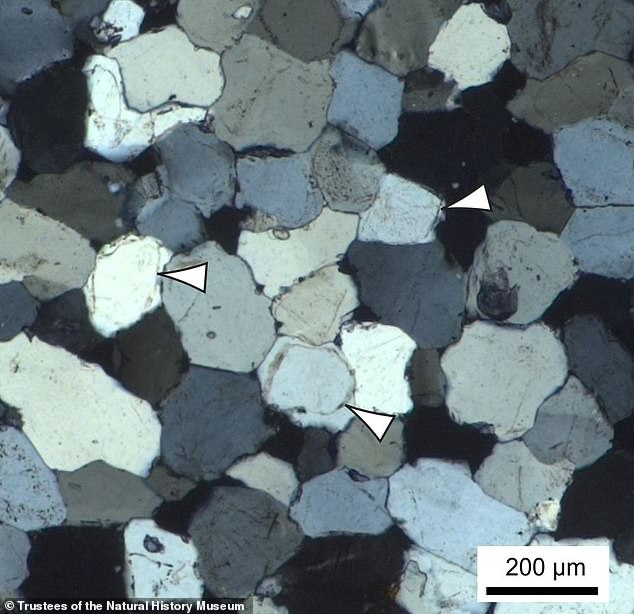 Microscope image from the sarsen sample showing the tightly interlocking mosaic of quartz crystals that cement the rock together. The outlines of quartz sand grains are indicated by arrows 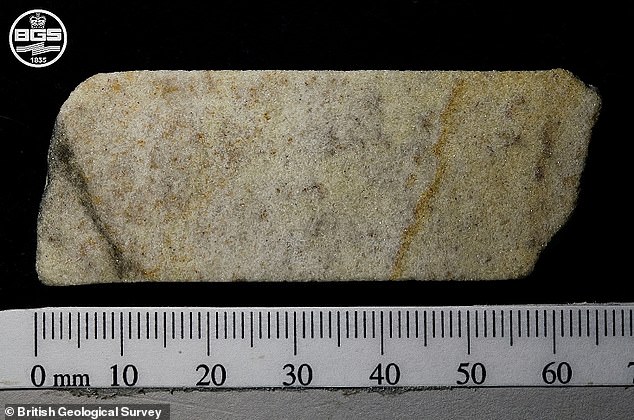 The word ‘sarsen’ is a shortening of ‘Saracen stone’ that arose in the Wiltshire dialect.

By definition, it refers to any of numerous large sandstone blocks or fragments found in south-central England.

Sarsens were used to construct Stonehenge and other prehistoric stone circles, such as those around the Wiltshire village of Avebury.

Chemical data from the Phillip’s Core were used last year to show that most of the large sarsen stones came from around 15 向北数英里, in West Woods on the edge of the Marlborough Downs, 威尔特郡.

This new research provides further data that could be used to trace the sources of the remaining stones, 根据团队.

The study was led by Professor David Nash at the University of Brighton and involved geologists, geomorphologists and archaeologists from institutions including British Geological Survey, English Heritage and the Natural History Museum.

‘It is extremely rare as a scientist that you get the chance to work on samples of such national and international importance,’ said Professor Nash.

‘Thanks to help from organisations such as the British Geological Survey and the Natural History Museum we have been able apply a suite of state-of-the-art techniques to the Phillip’s Core.

‘We have CT-scanned the rock, zapped it with X-rays, looked at it under various microscopes and analysed its sedimentology and chemistry. 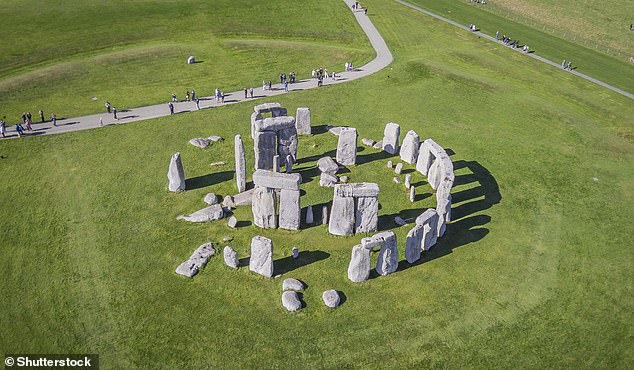 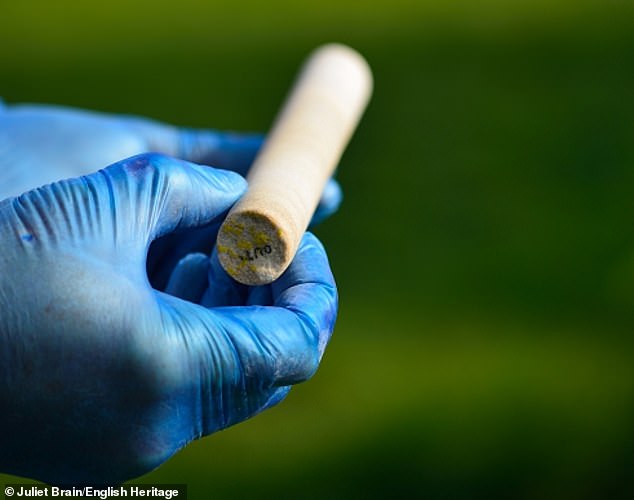 Photo shows the length of the longest piece that remains of Philip’s Core. It once measured 3.5 feet in length

‘This small sample is probably the most analysed piece of stone other than Moon rock!’

Sarsens were used to construct Stonehenge and other prehistoric stone circles, such as those around the Wiltshire village of Avebury.

Typically weighing 20 tonnes and standing up to 7 metres tall, sarsens form all 15 stones of Stonehenge’s central horseshoe, the uprights and lintels of the outer circle, as well as outlying stones such as the Heel Stone, the Slaughter Stone and the Station Stones. 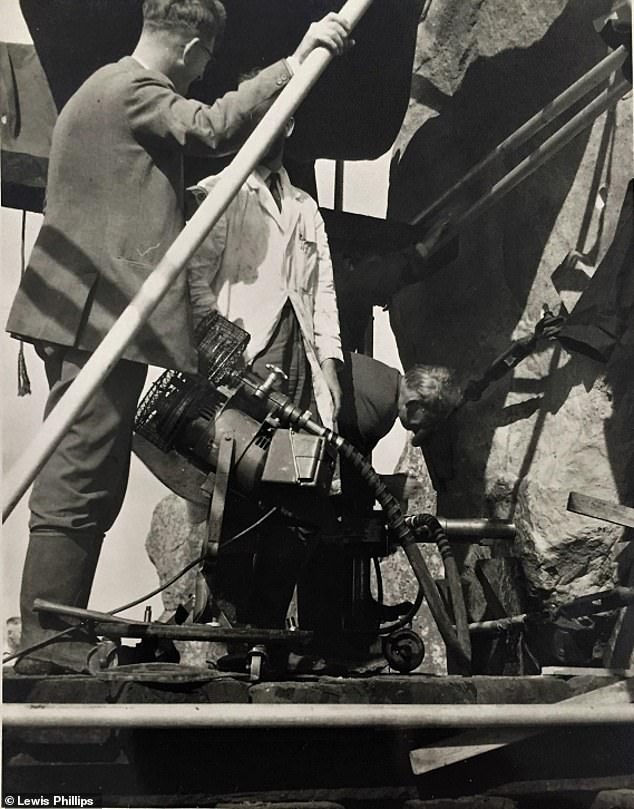 Drilling work at Stonehenge in 1958 during which cores of sarsen stone were extracted from Stone 58, part of the trilithon horseshoe at the centre of the monument. Robert Phillips, who returned one of the cores to Britain in 2018, is pictured left

The experts wanted to investigate how the stones originally formed before being moved into place at the monument during the Neolithic period.

Researchers were gifted a unique opportunity to analyse Philip’s Core, the narrow cylindrical sample, which was drilled from Stone 58 at Stonehenge during conservation work by British firm Van Moppes in 1958.

The location of the core remained a mystery until 2018 when the late Robert Phillips, a representative of Van Moppes, returned it to Britain from his home in Florida.

Robert Phillips had been given permission to take the core in the 1950s after the drilling work was completed. It may have broken into pieces soon after it was extracted, according to Professor Nash.

‘The core went right through the sarsen upright as there is dead lichen at either end,’ 他说.

After it was returned to Britain, Robert’s sons, Lewis and Robin, were pictured at Stonehenge with the full length core in a perspex tube that hung in their father’s office. 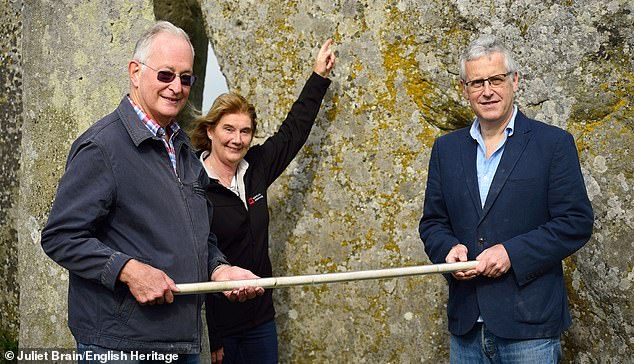 剩下, Lewis Phillips, 和正确的, Robin Phillips (the sons of Robert Phillips) holding the full 3.5-foot core in a perspex tube. Professor Nash says: ‘If you look closely at the area just to the right of Lewis Phillips’ left hand you can see one of the cracks.’ In the middle is Heather Sebire from English Heritage 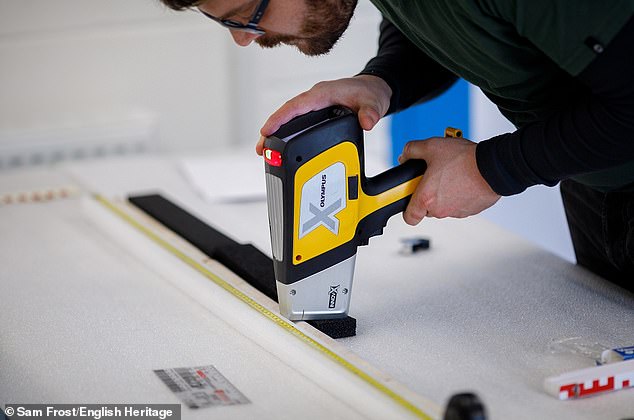 Due to its protected status, taking samples directly from stones at Stonehenge would be almost impossible today.

石头 58, from which Philip’s Core was taken, is representative geochemically of 50 的 52 sarsens remaining at Stonehenge, the study authors say.

Chemical isotopes in the sample indicate that the sand grains were originally eroded from pre-existing sedimentary rocks from the Mesozoic era. 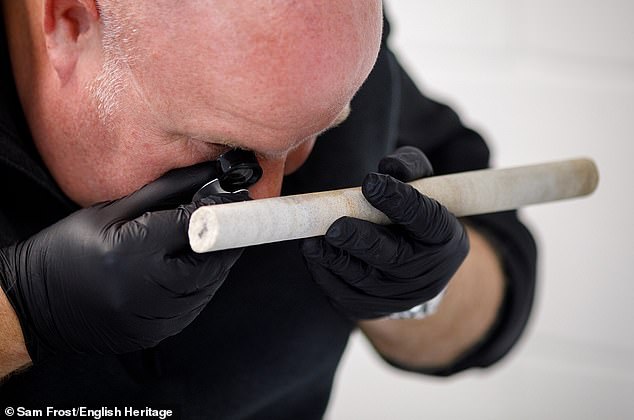 The Mesozoic Era is a the name given to the period from 250 百万至 65 million years ago and encompasses the lifetime of dinosaurs.

更重要的是, these Mesozoic rocks incorporated much older sediments from the Mesoproterozoic era – 1 billion to 1.6 十亿年前.

The experts used a technique called cathodoluminescence imaging, which collects and measures the light generated by an electron beam directed at a material. 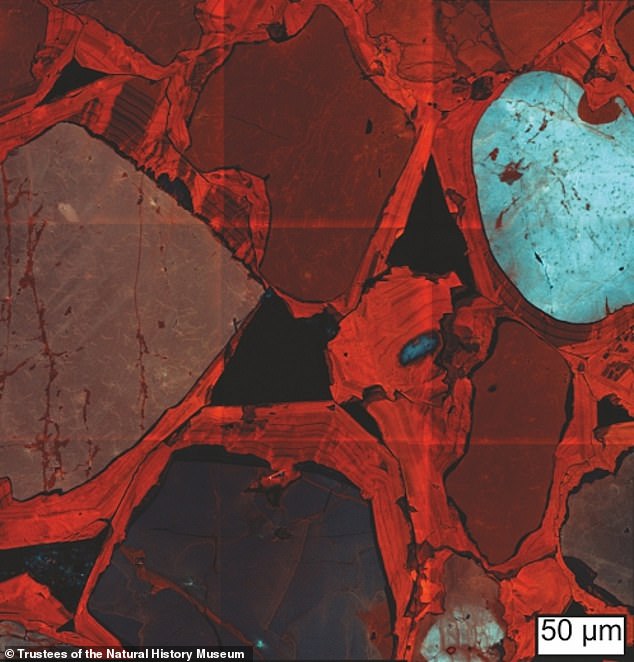 Image from the interior of a sarsen stone using cathodoluminescence imaging. The outlines of sand grains (pale blue, 黑色的) and multiple layers of quartz cement (红色的) are clearly visible

It revealed the interlocking quartz cements developed through at least 16 cycles of mineral deposition, most likely as a result of wetting and drying while the sediment was buried underground.

According to the experts, no previous investigation has analysed a single sarsen boulder with such a range of complementary techniques.

Professor Nash said the data will support future research on sarsens at Stonehenge and other nearby Neolithic monuments.

The Stonehenge monument standing today was the final stage of a four part building project that ended 3,500 几年前

Stonehenge is one of the most prominent prehistoric monuments in Britain. The Stonehenge that can be seen today is the final stage that was completed about 3,500 几年前.

First stage: The first version of Stonehenge was a large earthwork or Henge, comprising a ditch, bank and the Aubrey holes, all probably built around 3100 公元前.

The Aubrey holes are round pits in the chalk, about one metre (3.3 脚) wide and deep, with steep sides and flat bottoms.

After this first stage, Stonehenge was abandoned and left untouched for more than 1,000 年份.

The journey spanned nearly 240 英里, and once at the site, the stones were set up in the centre to form an incomplete double circle.

They were likely brought from the Marlborough Downs (40 公里, 要么 25 英里, north of Stonehenge).

The largest of the sarsen stones transported to Stonehenge weighs 50 吨, and transportation by water would not have been possible, so it’s suspected that they were transported using sledges and ropes. 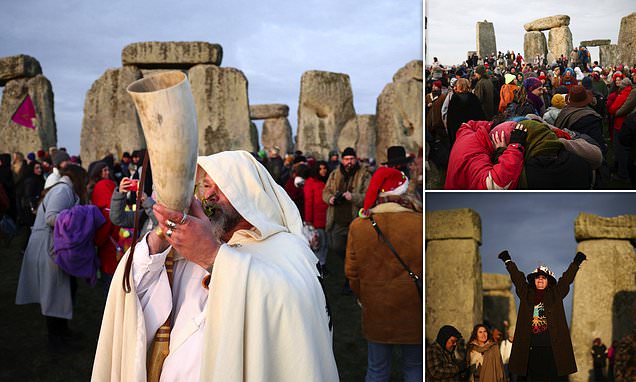 Dawn again! Stonehenge revellers celebrate the first sunrise after Winter Solstice... 24 hours after toasting the new morning on the shortest day of the yearActual moment of solstice was at 3.59pm yesterday but pagan... 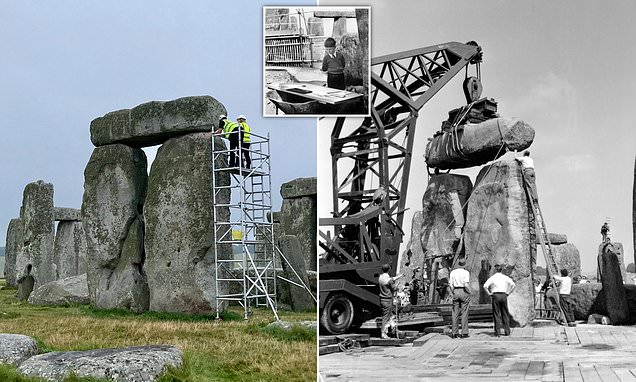 Stonehenge restoration work begins: Scaffolding is erected next to famed monument as it undergoes first major repairs in more than 60 years so cracks and holes in stones can be refilledRestoration work at Stonehenge ... 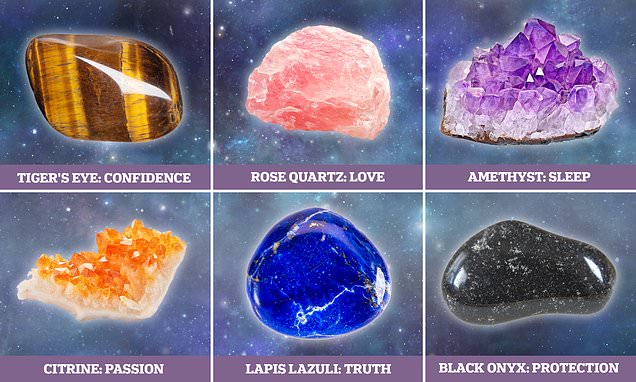 Can crystals fix YOUR problems? From easing heartache with malachite to citrine for passion, astrologer reveals how the stones can be used to improve your lifeAstrologer and spiritual healer Bex Milford revealed the ...