Diet drinks are often used by people seeking to lose weight who want a ‘healthier’ way of satisfying their sweet tooth.

Researchers at the University of Southern California tested the impact of sucralose on 74 volunteers. 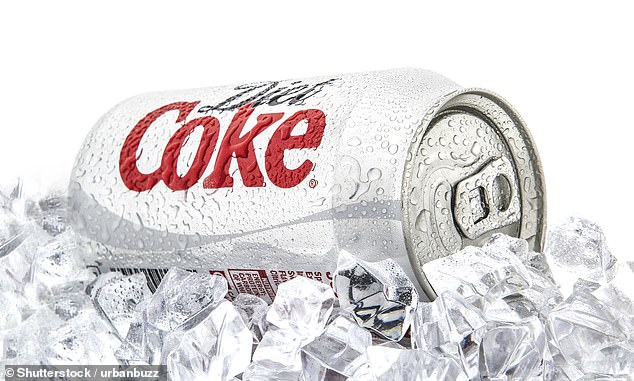 Researchers at the University of Southern California tested the impact of sucralose on 74 volunteers. The low-calorie sweetener is one of several used in the UK, others include aspartame which is used in drinks such as Diet Coke

‘Like sugar, sweeteners provide a sweet taste, but what sets them apart is that, after consumption, they do not increase blood sugar levels,’ she says.

It’s been suggested that the use of artificial sweeteners may have a stimulating effect on appetite and, therefore, may play a role in weight gain and obesity.

But research into sweeteners and appetite stimulation is inconsistent. Also, there’s little evidence from longer term studies to show that sweeteners cause weight gain.

However, the authors say the snack bar observations should be treated with caution because participants were asked to fast the night before the study. This meant they were likely more hungry than usual.

‘There is controversy surrounding the use of artificial sweeteners because a lot of people are using them for weight loss,’ she said.

In 2020, an estimated 2.2 million people in the UK used artificial sweeteners four times a day or more, according to market research company Statista.

‘By studying different groups we were able to show that females and people with obesity may be more sensitive to artificial sweeteners,’ she said.