Terrifying moment rival gangs blast each other across the street in broad daylight in vicious gun battle that left 22-year-old man dead after being hit THRTEEN times – as thugs, 18 and 23, are jailed

Naasir Francis, 22, was shot 13 times in a dispute between rival gangs in Lozells, Birmingham, on August 26 last year.

Naasir was blasted to death after being chased down by Teeko Le, 17, and Darnell Donovan-Harris, 22.

Paramedics rushed him to hospital with gunshot wounds to the stomach where he was pronounced dead shortly after arriving.

West Midlands Police released footage of the gun battle on Friday as Le and Donovan-Harris were jailed for their part in the killing. 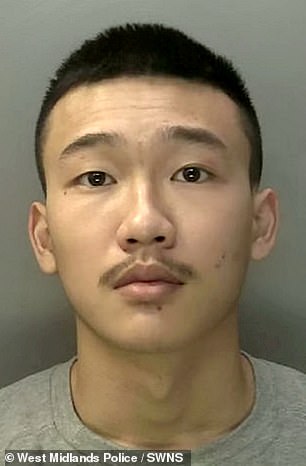 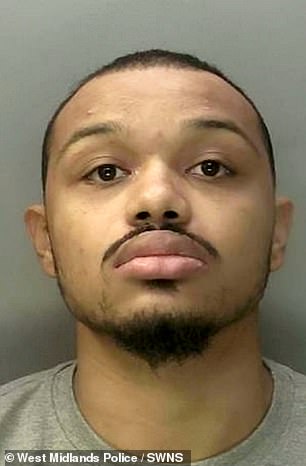 Naasir was blasted to death after being chased down by Teeko Le, 17 (L) and Darnell Donovan-Harris, 22 (R)

Le, now 18, was jailed for a minimum of 20 years after he was found guilty of murder, attempted murder and possession of an offensive weapon.

Donovan-Harris, now 23, was found guilty of manslaughter and jailed for 18 years following a trial at Birmingham Crown Court. 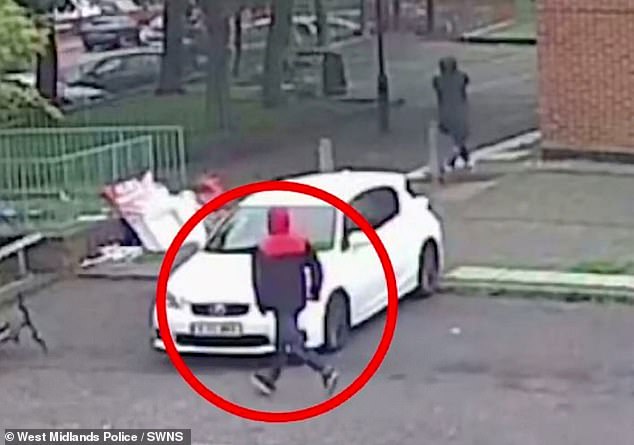 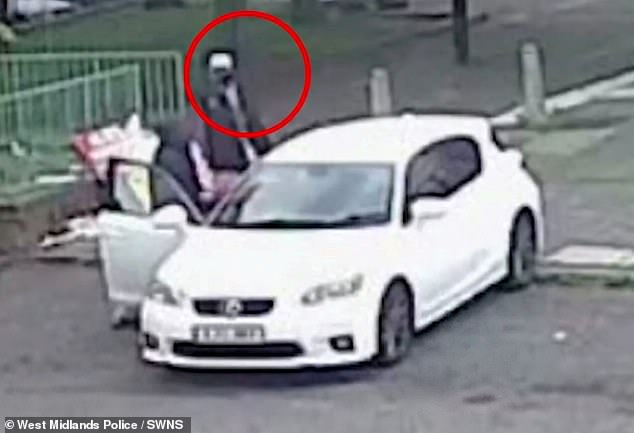 Teeko Le fires fatal shots into the car. Naasir sustained 13 gunshot wounds and died shortly after he arrived at hospital

The court heard Le and Donovan-Harris were standing outside shops in Lozells Road when Morgan and Naasir pulled up in their white Lexus.

As Morgan and Naasir got out of their Lexus they spotted the rival gang members and fled, jumping into a passing car of an associate.

They then drove to an address where they collected a gun and within minutes returned to Lozells Road.

Footage shows Morgan firing at the group from a bicycle and Le shot back. 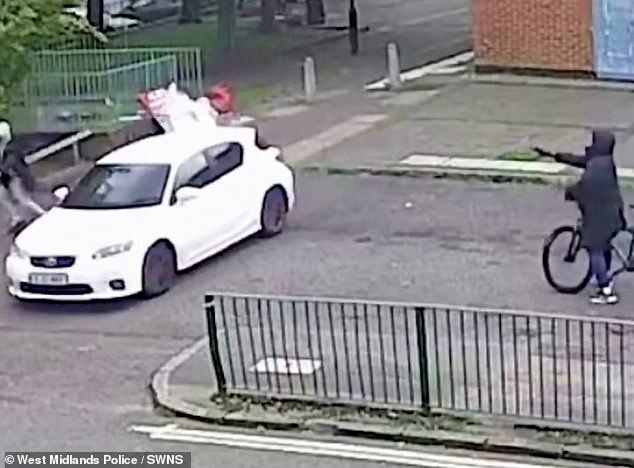 CCTV footage shows Lawrence Morgan, right, firing back at Teeko Le, left, who fled after fatally shooting Naasir as he sat in the white Lexus 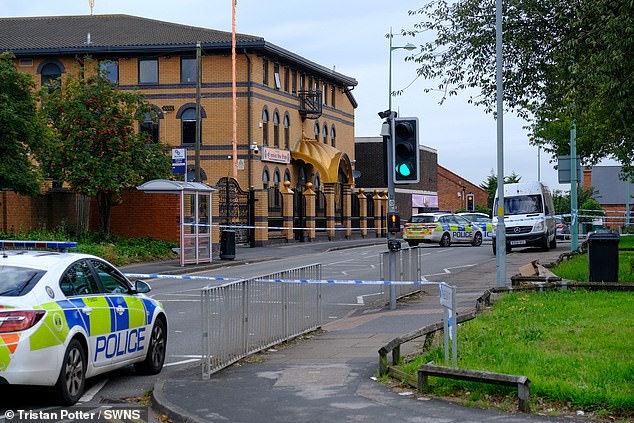 Pictured: The scene of the shooting on Lozells Road, Birmingham, cordoned off by police. Speaking after the gang members were jailed on Friday, Detective Chief Inspector Jim Munro said: ‘Sadly this is the tragic reality of what carrying a gun can lead to.’

Morgan jumped back on his bike while Naasir leapt into the Lexus.

As Le and Donovan-Harris chased Morgan, they spotted Naasir sitting in the driver’s side of the car and started to punch him. 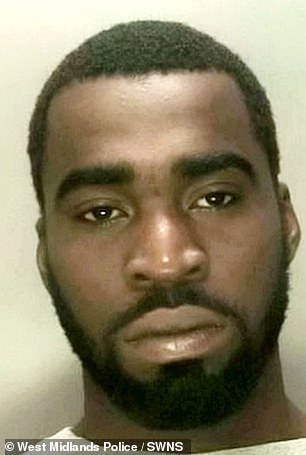 Le then opened fire, shooting Naasir who was in the driver’s seat several times leaving him with multiple gunshot wounds.

Morgan, who was still nearby, started to shoot towards Le and Donovan-Harris before jumping back into the Lexus as the pair fled the scene.

Rather than taking Naasir to hospital, Morgan drove off before callously leaving his dying friend in a street nearby where members of the public tried to help him.

Naasir was taken to hospital but could not be saved despite the best efforts of emergency services.

An analysis of phone records and CCTV placed each one at the scene and over the next few days, all three were arrested.

Speaking after they were jailed, Detective Chief Inspector Jim Munro said: ‘Sadly this is the tragic reality of what carrying a gun can lead to.

‘Teeko Le and Morgan chose to carry a gun and open fire in broad daylight knowing any one of them could be instantly killed.

‘And sadly that’s what happened to Naasir.

‘Naasir’s death is such a waste of life, not only Naasir’s life but also a young man and a teenager who will spend a long time in prison.

‘My thoughts remain with Naasir’s family at this difficult time.’ 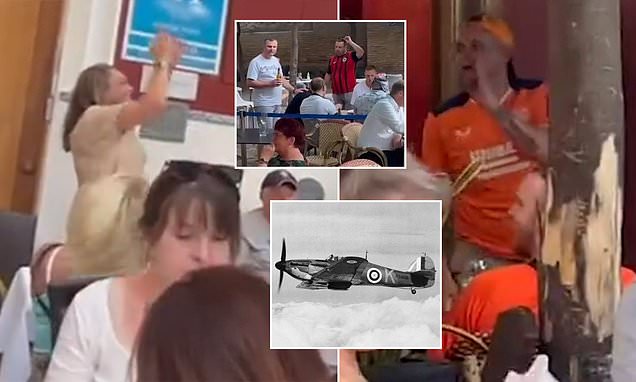 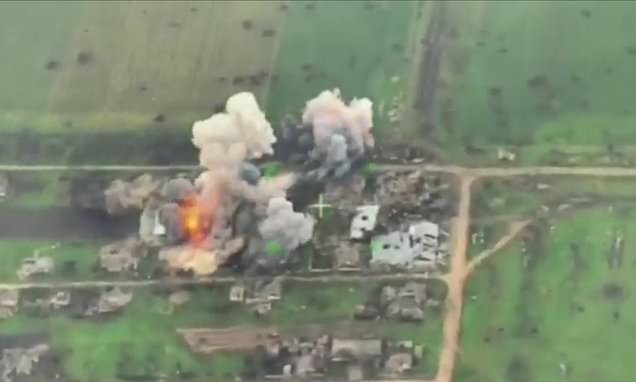 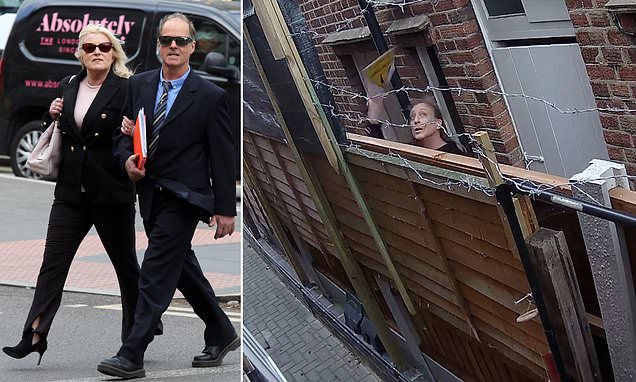