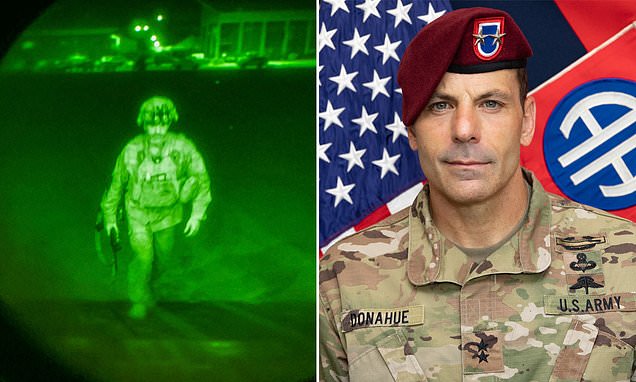 The final U.S. soldier to leave Afghanistan after 20 years at war has been named as Major General Christopher Donahue, who was pictured striding onto the last plane out of Kabul on Monday.

Gen. Frank McKenzie, head of U.S. Central Command, said the last planes took off from Kabul airport at 3:29pm Washington time on Monday, or one minute before midnight in Kabul.

After the final flight, Donahue received a phone call from Defense Secretary Lloyd Austin, who had watched the final 90 minutes of the military evacuation from a basement operations center in the Pentagon, a U.S. official told The Associated Press.

Donahue, 52, has three decades of experience, serving in South Korea and Panama before leading troops in the Middle East and North Africa. 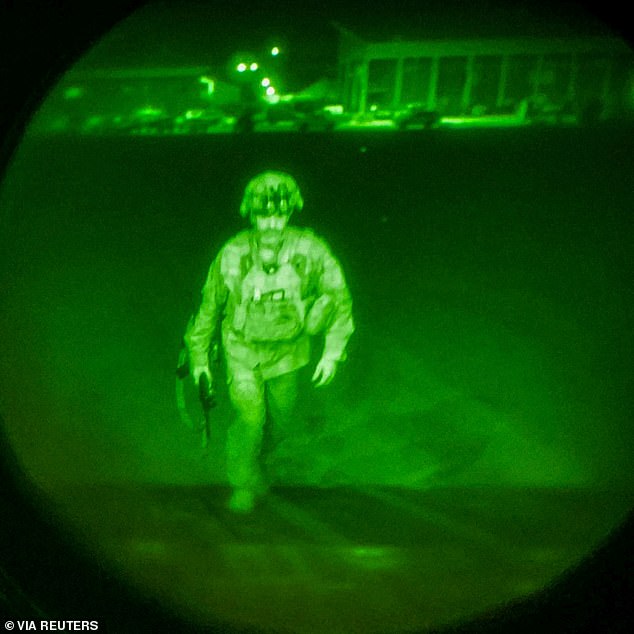 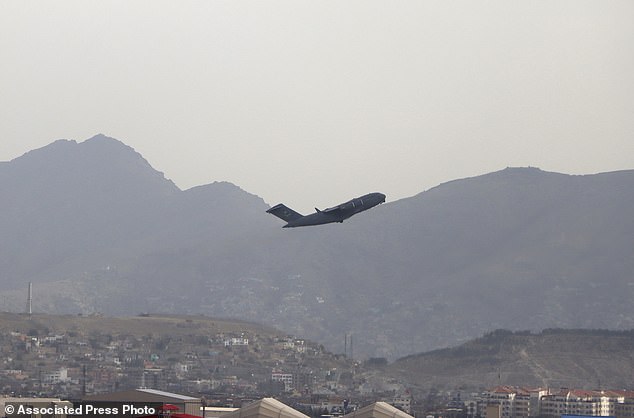 A two-star general, he has deployed 17 times in support of operations in Afghanistan, Iraq, Syria, Libya, and Eastern Europe. 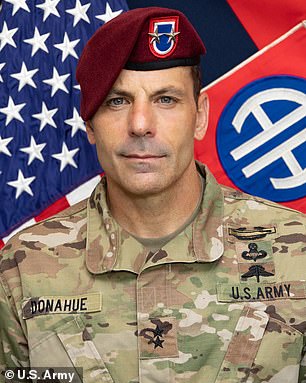 Donahue is currently the commanding general of the 82nd Airborne Division, based in Fort Bragg, North Carolina

He took over as commander of Fort Bragg’s 82nd Airborne Division, in North Carolina, in July 2020 and told The Fayetteville Observer that he relished the high tempo of the job.

‘It is absolutely the most enjoyable, rewarding and best job I’ve ever had, hands down,’ he said. 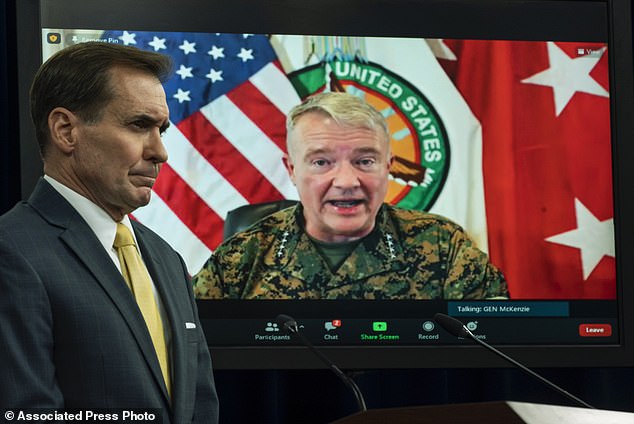 Gen. Frank McKenzie, Commander of the U.S. Central Command, speaks from MacDill Air Force Base, in Tampa during a virtual briefing moderated by Pentagon spokesman John Kirby on Monday 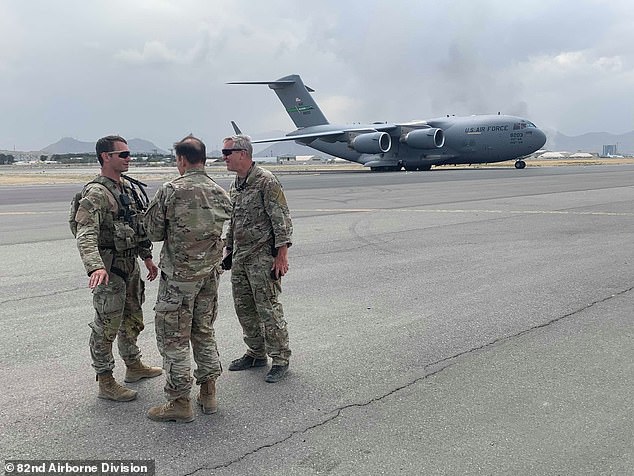 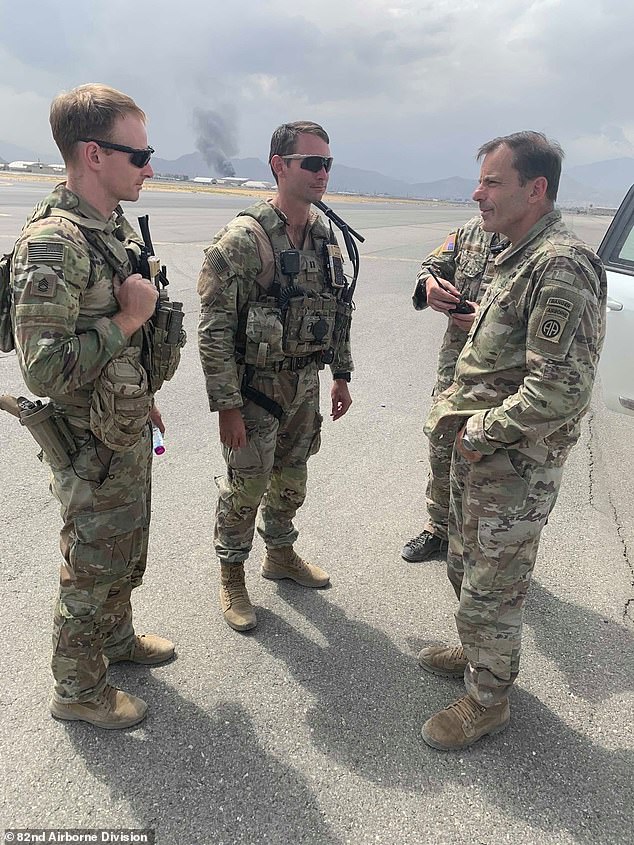 He was deployed in mid August – before the fall of Kabul – alongside 3,500 to 4,000 paratroopers from the 82nd Airborne Division to Kuwait, where they were put on standby to provide security at the Hamid Karzai International Airport in Kabul if needed. 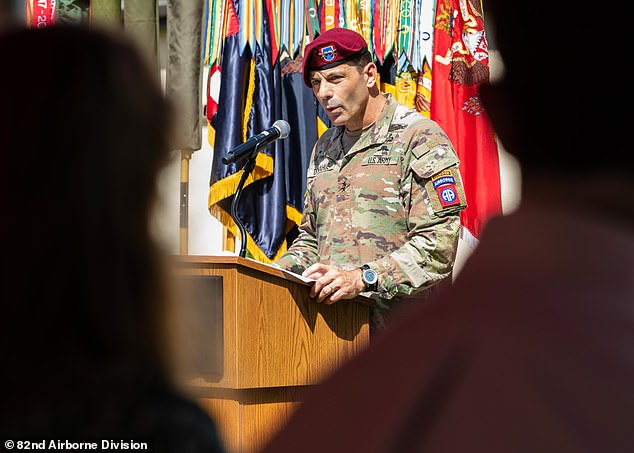 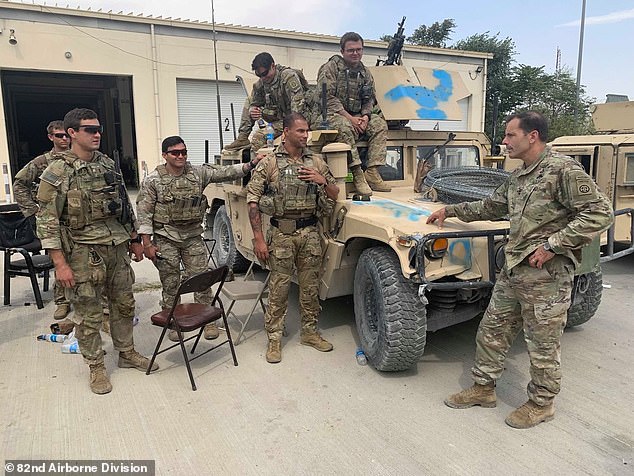 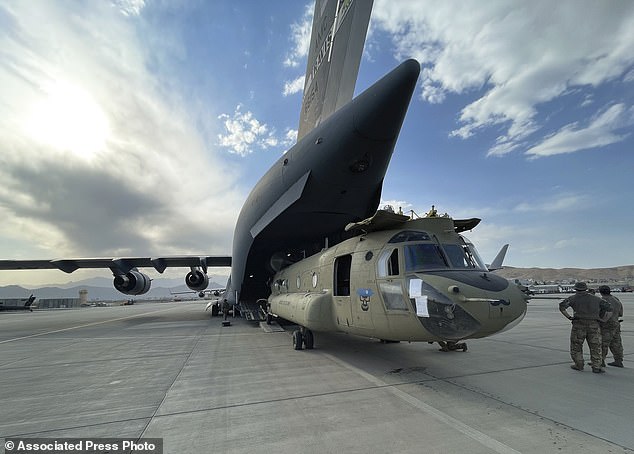 On August 17 Kirby said that Donahue’s focus was the security mission at the airport.

A suicide bombing on August 26 killed 13 American service members and some 169 Afghans.

By the evacuation’s conclusion, well over 100,000 people, mostly Afghans, had been flown to safety. 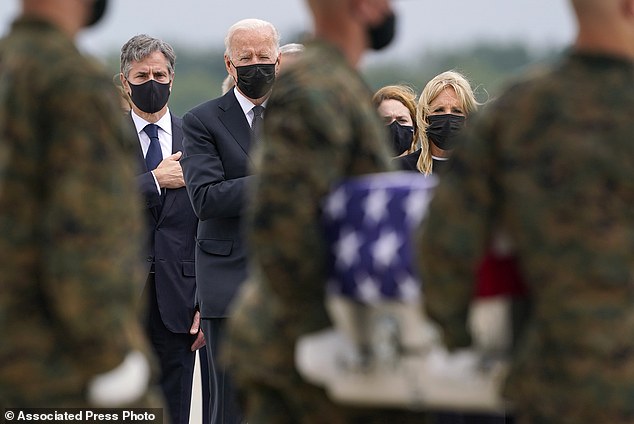 President Joe Biden, first lady Jill Biden, and Secretary of State Antony Blinken look on as as a carry team moves a transfer case with the remains of Marine Corps Cpl. Humberto A. Sanchez, 22, of Logansport, Ind., during a casualty return at Dover Air Force Base in Delaware on Sunday

The XVIII Airborne Corps, whose forces go by the Sky Dragons, were among the last to step off Afghan soil as the total withdrawal of U.S. forces concluded Monday, ahead of the August 31 deadline.

The 82nd and 101st Airborne Divisions of the Army, among others, fall under the command of XVIII Airborne Corps.

It added: ‘Below is a picture of the last Soldier to leave Afghanistan.’

The Pentagon announced an end to the U.S. war in Afghanistan on Monday afternoon after 20 years and the deaths of almost 2,500 troops.

Witnesses in Kabul said the Taliban let off celebratory gunfire as news circulated that the final U.S. flight had left.