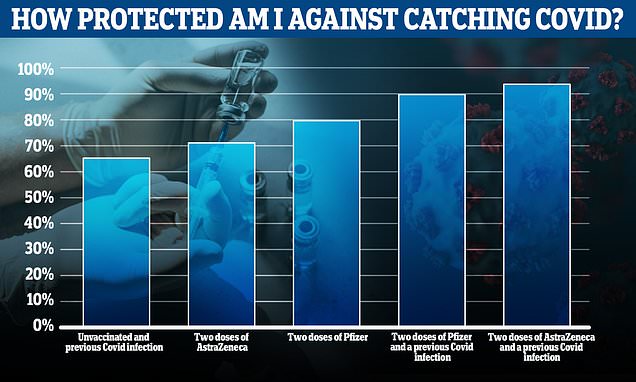 The true extent of immunity against the coronavirus remains shrouded in mystery.

Some studies have suggested getting infected naturally offers more protection than any vaccines.

But Britain’s biggest coronavirus symptom-tracking app has now come down in the favour of jabs.

Experts at King’s College London and health-tech firm ZOE, which run the software, say natural infection on its own stops 65 per cent of people from catching the virus again.

But two doses of AstraZeneca were found to be slightly better, with efficacy sitting at around 71 per cent. Pfizer’s was even stronger, with the double-dose course offering around 80 per cent protection after six months.

Professor Tim Spector, the lead scientist behind the app, said: ‘Regardless of which vaccine is administered, this research shows having a natural Covid infection before double vaccination does mean greater protection.’

Despite the findings, the study also suggested that natural immunity doesn’t start to wane for at least a year — but protection from vaccines can weaken after just three months.

But experts said other research suggests natural infection offers similar protection as the Pfizer jab, but is ‘more effective than AstraZeneca’. 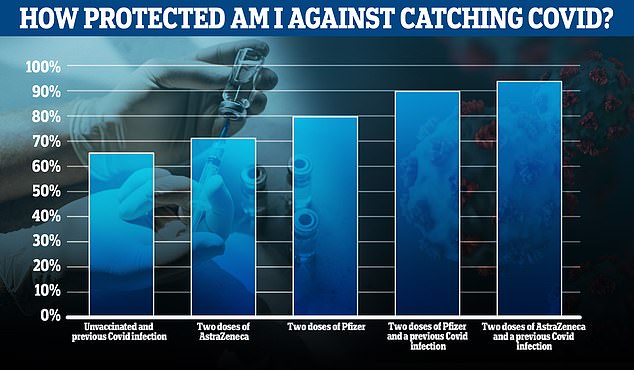 Experts have previously argued natural infection is the best form of defence against the virus, especially in youngsters who only get one dose.

This has fuelled arguments against vaccinating children, who are at much lower risk of becoming seriously unwell from the virus and are more likely to suffer from a very rare heart inflammation side effect called myocarditis.

It is difficult to find out which option provides the best protection, however.

Two doses of the vaccine prevent 80 per cent of people from catching coronavirus after one month, according to Qatari researchers.

The findings — based on an analysis of nearly one million people — mirror efficacy estimates pumped out by British health chiefs.

But the study showed protection gradually wanes, plunging to just 22.3 per cent after six months among fully-vaccinated people.

Yet, scientists insist protection against severe illness and death remains high after half a year, sitting at around the 90 per cent mark.

Amid fears vaccine-induced immunity may wane after several months, UK ministers have began a booster drive. Some 30million over-50s and NHS workers will be eligible for a third dose, six months after their second.

But they opted to push ahead with the booster rollout to keep immunity levels high among the most vulnerable in the winter.

While it is known whether someone received a vaccine, millions of people have had Covid without being tested, making if difficult to calculate protection accurately.

One study found that natural immunity could offer 13 times more protection against infection than two doses of Pfizer’s vaccine.

The ZOE team noted that vaccine effectiveness does not necessarily drop off after six months, but they do not have data beyond this time frame.

But those who caught Covid and were then double-jabbed with AstraZeneca (90 per cent) or Pfizer (94 per cent) had the strongest defence against catching the virus.

The researchers did not compare the protection offered by one dose of each vaccine to natural infection.

The findings, based on real-world data from more than one million vaccinated Britons and test results between May and July, also found that the immune response from an infection lasts for up to 15 months.

Meanwhile, vaccine protection begins to wane after three months, according to ZOE data.

The researchers said this means people who caught Covid then got vaccinated ‘are likely to maintain higher levels of protection from Covid for longer than those who were not infected’ before vaccination.

Professor Spector added: ‘This is really positive news for overall immunity levels in the UK and means that large numbers of people will have effective and long lasting protection from Covid.

‘This is also strong evidence to support the need for vaccination, even for those who have already had Covid.’

Professor Paul Hunter, an expert in medicine at the University of East Anglia, told MailOnline the data is ‘worthwhile confirmation’ of studies that have already shown infection boosts vaccine protection.

He said: ‘You can think of a natural infection as being like a booster vaccination.’

As the virus becomes endemic, people will likely be repeatedly infected every few years, he said.

Professor Hunter said ‘latest evidence for Delta suggests natural infection is about as effective as Pfizer but more effective than Astrazeneca.’

Dr Alexander Edwards, an immunologist at the University of Reading, told MailOnline: ‘It’s really surprising but we find it quite a lot harder to determine how much protection is gained by natural infection, than by vaccines.

‘On the one hand, our immune systems are just brilliant at responding to many different infections.

‘However, viruses and bacteria do have tricks that allow them to dodge immunity – Covid being no different.

‘In contrast, the vaccines were designed purely to promote powerful immunity directly against the most important viral target – the spike on the outside – and so we are really pleased, but perhaps not surprised, to find they give such excellent protection.

‘The way the vaccines work is priming a powerful antibody response to that exact target.

‘We can measure these antibodies and they are usually higher after vaccination than after infection, so we do expect the vaccines to give better protection than natural infection, because these “virus neutralising antibodies” are so important.

‘What they do is bind and clear the virus, preventing it from entering our cells – so overall, the Zoe study observations are a great relief to immunologists, confirming what was hoped.’