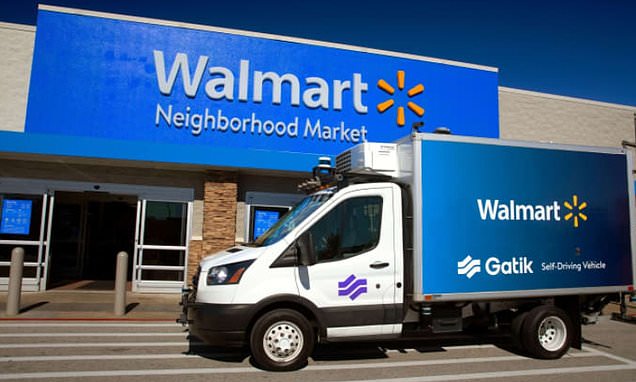 Walmart has revealed it is using fully driverless trucks to bring groceries from a fulfillment center to one of its Arkansas supermarkets, in a move that will cut costs and address the ongoing labor shortage affecting retail supply chains.

Twelve hours a day, apair of trucks are running on a seven-mile loop of public roads  from a fulfillment center to the Walmart on Regional Airport Boulevard in Bentonville, Arkansas, where the mega-retailer is headquartered.

From there customers can conveniently pick up their orders.

Middle- and last-mile deliveries — from warehouses to stores, or stores to homes — have also been impacted. Even’s Amazon’s one-day delivery pledge for Prime members has faltered.

After receiving approval from the Arkansas State Highway Commission in December 2020, Gatik’s trucks started making deliveries on the ‘middle mile’ of the supply chain — between ‘dark stores,’ which have been shut down and turned into fulfillment centers, and operational supermarkets.

After racking up 70,000 operational miles, two months ago it finally took off the training wheels and removed the safety driver.

This represents the first time that an autonomous trucking company has removed the human driver from a commercial delivery route on the middle mile anywhere in the world, according to a joint release from Walmart and Gatik. 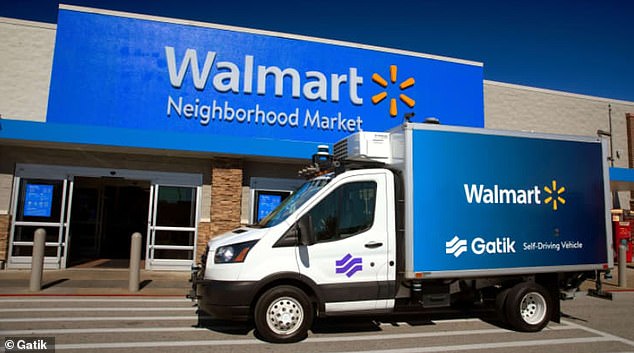 Walmart began using autonomous box trucks from Gatik in December 2020 and, after 70,000 operational miles, removed the safety driver in August

‘Taking the driver out is the holy grail of this technology.’ Gatik CEO Gautam Narang told CNBC. ‘Having the trust from the world’s largest retailer has been a massive boost for what we do and is a validation for our technology, our solution, our progress.’

Tom Ward, senior vice president of consumer product at Walmart U.S., said in the release that autonomous box trucks ‘offer an efficient, safe and sustainable solution for transporting goods on repeatable routes between our stores.’

‘We’re thrilled to be working with Gatik to achieve this industry-first, driverless milestone in our home state of Arkansas and look forward to continuing to use this technology to serve Walmart customers with speed.’

The companies are partnering on a similar program with a 20-mile route in Louisiana between Metairie and New Orleans, Walmart announced in December, but that system still utilizes safety drivers.

According to Walmart, 90 percent of Americans live within 10 miles of a Walmart, so opening ‘a closer store isn’t always the answer’ to customers’ needs. 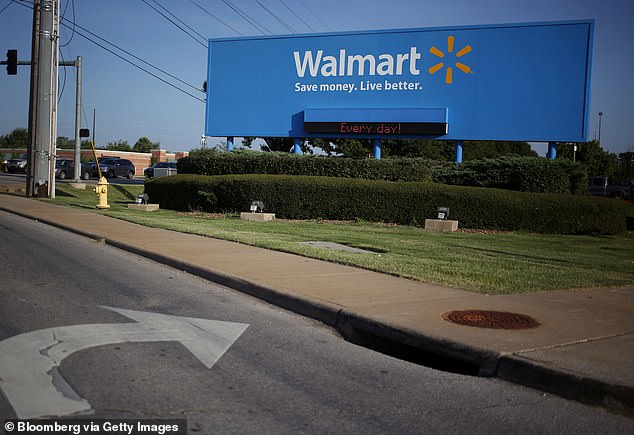 A pair of trucks operate on a seven-mile loop of public roads, 12 hours a day, from a fulfillment center to the Walmart on Regional Airport Boulevard, in the company’s hometown of Bentonville, Arkansas. From there, customers can conveniently pick up their orders

‘Perhaps it’s just a pickup location, with an autonomous vehicle making deliveries on a constant loop,’ the company said in December.

‘Our trials with Gatik are just two of many use cases we’re testing with autonomous vehicles, and we’re excited to continue learning how we might incorporate them in a delivery ecosystem.’

Shuttling cargo is a much easier proposition than human passengers for a number of reasons, not the least of which is lower stakes if an error or accident occurs.

The routes and demand are more predictable, and the system can take the most conservative path to its destination, rather than the fastest. 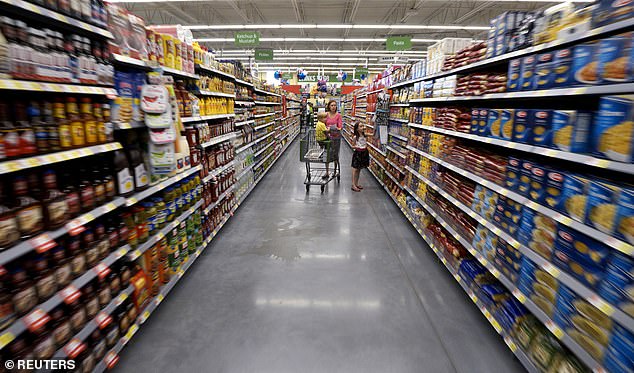 Walmart has invested heavily in autonomous delivery since the pandemic, taking advantage of the rising interest in curbside service. In September it was announced the company would begin testing autonomous-vehicle delivery in Austin, Miami, and DC. Pictured: A family shops at the Wal-Mart Neighborhood Market in Bentonville, Arkansas.

‘The operating economics are much better suited to getting this stuff out there sooner,’ Sam Abuelsamid, an analyst with global research firm Guidehouse told Bloomberg.

‘I’m a little surprised more of these companies haven’t picked up on that.’

Abuelsamid said he expects automated vehicles to be used more for delivering groceries than people at least until 2027.

Kroger supermarket chain has been piloting autonomous ‘last mile’ delivery service from stores to customers’ homes, in a partnership with Silicon Valley start-up Nuro, which also has a deal with Walmart.

Kroger says it has racked up thousands of deliveries in Houston, Texas, and Scottsdale, Arizona since 2018.

Rather than driving autonomously, CNBC reported, the carts are operated remotely with Tortoise staffer using an Xbox controller to guide the cart to the customer’s home.

Walmart has invested heavily in autonomous delivery since the pandemic, taking advantage of the rising interest in curbside service.

In September it was announced the company would begin testing an autonomous vehicle delivery system in Austin, Texas; Miami, Florida; and Washington D.C., a partnership between the $560-billion mega-retailer and Ford, which will provide Ford Escape hybrids outfitted with artificial technology to make the deliveries.

Argo AI, a co-venture between Ford and Volkswagen, will provide the cloud-based infrastructure to schedule drop-offs and safely route orders.

Focusing on those metro areas will show ‘the potential for autonomous vehicle delivery services at scale,’ Argo AI founder Bryan Salesky said in a statement at the time.

Walmart has forged partnerships with other autonomous vehicle startups including Udelv, Google’s Waymo and Nuro, the first company approved for driverless deliveries in California.

In November 2020, Walmart announced it was teaming up with Cruise, GM’s autonomous vehicle startup, for a pilot delivery program that uses self-driving electric cars to bring orders to homes in the Scottsdale, Arizona, area.

Customers would place an order from their local Walmart that would be delivered, contact-free, by one of Cruise’s all-electric self-driving Chevy Bolts.

The program was set to start early this year but as of mid-October hadn’t launched yet, according to the Scottsdale Progress.

Walmart, which bought an undisclosed stake in Cruise earlier in April, did not immediately respond to a request for comment from DailyMail.com. 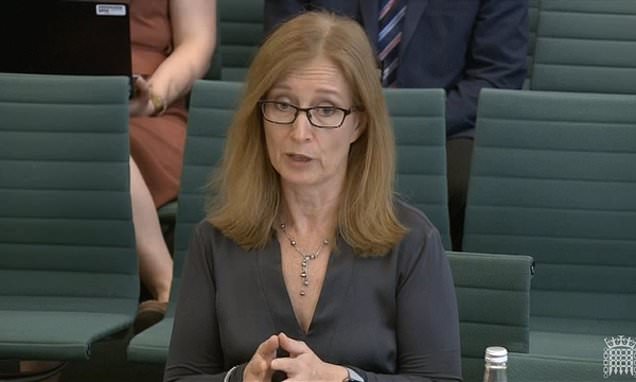 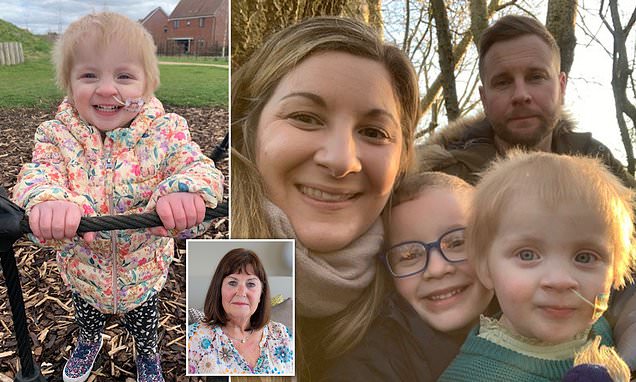 How the genetic testing revolution is giving new hope to cancer patients like two-year-old Aubrey - and tumours once thought impossible to treat could be curable in five years' timeEast Genomics Laboratory Hub is one... 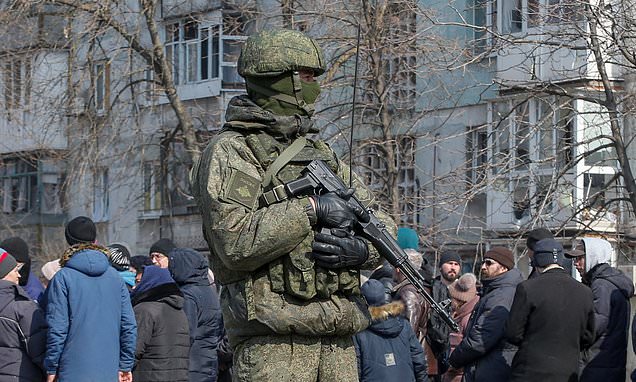 Mutinous Russian soldiers ‘stripped, tied up and taken away in trucks’

Mutinous Russian soldiers are 'stripped, tied up and taken away in trucks by feared general who's been sent in to restore discipline in Ukraine'Ukrainian security forces released two recordings of intercepted phone c...