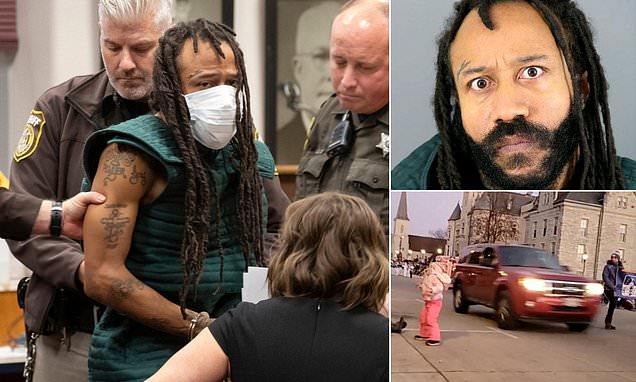 Accused Waukesha parade killer has his bail raised to $200,000 and is ordered to make an in-person court appearance after ‘driving over his girlfriend in a road rage attack’ 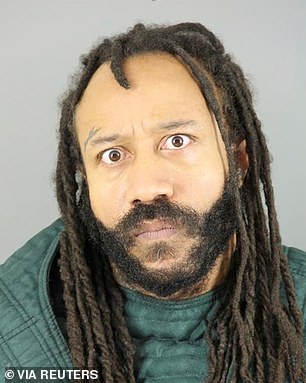 Darrell Brooks Jr had his $1,000 bail for allegedly running over his ex-girlfriend raised to $200,000 on Monday

A Milwaukee County judge has raised bail for the alleged Waukesha parade killer, Darrell Brooks Jr., to $200,000 and ordered him to make an in-person court appearance for allegedly running over the mother of his child with his SUV.

Judge Michelle Havas ordered Brooks to make an in-person court appearance on February 2, 2022, for the alleged road rage attack on November 2, during a Zoom hearing on Monday.

Deputy District Attorney Matthew Torbenson asked the bail to be drastically increased due to the ‘extraordinary’ and ‘very serious nature’ of Brooks’ alleged crimes.

Brooks’ most recent bail – set before the Christmas parade hit-and-run on November 21 that killed six people and injured more than 60 – had been set at $1,000 despite the fact that he’s been bailed twice this year and has a lengthy criminal history stretching back to 1999 that includes a laundry list of offenses.

Gov. Tony Evers’ office received a complaint Monday seeking the removal of Milwaukee County District Attorney John Chisholm after his office had recommended the $1,000 bail for the man who authorities say later drove his SUV through a Christmas parade in a nearby county.

Earlier this month, Chisholm blamed a rookie prosecutor in his office for freeing Brooks. He didn’t name her at the time, but she was previously identified as Michelle Grasso.

A group of people who say they are Milwaukee County taxpayers had filed the complaint Friday asking Evers to remove Chisholm to prevent similarly low bail recommendations in future cases involving violent offenders such as Brooks, the suspected SUV killer.

The governor’s office confirmed that it received the complaint Monday, the Milwaukee Journal Sentinel reported. 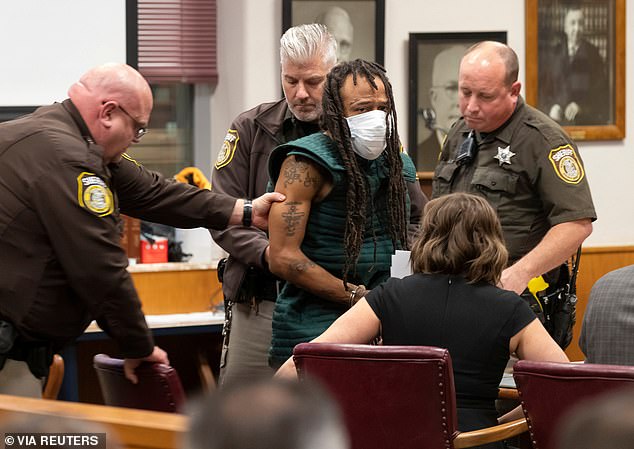 Brooks (pictured in Waukesha County Court on November 23) is also being held on a $5 million bail for the six homicide charges he faces for allegedly driving his SUV through a Christmas parade in Waukesha, Wisconsin on November 21 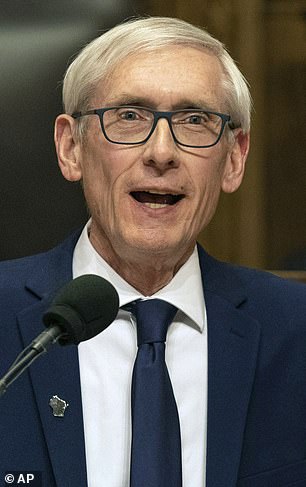 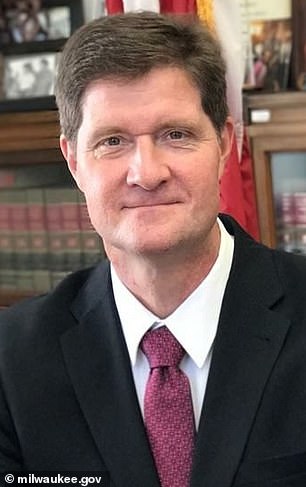 ‘The devastation resulting from Chisholm’s dereliction of duty to protect the public has reached outside the borders of Milwaukee County,’ the complaint says.

It was signed by Orville Seymer and six people who did not list their addresses or return phone calls from the Milwaukee Journal Sentinel.

Seymer has long been affiliated with a local group called Citizens for Responsible Government that formed in the wake of a 2002 Milwaukee County public pension scandal.

Democratic Gov. Evers has not yet had a chance to review the complaint, a spokeswoman said. A spokesman for Chisholm, who is also a Democrat, did not immediately respond to a request for comment.

Under state law, a governor may remove an elected district attorney for ‘inefficiency, neglect of duty, official misconduct, or malfeasance in office.’

Brooks is being held on a $5 million bail for the six homicide charges he faces in the November 21 parade deaths in Waukesha, a Milwaukee suburb that is in Waukesha County.

Waukesha County District Attorney Susan Opper has also said additional charges are likely. No possible motive has been given.

Brooks was released on bail just days before allegedly running over the mother of his child with his SUV.

Chisholm has been under intense criticism for the bail recommendation, having previously spoken of his desire to reduce jail populations, and even conceded that the policy would likely result in deaths

Chisholm has called it ‘inappropriately low’ given the circumstances of the crimes Brooks was facing and his extensive prior criminal history. 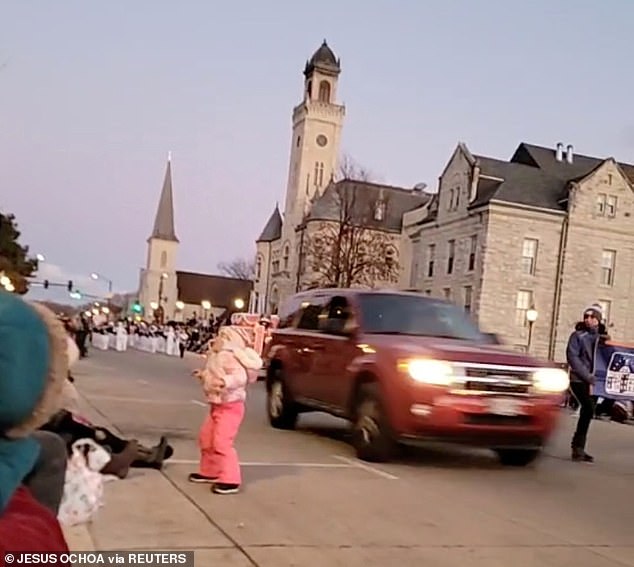 Police allege that Brooks was behind the wheel of the red SUV that plowed into parade-goers in Waukesha, a suburb outside Milwaukee 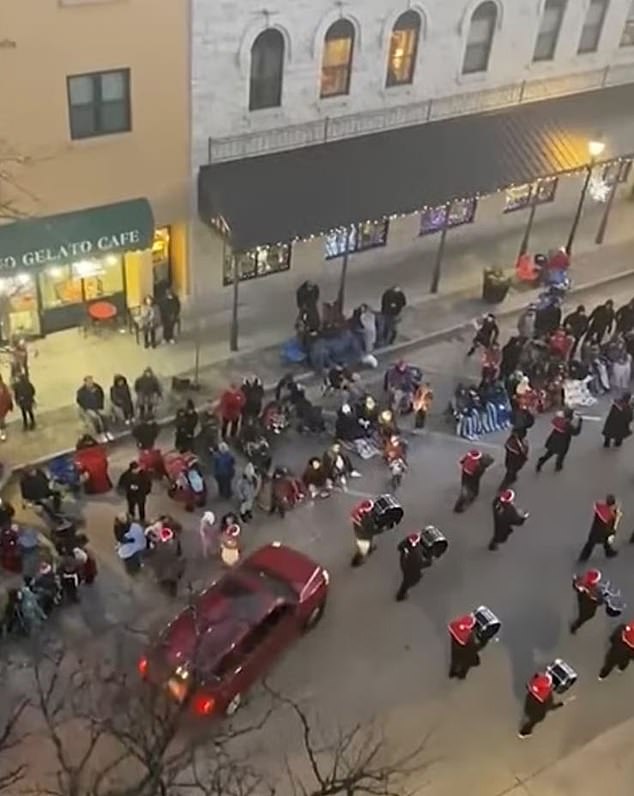 
Earlier this year, Evers launched an investigation into Eau Claire County District Attorney Gary King, also a Democrat, over alleged sexual harassment in the workplace after receiving a complaint from King’s former colleagues.

King resigned before the investigation concluded.

Chisholm said Grasso, who set the $1,000 bond Brooks was freed on two weeks prior to the parade massacre, had looked at his most recently posted bail of $500 and decided to double it.

He claimed she didn’t have risk management computer data available to her that could have kept Brooks behind bars.

‘You had a young (assistant district attorney) trying to do the very best she could under really difficult circumstances and she made a mistake,’ Chisholm said during a Milwaukee County Board Judiciary and Public Safety Committee hearing. 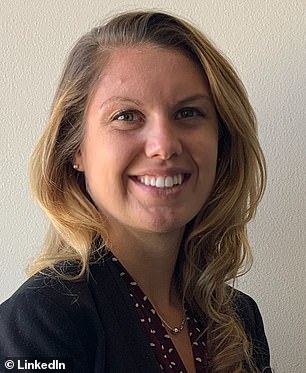 The district attorney has been scrutinized over the low hit-skip bail amount since Brooks was arrested and charged in the parade incident.

‘That is a decision on its face … that I believe was inappropriately low given the context of what we knew about the defendant,’ Chisholm said.

‘That’s human error. It set in motion a chain of events that resulted in a tragedy. Again, I’m not trying to lessen our responsibility for that, but that’s it.’

Chisholm noted that Grasso did not have access to the defendant’s pretrial risk assessment that looks at several factors, including prior convictions, when she made the decision to set Brooks’ bail because it had not yet been uploaded into the system, CNN reported.

The DA, who has a history of trying to reduce incarceration and the number of suspects freed on cash bail said he was angry and ‘extraordinarily saddened by the circumstances that have impacted so many people’ in Milwaukee County and reiterated that higher cash bail should have been recommended for Brooks. Grasso’s supervisor, Carole Manchester, has also been slammed over the low bail amount.

‘I put the finger on myself and that’s my obligation, that’s my responsibility,’ Chisholm said, adding that the risk assessment system was in place when Brooks was released.

‘There was a public safety assessment that was done that characterized this situation as a high-risk situation. Our default position in this case because of the laws in Wisconsin is that we recommend higher amounts of cash,’ he said, explaining the protocol that ‘should have been followed.’ 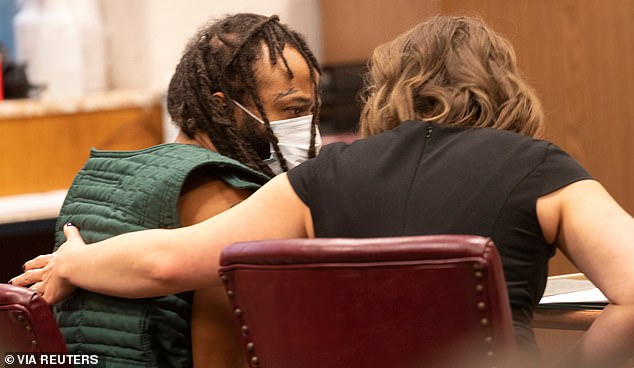 Brooks (pictured in Waukesha County Court on November 23) faces six counts of first-degree intentional homicide in the Waukesha parade incident, with additional charges likely. No possible motive has been given 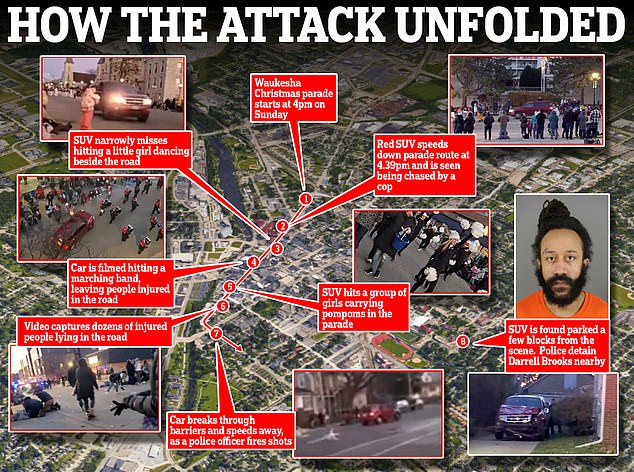 The Christmas parade began on Sunday, Nov. 21 at 4pm, with participants starting at Main St. and Whiterock Ave. It was always intended to be a short parade, ending half a mile away at the northeast corner of Cutler Park. At 4.39pm, the red SUV is filmed speeding down Main Street. It smashed into the crowd, and sent bodies flying, before carrying on down towards the end of the parade, where the car broke through barriers. The SUV was found less than five blocks away and the driver was taken into custody but it’s unclear exactly where

Court records show Brooks was charged with endangerment in Milwaukee County in July 2020 after he allegedly fired his gun at his nephew.

He was set to stand trial in February but Chisholm’s office had to push the proceeding back as it struggled with a backlog of cases due to pandemic-induced courtroom closures.

Since prosecutors couldn’t provide him with a speedy trial, they reduced his bail from $7,500 to $500. He posted that in March.

On November 5, weeks before the parade, he was charged with endangerment again, this time for allegedly running over the mother of his child with his SUV.

Brooks was assessed as a high risk to reoffend, but the prosecutor who handled his initial appearance still sought the $1,000 cash bail. He posted it on November 19.

The alleged killer said he has felt ‘demonized’ and ‘dehumanized’ by the court proceedings but his ex-girlfriend offered little sympathy.

‘It was a monstrous act and it’s completely irredeemable,’ the woman told Fox News. ‘I’m mortified and devastated and have lost sleep for days over this. Obviously, I wish it did not happen.’

The woman said her teenage son, who has not seen his father in more than a year, also felt heartbroken by the senseless attack.

She claimed that Brooks had a history of mental health issues and was on medication, and that her son only had irregular contact with him for the last decade.

According to court papers obtained by FOX, Brooks owns his former partner $41,000 in back child support, but the woman says the $151 monthly payment Brooks is supposed to pay ‘isn’t going to make or break us.’

The network reported she has a ‘successful career’ but did not specify what industry she worked at.

‘[Brooks has] always been in and out of jail — he hasn’t been present,’ she said. ‘I raised my son without him.’

The DA’s office has taken heat for setting the low bail, with critics saying he essentially enabled Brooks to attack the parade.

Chisholm and the county’s chief judge, Mary Triggiano, also tried painting a picture of a Milwaukee County court system that has been limping along since the pandemic struck.

Triggiano noted that the county is dealing with a backlog of 1,600 felony cases and 3,100 misdemeanor cases. Chisholm said the jail has a capacity of 920 inmates and is currently housing about 890, including 175 awaiting trial in homicide cases and 100 awaiting trial for first-degree sexual assault alone.

‘In this particular case, the ADA didn’t make a decision just in a vacuum with lots and lots of time to assess it,’ Chisholm said.

‘It doesn’t excuse it, but it puts it into context when you’re dealing with high volume triage, trying to sort what the most serious offense is, just trying to get the case in the system and move on to the next one, sometimes errors are going to occur.’

He added: ‘I want to make it clear that there are explanations for what happened. There are no excuses.’

Cornwall approved the low bond for Brooks during his arraignment for the alleged hit-and-run. Cornwall, who has served as commissioner since 2005, has a history of low bonds, Fox News reported.

On the same day he set the $1,000 bond for Brooks, he also set bail at $500 for a man accused of strangulation, battery and domestic violence. The day before he set bail at $1,000 for a woman charged with three felonies, including child abuse.

In 2006, the commissioner set bail at $100,00 for a foreign exchange student accused of a sex crime. Cornwall didn’t require the man to surrender his passport and he fled to China where he was later arrested on and unrelated charged and extradited back to the United States.

Similarly, Chisholm is known for his push to end cash bail, saying it’s not fair to poor defendants.

He wants to implement a new system in which only violent offenders are jailed until trial. That’s left him walking a fine line between angry residents who hold him at least partly responsible for the carnage at the parade and progressives looking to reduce incarceration rates.

The district attorney is also being criticized for a comment he made to the Milwaukee Journal-Sentinel in 2007, arguing the state’s risk assessment system could not ‘perfectly predict’ who might commit violence.

‘Is there going to be an individual I divert, or I put into a treatment program, who’s going to go out and kill somebody? You bet,’ he said at the time.

He also argued in favor of programs that reduce recidivism, such as alternatives to incarceration.

In Wisconsin, defendants are screened with a pretrial risk assessment that looks at several factors, including their prior convictions, to evaluate the risk of them failing to appear in court or their likelihood to commit another crime.

Judges and court commissioners are then given this risk score, along with recommendations from the defense and prosecution, to aid in setting bond and release conditions. 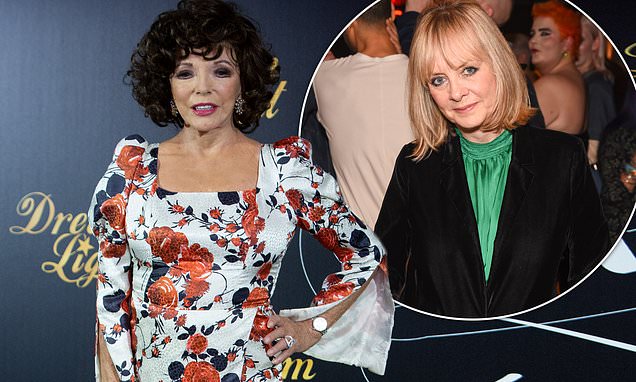 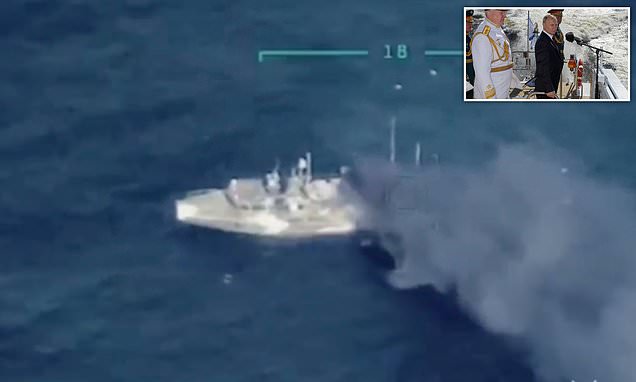 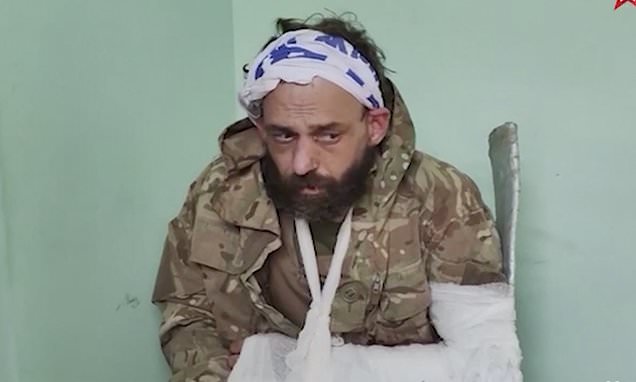 Russian propagandists parade another captured British fighter on TV after being 'shot and beaten' - as three international volunteers from America, the UK and Denmark are killed in two daysAndrew Hill, a father of fo... 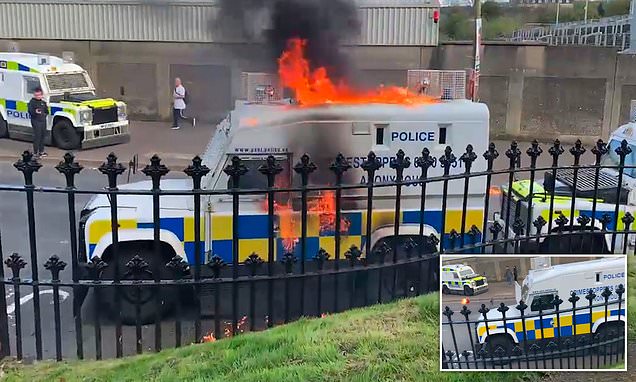