When doctors said my baby girl would never walk, my heart shattered’ 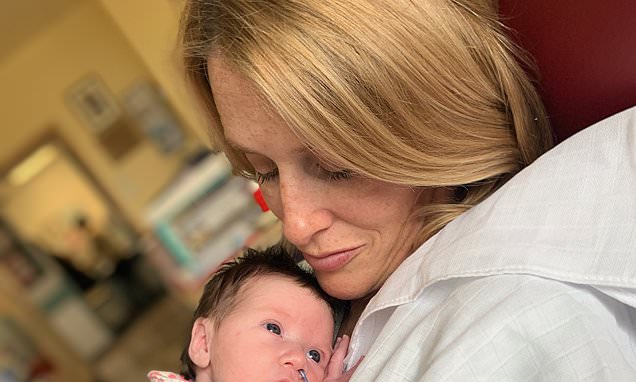 ‘When doctors said my baby girl would never walk, my heart shattered…but they didn’t know what a fighter she is’

In a heart-wrenching feature for YOU two years ago, Flora Watkins revealed how her joy turned to fear and anguish when she found out her newborn baby Romy had cerebral palsy and would never lead a ‘normal’ life. But incredibly, Romy has defied all expectation 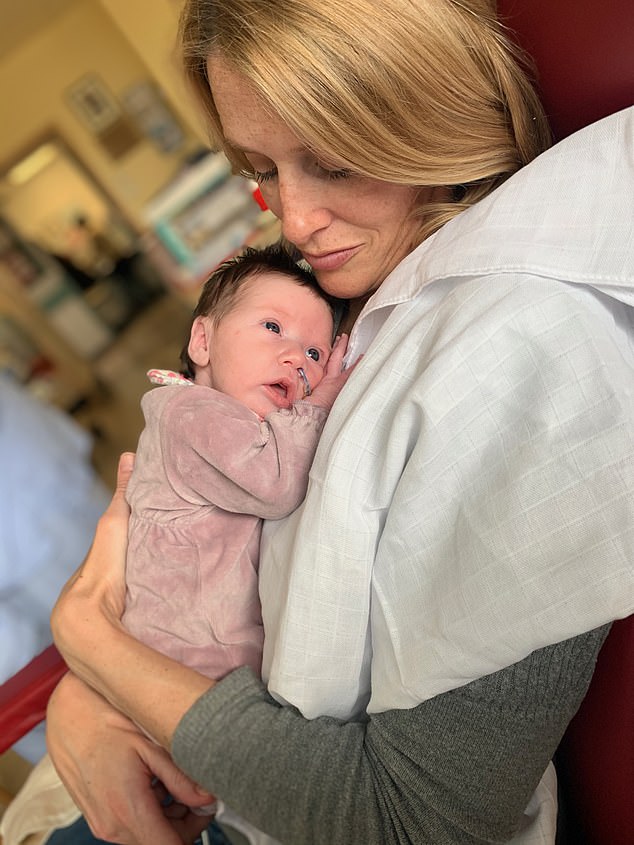 Are you ready?’ I whispered to my daughter, holding out my hands. She nodded her curly haired head while laughing – she is always laughing – and wrapped a pudgy fist around each of my index fingers. ‘Then in we go,’ I said, pushing open the door to the doctor’s office. Romy had a new pair of shoes for the occasion, shiny rose-gold sandals, and marched in proudly taking high, deliberate steps like a show pony.

Romy giggled as the doctor jumped up in surprise and came round the front of his desk. She took her hands away from mine, stood swaying for a moment, before plopping down heavily on her gingham-clad bottom, then scooting off on all fours to explore the room. ‘That is wonderful to see,’ Romy’s doctor said, visibly overcome. ‘That is really, really wonderful.’

It should all have been so different, you see. Because Romy was never supposed to walk. Due to the pandemic, my husband Nick and I hadn’t seen Dr Harris, her paediatrician, face-to-face for more than 18 months. The last time we’d seen him, she was a tiny bundle and was being discharged from the neonatal intensive care unit (NICU) at a big London hospital, where Romy had spent the first 28 days of her life.

I’ll never forget his last words to us: ‘You’ll take her home and it’ll seem like you have a normal baby… for a while.’ Romy’s life began in the most traumatic and shocking way (which I recounted for YOU magazine in November 2019). Born by planned caesarean section after a textbook pregnancy, she was floppy and unresponsive in the delivery room. Initially it was thought that the anaesthetic I’d been given had affected her. But Romy failed to respond to treatment. Then the doctors realised she was having seizures. It was a bleakly terrifying time. I have never cried so much or felt so frightened and helpless. We couldn’t even hold our much longed-for daughter as she was enclosed in an incubator with tubes down her throat, cannulas piercing her hand and foot and electrodes under her scalp. Her brothers, then aged four and five, who’d been fizzing with excitement about the new baby, had to be kept away, fobbed off with lies we desperately wanted to believe ourselves but couldn’t. ‘Your sister’s not feeling very well. She’ll be home soon.’ 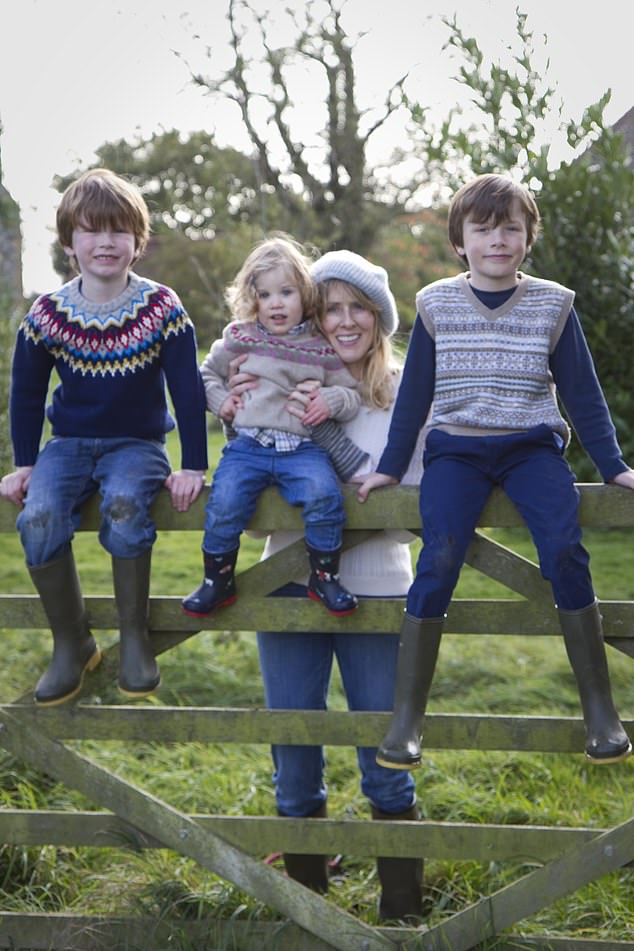 An MRI scan of Romy’s brain gave us some answers but left many, many more unknowns. Either during or shortly before her birth, Romy had suffered a stroke when pieces of the placenta broke off and caused a blockage in her brain. Grave-faced consultants explained gently what this meant. There was extensive damage to the right-hand part of her brain that controls movement – resulting in a lifelong condition called hemiplegia. She would have stiffness and weakness down her left side. She might have learning difficulties and develop epilepsy. ‘You realise it’s cerebral palsy, don’t you?’ said Nick after they’d gone. I suppose they thought we couldn’t cope with that label just then. Nick and I held each other, racked with sobs. How had this happened to our baby? Why her? ‘I just want her to be perfect,’ Nick wept, ‘to have a normal life.’ It might still be possible, we told ourselves, clinging desperately to the idea of our baby we’d had before her birth.

But there was worse to come. Another expert came to look at Romy’s scans. This one didn’t have soft words and a bedside manner. The brain damage on the scans was so extensive, she explained briskly, that our daughter would be quadriplegic. She’d likely need a wheelchair and have severe learning difficulties. Her words had the force of a bomb going off within our little family. Plans and dreams reduced to scorched earth, our daughter’s future all darkness and uncertainty.

Yet when I went back and stroked my baby through the portholes of her incubator, felt her warmth and humanity, I did see a perfect little girl. Her fingers on the hand weakened by the extensive brain damage gripped mine. Our love for her was no less fierce and proud – perhaps even more so.

Nick and I coped with Romy’s diagnosis in different ways. His was: how can we fix this? Guided by Romy’s amazing neurologist and paediatrician in the NICU, Nick read everything he could about brain plasticity in infants. We learned how the brain can make new connections, if it is stimulated in the right way. We sang and read to Romy in her incubator, just as we would have done if she’d been at home and ‘normal’. Her brothers brought Goodnight Moon and Little Grey Rabbit to read to her after school. 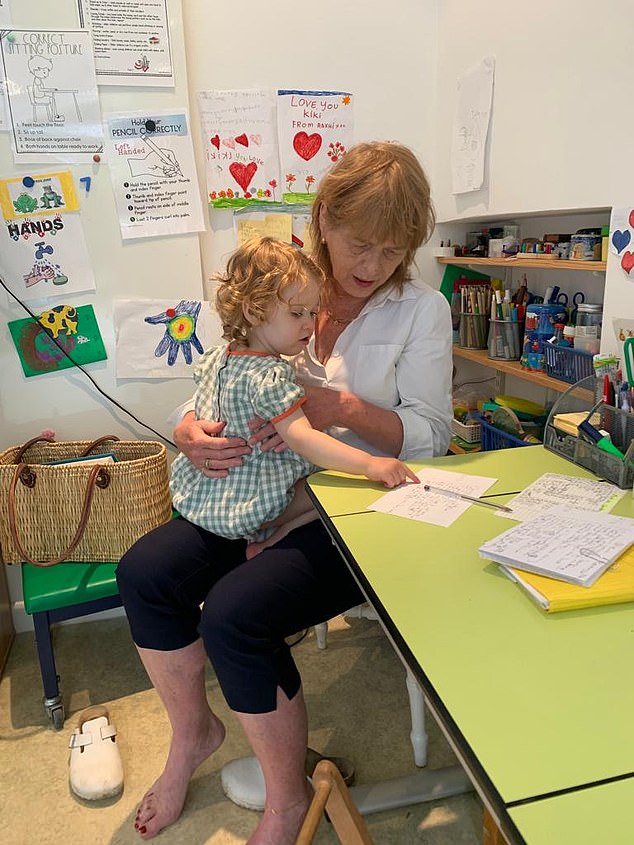 Romy with physiotherapist Kiki – Flora credits her with helping Romy to thrive.

I wrote about my daughter’s plight for this magazine and was overwhelmed by the outpouring of love and warmth from readers – and buoyed up by the positive stories from mothers of children who defied their initial diagnoses. Babies who’d suffered strokes and bleeds on the brain had gone to Cambridge University, competed at para dressage for their country, had successful careers, gone on to have families of their own.

Of course, there were children whose disabilities had been more severe, who needed mobility aids, had compromised vision or learning difficulties, but thanks to the positivity of their parents, they too were living the fullest, happiest lives and bringing great joy to their families. ‘What is “normal” anyway?’ asked one friend, whose son has type-1 diabetes. ‘All of us have something.’

One correspondent turned me on to a Mary Oliver poem that became a sort of mantra for me in the early days: ‘I want to believe that the imperfections are nothing – that the light is everything.’ As soon as Romy opened her eyes, once anti-seizure drugs were reduced, she seemed to turn towards the light, taking everything in with her deep, intelligent blue eyes. Her extraordinary doctors and nurses in the NICU held our hands – literally and metaphorically – during those early days. 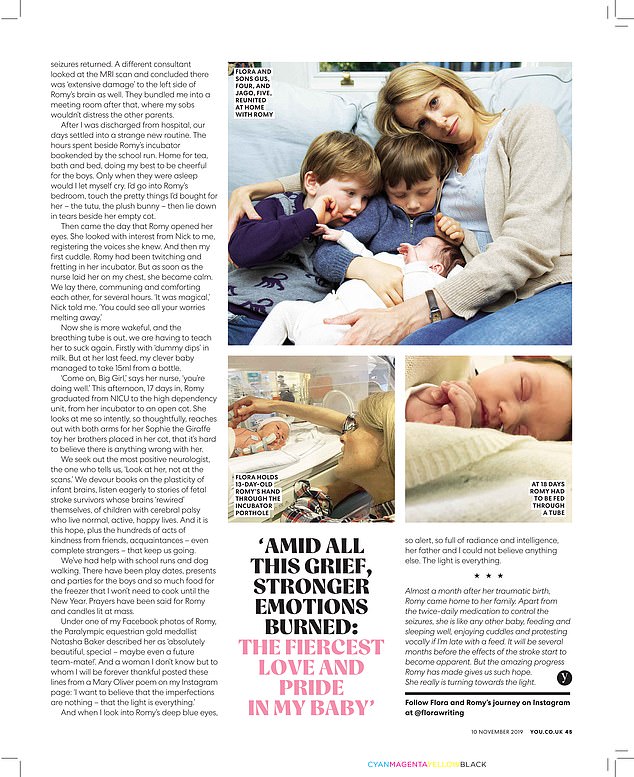 Flora first wrote about Romy in YOU in November 20

Dr Harris couldn’t have been kinder, inviting Romy’s brothers in for a tour and answering their questions. Whenever I was feeling hopeless, Romy’s wonderfully positive neurologist Dr Ramesh would say, ‘Look at the child not the scans.’ His words became another mantra for us to repeat.

We were warned that Romy would seem a ‘nor mal’ baby at first but that the cerebral palsy would mean she’d be late hitting her milestones (smiling, rolling over, sitting, crawling, etc) or might not reach them at all. Yet bang on six weeks, Romy’s sweet face stretched into a broad smile, quickly followed by deep belly laughs at her big brothers’ antics, as they competed to entertain her.

The support we received from friends and family was amazing. But one unexpected consequence of Romy’s traumatic start to life was the new friendships. Women I’d met just once or twice, who’d been inside a NICU with their own babies, got in touch with empathy, kindness, practical advice and presents for Romy. These are friendships I now treasure.

Several people who’d reached out through my YOU magazine article recommended that I take Romy to Kiki’s Children’s Clinic which, happily, was close to where we were living at the time in South London. Its owner, physiotherapist Kiki von Eisenhart-Goodwin, came into our lives when Romy was 12 weeks old and galvanised us with her energy and expertise. I filmed that first session; you can hear my sobs as Kiki points out the areas where Romy isn’t developing as she should. ‘But we bombard her hemi side with physio,’ she stressed, showing how to raise Romy’s arms on a pillow so she could reach her baby-gym, encouraging her to grasp a rattle with both hands.

It is Kiki whom I largely credit with Romy defying those early prognoses. By stimulating and encouraging the use of Romy’s hemiplegic limb (and showing us how to do so at home) our daughter rolled over, sat up, crawled and eventually walked within the ‘normal’ parameters. Kiki has become a family friend – just one of the many life-enhancing people Romy has brought into our lives. There’s the team at Small Steps, a charity in Richmond-upon-Thames, that offers free weekly sessions to pre-schoolers with mobility, sensory and other challenges. Then there was the renowned speech therapist Heather Bouchier Hayes. She was terminally ill when I took Romy to see her but dealing with her diagnosis with wit and humour. Heather impressed on me the importance of signing using the Makaton system to support speech as it is often delayed with cerebral palsy. ‘Romy’s a joy. Try not to worry. Make sure you enjoy her,’ she’d say.

Romy’s joy is infectious. Whether that’s because of her disability, or in spite of it, or because she’s been in receipt of so much love, I don’t know. Nick even asked a consultant once if it was ‘normal’ for a child to be this happy. She smiles and laughs and waves at strangers and dogs and cuddles her teddies and dolls. She has great empathy for others and will often try to comfort another child who is crying.

Her boisterous brothers have astounded me in the way they interact with her. They’ll gently hold her right hand out of the way, to encourage her to pick up toys or pieces of fruit with her weaker hemiplegic hand. They will look up new Makaton signs for her on YouTube. I’ve found it very emotional seeing the contestants on Strictly signing with the deaf celebrity Rose Ayling-Ellis. Romy’s condition has made me acutely aware of the need for diversity and inclusivity, for normalising – that word again! – disability and breaking down barriers.

The other day, Romy’s eldest brother Jago said, ‘It’s like she’s forgotten she’s got cerebral palsy,’ as he watched her scrambling up the stairs at bath time. As far as she’s concerned, she doesn’t have any limitations.

I feel so privileged that Romy has taught us this and so blessed to have her as my daughter. Romy has made me a better person: gentler, more thoughtful and sensitive. I’ve had to slow down because of all her appointments and because of her taking a little longer to reach her milestones. It means I see things through her eyes, take some of the joy that she does in the little things: a robin on the bird feeder, puddles in the lane, the cherry on the cake.

I said I’d never cried as much as when our daughter was born with a disability, but two years on, I can honestly say that I’ve never laughed as much, either. She is perfection. As Leonard Cohen put it in his song ‘Anthem’, ‘There is a crack in everything. That’s how the light gets in’ 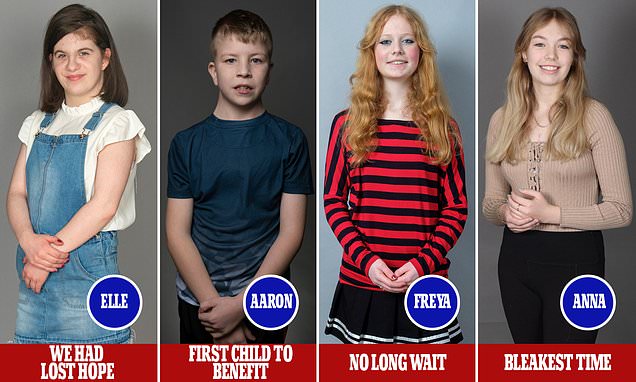 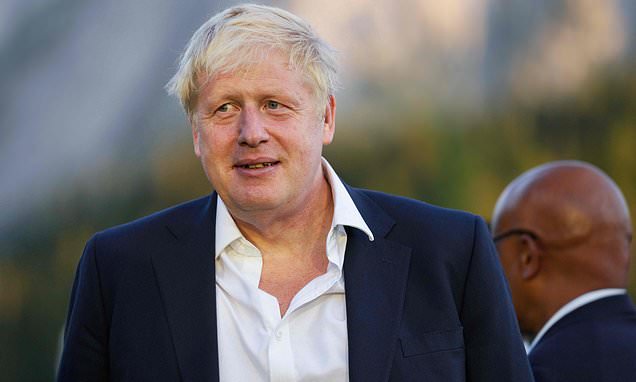 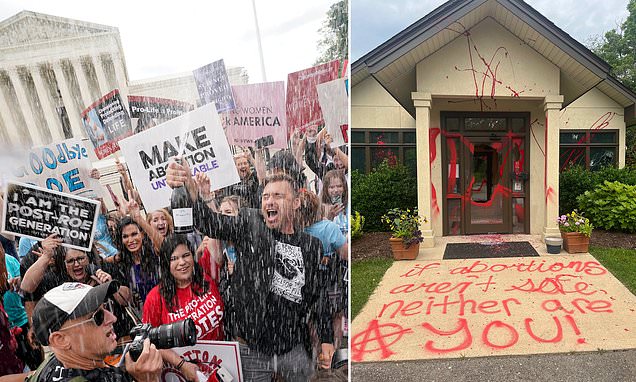 America’s never been more riven. And the future looks frightening

TOM LEONARD: America's never been more riven. And the future looks frightening Just days before the historic ruling that threatens to tear apart an already fiercely divided America, it emerged that employees at abort... 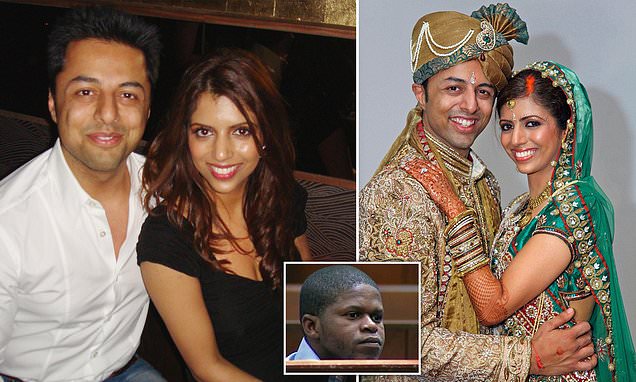 EXCLUSIVE: Anni Dewani's 'lowlife' killer persuaded doctors that he was seriously ill before he was freed having served half of his 18-year sentenceTaxi driver Zola Tongo was convicted for his part in murder after he...