Wingsuit pilot flies in and out of an active volcano 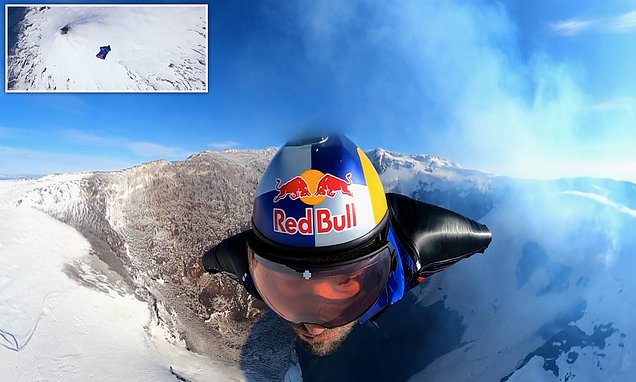 This is the heart-pounding moment a wingsuit daredevil soared through an active volcano after skydiving from a helicopter flying 11,000ft in the air.

Sebastián Álvarez, who began his career flying for the Chilean Air Force, teamed up with fellow skydiver Dani Roman in order to fly through the 200m-wide crater of Villarrica, also known as ‘the devil’s house’, in Chile.

Footage shows the extreme sports enthusiast take multiple attempts to execute his mission before eventually managing to fly in and out of the smoking volcano at a speed of over 100mph.

During the clip, which was shared on November 29,  Mr Álvarez prepares for the dangerous feat ahead and tells viewers this is ‘the most complicated project’ he has worked on. 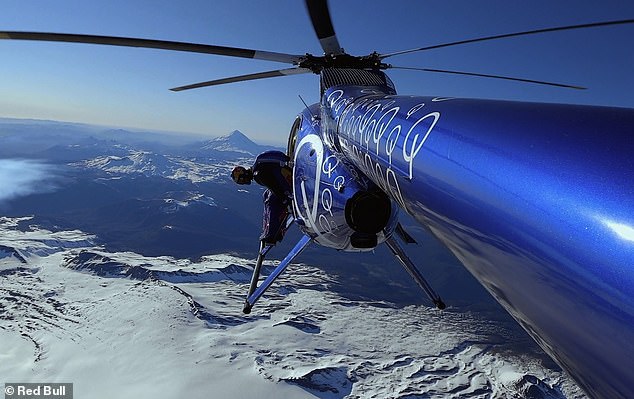 Sebastián Álvarez, who began his career flying for the Chilean Air Force, sits at the edge of the helicopter before taking the plunge 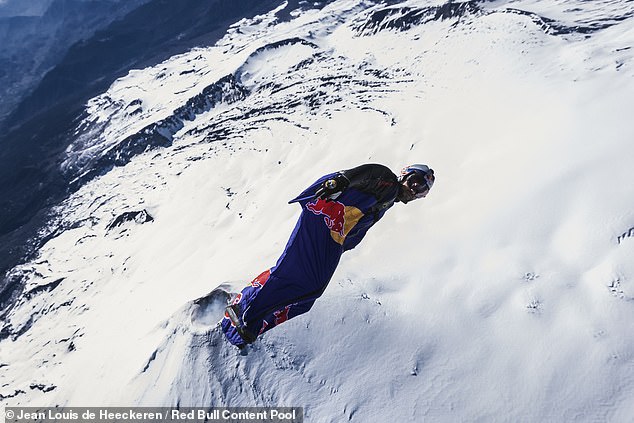 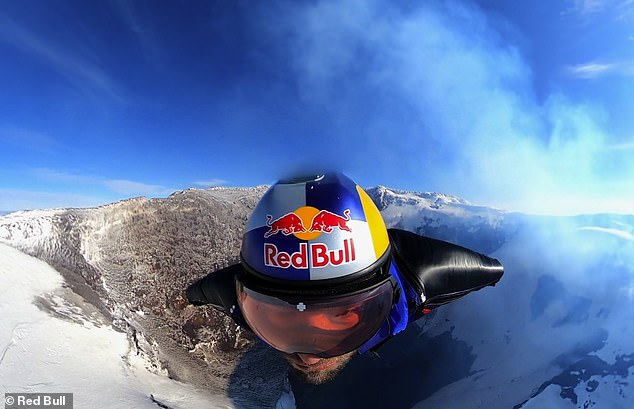 The adrenaline junkie flies through the crater of Villarrica, also known as ‘the devil’s house’, in Chile

He says: ‘It’s definitely been the most complicated project that I’ve worked on due to the unpredictable factors.

‘For me the mind work was the most relevant aspect, understanding that I  wanted to fly into an active volcano and attempt to get out of it.

‘So there is a moment during that flight I find myself in front of a wall.’

He adds: ‘All factors are controllable or predictable. So there is the human factor which in my case is training and there is the weather factor, which is predictable, but the volcano activity was completely out of our control.

‘One day it could be really active and pulsing lots of smoke and the next day it could be super calm so having all of these variables for one flight is extremely complicated.’

Meanwhile fellow skydiver Dani Roman says: ‘The truth is that when he told me I thought it was insane, right?

‘At the beginning I don’t know I didn’t see it clearly.

‘After some calculation, it seemed to be possible and later I realised it was doable but I still had doubts.’

During his first attempt at the stunt, Mr Álvarez sits at the edge of the helicopter before plunging towards the smoking crater below him.

However his flare, the manoeuvre that allows wingsuit pilot’s to get a final slingshot of speed, is not strong enough and the skydiver cannot complete the stunt. 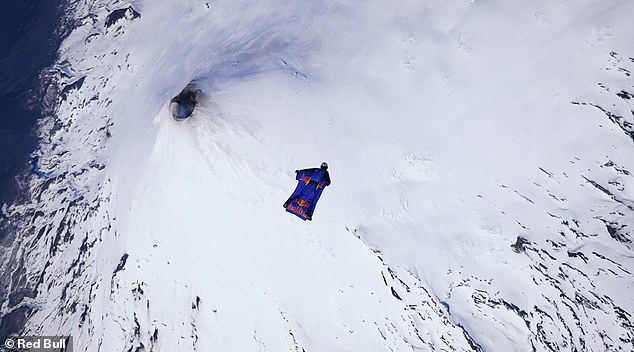 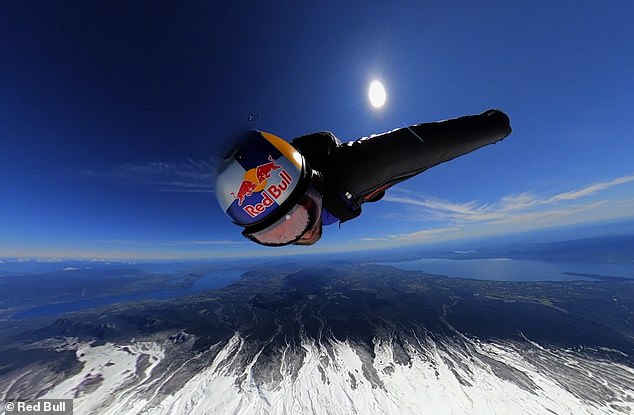 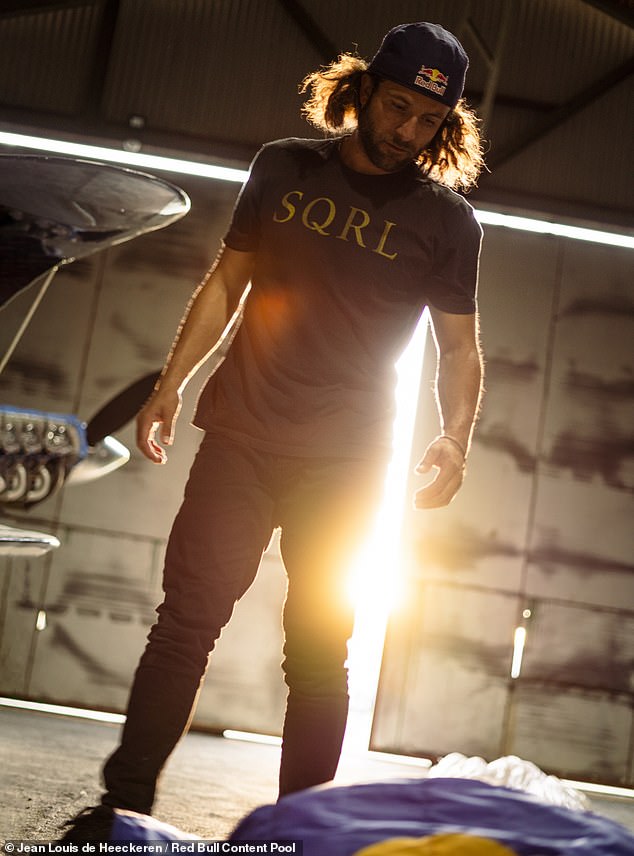 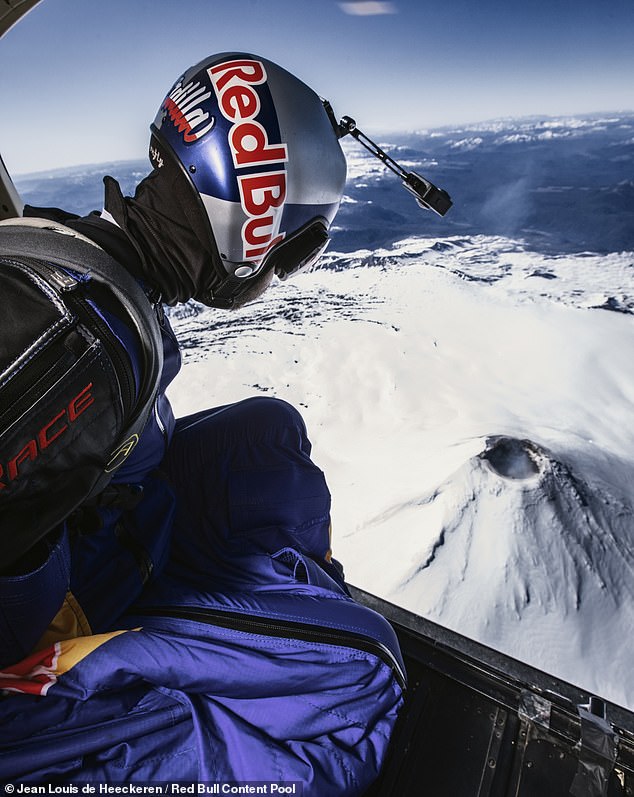 The skydiver, who completed 500 jumps in preparation for his latest stunt, looks out of the helicopter before jumping out

Undeterred, the adrenaline junkie takes to the skies for a second and third attempt but the smoke emitted by the volcano and the winds are too strong and he is unable to complete the task.

The following day, Mr Álvarez flies to a staggering height of 11,482ft before jumping out of the helicopter once more.

The skydiver, who completed 500 jumps in preparation for his latest stunt, is able to gain enough speed and air pressure this time and dips into the crater before flying back out.

Mr Álvarez has also completed a number of other stunts – including passing through the twin towers of Vina del Mar in Chile, BASE jumping from Mont Blanc in the Alps and carrying out a wingsuit flight on Cerro Manquehue, Santiago, Chile. 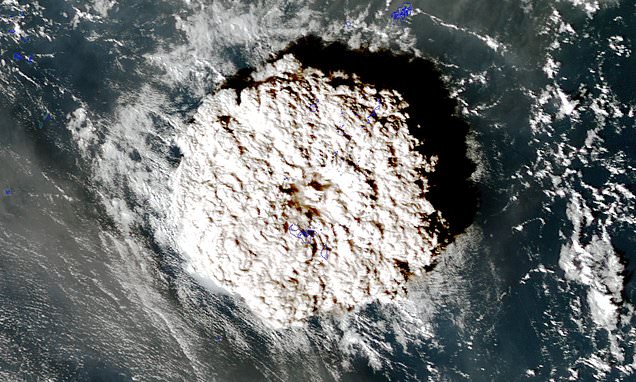 Tonga volcano eruption was one of the strongest EVER recorded

Tonga volcano eruption was one of the strongest EVER recorded: Scientists believe blasts was equivalent of up to 30m tons of TNT exploding - making it stronger than Mount St HelensResearchers compared the scale of th... 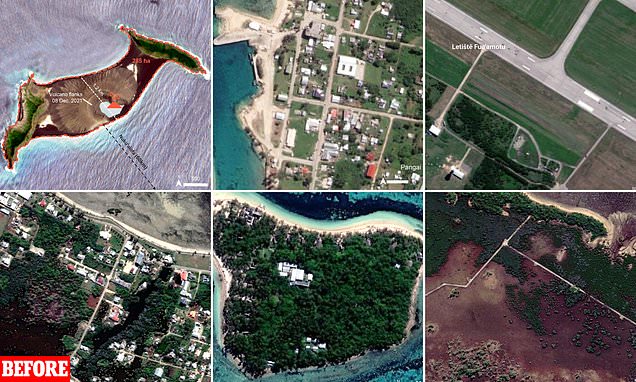 Before and after images show extent of destruction from Tonga volcano

Before and after satellite pictures show scale of devastation caused on volcano and tsunami-hit Tonga as death toll on cut-off island remains unknown with communications still downSatellite images have revealed the e...

'I wasn't worried about myself': Selfless LAPD cop who plucked bloodied pilot from cockpit seconds before high-speed train smashed into it admits the 'timing was unbelievable'LAPD Foothill Division cop Robert Sherock... 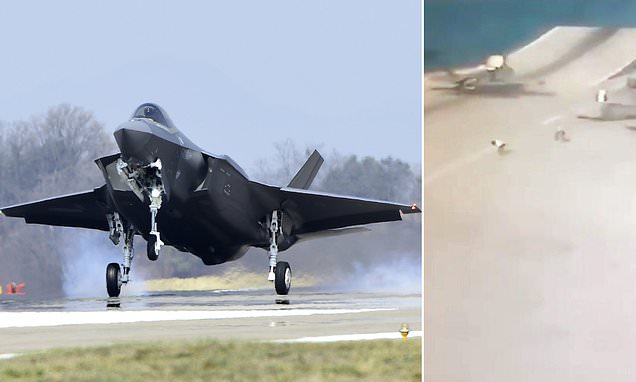