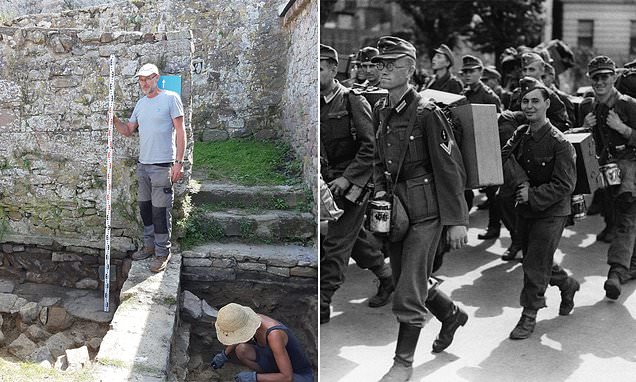 Archaeologists digging up the remains of an ancient Roman tower on the Channel Island of Alderney have discovered that a World War II German bunker was built inside the tower.

The bunker is located at the Alderney Nunnery, a 320 square foot building with rounded corners and towers that was built around 350 A.D.

It is considered one of the most well preserved Roman forts in the British Isles and is located on the same island as the Lager Sylt Concentration Camp, which was uncovered in detail last year for the first time since World War II.

Archaeologist Dr Jason Monaghan, who is leading the dig, told the BBC that the experts found that the bunker was placed ‘exactly inside’ the Roman tower’s 10ft thick walls.

‘We have seen the way the Germans have inserted a personnel bunker exactly inside the old Roman tower,’ Monaghan told the news outlet. 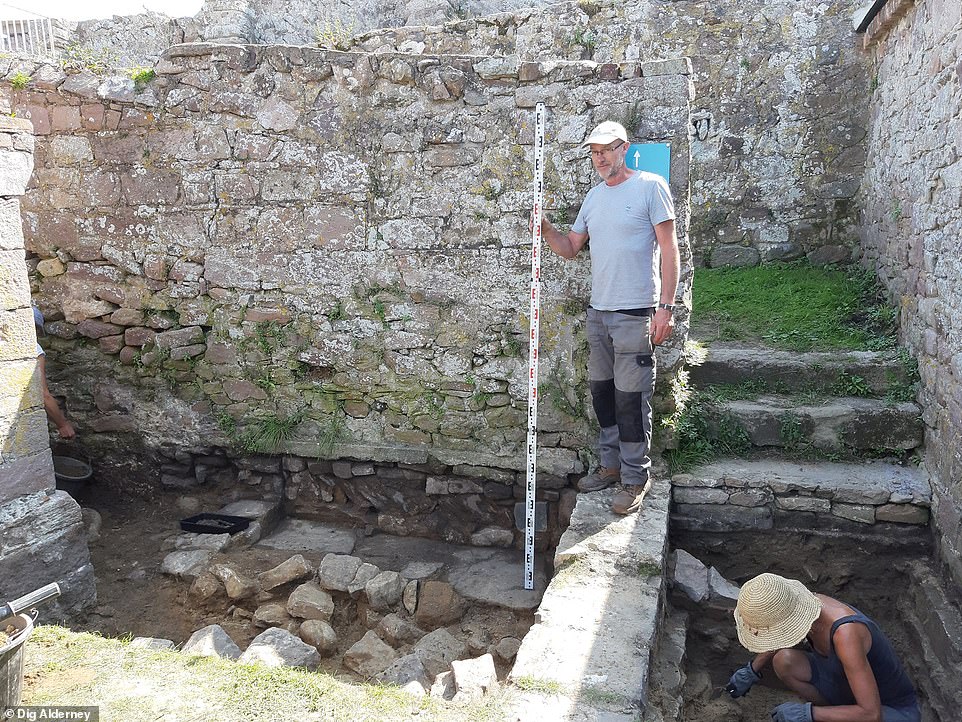 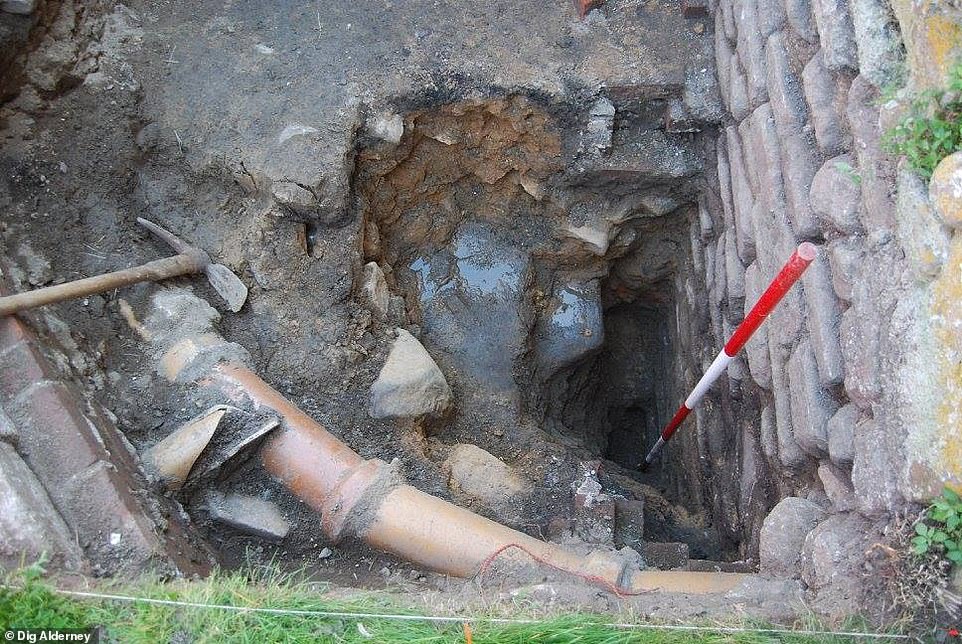 According to Alderney’s travel website, the Nunnery was once occupied by the Tudors, British soldiers and the aforementioned Germans.

There are also remnants of structures from both the Medieval and Napoleonic eras.

In 2011, the ruins of the tower were confirmed to be from the Roman era.

One fact that surprised the researchers is that the ‘Germans built their bunker right up against the Roman stonework,’ Dig Alderney, a charity focused on the archaeology of the island, ​wrote in a Facebook post.

They also found evidence that the Germans took precautions with the Roman tower wall, ‘for whom all that Roman concrete is just extra protection,’ the charity wrote on Facebook.

The archaeologists also found evidence of a German observation post at the outer face of the tower.

Monaghan added that the researchers are looking are how the different occupants intersected with each other, as they look through a ‘whole succession of buildings, drains and mystery walls intersecting each other.’

‘We’ve just come across three floors all on top of each other and we’re just trying to disentangle what eras they come from,’ he told the BBC. 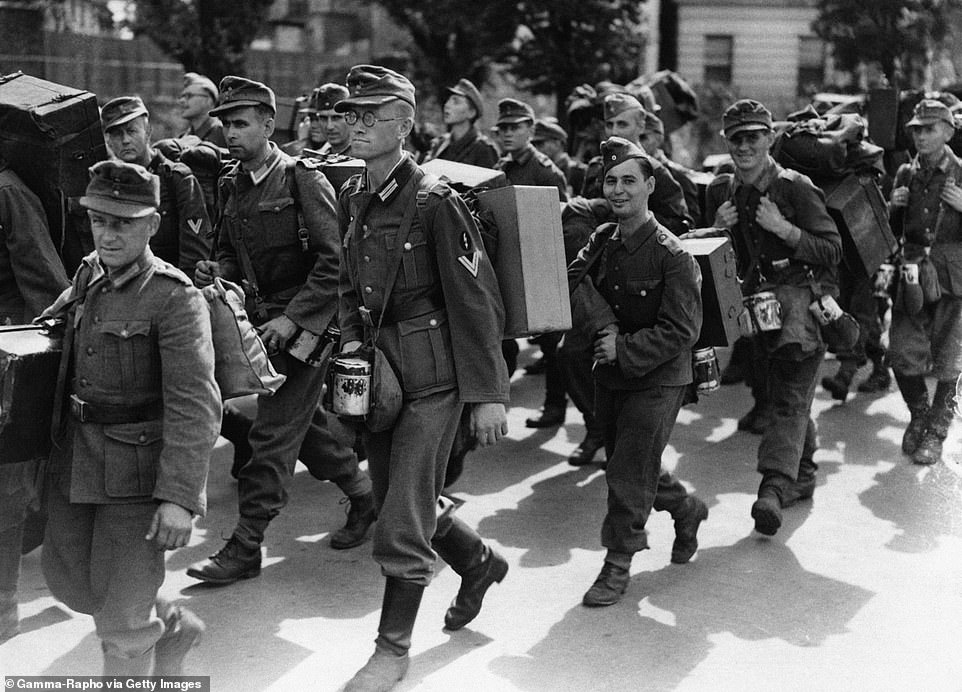 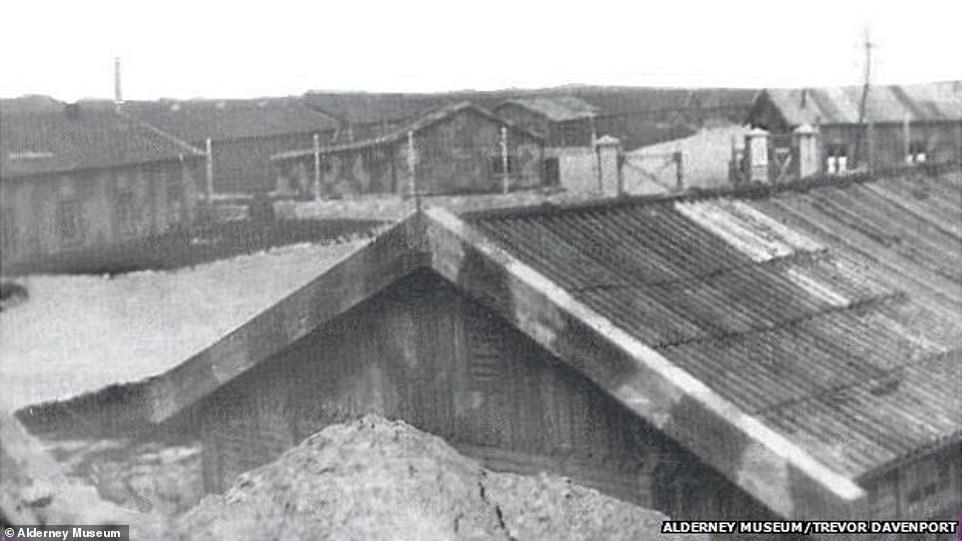 The Lager Sylt concentration camp (pictured), one of the most fearsome of WWII, was located on Alderney 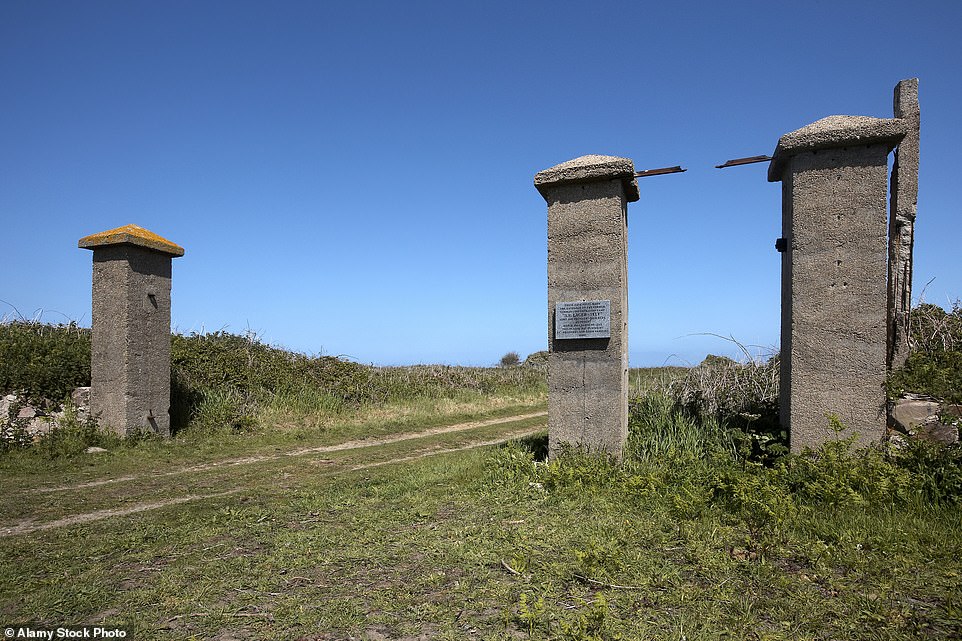 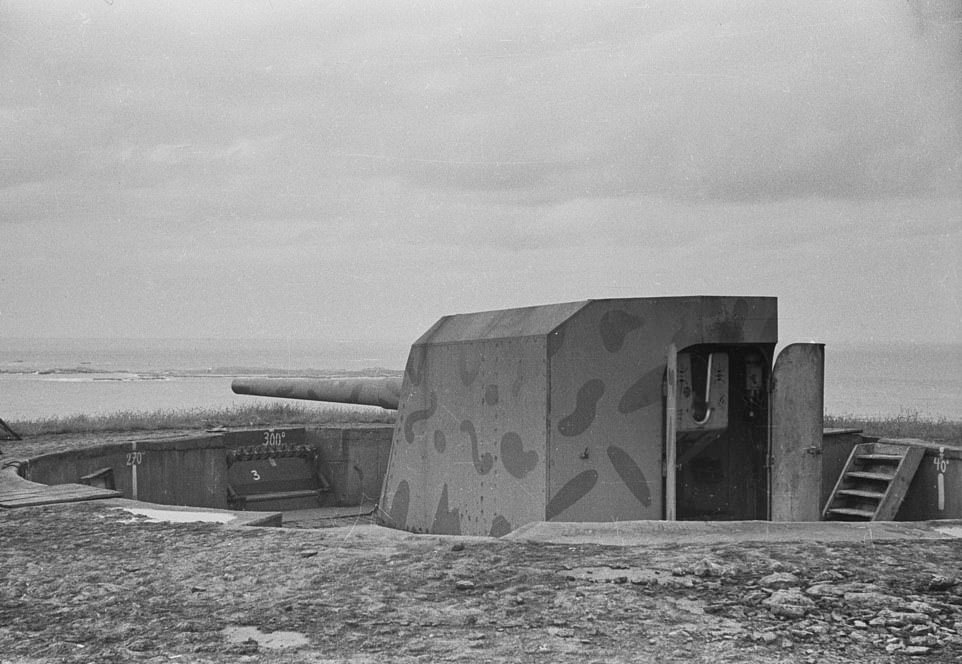 Alderney was home a number of Nazi bunkers, gun emplacements, tunnels, air-raid shelters and other buildings during their occupation from 1940-1945

The island was controlled by the Nazis between 1940 and 1945 during the war.

The entire population of Alderney, about 1,500 residents, were evacuated in June 1940, with most winding up in Britain.

It was the only part of the British Isles that was occupied by Nazi Germany during the war and was considered a stronghold, containing the aforementioned Lager Sylt concentration camp and another, Lager Norderney.

Much of Lager Sylt is now privately-owned and very little remains above ground, after the Nazis destroyed and burned almost all evidence of the camp and its unspeakable monstrosities in 1944.

It was also home to a number of bunkers, gun emplacements, tunnels, air-raid shelters and other buildings.

THE MONSTROUS REPUTATION OF SYLT

Sylt had a reputation as by far the most fearsome camp on Alderney, with archived testimonies speaking of untold brutality and abuse.

Prisoners were killed as sport, their deaths dismissed with a generic death certificate and their mutilated bodies used as decoration atop walls and gates.

For sport, the SS guards sometimes used dogs to force prisoners through security fences. The prisoners were then shot for attempting to ‘escape’. The SS documented many such executions as ‘suicides’.

German soldier Otto Tauber, for example, recalled how four men were bound to the barbed wire fence atop a wall and whipped for killing and eating a lamb.

The gateposts were also a favored place for the SS to perpetrate and display brutality. A former Norderney prisoner explained: ‘at Lager Sylt we saw a Russian, he was just hanging, strung up from the main gate.

‘On his chest he had a sign on which was written: ‘for stealing bread’. Others were left hanging for days and whipped or had cold water poured over them all night until they died, according to archived testimony.

Bodies were left to hang as a warning to others not to commit crimes. Even the German garrison on Alderney were aware that Sylt was a brutal camp, to which access was restricted, the archaeologists conducting the latest research say.

While visiting Sylt in 1943, German corporal Otto Taubert explained that ‘no one [in the Wehrmacht] was allowed to enter the inner [prisoner] compound’. German Lieutenant D.R Schwalm stated that ‘access to the camp was only allowed with the permission of the camp-leader and then only in his presence’.

Historical sources confirm that the SS used food to enforce dominance and control.

Prisoners starved while their food rations were stolen by SS guards, who either ate, sold, traded or kept the supplies for themselves.

One of the prisoner kitchens also became a killing site when, as former Sylt prisoner Wilhelm Wernegau recalled, the cook was strangled by the SS because they did not like his food.

The inmates of the slave labor camp lived their pitiful and short lives in constant fear.

One who against the odds survived recalled being marched to work and a fellow prisoner falling to his knees, unable to walk further.

‘The Germans shot him right there,’ he told The Daily Mail in 2017.

‘Another man was crucified for stealing, hung by his hands. When I got up in the mornings I saw dead bodies in the bunks around me. Sometimes their lips, nose and ears had been eaten by rats.

‘There was a special hut where the corpses were piled. Later, they were taken away, loaded onto trucks and dumped in the sea.

‘We were fed just water with a few bits of turnip floating in it, so life was a constant struggle for food. I found a rubbish heap near to the construction site where I worked and was filling a bag with vegetable peelings and cabbage leaves when someone set a dog on me.

‘It attacked again and again, tearing all my clothing. When it let go, I was beaten with a stick by a German. I was very weak at the time. There were about 500 men in my camp, and at least 300 died while I was there.’ 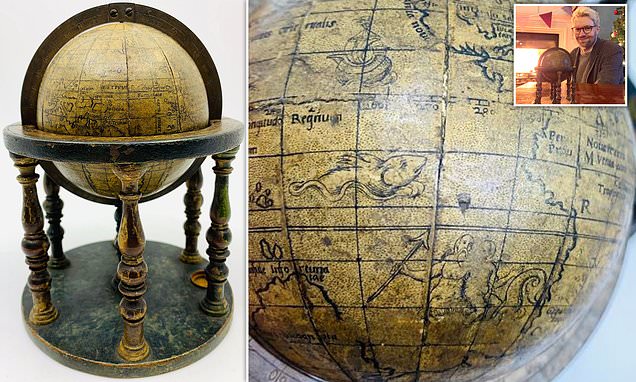 Ancient globe dating back to 1560 that depicts strange sea monsters and a world before Australia was even discovered is set to fetch £30,000 at auctionA globe dating to 1560 is listed for auction with a guide price o... 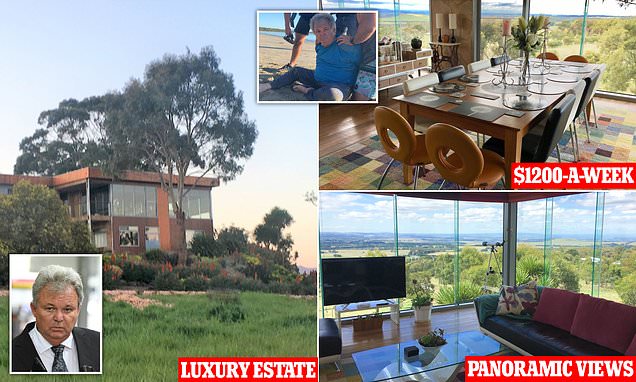 Inside notorious conman's lavish $1,200 a week estate with picturesque views where he spent SIX MONTHS hiding out before being captured by an elite team of 'fugitive hunters'Serial Australian conman Peter Foster was ... 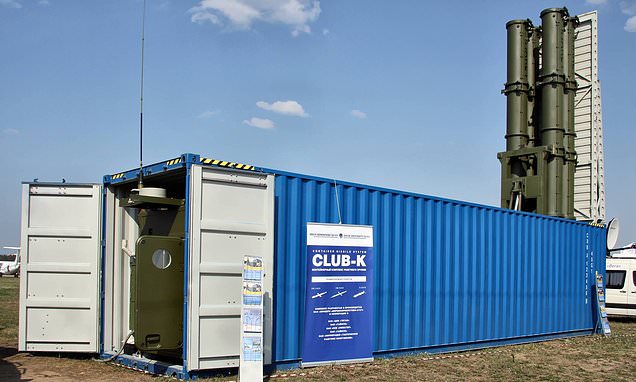